What do two broken bones, a redshirt season, time to reflect and a new attitude on running give you? For Adam Strueby, it gave him a tremendous fifth and final season of running.

Combine that with a 13th-place finish at the CIS Cross Country Championship in November as well as second-team All-Canadian and Canada West first-team all-star honours and you have a story worth telling.

However, the story isn’t that simple.

Imagine this. You are headed into your fourth year of university and during the summer months you end up fracturing your fibula; from running no less. You sit out, take the time off to recover, but end up redshirting your entire season, indoor track as well. Fast forward to that indoor season and it turns out you’ve fractured it again; same foot, different area. This time it’s your second metatarsal. Running comes to a screeching halt.

For Strueby, a fifth-year cross country and track athlete with the Regina Cougars, this was his reality. In the summer of 2015, after weeks of cross-training, he found out he was injured with a fibula fracture.

With a decision at hand, he chose to retain his year of eligibility and redshirt the season.

“I had two races I was able to run indoor without sacrificing any eligibility and before my second race… I actually broke my foot (again),” says Strueby. “It started out as a stress fracture and it ended up breaking right across.”

The redshirt season gave him time off from running, from competing, and he took a step back from the athletics world for a moment. Then, after the pressure was off and he had spent enough time away, he recognized that it was time to come back and step right back in to the sport he loved.

For Strueby, the situation was so much more than just a simple injury; it was a 360-degree turn on training. From previously forcing his way through workouts without a second thought for his physiological foundation, he knew something had to change.

“My first couple years I would always push myself past where I should have… just because that’s what we thought we should do… it was just like year-after-year of bumps,” he adds.

Despite a slow comeback with cold prairie winters and having only an indoor treadmill to train on, Strueby 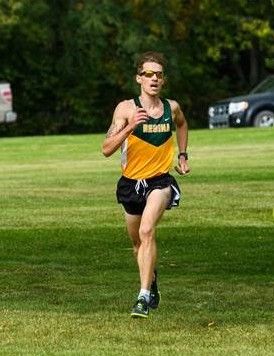 approached this past outdoor cross country season with a new attitude of determination and persistence. If injuries taught him anything, it was to run at a standard that he had confidence in: no overtraining, taking care of injuries, no fractures and consistent times. The season was set.

His coach Bevin Thompson adds to his new approach as well, saying that it was a

“(It was a) turning point in terms of listening to his body,” said Thompson of Strueby’s new approach, adding that he gained a “great appreciation for quality and not just hammering out miles to no end.”

With broken bones behind him, Strueby took full strides to use his setbacks as fuel for this season. His final cross country campaign unfolded tremendously: a first-place finish at the opening Cougar Trot, second at the University of Saskatchewan Open, ninth at the Western Washington Classic and seventh at the Stewart Cup. On the Plains of Abraham, Strueby crossed the line 13th overall in a time of 31:22, ranking him third place within the Canada West division, which also uses the national meet as its conference championship.

As the Cougars track and field season begins, Strueby looks forward to completing his varsity career on an equally-high note.

“It took me five years to learn (all of this),” Strueby says, reflecting on his season. “But now that I know it, it has definitely paid off.”