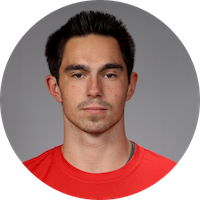 What attracted you to University of Calgary?

University of Calgary has a great business school and running program. I had an opportunity to train with the Dinos during my final year in high school, and they were very welcoming to me. I knew that I would love my running experience with the team, and this was a big factor in my decision to stay.

What’s your favourite memory, and your greatest athletic achievement as a U SPORTS student-athlete?

My favorite memory as U SPORTS student-athlete was grabbing the team silver medal at the U SPORTS Cross Country Championships last season. We always knew that we had the potential to be a medal contender, but nobody other than ourselves believed we could get onto the podium. Everybody stepped up and delivered. The excitement and emotion upon finding out we had gotten silver was such an incredible feeling, and I will remember that day forever.

Where are you hoping your path will take you after university?

I want to stay involved in sport in some form. Whether it be in sports marketing, sports management, or any other job. Sport is huge in my life and I am hoping I can stay involved with it after university.

Who’s had the greatest influence on your athletic career?

My brother Christian has been the biggest influence on my athletic career. He has cerebral palsy, and I grew up swimming with him. Even though it was challenging for him to swim, he always had a smile on his face and tried his best every workout. His influence was huge at a young age, and it is because of him that I am still in sport.

Who is someone in the sports world, past or present, with whom you’d love to have dinner with? Why?

Watching Michael Phelps win eight gold medals at the Beijing 2008 Olympics made me realize my goal of making it to the world stage. I’d like to have dinner with him to learn about his approach to everyday training and how he deals with such extreme pressure.

What is your pre-game ritual? Do you have any superstitions/idiosyncrasies around preparing yourself for a game?

I typically listen to music while getting my stuff together before heading to the race course. Right before the race, I will shake my legs out while staring at the ground. It helps me get focused and calms down my nerves.

What’s your go-to song to get pumped up for practice or a game?

No Love by Eminem and Lil Wayne

If you could try another sport, what would it be and why?

I’d want to try bobsledding. I wouldn’t want to drive the sled of course, but going down the track that fast would be a thrill and a half.

What’s the most embarrassing thing that’s happened to you as an athlete?

When I was little I competed in one of my first triathlons in Kelowna. It was the Kids-of-Steel national championships. I was winning and had a solid gap on second place on the run portion. Unfortunately, I got a little too excited, and ran through the finish line after one lap, when the run course was two laps. I looked back a while later, and realized what had happened. I went to the official and told her to disqualify me. I was gutted. Apparently counting to two was too much to handle at that age.