It’s March 2017, and the Guelph Gryphons women’s field hockey team heads into the dressing room for a meeting after their morning practice.

Oliver Lane hands each of his teammates a personalized card. After allowing them time to read, he starts answering questions. By meeting’s end, his teammates begin calling him Oliver and using the pronouns he and him — another step in his transition.

What’s more, the meeting sets in motion a move from playing to coaching that is still leaving its positive mark on the team.

Lane began playing women’s field hockey in Grade 11. It was a late but fast-tracked start to a high-profile career in the sport after he joined a high-performance academy in Guelph, managed by Gryphons head coach Michelle Turley.

Quickly finding his way into the women’s provincial program, Lane then moved into familiar territory in university as he joined Turley’s Gryphons squad in 2014. In his first year, he would be named the Ontario University Athletics (OUA) Rookie of the Year and lead the Gryphons in goal-scoring. 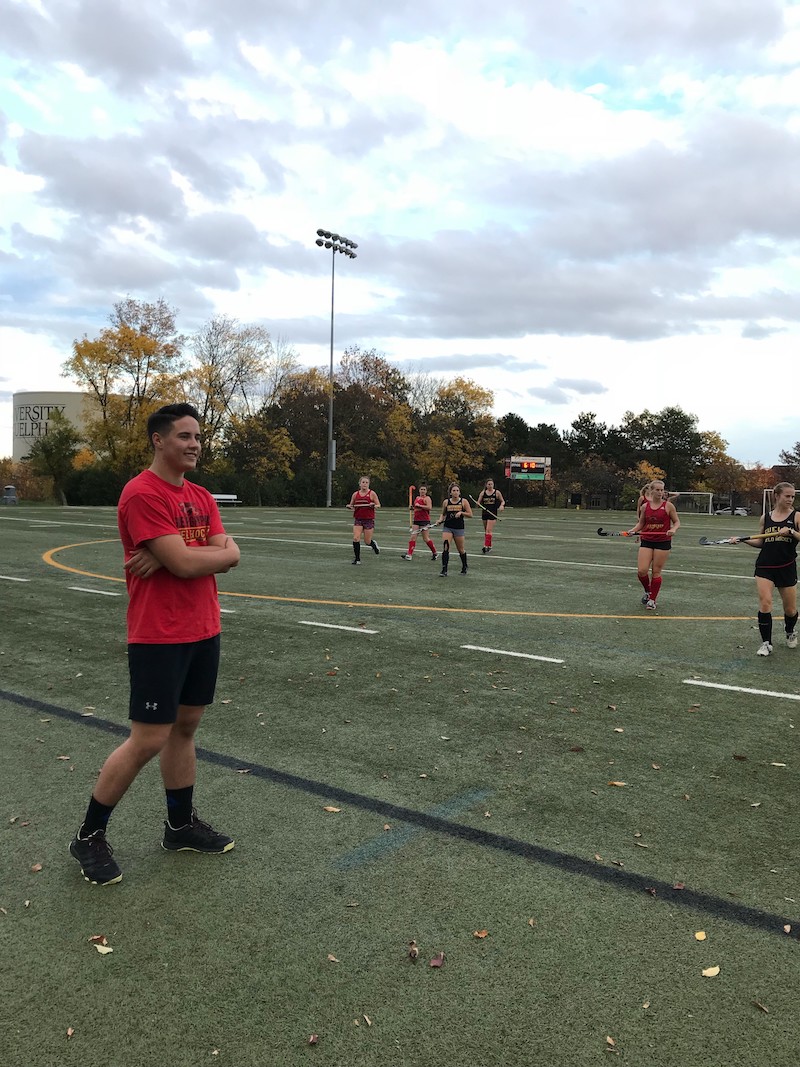 Come second year, Lane would bounce back from off-season surgery to score 14 goals for the Gryphons. By third year, he had earned OUA MVP and U SPORTS co-Player of the Year as captain and the leading scorer in the nation.

“Going into my third year, I was in the best shape I had ever been in and it really was an unforgettable season. If there was a season to stop playing, I did go out with a bang. I really left everything I had on the field,” Lane says.

“I didn’t play that year knowing kind of how the next few months were going to play out, but I was kind of glad almost subconsciously I had the attitude that, ‘This could be your last season: you could get injured, you never know what’s going to happen – kind of play every game likes it is your last.’”

It would be his final season as a player on the women’s roster, but not his last as a part of the team.

Shortly after, Lane began conversations with the Gryphons program regarding his transition. The meeting after that March morning practice, though an intimidating topic to broach with the fear of changing relationships for Lane, provided some added support as he continued this process.

“Really the only thing that changed was the way (the team) saw me and the pronouns and my name change, which they were all so supportive with,” Lane explains. “I would say out of lots of people in my life, they were the ones that made the switch almost immediately which was awesome.”

For former teammate and fifth-year veteran Rebecca Plouffe, the support was unconditional and unquestionable.

“Obviously all of us understood. It was definitely different because I don’t know anybody else who (was) going through the same thing,” Plouffe says. “(Oliver) also said, ‘I know it’s different.’”

Come the 2017 season, Lane came to the decision to pursue his hormone therapy, foregoing his opportunity to continue playing for the women’s team because a transgender policy for U SPORTS student-athletes was still being developed. Though the Guelph program offered to make uniform accommodations should he be willing to wait to begin therapy, Lane chose to pursue his transition.

“Although it was hard, I think it made it easier mentally (that) everyone supported the choice I made and I was moving forward with something that I so strongly wanted to move forward with,” Lane says. “It wasn’t easy but...there was more pros than cons.”

Lane still attended practices and helped the team in any way he could from the sidelines, just like the captain and leader he had been throughout his three seasons. This work ethic shone through and earned him the title of student assistant coach — a new title in the Gryphons field hockey community this year. 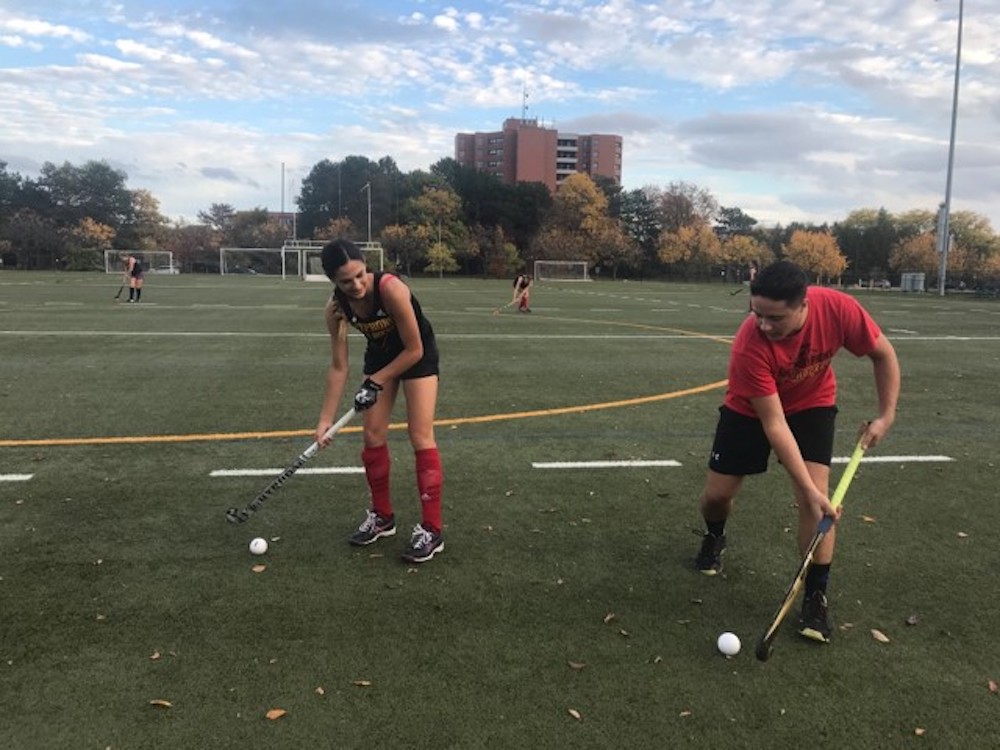 “He’s well-respected by his former teammates, has a great work ethic and a great disposition, so I just thought that that combination…is someone that you want to have around your athletes,” Turley explains of Lane’s new role.

For the players, seeing their former teammate become a coach provided a new, upgraded training experience.

“He knows us so well and he’s such good friends with all of us, and also...had been playing fairly recently and he was a phenomenal player when he was playing,” Plouffe explains. “Both of those aspects have really helped our team.”

For coach Turley and assistant coach Nick Govia, Lane plays an essential role as conduit between the coaches’ expectations and the players’ experiences. As a best friend and a coach similar in age to the roster, Lane is an invaluable member of the coaching dynamic when it comes to bridging the gap.

“He knows what it takes as an athlete and so I think it’s good when he speaks up,” Turley says. “I think that everyone listens to him and responds well.”

U SPORTS announced a new Transgender Student-Athlete Policy in September 2018, which states that “student-athletes will be eligible to compete on the team that corresponds with either their sex assigned at birth or their gender identity, provided that the student-athlete complies with the Canadian Anti-Doping Program.”

But Lane says that he is comfortable staying in his coaching role going forward — a decision widely respected in the Gryphons community.

“Today, with this policy in place it’s a no brainer: Oli would be able to play,” Gryphons director of athletics Scott McRoberts says. “And I know he’s happy where he is, I know he was comfortable with his decision, I know the reasons for his decision which I applaud even more.” 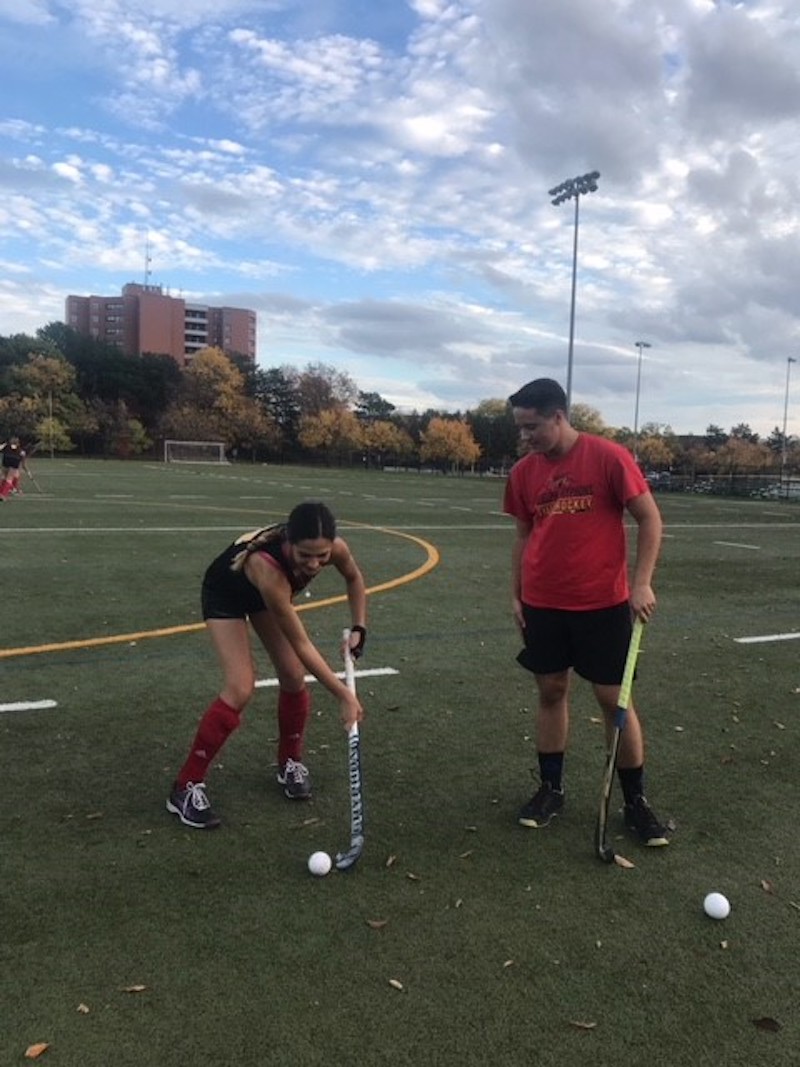 For Lane, the policy may not bring him back to playing the sport he loves at his university, but he sees the value it will have for other current and future student-athletes in U SPORTS.

“Although the policy means I can play, it’s something I’m not interested in...That’s just kind of how I personally see my own transition and how the policy relates to me,” he says. “But of course, everyone sees their own transition differently and falls differently into the spectrum of gender...I think the policy will open a lot of doors for athletes and people in specific situations. I do think it is a step in the right direction.”

And though he has thought about playing for a men’s or co-ed team, Lane is happy in his coaching role for the time-being — especially if it means continuing with the program he calls home.

“I love the University of Guelph and I really can’t imagine what my life would look like right now if I had gone to another school,” he says. “I’m just so thankful to be surrounded by incredible people that are so supportive and have allowed me to make the choice to transition and remain involved and be a part of the team still.”