Welcome to Weekend Watch, your weekly preview of all the best U SPORTS action you can’t miss across CW, OUA, RSEQ and AUS during the 2021-22 season.

In a battle of two undefeated powerhouses, the Toronto Varsity Blues are set to host the defending U SPORTS champions Victoria Vikes in a best-of-three series for the McCrae Cup.

This year, the Vikes are looking to repeat as national champions on the road after capturing the title at home in 2019. Their opponent, the OUA champion University of Toronto Varsity Blues plays host to the Vikes in Toronto, ON.

After claiming the Canada West title, Victoria is set to appear in their 36th national championship and fifth championship final in the last six seasons.

The Toronto Varsity Blues enter into the series as the OUA champions, defeating the Guelph Gryphons 3-0 to take the conference banner.

The Victoria Vikes are led by fourth-year defender Anna Mollenhauer. Mollenhauer received the Liz Hoffman Award as U SPORTS Field Hockey Player of the Year.

Toronto is led by fourth-year defender and All-Canadian Katie Lynes and will look to forward Sam McCrory for offensive support. McCrory, who won a National Championship with Victoria in 2019, led the Blues with eleven goals on the season.

The reigning champion Laval Rouge et Or look to retain their title as the U SPORTS Women’s Rugby Championship.

The Rouge et Or, who have gone undefeated this season, are eyeing their second U SPORTS banner to become the first back-to-back champions since the Lethbridge Pronghorns won three consecutive titles from 2007-2009.

Laval was in fine form in their first-round clash against the Acadia Axewomen, defeating the AUS finalists 46-12.

Standing in Laval’s way are the Queen’s Gaels, led by U SPORTS Women’s Rugby Player of the Year, Sophie de Goede.

Queen’s who are the tournament hosts, dispatched the Canada West Champions UBC Thunderbirds 33-26 in a tightly contested battle in the quarter-final round of the championship.

The Ottawa Gee-Gees will face off with a strong Victoria Vikes squad, both vying to book their ticket to the championship final.

The Gee-Gees opened the tournament emerging victorious against the AUS Champions StFX X-Women by a score of 40-12.

The Vikes stunned the OUA Champions Guelph Gryphons on the opening day winning 21-10.

Victoria’s Chanelle Edwards-Challenger is bound to turn heads. The flanker scored a pivotal try versus the Gryphons to earn a spot in the semifinals and was named a first-team All-Canadian.

For the eight consecutive season, the No. 1 Montreal Carabins (8-1) and No. 5 Laval Rouge et Or (6-3) will square off for the Dunsmore Cup and supremacy of the RSEQ Conference.

Montreal has been the team to beat this season, led by quarterback Jonathan Sénécal who has averaged 255 passing yards per game. The Carabins defence has been stout as well, only allowing 14.1 points per game in the regular season.

Laval offence, led by standout receiver Kevin Mital will look to carve their way through the tough defense. Mital led the Rouge et Or with 554 yards on 45 receptions and seven touchdowns through eight regular-season games.

Laval is coming off a 30-10 trouncing of the Concordia Stingers, while Montreal downed the Sherbrooke Vert et Or 31-3 in the RSEQ semifinals. 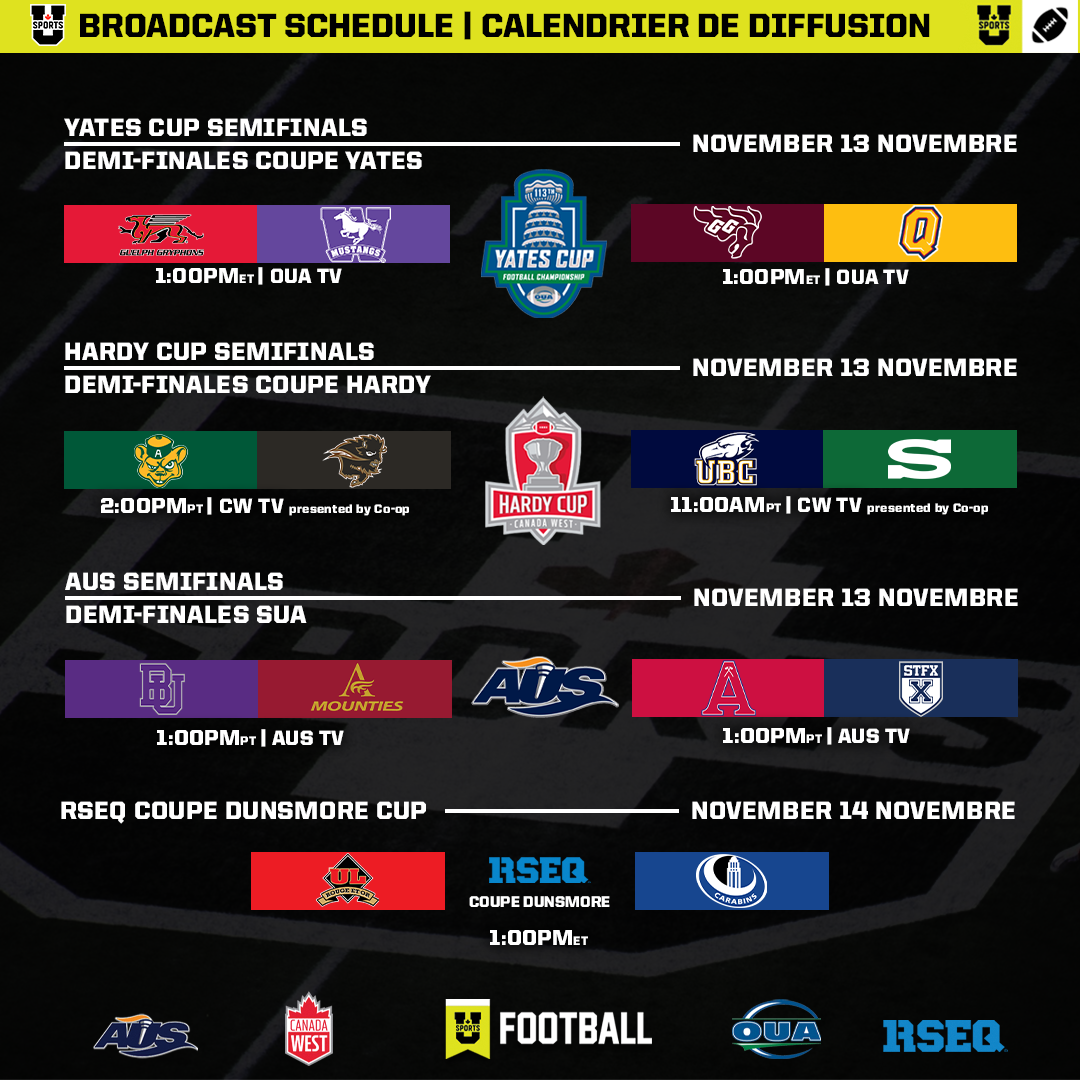 In RSEQ Men’s Soccer Championship, the No. 5 Montreal Carabins (10-3-0) are set to host divisional rival No. 7 Laval Rouge et Or.

Montreal is led by Guy-Frank Essomé who has posted seven goals and a pair of assists through ten games.

Laval’s Heikel Jarras leads the Rouge et Or in points with six goals and four assists on the season.

Laval and Montreal split the season series with a win apiece, and fans can expect fireworks at CEPSUM in Montreal.

The No. 2 York Lions will travel to Alumni Stadium to take on the Guelph Gryphons in the OUA Men’s soccer championship on Saturday.

The Gryphons knocked off the No.4 Carleton Ravens in the semifinals, with a 1-0 victory. Owen McKee notched the game-winner for the Gryphons in the 41st minute.

York topped crosstown rivals No. 6 Rams in a thrilling 3-2 overtime victory. Niko Sigur scored the game-winner in the 119th minute of the match.