Bishops senior captain Matthew Ouellet De Carlo isn’t short of accolades both on and off the field.

The 6-foot-5, 310-pound offensive linemen credits the mindset he brings every day, “perform at everything you do.”

Such honors include the 2014 newcomer of the year and 2016 linemen of the year for his Bishop Gaiter’s. With that, the two-time Academic All-Canadian and former U SPORTS East-West bowl participant understands the importance of balancing academics and athletics.

“It’s important to carve out time every day to complete what you have,” De Carlo says. “I just try to find those moments in places throughout the day to get my work done, it really adds up. Having a team study hall also helps and a perfect time that you have to take advantage of.”

Backtrack four years, De Carlo was finishing up his last year with CEGEP’s Champlain College, which neighbors Bishop’s University in Lennoxville, Que. As he describes it, moving down the road wasn’t a difficult decision.

“I really liked the environment in Lennoxville and I became very familiar with the area,” says De Carlo. “I loved what they provided both academically and athletically, such as their new sportsplex being built. The team was also graduating a couple guys along the offensive line so I knew I had a chance to play right away, which was appealing.”

Since arriving on campus, it’s been his goal to have an impact on those around him.

I like to lead by example and I’ve been trained by our best leaders in the past, I want to come in every day and perform at the highest level that I can for the team.

Much like his position, De Carlo doesn’t need the spotlight to have a major influence on the team. Most importantly, his work ethic and preparation is something his teammates don’t take for granted. As the Gaiters make the transition to the Maritimes in their first season in the AUS, De Carlo sees this as an opportunity for their team to grow and he’s excited to be one of the veterans leading it.

“We were all really excited to join the AUS and we knew it would be a high level of competition,” says De Carlo. “With that, we have the same mindset every year and that’s to win our league. I would say the travel obviously affects things, but like I said, the goals are the same and we’re trying to work as hard as we can to reach them.”

With the first half of the season complete, it’s evident AUS football is living up to its competitive reputation. Despite the Gaiters’ 1-3 record, their lone win came Sept. 15 against the Mount Allison Mounties, who lost 27-26 in Week 5 to the No.9 Saint Mary’s Huskies, who are undefeated at 5-0.

Halfway (through) now and it’s been what we expected in playing high-level competition, With that, our goals stay the same and we want to be playing November football. We always want to produce winning seasons here at. 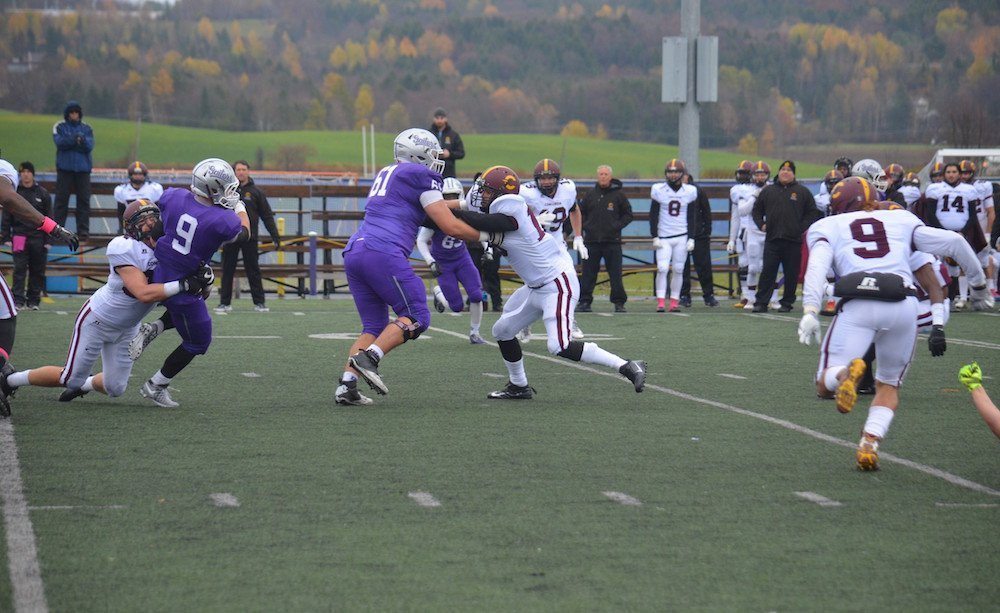 Following his graduation, De Carlo is looking to continue his performance in the classroom but this time in a reversed role. Through implementing the lessons and virtues football brought to his life, the veteran is looking to complete his degree in education.

“I want to stay involved in the sport of football and help out any way I can,” he says. “Primarily, I plan on becoming a high school english teacher and I’m beginning my practicum in February, which includes six weeks of teaching.”

The pieces are put in place for De Carlo to excel in his sustained leadership position. The Pierrefonds, Que., native and former student council representative has recognized the opportunity found in Lennoxville and hasn’t looked back.

Matt is a true leader, He was voted by his teammates to be our captain and not only leads his position group but everyone on the team.