Throughout the week of practice at Carleton, it was apparent Team West had all the ingredients required to make big plays in all three phases of the game.

The only question was would they put it on tape Saturday?

No more questions. The answer was a resounding yes after the West racked up 464 passing yards on their way to a 35-17 victory.

It was the fourth straight victory for the West and improved their record to 11-6 in the annual Canadian Football League top prospects game since the event began in 2003.

The catalyst on offence for the West all week was QB Adam Sinagra, who began the game with a 45-yard completion to Guelph’s Kian Schaffer-Baker. It was a sign of things to come. Schaffer-Baker would finish the day with 126 yards receiving to lead all pass catchers.

Sinagra was clearly the best passer on the field through the week of practice and it showed Saturday with the stands full, as the Dinos lead man and reigning Hec Crighton Trophy winner used his snappy release and strong arm to punch holes in the Team East secondary over and over again.

“It’s great to get to know the guys one on one that you see you usually go up against and see on highlights and have the chance to play with them,” said Sinagra.

One of the most underrated parts of a showcase game like the East-West Bowl is the protection each quarterback gets, allowing them to progress through reads and allow receivers to make plays in the open field. While Team East had a tough time slowing Manitoba defensive end Brock Gowanlock down - he would finish with two sacks - Team West had the distinct advantage that comes with having a handful of legitimate Top 20 CFL Draft prospect offensive lineman. 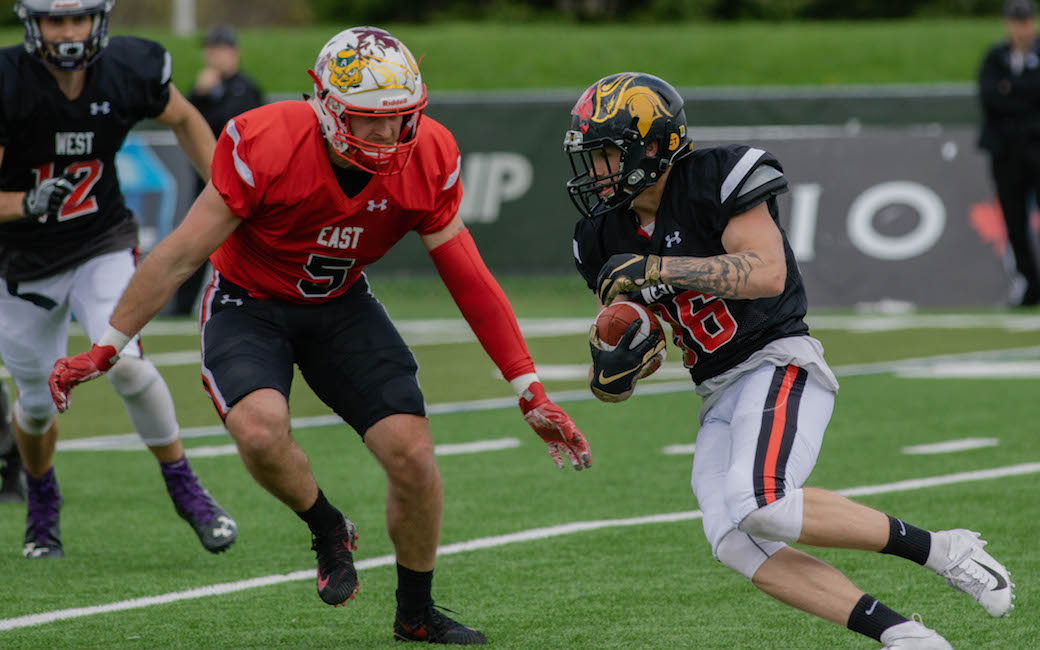 Sinagra and fellow West passer, Manitoba’s Des Catellier, had all the time they’d need and plenty of receiving talent to waste.

“Picking one is tough,” said Sinagra of which he’d love to have as a Dinos teammate. “(Waterloo’s) Tyler Ternowski is great, he’s just so shifty, he knows how to get open and his speed – he’s pretty elusive. (Saskatchewan’s Colton) Klassen gets open, Macho (Bockru of Manitoba) is great – I would take them all.”

Sinagra and Catellier found all of them including Schaffer-Baker during the game, hooking up for three touchdown passes and 322 receiving yards.

The result was a West squad that fell just two points short of the all-time East-West Bowl point total record by a single team of 37 set by Team West in 2017.

Mustang head coach Greg Marshall was at the helm of the victorious Western squad six months after leading Western to their second Vanier Cup appearance in as many years.

For the East, it was a tough day moving the ball through the air at times but they did get an efficient performance from Clay Sequeira, who finished 6-for-8 for 57 yards before being replaced by Acadia’s Hunter Guenard for the majority of the game.

Guenard battled through the afternoon to get the East back into the 17th edition of the national showcase. Despite trailing the entire game, he was able to lead drives and control the clock while completing 13 of 23 passes for 146 yards, one touchdown and an interception. 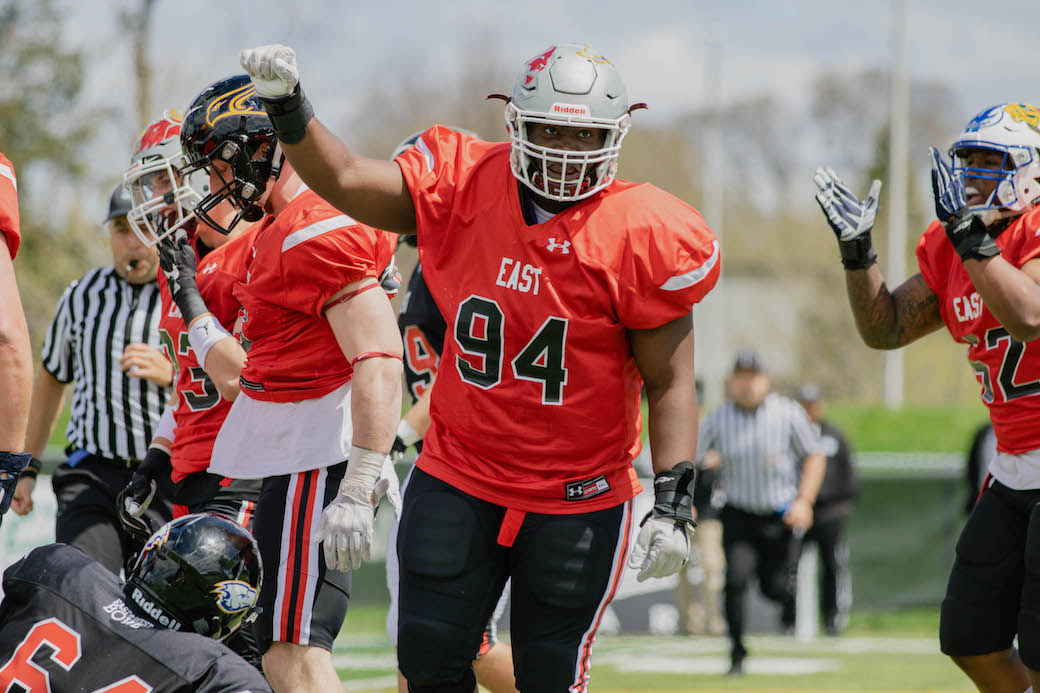 The real stars for Team East came in the backfield and defensive secondary. Acadia running back Dale Wright had 88 yards on just seven carries for a 12.6 yards per carry average, including an explosive burst in front of the Team West bench that went for 63 yards. Meanwhile, Montreal defensive back Marc-Antoine Dequoy bothered West receivers all day with his length and athleticism. THE RSEQ Defensive Player of the Year was eventually rewarded for his efforts with an interception, one of four total thrown on the day by East and West passers.

This group is chalk full of skilled U SPORTS talent capable of dominating this fall and having their name called this time next year in the CFL Draft. From lineman to receivers, running backs and maybe even a certain Calgary quarterback, the 2019 East-West Bowl might have been dominated by the West, but it’s the entire country that will benefit from the group’s talent.

“This game provides an opportunity for the CFL scouts, GMs and coaches to work hands-on with the next generation of CFL players," said Carleton head coach Steve Sumarah. "They get to work with them on a one-on-one basis and get to know them as people. To me, this is what’s made a huge difference in the CFL Draft. More and more U SPORTS guys are getting drafted because of the relationship built in the East-West Bowl.”

East-West Bowl Preview: Breaking down what to expect on Saturday