Windsor running back Jacob Savoni, Acadia linebacker Bailey Feltmate and Waterloo defensive back Tyrell Ford are the U SPORTS Football Players of the Week, for the period ending Aug. 24, 2019

Savoni tormented the opposing defence all night long in Windsor’s 34-17 OUA victory against York in Week 1, refusing to settle for short runs. In fact, the second-year back scampered for an average of 12.8 yards per carry on the day, racking up 179 yards on just 14 carries. Not only was the quantity there, but the quality as well, as Savoni turned three of his runs into points for the blue and gold.

The first major of the night came with just one minute to play in the opening quarter, when he rumbled in for a six-yard score to give Windsor their first lead of the game. His encore came in the third quarter, wherein he opened the second half scoring with a two-yard tally. He rounded out his three-touchdown day with his longest run of the night, as his 86-yard touchdown all but put the game out of reach and secured the Lancers the early season win.

A fourth-year kinesiology student from Moncton, N.B., Feltmate had a fumble recovery which he returned 25 yards for a touchdown in Acadia's 53-13 win over the Bishop's Gaiters in AUS action

He led the Axemen defence with nine solo tackles and four assisted tackles in the win.

Ford, the twin brother of Tre Ford, the reigning OUA MVP, made sure that both brothers impacted the outcome of the Warriors season opener; excelling in multiple facets of the game. Where he thrived most, however, was on Special Teams, taking advantage of his first punt return attempt by taking the Ethan Shafer kick all the way back for the touchdown. The 80-yard return came just over two minutes into the game and doubled his team's lead at the time over the Toronto Varsity Blues.

Ford rounded out his Special Teams efforts with another 24 yards on three more punt returns and a 26-yard kickoff return for good measure. The second team OUA All-Star also made sure he lived up to that billing on defence, picking up an interception on the night as well. 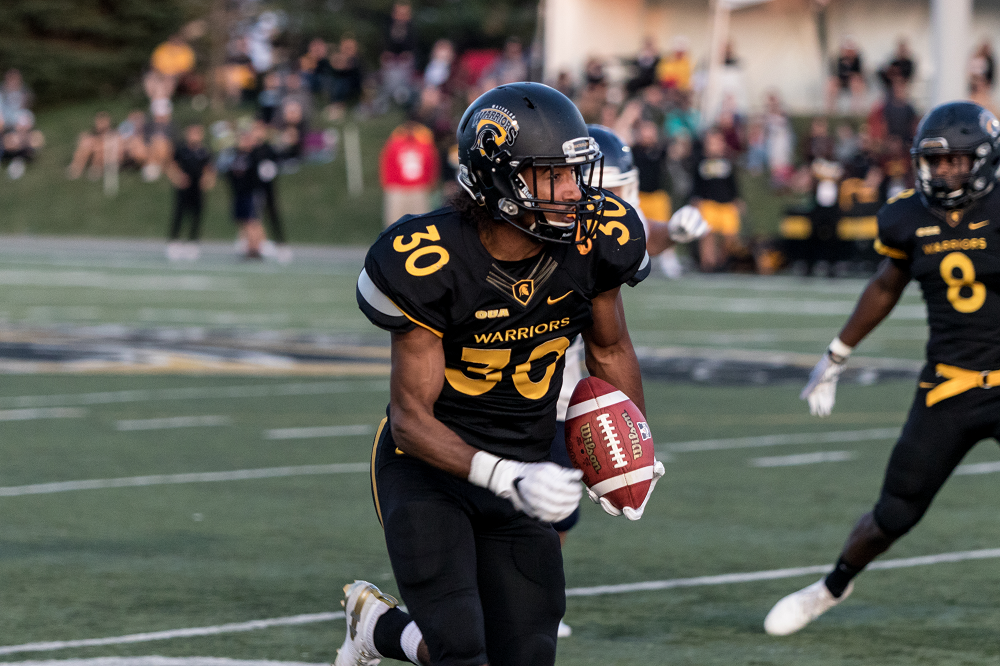