Welcome to Weekend Watch, your weekly preview of all the best U SPORTS football action you can’t miss across Canada West, the OUA, RSEQ and AUS during the 2021-22 season.

The playoffs are underway in the RSEQ and OUA as the top teams in each conference duke it out on the road to the 56th Vanier Cup. 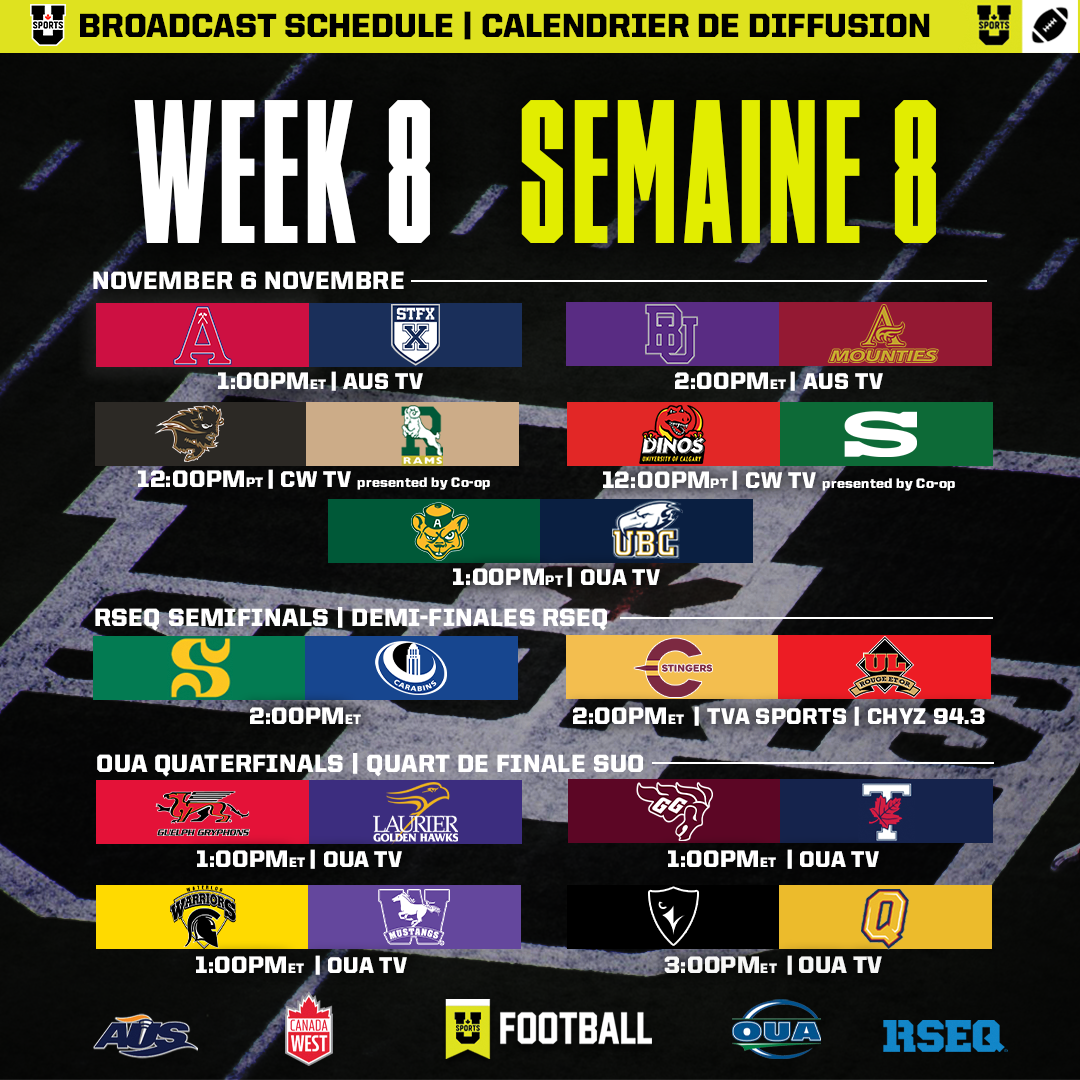 The No.1 Montreal Carabins will host the Sherbrooke Vert et Or to kick off the RSEQ Semifinals on Saturday afternoon.

The Carabins who have dominated the RSEQ Conference will be led by quarterback Jonathan Sénécal. Through six games, Sénécal has thrown for 1530 yards and nine touchdowns.

Despite having a 3-5 record, Sherbrooke turned heads in their Week 2 victory over the perennial powerhouse, Laval Rouge et Or.

In order to defeat the top-ranked Carabins, Sherbrook will rely on quarterback Anthony Robichaud who has averaged 215.4 yards per game on a 67.6 completion percentage.

The No. 5 Laval Rouge et Or will play host to the Concordia Stingers in a matchup that is bound to have fireworks.

The Stingers have the top passing offence in the RSEQ thanks to quarterback Olivier Roy, who is averaging 308.8 yards per game. Roy leads the nation with 2470 total passing yards to go along with a U SPORTS-best 18 touchdowns on the year.

Laval, coming off a bye week, will be looking to get their well-balanced attack rolling against the high-octane Stingers. The Rouge et Or’s 234 points for leads the RSEQ, while their 108 points against are the least.

With a victory over the Stingers, Laval could clinch their 18th straight Dunsmore Cup appearance.

The No. 7 Guelph Gryphons will travel to Waterloo to take on the Laurier Golden Hawks to kick off OUA playoff action.

The playoff tilt between the two teams, will be their first postseason meet since 2010, where the Golden Hawks beat the Gryphons 42-10 in a quarterfinal matchup.

The Gryphons speedy receiving duo of Kiondre Smith and Clark Barnes have combined for nine receiving touchdowns on the season. For Laurier, quarterback Connor Carusello will look to target Ente Eguavoen who has averaged 89.8 receiving yards per game.

The Toronto Varsity Blues will square off against the Ottawa Gee-Gees at Varsity Stadium in Toronto.

The Blues wrapped up the regular season with a 3-3 record to finish second in the OUA East division. The second-place finish is their best since the 2013 season and their first home playoff game since 1992.

The Gee-Gees, also with a .500 record, finished the season in third place in the OUA East division.

Winning three of their last four, the Garnet and Grey will look for another big game from quarterback Ben Maracle. Maracle turned in his best performance of the season last week against cross-town rivals Carleton Ravens (2-4). The second-year signal caller rushed for two touchdowns and added one through the air to clinch the third seed.

The Waterloo Warriors will have their hands full as they travel to London to take on the Western Mustangs on Saturday.

The Mustangs are stacked with offensive playmakers including star running back Keon Edwards, who leads the nation with 139.7 rushing yards per game and nine touchdowns through six games. In their last meet, Edwards torched the Warriors run defence, racking up 237 rushing yards on 20 carries and a trio of scores.

The Warriors got back in the win column last week with a commanding 36-8 victory over Laurier to clinch the fourth and final playoff spot in the OUA West division.

Dual-threat quarterback Tre Ford has 10 passing touchdowns to go along with three rushing touchdowns on the year. The fourth-year Rec & Leisure major is the only U SPORTS quarterback to average over 100 yards rushing per game this season.

The Carleton Ravens will travel to Kingston to take on the No.3 Queen’s Gaels, the only undefeated OUA team heading into the postseason.

Queen’s has been dominant on the defensive end, allowing just 7.33 points against per game.

Linebacker Nolan Bedard is the leading tackler for the Gaels with 32.5 total stops through six games. The fifth-year commerce major is a swiss army knife for the Gaels and is also utilized in the return game, accumulating 273 yards on the season.

The Ravens, coming off a loss to rival Ottawa, will look to bounce back from their defeat with another big performance from rookie quarterback Reid Vankoughnett. Last week, the first-year Winnipeg native had a career-high 220 yards through the air and cashed in for a rushing touchdown.

The undefeated No. 6 StFX X-Men play host to the Acadia Axemen in their last bout of the regular season.

The X-Men have the most potent offence in the AUS with an average of 427 scrimmage yards per game. StFX quarterback Silas Fagnan has been thrown 10 touchdowns through five games this season and sports a 68-percent completion rate.

StFX will have to get through Acadia’s defence led by Kameron Bell, a first-year linebacker, who leads the Axemen with 6.5 tackles per game.

The Bishop’s Gaiters will visit the Mount Allison Mounties to close out the AUS regular season.

The Gaiters, who have a rotating cast of quarterbacks, will likely rely on running back Louis-Philippe Gregoire who has averaged 108 yards on the ground through the first five games. The fifth-year student-athlete out of Jonquière, QC has three majors on the season.

The Mounties are looking to keep a two-game win streak alive, heading into the AUS post season. Despite averaging 15.2 points per game, Mount Allison has a 4-1 record, thanks in large part to their stout defence.

Mount Allison’s defence an AUS-leading 10 interceptions on the season, two of which have been returned for touchdowns.

The Manitoba Bisons are looking to get back into the win column when they visit the Regina Rams this Saturday.

Manitoba opened the season 3-0, but have dropped the last two contests. Last week, the Bisons lost to the No. 4 Saskatchewan Huskies 41-12.

Regina is coming off a tough 23-22 loss to the Alberta Golden Bears. The Rams squandered a 17-point lead in the fourth quarter to lose the nailbiter.

Despite the defeat, running back Kyle Borsa was a standout for the Rams, rushing for 113 yards reeling in two catches for 10 yards.

In a battle of two Top-10 teams, the No. 4 Saskatchewan Huskies host the No. 8 Calgary Dinos to close out their regular seasons.

With last week’s 42-12 victory over the Manitoba Bisons, Saskatchewan has already clinched first place in the Canada West. Calgary, the defending Vanier Cup champion, need a win or a UBC Thunderbirds loss to make it to the postseason.

The Dinos are led by fifth year quarterback, Josiah Joseph, who is coming off a four-touchdown, 350-yard passing performance in Calgary’s victory over UBC. The Dinos’ offence also features Tyson and Jalen Philpot, who combined for 383 total yards in the victory. Tyson earned U SPORTS Offensive Player of the Week honours for his explosive performance.

Speaking of explosive, Saskatchewan quarterback, Mason Nyhus leads the Canada West conference with 14 passing touchdowns to go along with 306 yards per game through the air.

To wrap up the Canada West regular season, the surging Alberta Golden Bears will visit the UBC Thunderbirds in a high-stakes matchup, with playoff spots on the line.

The Golden Bears clinched a post-season berth with their comeback victory over the Rams last week, while UBC needs a win as well as a Calgary loss to make the postseason.

Alberta linebacker Josiah Schakel received U SPORTS Defensive Player of the Week honours for his performance in the thriller against the Rams. The fourth-year student-athlete has averaged 9.1 tackles per game, leading the nation.

Schakel and the rest of the Bears’ defence will have their hands full with a UBC rushing attack that ranks second in U SPORTS averaging a staggering 204 yards per game.

In the season opener, the Golden Bears beat the Thunderbirds 44-19.