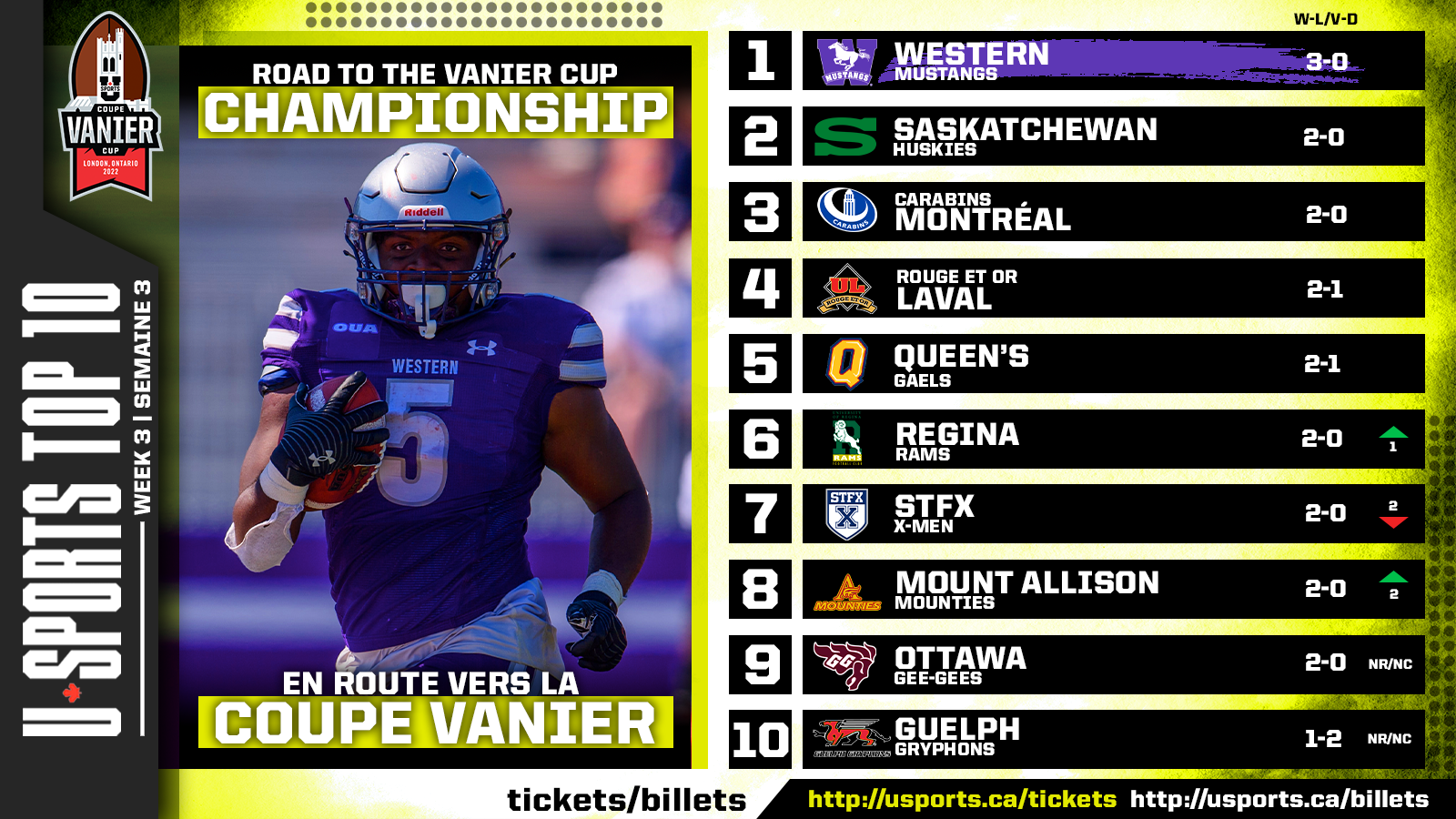 The Vanier Cup champion Western Mustangs keep racking up the wins and maintain their top ranking while the Mount Allison Mounties are the fastest moving team in the U SPORTS Top 10 polls.

The no. 1 Mustangs raced past the no. 5 Queen’s Gaels 35-11 on Saturday night in London to conserve their placing atop the rankings, earning 10 of the 12 first-place media votes in the process. Their opponent in last year’s Vanier Cup, the no. 2 Saskatchewan Huskies kept pace with a convincing 29-10 home-field win over the UBC Thunderbirds.

Not to be outdone, the no. 3 Montréal Carabins used a last-second game-winning field goal off the foot of placekicker Philippe Boyer to propel them past the no. 4 Laval Rouge et Or 21-18 on Saturday.

The first movement in the top 10 comes at the no. 6 position where the Regina Rams swap places with the no. 7 StFX X-Men after their 32-23 win over Calgary. Despite their 24-10 victory against Acadia, the X-Men slipped slightly behind the Rams in media polling this week thus explaining the change.

The Mount Allison Mounties are the biggest movers in this week’s rankings jumping up two spots to number 8, their highest ranking since 2014 when they hit no. 6 for two weeks (October 28 and November 4).

Jumping into the Top 10 this week are the no. 9 Ottawa Gee-Gees and the no. 10 Guelph Gryphons.

The Road to the Vanier Cup continues this week with a pair of Top 10 matchups including the no. 9 Ottawa Gee-Gees hosting the no. 10 Guelph Gryphons in OUA action, while the marque match-up of the week happens at Mosaic Stadium in the U Prairie Challenge presented by SaskMilk on Saturday night when the no. 6 Regina Rams host their provincial rivals, the no. 2 Saskatchewan Huskies at 7 pm CT.