In many cases, there are two factors that separate a mediocre and a great team: the skill of their players and the experience and knowledge of the coaching staff who guide the ship, day in and day out.

Heading into its third year participating in Hockey Canada’s Summer Showcase, the person tasked with leading Team U SPORTS, comprised of the best female hockey players is none other than Laurentian women’s hockey head coach, Stacey Colarossi.

A former player herself, the Voyageurs bench boss began coaching after a series of concussions derailed her own career before she headed off to university. However, after stepping away from the game entirely, which even included being unable to watch the sport on television, an opportunity arose for Colarossi which allowed her to return to the sport she loved: to serve as an assistant coach on her younger sister’s team, alongside Gil Nieuwendyk, the brother of Hall of Famer and three-time Stanley Cup champion, Joe Nieuwendyk.

“(I) loved being on the ice again,” says Colarossi. “It was just a good time being around these little girls that played with a passion and (it made me) realize that I could give back to the game, so I just started coaching little girls and my brother’s AA team.”

After five years removed from the game of hockey, Colarossi's passion and love for the sport returned for good and since then, she has continued to rise through the coaching ranks.

After beginning her coaching career in the minor hockey system, Colarossi began working at the university level in 2004, serving as an assistant coach with the York Lions under former Canadian women’s national team coach, Dan Church.

Looking back on those years, Colarossi described herself as being young and excitable, adding that Church taught her many lessons.

“He really brought back that you have to focus on the process and you have to look at a one-year, a three-year, and a five-year plan at the university level,” says Colarossi, whose resume also includes winning a gold medal as an assistant at the 2011 FISU Winter Universiade.  “He was quite calm and very organized in structure. And he instilled that in me. (He taught me) to definitely look at long-term goals, break it down each year, be organized and prepared so your players know and can be confident that they’re prepared. When you’re a young coach you want to solve all the problems right away, and you can’t, you have to be pretty diligent in your planning process.”

That ability to plan and set goals came into practice for Colarossi, when in August 2012 she earned the right to guide her own ship, after being tasked with building and coaching the expansion Laurentian women’s hockey program beginning the following season. And in just her third campaign, she guided her club to their first-ever playoff berth.

Colarossi will lead the Voyageurs into their sixth season in September, but before her attention completely turns to making strides with her own club, she is focused on guiding Team U SPORTS this summer for the second straight year.

“It’s a true honour to be able to be a part of the brand and U SPORTS. What we’ve done last year and the success we had as a team out at the development camp was great. I really wanted to be a part of building and increasing that visibility moving forward,” says Colarossi, whose U SPORTS squad picked up its first-ever win over Hockey Canada’s Development Team last August.

“It’s just nice to get on the ice with people with different viewpoints. They’re going to challenge me and make me better.”

One of those individuals who will challenge and work in tandem with Colarossi is Marc-André Côté, who will be joining her for the second straight year behind the bench. The newly appointed head coach of the Université de Moncton women's hockey team is also a former player, having suited up for Aigles Bleus men’s team from 2008-13, as well as with Val-d’Or of the QMJHL before spending the last five years working as an assistant with Moncton’s women’s squad.

Like Colarossi, Côté is equally as honoured to be selected as a member of the U SPORTS coaching staff and is looking forward to working with the veteran U SPORTS bench boss again.

“We kind of see things the same way, kind of expect the same stuff from our people,” says Côté, also a teacher. “We are demanding towards each other, but we are also demanding towards all people around us. And we just like people who work hard. We don’t leave any details out there, we’re always prepared for everything and that’s why I think we get along pretty well.” 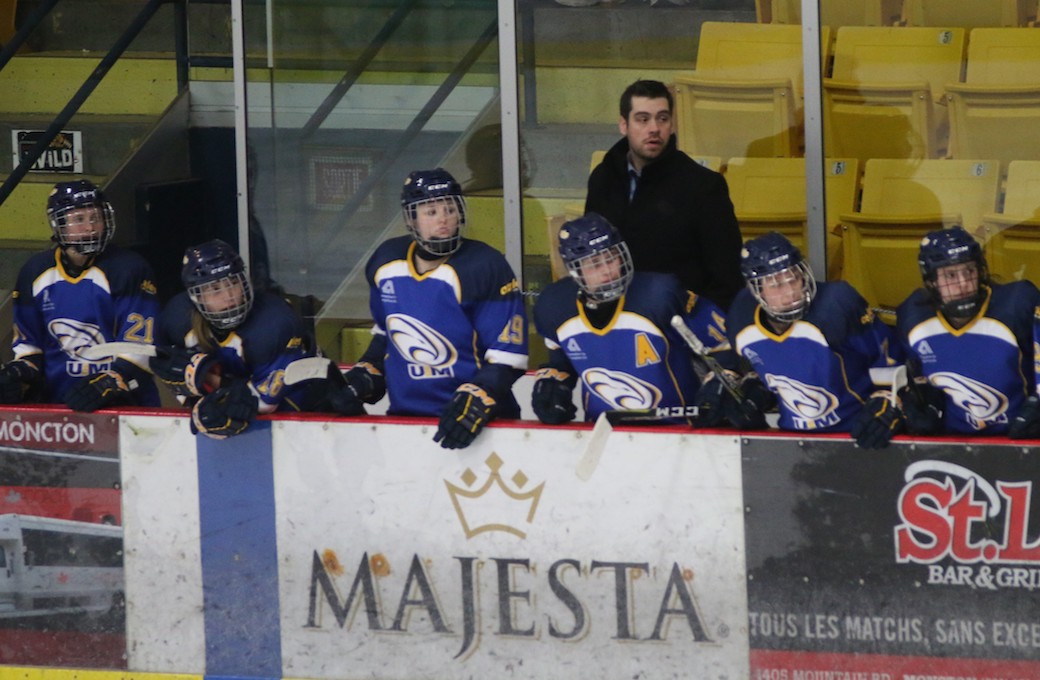 Rounding out the rest of the coaching staff is Ottawa’s Greg Bowles and Mount Allison’s Terry Rhindress, who will both attending the event for the first time.

Bowles joins the coaching staff having been the assistant coach with the Ottawa Gee-Gees since 2016. Although he only recently joined the university ranks, his coaching experience spans 20 years and includes time spent coaching in the Provincial Women’s Hockey League (PWHL) and Ottawa District Women’s Hockey Association (ODWHA), as well as in player identification and player training positions with NWHL and members of the CWHL and national women’s team. Like Bowless, Rhindress – the Mounties’ recently appointed head coach – has a vast amount of experience ranging from minor hockey to major junior in the QMJHL, where he acted as an assistant with the Acadie-Bathurst Titan and as a scout with the Drummondville Voltigeurs.

Colarossi and Côté feel their lineup is a mix of youth and experience, is physically fit to compete for a full 60 minutes and will feature more pure goal scorers this time around – an area the team struggled in to start last year’s tournament. Both returning coaches are feeling much more confident and prepared for this year’s event.

“(Last year) I think we started something good and this year I think we actually know what we are getting into, getting involved with it,” says Côté. “So I think it gives both Stacey and I a little bit of an edge on what to expect from the camp and how to prepare the girls towards competing.”

“This year with the returners, we should have more confidence coming in, so we should start a little bit ahead of where we were last year,” adds Colarossi.

Colarossi and Côté will lead Team U SPORTS to Calgary for the week-long camp beginning Thursday and will take on Canada’s National Women’s Development Team and Team Japan, as they look to promote and showcase U SPORTS Women’s Hockey.