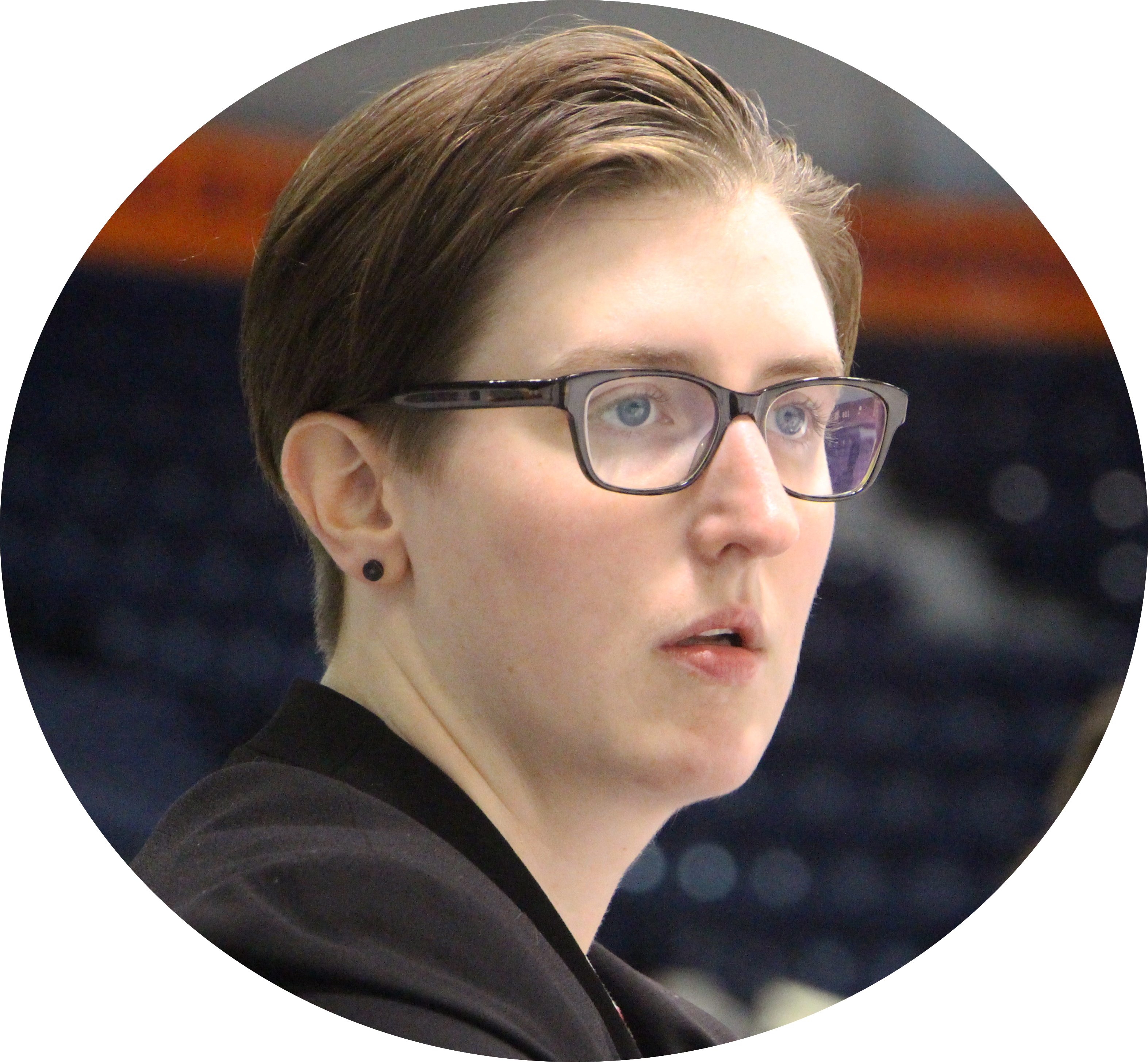 1. How did you first get involved in coaching? What was your path to your position as head coach of the University of New Brunswick Reds?

Growing up, I always had a passion for sport, and being involved with the development of youth in sport. My first memory of coaching was in the second grade, where I set up soccer and basketball camps for my classmates to learn the fundamentals of the two sports. In reality, I wanted to play different sports with more people at lunch and recess. I figured if I could teach them, then I would have more people to play with!

In high school, I started helping with the coaching of our female hockey team, and other camps around the city. Once I got to university, I knew that coaching would be a field that I would love to pursue one day, so I helped coach the Edmonton Special Olympics floor hockey team, as well as other camps put on by the university. 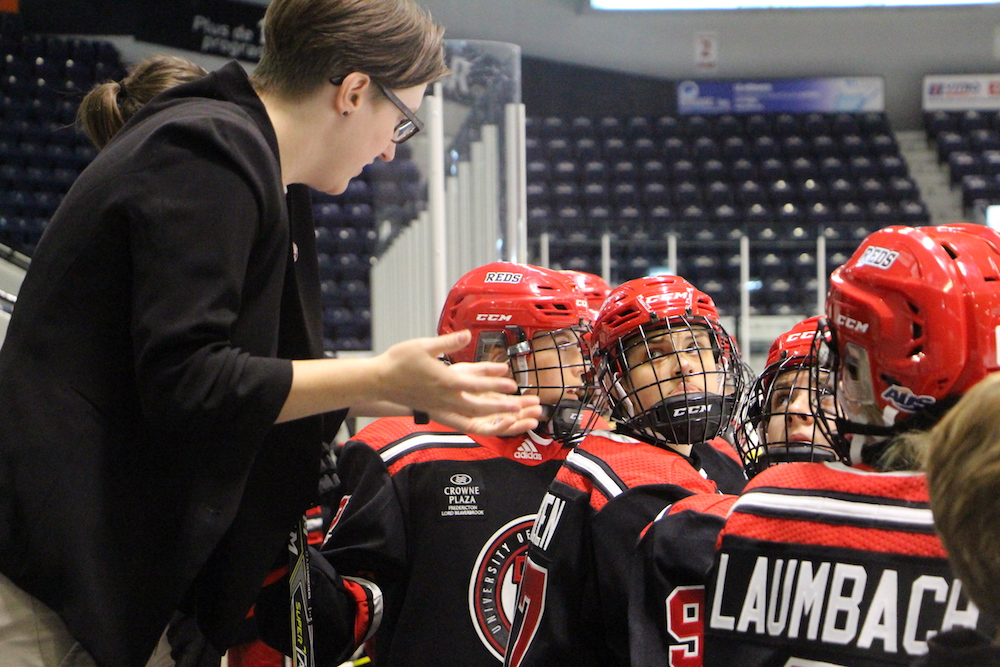 Once I completed my five years at the University of Alberta, head coach Howie Draper approached me to see if I would be interested in continuing to help with the team. I believe he could see my passion for the sport and helping to develop our student-athletes. I immediately jumped at the opportunity to work with Howie. After two years at the University of Alberta, I made the trek down Highway 2 to start a women’s hockey program at Olds College. Jumping from an assistant coach to a head coach certainly helped in evolving my coaching philosophy and has enriched my passion for the game.

After two years at Olds College, I applied for the head coach position at the University of New Brunswick and after a long interview process, I accepted the position. I packed my bags and headed east to where I am now – excited to bring women’s hockey back to UNB.

Howie Draper has certainly had the biggest influence on me as a coach. As a player, Howie and I developed a strong, trusting relationship that helped challenge me. That continued as a coach, where he continued to push me to grow in my position and as a person. The lessons I have learned from Howie: hard work, attention to details, humility, and commitment to the development of the holistic person, are all attributes that I have tried to instill into my own coaching philosophy. I would not be in the position I am today if Howie did not give me the opportunity, both as a player and as a coach. I am forever thankful for his guidance and friendship.

I see myself as a democratic coach who relies on a positive two-way communication line. We work a ton on goal setting, and we want to help our athletes continue to develop into the best versions of themselves. I promote open and honest communication within not only our athletes, but ourselves as individuals. I like to think that I am a player’s coach who continuously demands excellence, and that our athletes take control of their development.

Along with Howie Draper, I have a few different coaches that I admire. I had time this past year to do a ton of reading and look into how I wanted to continue to further my philosophies and development.

Pat Summit’s book Reach for the Summit was one that I picked up and couldn’t put down. I love the philosophies and beliefs of coach Summit, and this year I started to use her philosophies to shape the coaching of our team. One of the most interesting things I learned about Coach Summit’s time with the University of Tennessee was that 100 per cent of her players who completed their eligibility earned a diploma. She was not only an inspiring coach, but truly showed that she cared about her players in setting them up for success in the future. I believe Coach Summit is an example of a positive female leader that I aspire to be as well. She empowered her players, instilled discipline and accountability within her team, and cared about her players. One of my favorite quotes from her is “They don’t care how much you know unless they know how much you care.” These are things that I have taken from her – she was a tough coach, but her players knew she cared.

I don’t know if I’ve done anything “out of the box” but I do tend to take risks at times by pulling the goalie if we are down a goal or two at different times during the game. I have also switched forwards and defence at different points during the game, but this was on a special occasion!

I believe the opportunity at UNB is my greatest coaching achievement. I am thrilled that I was chosen to lead UNB back into U SPORTS. I know how special this program is to Fredericton and the hockey community. This is something that I know is special and I am forever grateful for the opportunity here at UNB.

One of my greatest coaching moments was when I was coaching with Alberta and won the Canada West conference championships in 2015. The team was very special that year, and it was awesome to watch and coach some of my former teammates. I thoroughly enjoyed the opportunity to share that moment with them, and the relationships that we built are ones that I hold close to this day.

7. What’s the best advice you can give to an athlete and/or athlete’s parent?

The best advice I would give prospective student-athletes is to make sure they do their research on the schools that they have an interest in academically. Once you have done the research, it is important to go visit the school and meet with the coach. This was one of the things that when I was being recruited, made the most significant difference. I fell in love with the school, and wanted to work hard for my coach, so it became an easy decision. When an athlete can go visit the school and meet the coach, they will know if they can see themselves growing up there.

I think I’ve realized how important culture is. Culture is everything, and it doesn’t come over night. This is something that, we as a team, need to continuously work on and evolve. From Day 1, we want to make sure that our culture is positive, and that it is a place where future Reds want to play. I’ve learned culture isn’t a given, and that it can’t be taken for granted. 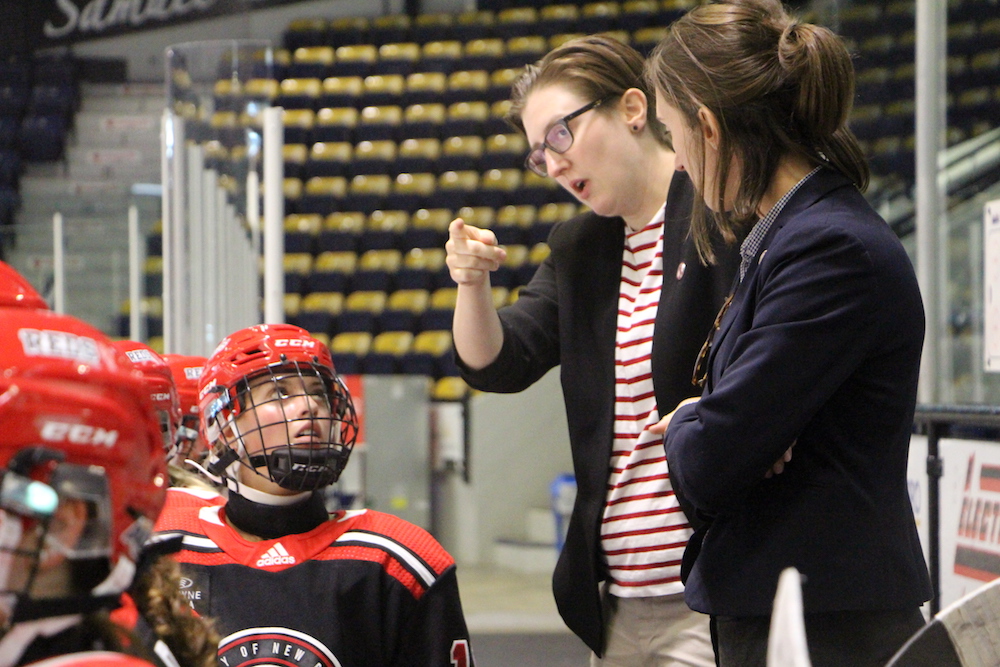 One of the things that I learned from Howie, was how to work hard. This is something that has remained the same in my coaching style. Our team is trained to out-work and out-compete our opponents. This is something that was instilled in me as a player, and I push this philosophy onto our athletes: hard work is hard and to compete is a privilege.

During the winter, we watch a ton of hockey. Even when I’m not in coaching mode, my family loves hockey, and we have it on almost every night. We are big Edmonton Oilers fans, and now being out east, I’m starting to watch more of the Leafs (secretly!). In the summers, I have been exploring the east coast. We love living out here, and after the summer, the Maritimes are so special. Definitely, somewhere people should circle as their next vacation.

I have been told my analogies are great by my players but, embarrassing by my coaching staff. I also tend to fall a lot – off benches, on the ice, down the hill, etc. I am sure there will be more as the season goes on!

Weekend Watch: No. 1 Ottawa to face No. 2 StFX in Rowan’s Legacy exhibition game