On Friday, the Blues defeated crosstown rivals Ryerson Rams (3-3) 3-2 in an overtime thriller to improve to 7-1 on the season, ending 2021 without a regulation loss.

Taylor Trussler scored two goals in the game, including the overtime winner. Trussler and the Varsity Blues will be back in action on January 14 when they host the No.8 Nipissing Lakers in a back-to-back in what will be Toronto’s toughest test to date. 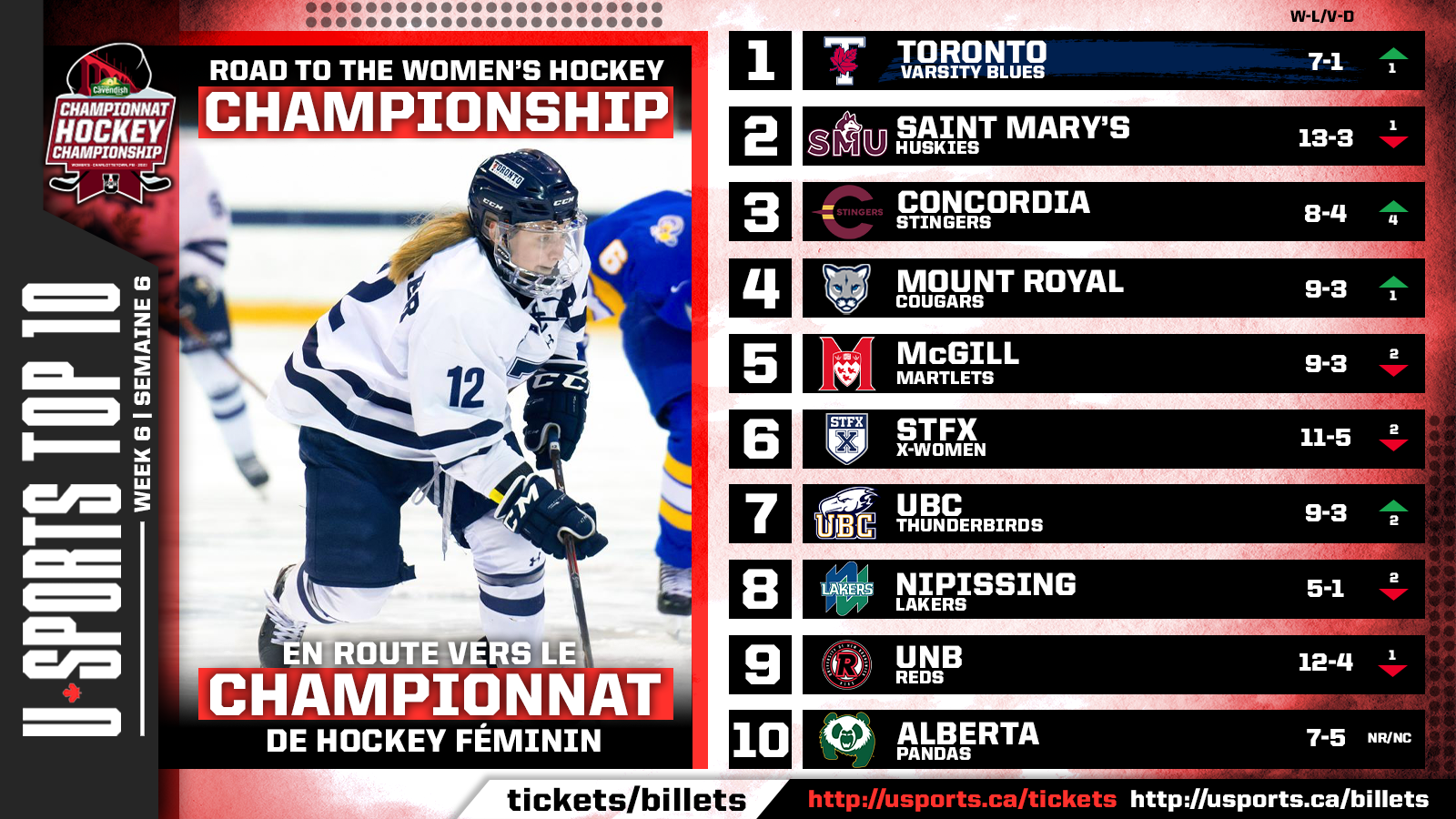 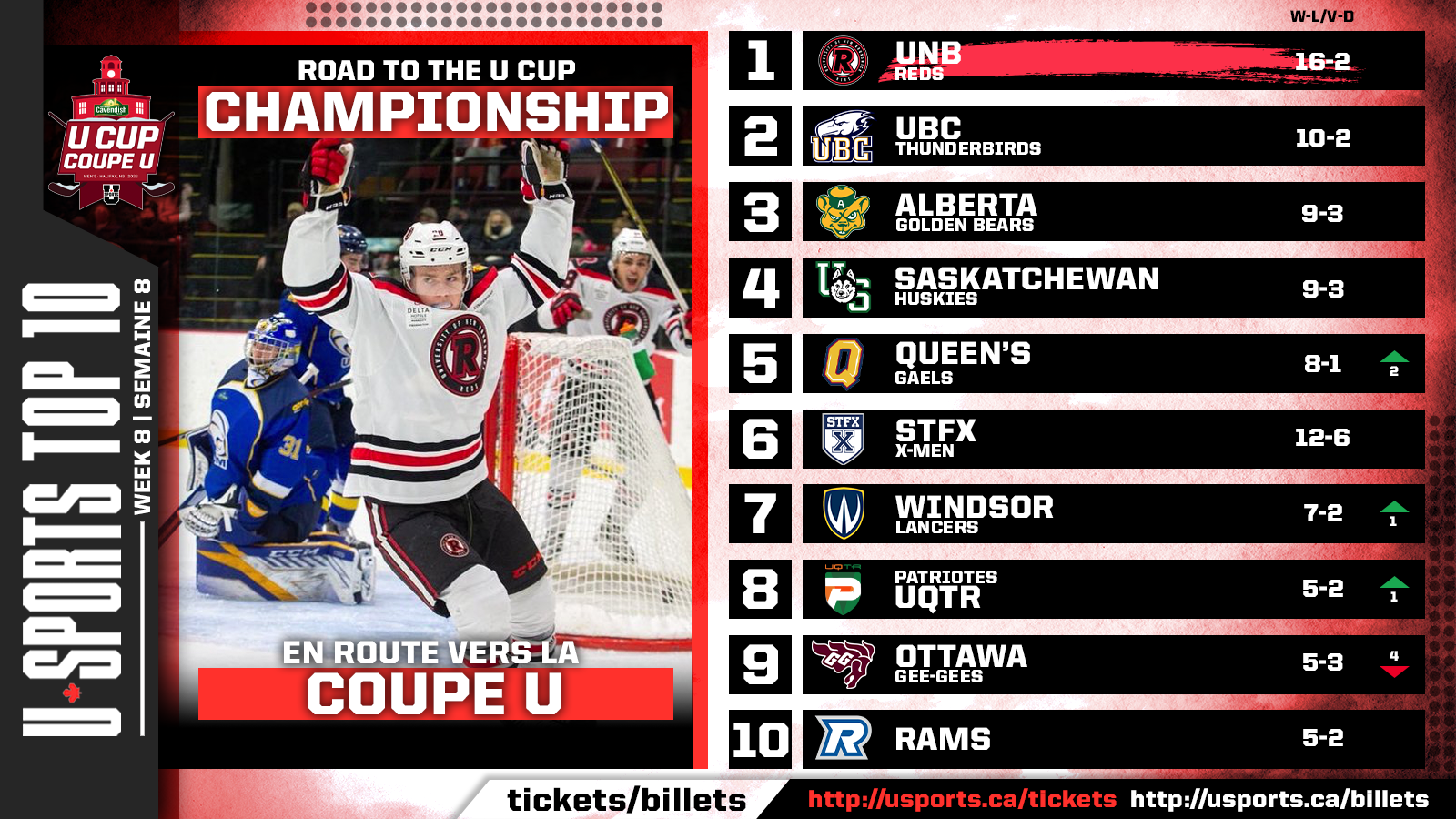 On the women’s volleyball court, the No.1 Alberta Pandas (8-0) remain the top seed after back-to-back victories over the MacEwan Griffins (0-8). In the second match, fourth-year Janna Zonneveld led the Pandas with 16 kills, while Panda’s middle made history becoming the all-time Alberta leader in blocks, now with 286 career blocks. 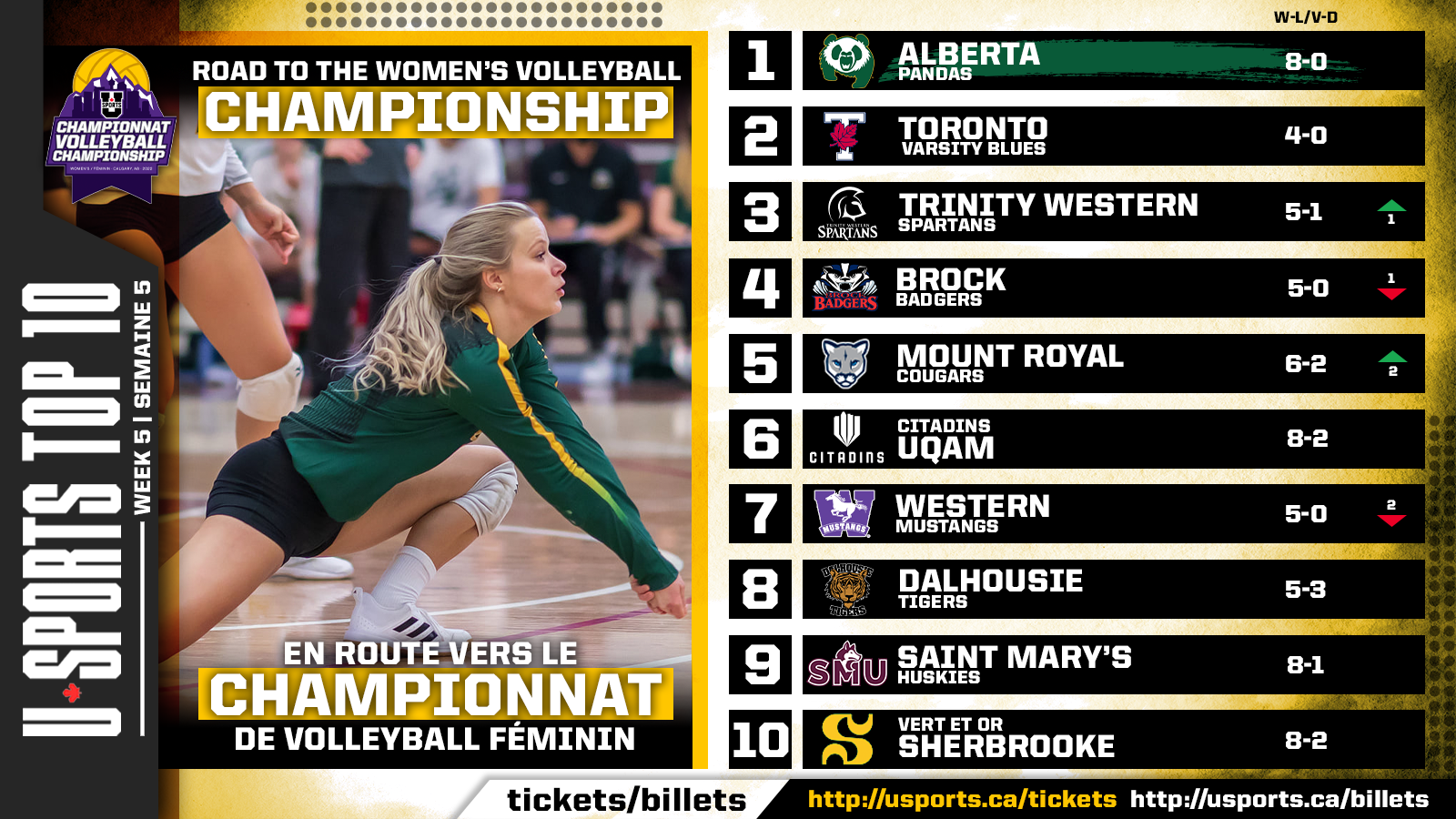 On the men’s court, the No. 1 Trinity Western Spartans (6-0) remain atop the rankings after winning two matches against the UFV Cascades (0-7) in a home-and-home series.

Third-year outside Brodie Hofer leads the Spartans with 3.74 kills per set through six conference matches. 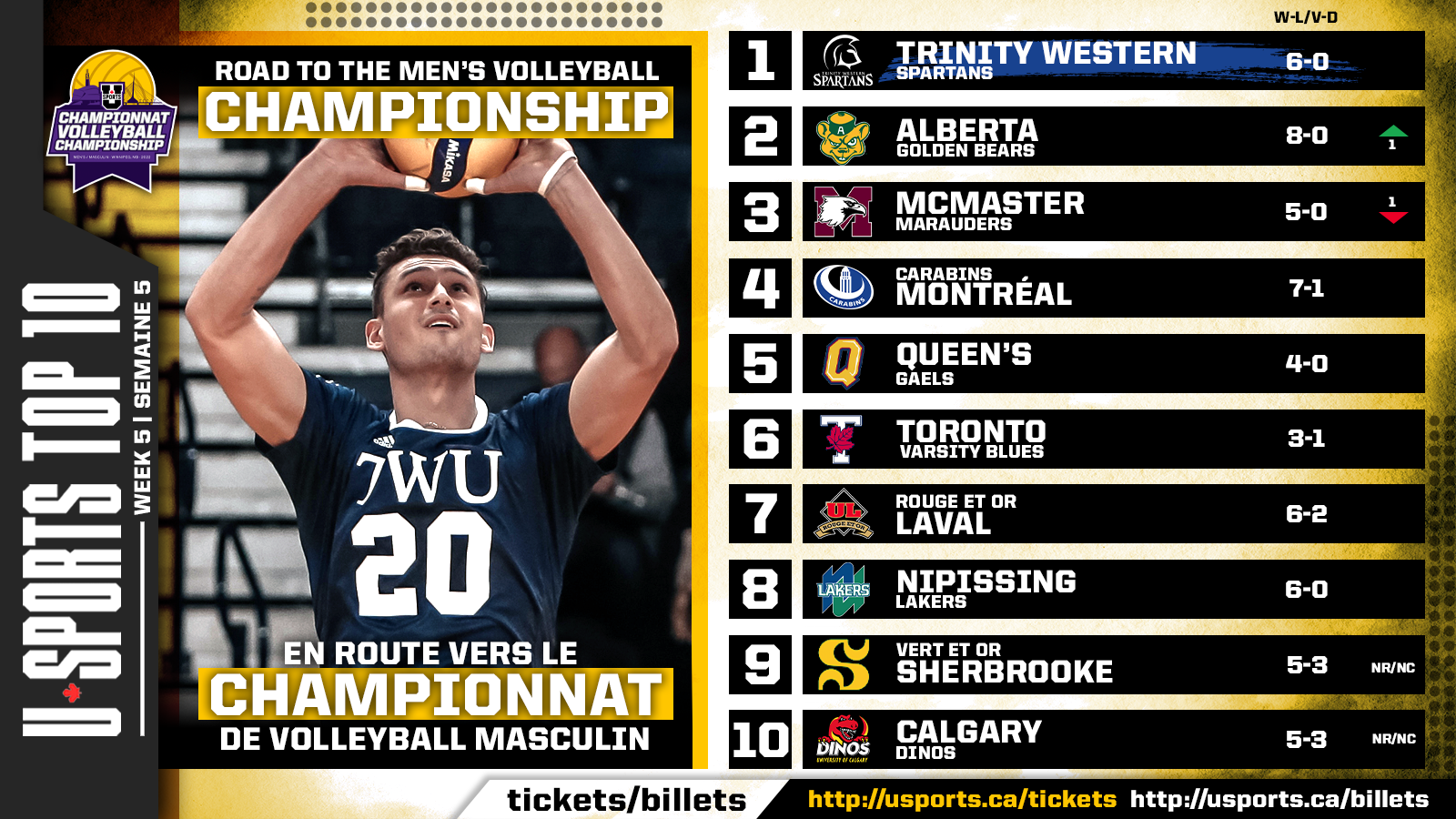 In women’s basketball, the No.1 Saskatchewan Huskies (8-0) are still the top-ranked team in the nation after extending their win streak to eight after defeating the Manitoba Bisons (2-6) in a home-and-home series.

Summer Masikewich leads the Huskies with 20.9 points per game to go along with 10.5 rebounds per game. 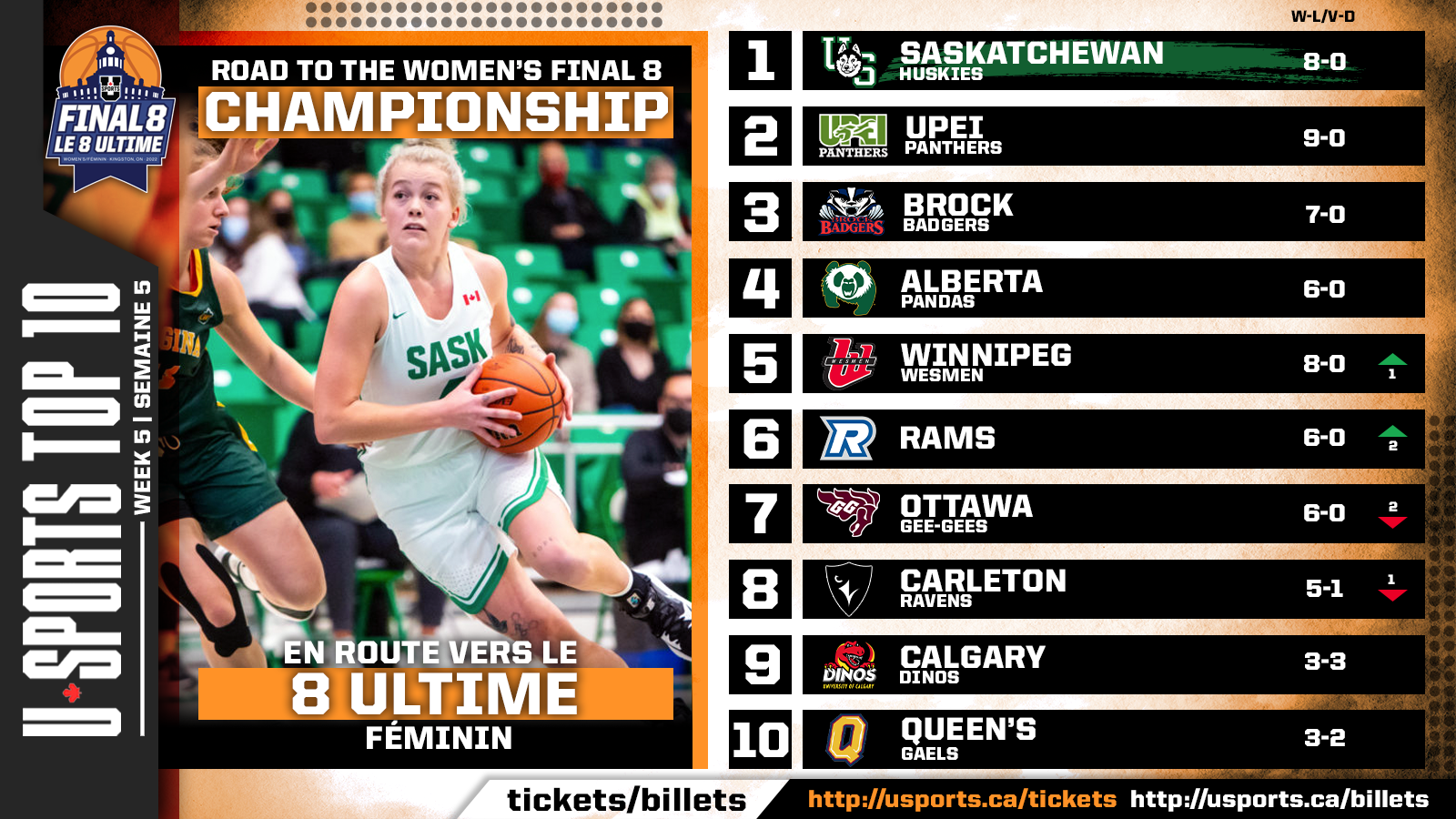 In men’s basketball, the No.1 Carleton Ravens (6-0) are the top squad after being idle in conference play. The Ravens are averaging 98.8 points per game while allowing only 57.2 points against on the season. 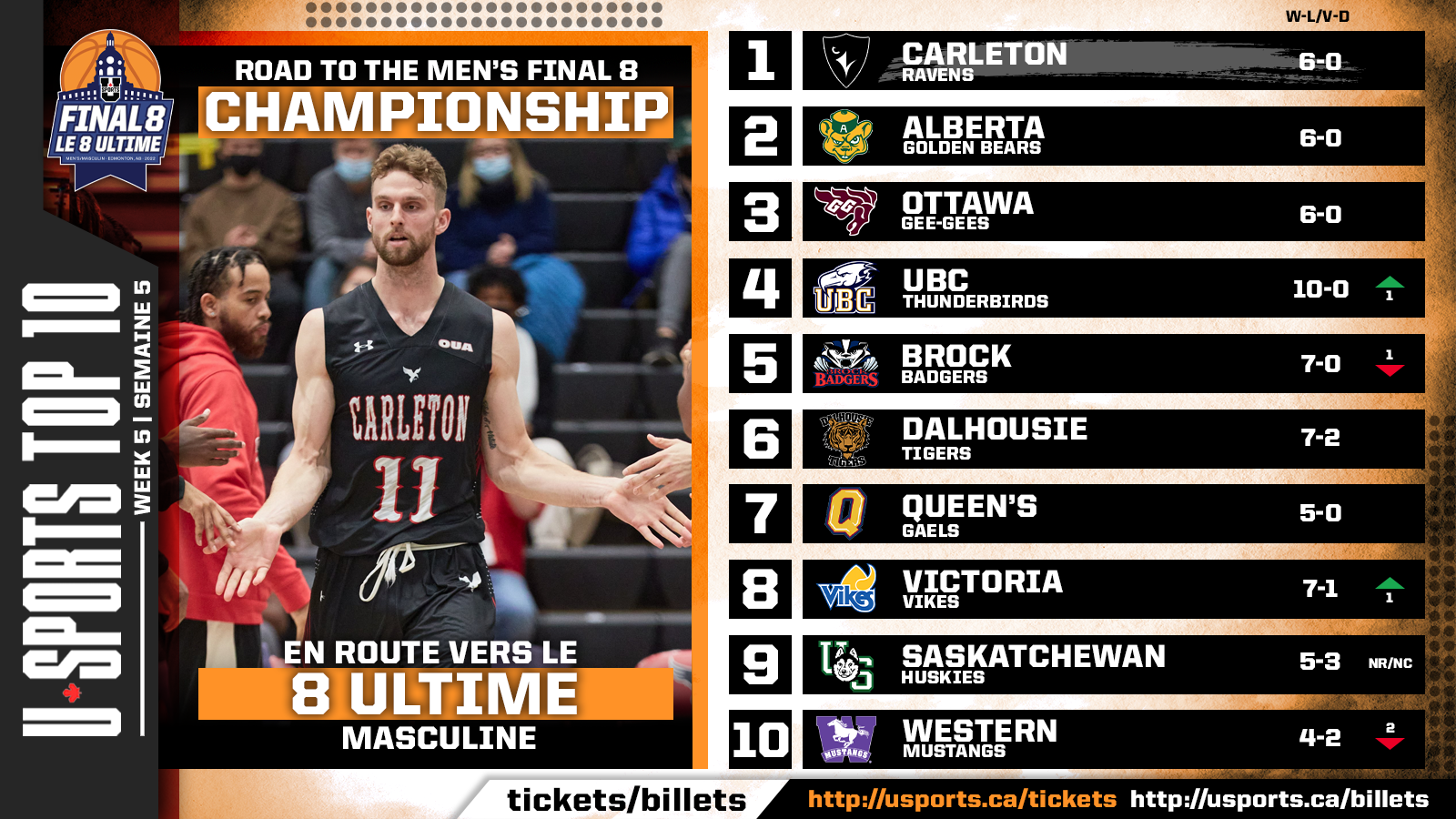 In women’s swimming, the UBC Thunderbirds have landed at the top spot in the national rankings after a second-place finish at the Odlum Brown Colleges Cup over the weekend. 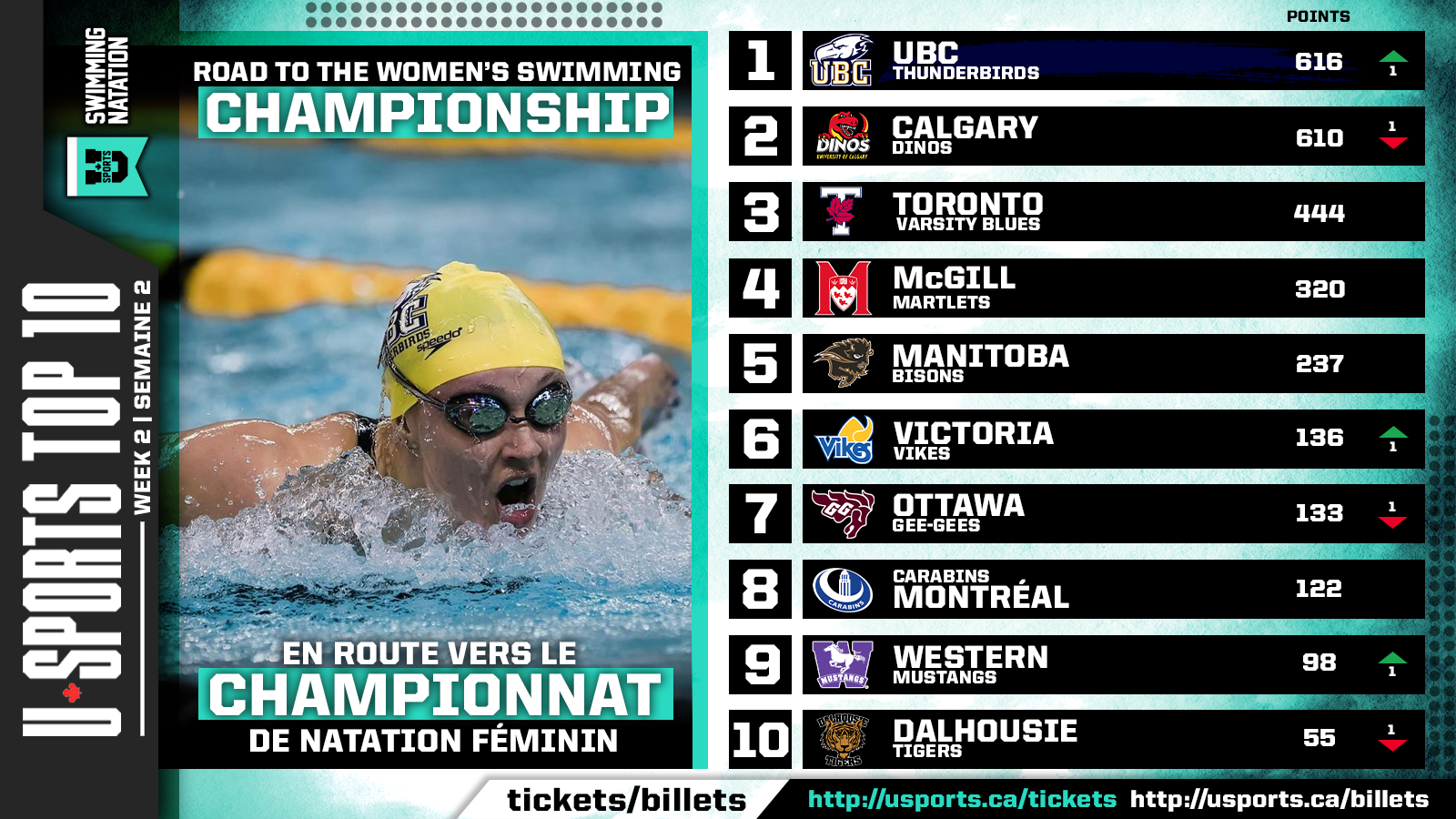 In men’s swimming, the UBC Thunderbirds remain the team to beat after taking gold in the Odlum Brown Colleges Cup. 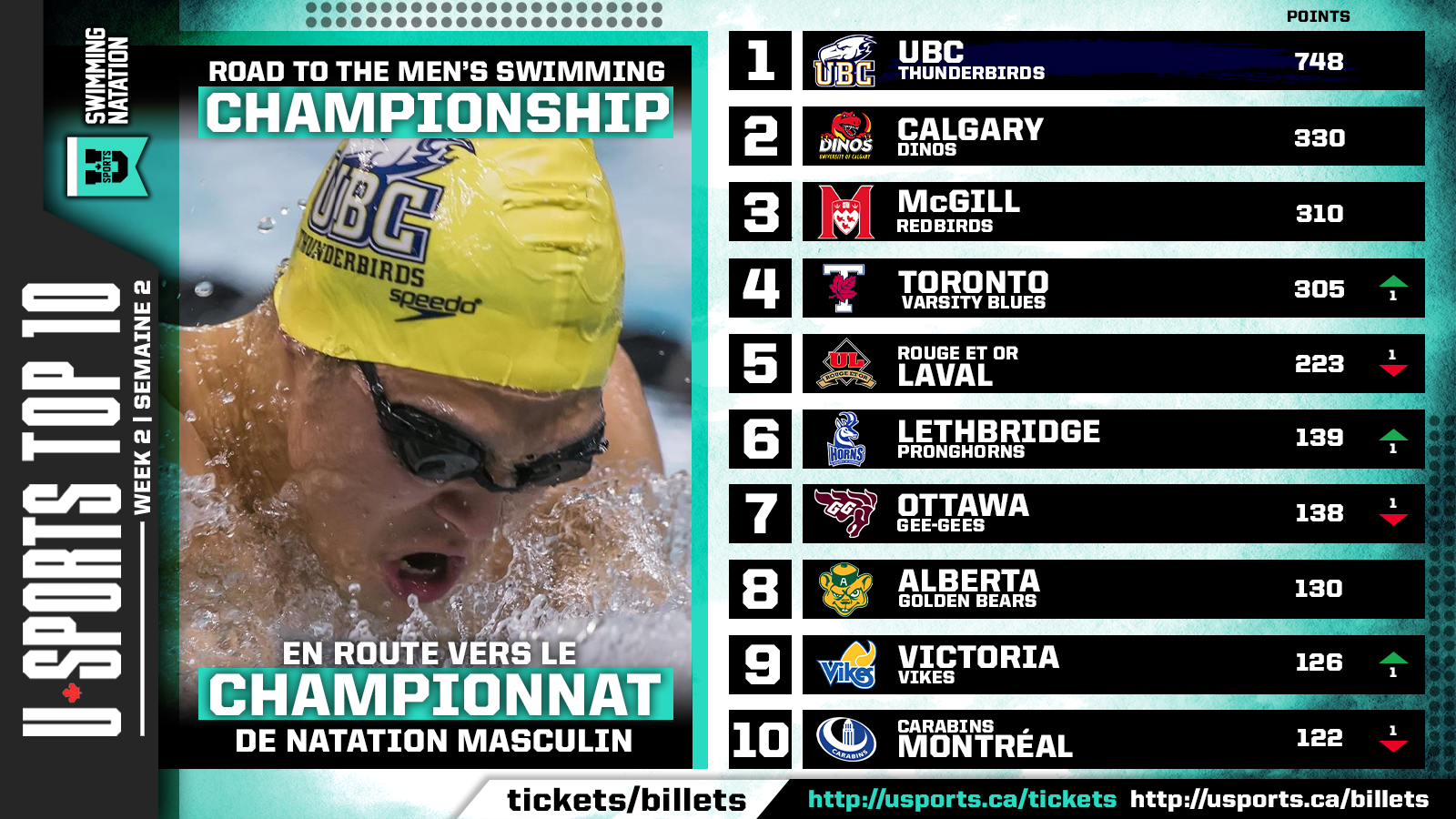 In men’s wrestling, the No. 1 Alberta Golden Bears remain the top seed as competition was idle. 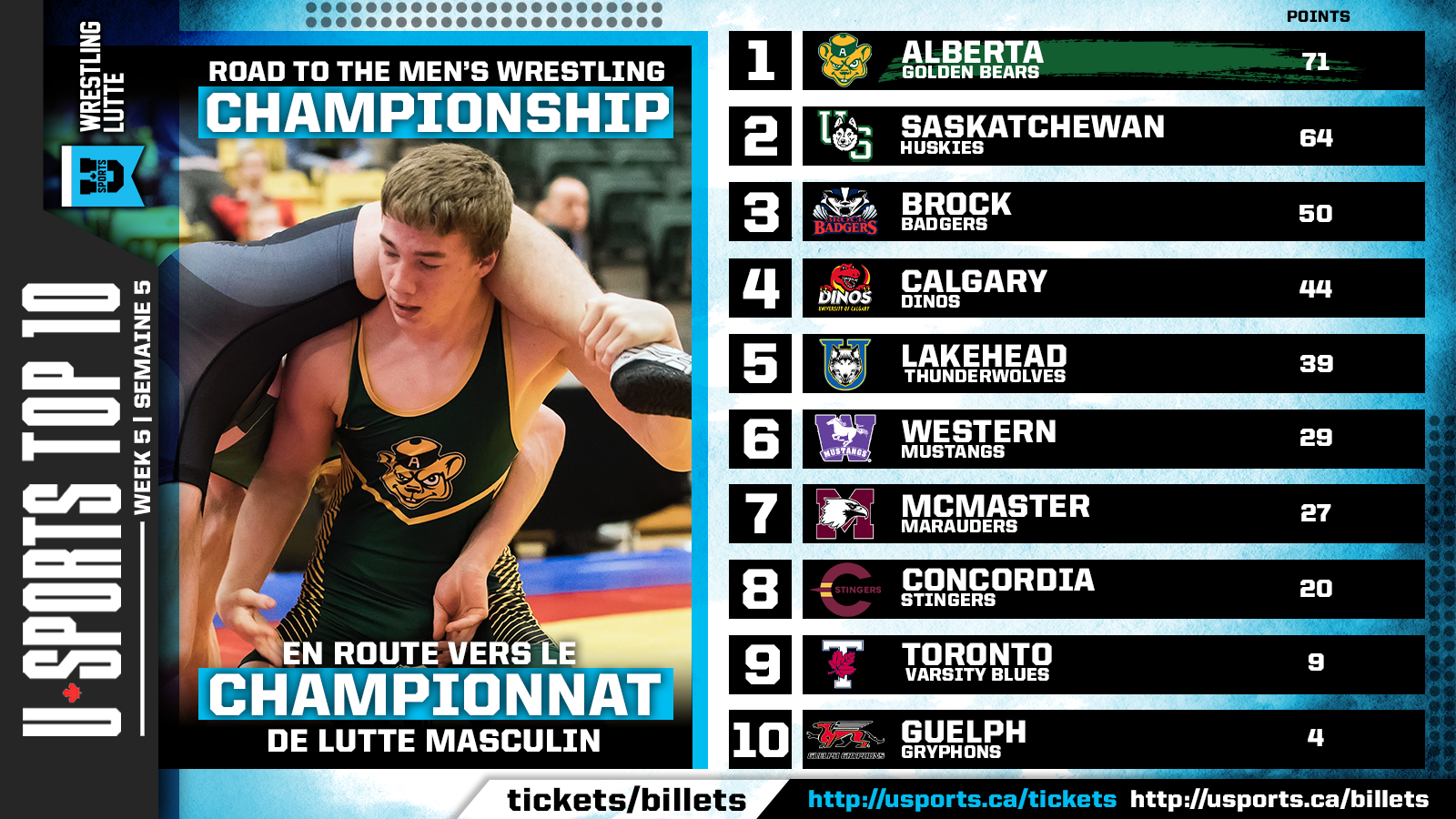 On the women’s side the No. 1 Alberta Pandas are once again the top crew as competition was idle as well. 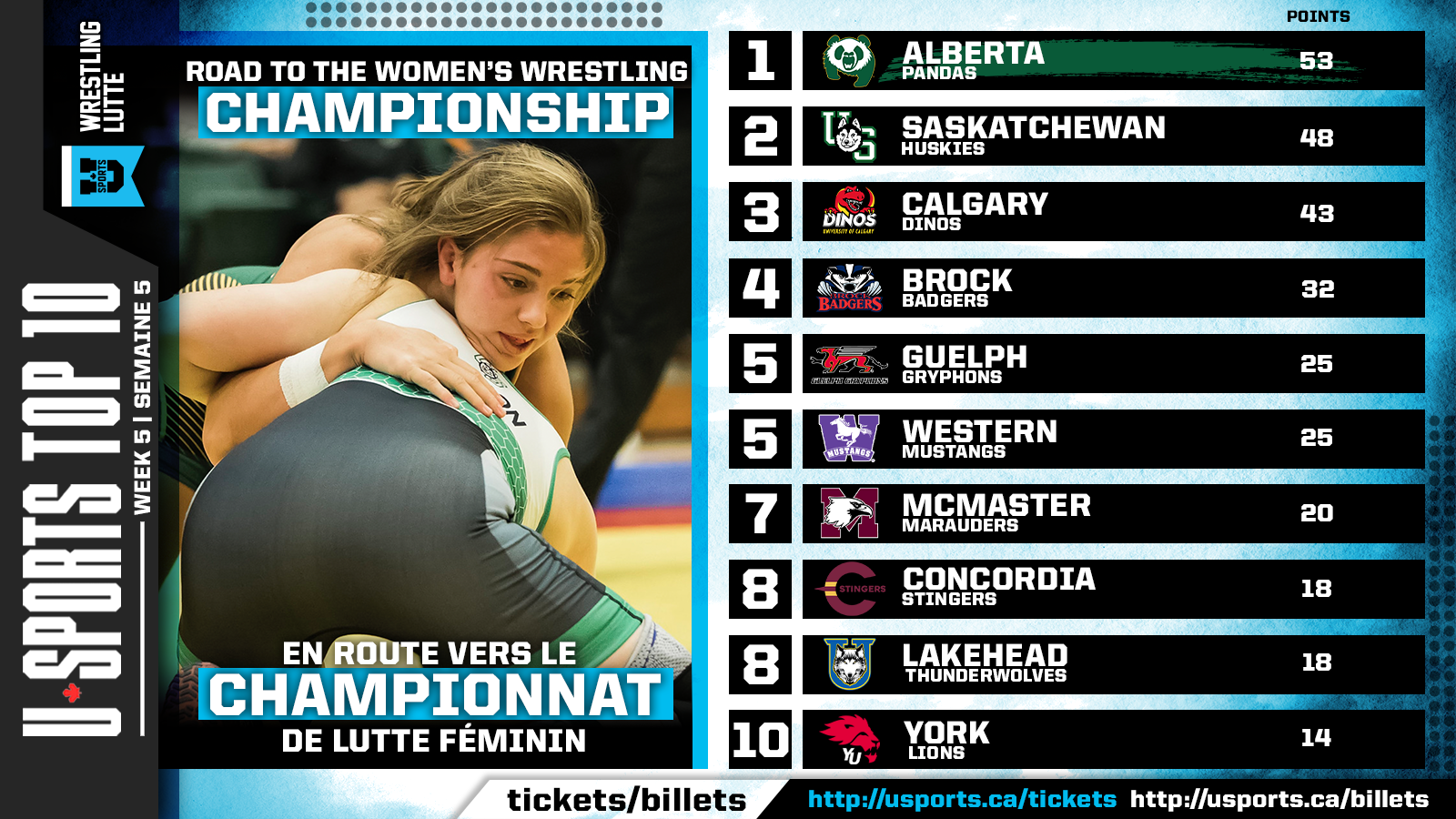