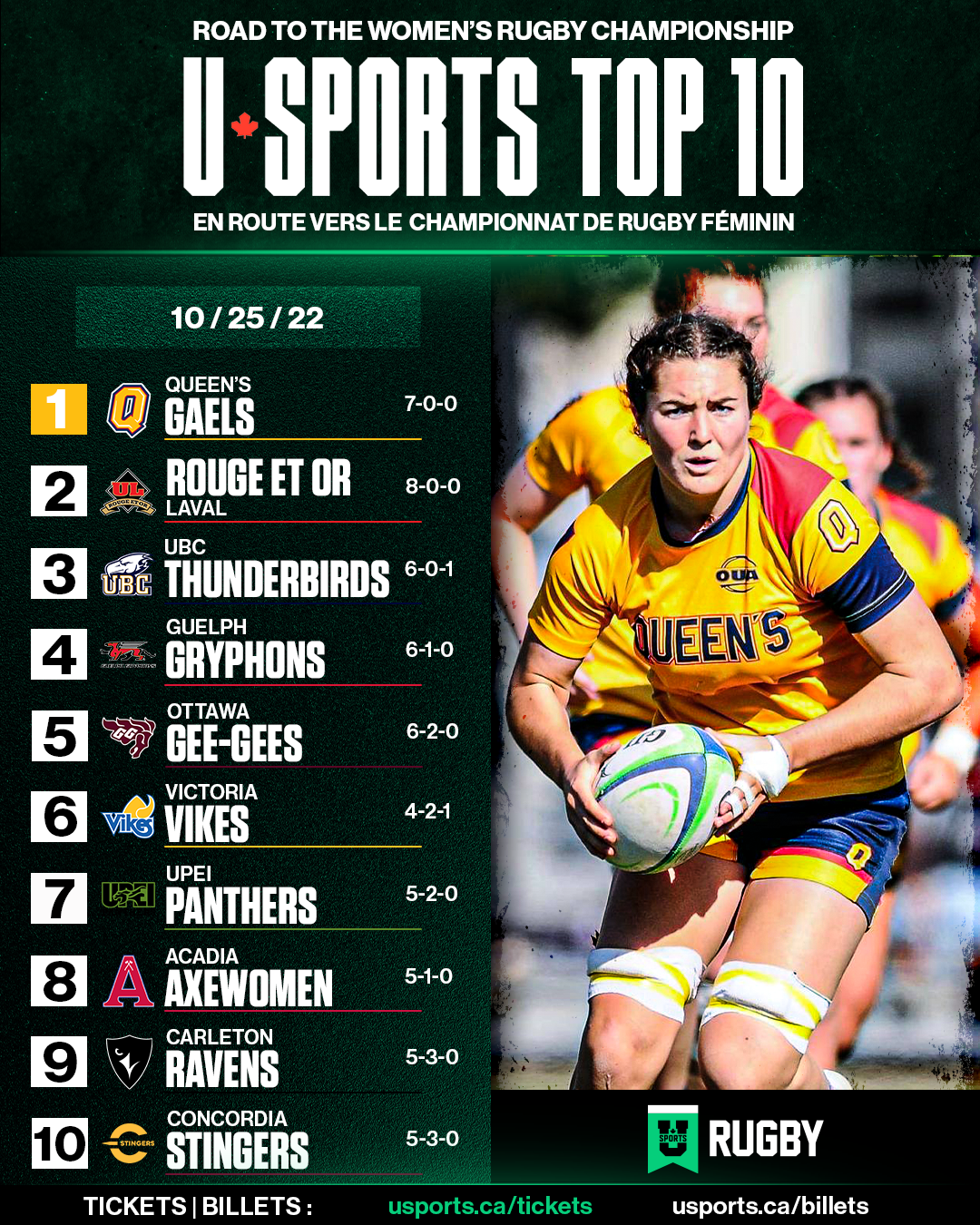 Following a close 14-12 victory over the StFX X-Women on Thursday, No. 7 UPEI Panthers clinched their first finals berth since 2006 and will face No. 8 Acadia Axewomen on Wednesday for the AUS conference title.

In OUA action, No. 1 Queen's is returning to the OUA Championship game after a 90-0 win over the Western Mustangs in the semi-finals Saturday at Nixon Field. Lizzie Gibson, who led the country in scoring in the regular season with 176 points, led the way offensively with one try and 10 conversions for 25 points.

The Gaels will be in action next weekend in what will be a re-match of the 2021 OUA title game as they host the defending OUA champions No. 4 Guelph Gryphons at Nixon Field for this year's edition of the conference final. 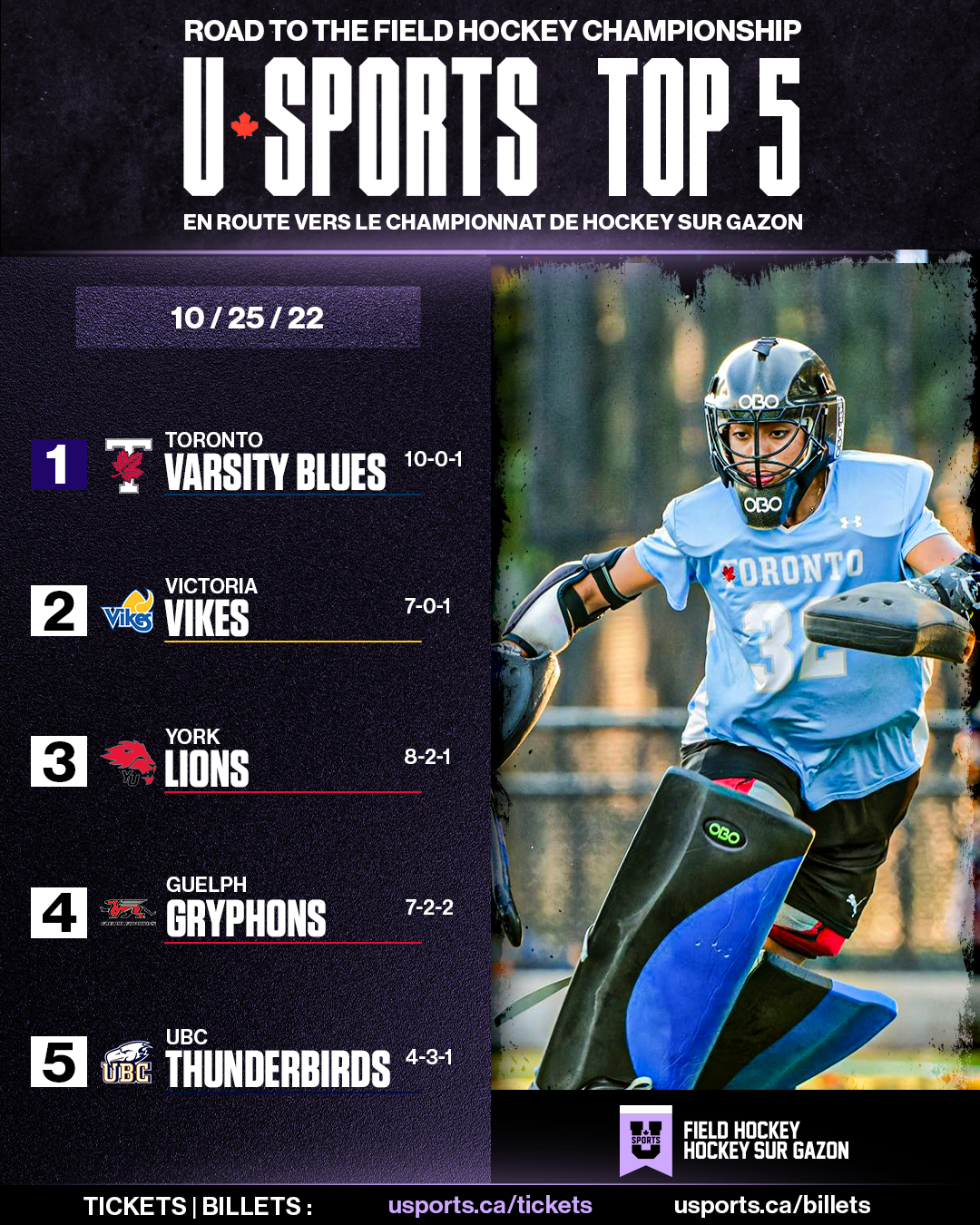 In another strong offensive effort, the No. 1 University of Toronto Varsity Blues (9-0-1, 1-0-0) field hockey team defeated the Western Mustangs 5-0 at Back Campus Fields in Toronto on Saturday. With the win, the Blues secured their place in the OUA Championship for the third-straight season.

The Blues will host the Lions in the OUA Championship on October 29.

In Canada West action, the No. 2 Victoria Vikes (7-0-1) added another CW banner over the weekend, with the women's field hockey team capturing the program's fourth-straight conference title following back-to-back wins over No. 5 UBC Thunderbirds (4-3-1). 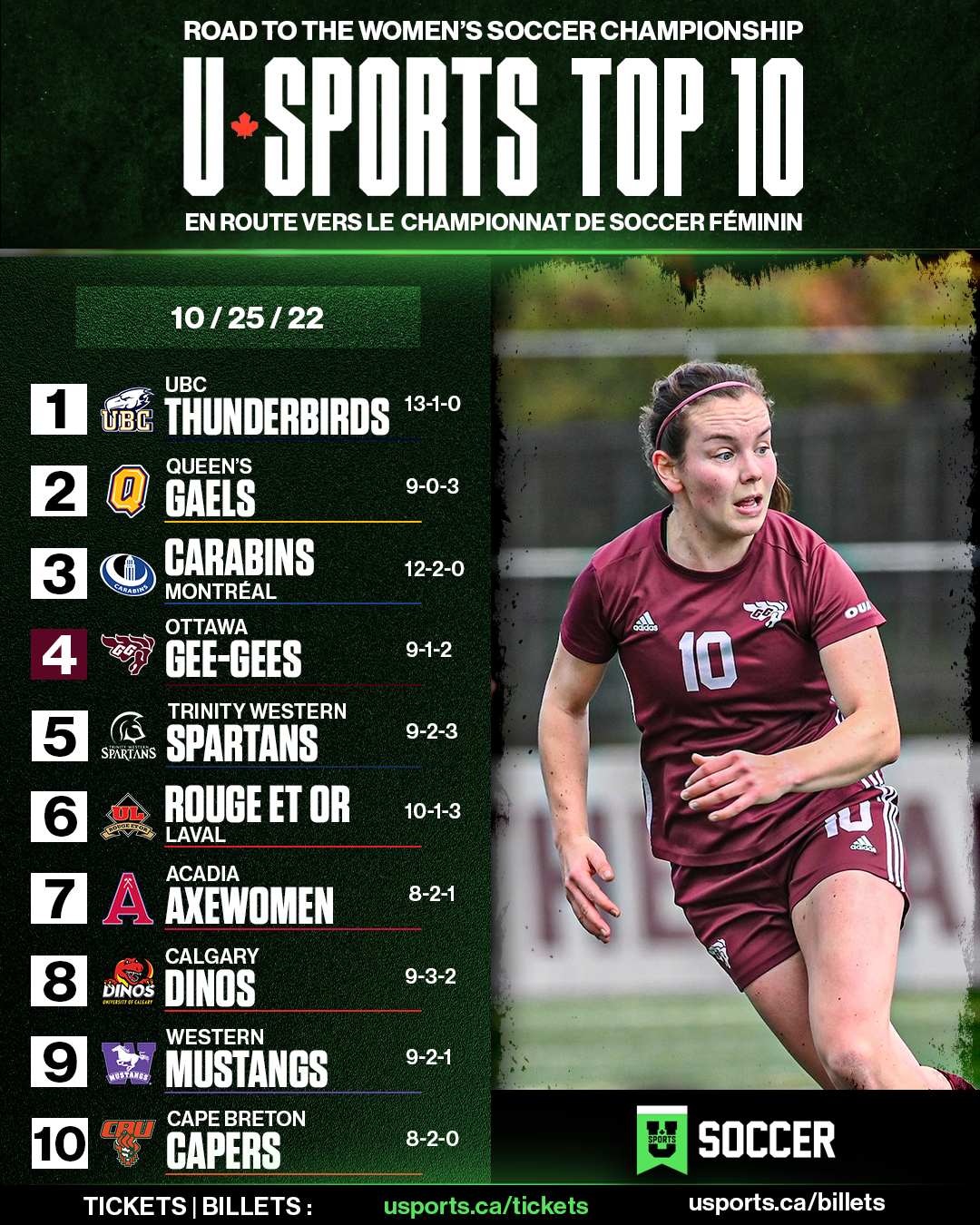 In Women's Soccer, the previously ranked No. 2 Ottawa Gee-Gees (9-1-2) closed out the OUA regular season with a 0-0 draw against RMC, dropping two positions to No. 4.

The Queen's Gaels (9-0-3) finished their regular season undefeated with a 7-0 win against the visiting Laurentian Voyageurs Sunday at Richardson Stadium, moving into No. 2. The UBC Thunderbirds (13-1-0) remain atop the rankings. 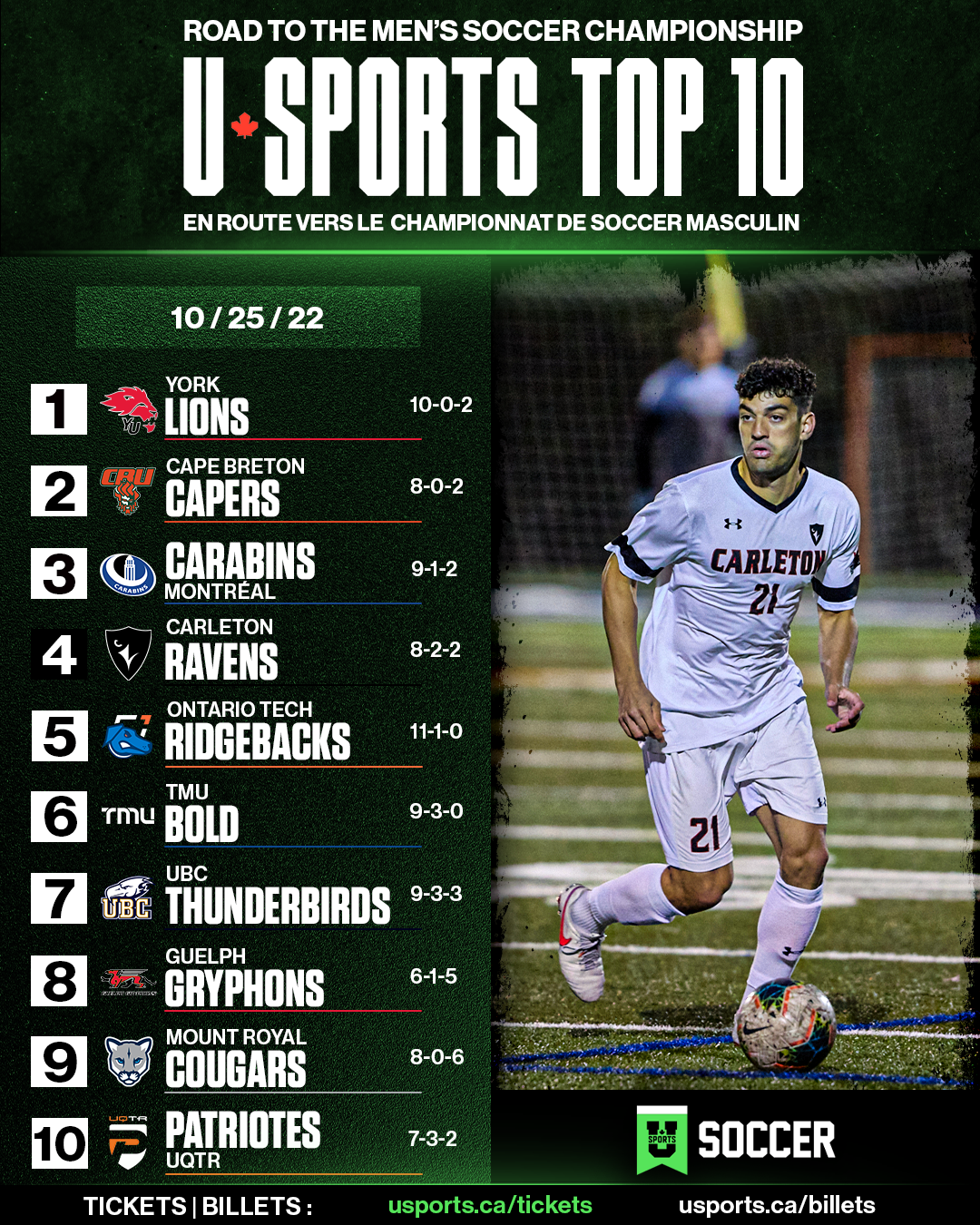 Playoff soccer kicks off the week of October 31. 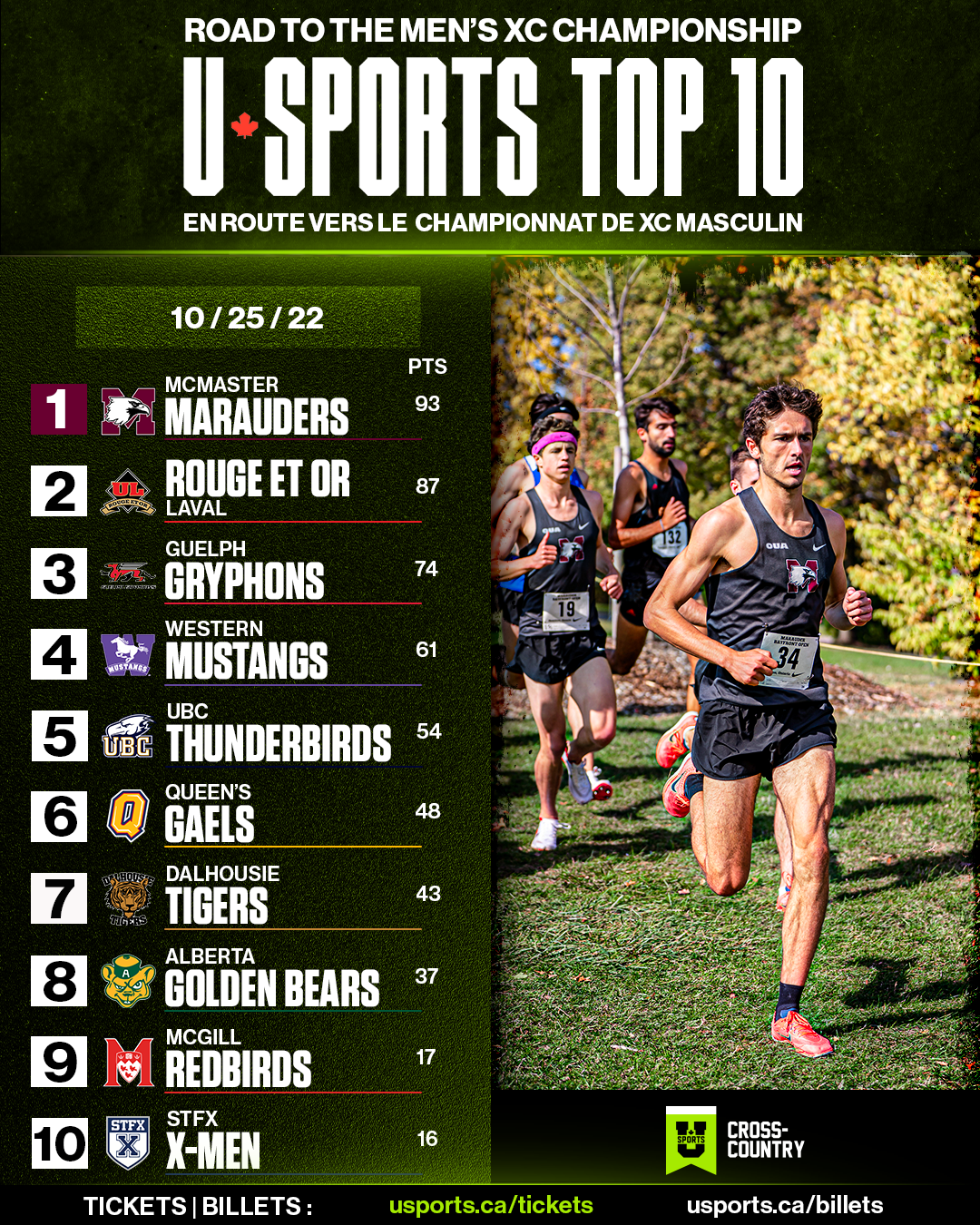 For many U SPORTS cross-country teams, competitions were at a standstill as athletes gear up for conference championships this week.

Men's Cross-Country Top 10 saw a shuffle in the middle of the pack as No. 5 Queen's Gaels (60 points) inched ahead of No. 6 UBC Thunderbirds (59 points) to move up one position. The McMaster Marauders remain atop the ranking with 98 points. 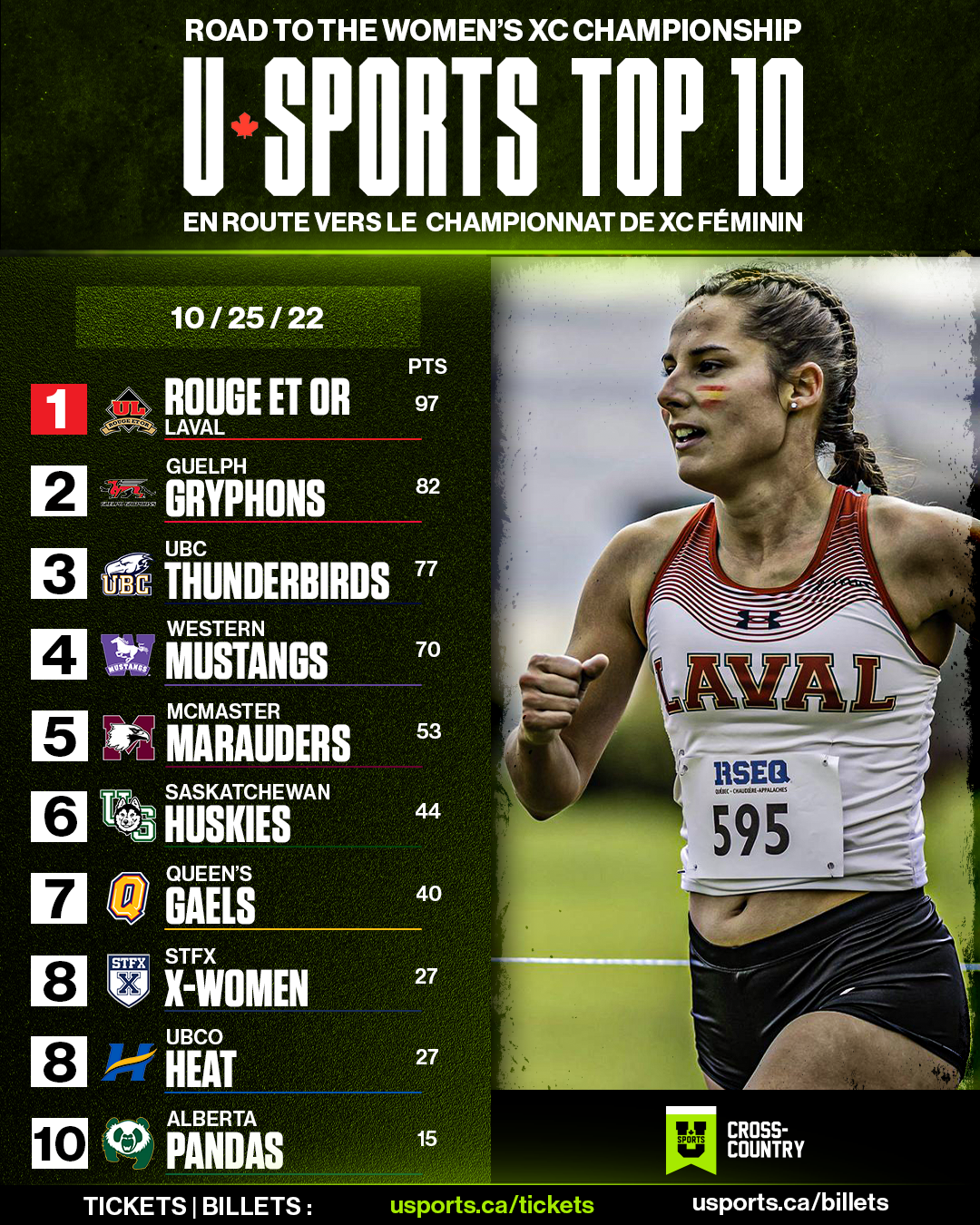 On the women's side, the defending RSEQ Champion Laval Rouge et Or (97 points) lead the ranking by 15 points over No. 2 Guelph Gryphons (82 points), while the rest of the ranking exhibited some movement. 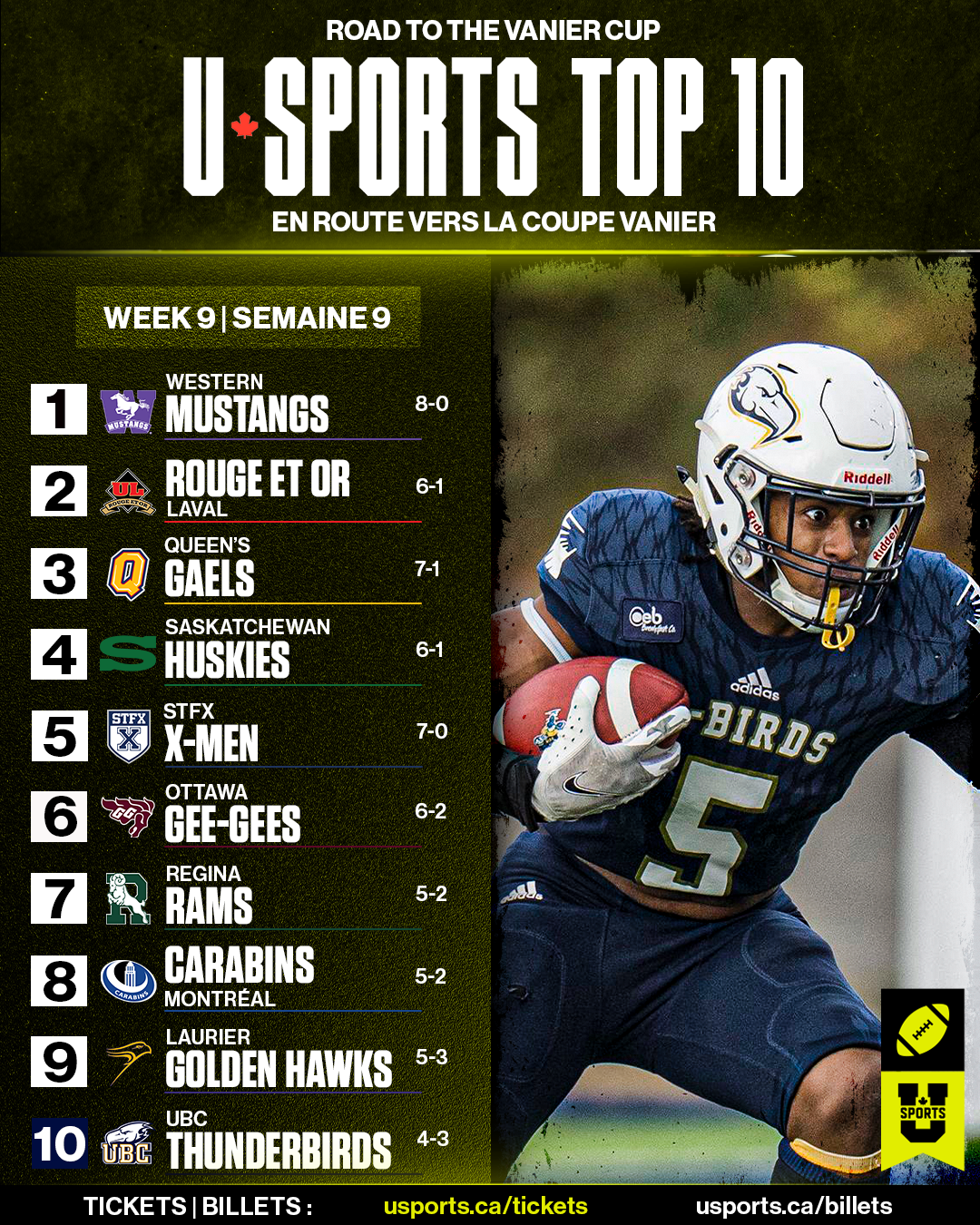 Three touchdowns from UBC running back Isaiah Knight and a fourth-quarter defensive performance for the ages saw the UBC Thunderbirds (4-3) secure a berth in the Hardy Cup playoffs with a 35-29 win over the Saskatchewan Huskies (6-1) Saturday afternoon, ending the Huskies' undefeated record.

Following Saturday's victory at the Thunderbird Stadium, No. 10 UBC entered the U SPORTS Football ranking for the first time this season. Saskatchewan dropped two positions to No. 4. 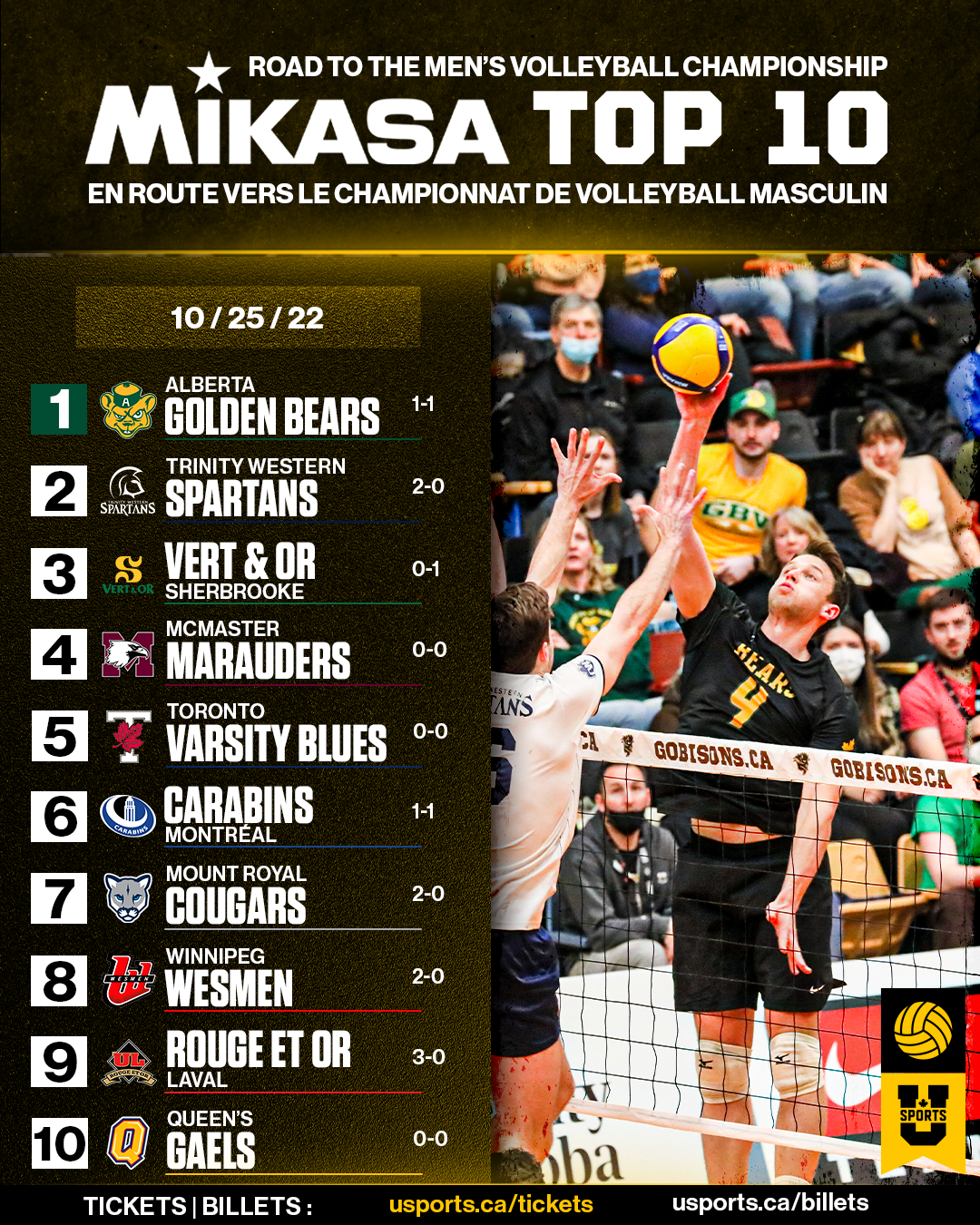 Men's Volleyball Top 10 is officially underway, and the 2021-22 U SPORTS Men's Volleyball defending champion Alberta Golden Bears open at No. 1 despite a 3-0 home loss to No. 10 Saskatchewan Huskies, the first home loss since 2019. However, the Bears reversed Friday's defeat with a 3-0 win at the Saville Centre on Saturday, and both teams moved to a 1-1 record on the young 2022-23 season. 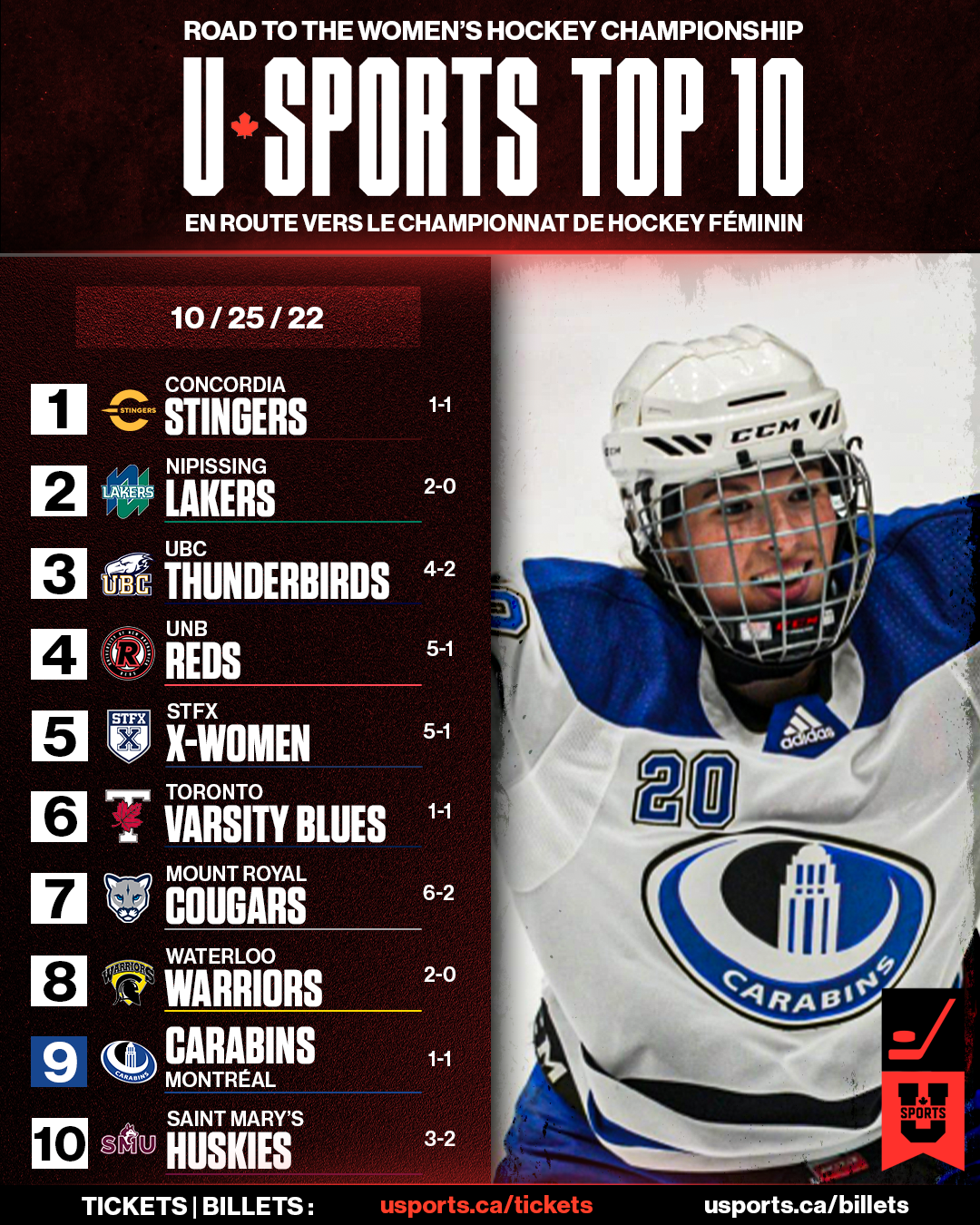 In Women's Hockey, No. 9 Montreal Carabins (1-1) second-year forward Audrey-Anne Veillette led the Blues to a 4-2 victory over the defending U SPORTS champions No. 1 Concordia Stingers (1-1) on Friday to claim a spot in the U SPORTS Women's Hockey Top 10. The kinesiology student scored a hat trick with a goal nine minutes into the first period and back-to-back goals in the 18th and 19th minutes of the third period.

The No. 2 Nipissing Lakers (2-0) women's hockey team is off to a perfect 2-0 start, thanks to a strong weekend on the road. The Lakers defeated the York Lions 5-2 Friday night before wrapping up their weekend with a 4-1 win over the TMU Bold Saturday in Toronto. The Lakers jumped three spots to No. 2 in U SPORTS Women's Hockey. 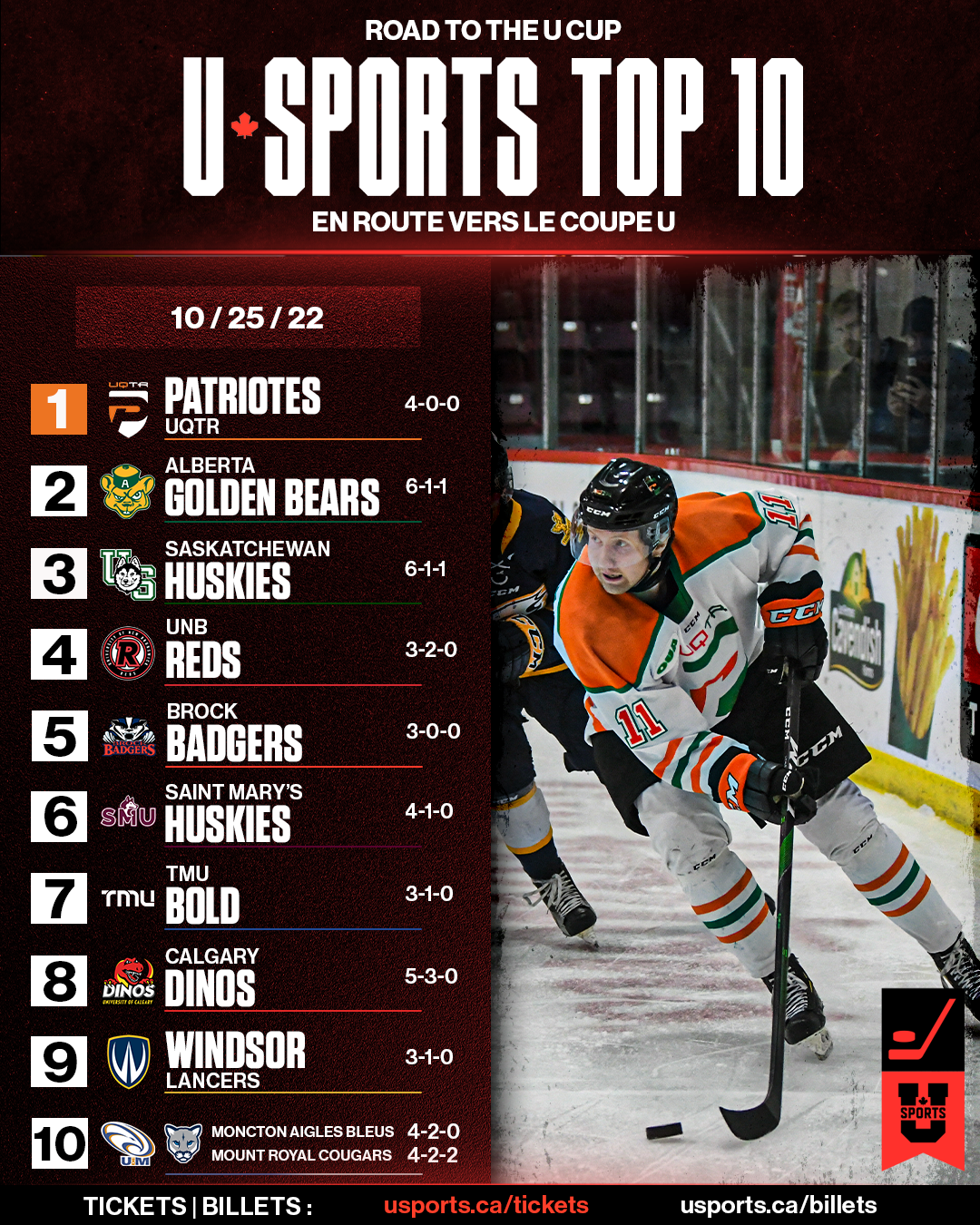 Defending U SPORTS champion UQTR Patriotes (4-0) is this week's team to beat after double road wins over the Nipissing Lakers on Friday and Saturday. Game one saw a close 3-2 finish, but the Patriotes came back with a vengeance and doubled the score, 6-3, on Saturday to claim the top of the Men's Hockey ranking.

In a Top 10 weekend showdown between two historic rivals, the now-ranked No. 2 Alberta Golden Bears (6-1-1) faced the No. 3 Saskatchewan Huskies (6-1-1) for a back-to-back tilt in Canada West action. On Friday, Saskatchewan outscored the Golden Bears 5-2 before Alberta claimed a 2-1 victory on Saturday.