When the Waterloo Warriors women’s basketball team beat the TMU Bold 68-65 back on November 11, it was a noteworthy victory for a number of reasons – it was head coach Jessica Roque’s first win against her former team, a huge triumph over the defending national champs, and a statement to the rest of the OUA that the Warriors would be a formidable force in 2022-23. But it wasn’t noteworthy for being the only Warriors victory of the night – in fact, it wasn’t the only Warriors victory of the night in that building.

Just two floors above Coca-Cola court at TMU’s Mattamy Athletic Centre, under the familiar and famous rafters of the former Maple Leaf Gardens, Waterloo forward Madison Prichard ripped home an overtime winner to give the Warriors women’s hockey team a 1-0 victory of their own over the Bold. Meanwhile, some 1300-plus km away, the Warriors women’s volleyball team finished off a dominating four-set victory over the Lakehead Thunderwolves to stay undefeated in the young season.

As it turns out, that Friday evening in early November was a bellwether of things to come, in what was a dominating first half from the trio of Warriors women’s teams. At the exam and holiday break, they own a combined record of 26-6, and have generated plenty of buzz around women’s sports – both on-campus, and across the OUA landscape.

“In all three programs, we have great leadership and coaching,” said Roly Webster, Director of Athletics and Recreation. “They’ve worked hard to bring in top talent. All three rosters have evolved, and we have a great mix of veterans and young, talented student-athletes.” 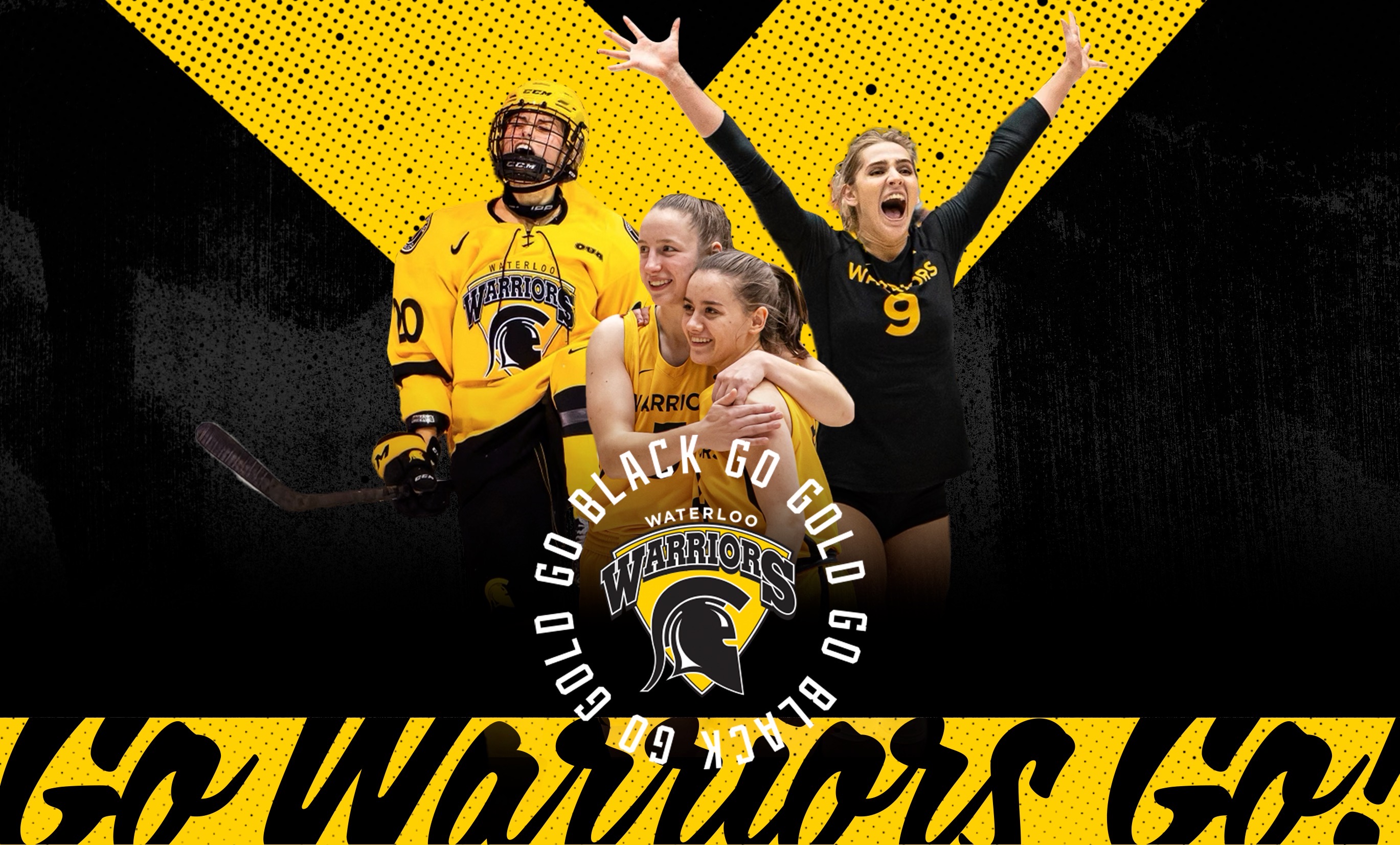 While all success at this level starts with coaching and recruiting talented athletes, there are plenty of ways to ascend to the top of the OUA. For the women’s volleyball program, it’s about repeating opportunities and sustaining success at the highest level: under the leadership of head coach Richard Eddy, the Warriors have had five straight playoff appearances and a provincial bronze medal in 2019. Now, the goal is to give themselves a chance each season to claim some hardware.

“When I first got here, it was about building the culture to have success, and attracting the right kinds of student-athletes that can succeed at Waterloo,” said Eddy, whose team sits at 8-2 through the first half of the season. “We’re not there yet, because we haven’t won a banner. But now that we’ve had some success, it’s a testament to the living identity of the program that we have  tried to create.”

The story is somewhat similar for the women’s hockey team: Shaun Reagan is one of the longest-tenured head coaches in the OUA, and his nationally ranked team has an 11-3-0 record at the break. The Warriors have had a winning record in six of their last seven seasons, but Reagan and his staff have had to evolve their program into a faster, higher-octane version that mirrors the evolution of the women’s game at the Canadian university level – the Warriors are the OUA’s top offensive team, and they own a league-best +25 goal differential through 14 games.

“It kind of happens organically,” said Reagan of his program’s evolution. “At one time, we had to coach a more defensive, system-oriented game. But as we’ve recruited more offensively-skilled players, we’ve wanted to be more creative. We talk a lot about attacking off the rush, and we want to let our players run a little bit.”

For Roque, her job is markedly different. After spending four years as the lead assistant for Carly Clarke at TMU (then Ryerson), she was hired by the Warriors in 2020 to continue to rebuild a struggling women’s basketball program that hadn’t reached the playoffs since 2008. As if the job wasn’t daunting enough, the COVID-19 pandemic cancelled Roque’s first season. But now, with her club at 7-1 and near the top of the OUA standings, she thinks the auspicious start might have been a blessing in disguise.

“The pandemic kind of expedited things,” said Roque, who led the Warriors to a 13-7 mark last season. “We had more downtime to set our culture. We didn’t have games, so we had time to just talk as a staff about our communication. It was a chance to reinvent ourselves as a program, and our girls have done a tremendous job of being bought in.”

This scorching-hot start from the trio is more a convergence of happenstance than it is formulaic; there isn't a single blueprint for three women’s programs to all have this level of success in the same two-month span. But it's not exactly accidental, either: over the past several years, there's been an increased focus – both at Waterloo’s athletic department and elsewhere – to start repairing the historical inequities that often saw women’s sports relegated to second billing.

“When you look at the history of female sport, it wasn’t equitably funded, so there wasn’t an equitable opportunity for success,” said Webster. “There weren’t as many great student-athlete experiences for females, which ultimately defines their affinity as an alum.”

What Webster describes was an entrenched cycle that kept women’s programming underfunded. Historically, teams would rely heavily on alumni donations to fund their individual programs. But, because women’s teams were often seen as the undercard to men’s sports, it meant a less fulfilling student-athlete experience for the women on those teams. And when those female student-athletes graduated, they were often less compelled to donate – which kept the operating budgets of women’s teams lower than their male counterparts.

The systemic issues were deeper than just one athletic department, but Webster and the staff at Waterloo were well aware of the inequities – and they made it a priority to rectify some of them.

“We’ve really worked at increasing funding for AFAs (academic financial awards) across the board, for both men’s and women’s teams. But we’ve prioritized female sport with our corporate partners, to try and bring equity,” said Webster.

“U SPORTS as a whole does a pretty good job of parity between the genders,” added Roque, who’s a member of the OUA’s Women in Sport committee. “But when you put your money where your mouth is like we’ve done here, it certainly helps a lot.”

What helps, too, is the once-in-a-generation abundance of female superstars clad in black and gold. Veteran setter Clare Gagne and West division MVP Sarah Glynn are once again leading the way for women’s volleyball. Forwards Leah Herrfort and Tatum James are the top two scorers in the OUA women’s hockey ranks. And Vanessa Hughes has led the women’s hoops squad all season, sitting second in the OUA with 20.5 points per game. It’s not limited to these three teams, either – Marley Dowling is the three-time OUA field hockey goalkeeper of the year, while track and field star Hannah Blair is the reigning uWaterloo female athlete of the year, and one of the most dominant heptathletes in the nation.

But it’s one thing to recruit talent, and another thing entirely to foster the development of a well-rounded person – especially in the realm of sport, which is still very much a male-dominated industry. So, the department has also increased the focus and funding to ensure coaching staffs have females in a position of power and influence.

“For too long, females haven’t had that opportunity,” said Webster. “We want our daughters to see that there’s a path for them, to receive mentorship and guidance from someone who sat in their stall, and knows their perspective.”

“I was coached by men my entire life, up until university,” added Roque. “So having visible female staff members is pivotal. There are people who have lived the experience of being a student-athlete, and they have nothing but knowledge to impart.”

Eddy and Reagan also see this importance, as all four of their assistant coaching roles on their teams are held by women – Laura Brown and Lauren Wong serve as assistants on women’s volleyball, while former Warriors players Dollee Meigs and Amanda Smith share the bench with Reagan. It’s a principle that goes beyond sport for both men, as they recognize their roles in helping develop student-athletes for their post-sports careers.

“When we pick assistant coaches, we look for people with a variety of skills, and who knows what it’s like to be a student-athlete or a woman in a leadership role,” said Eddy. “It can illuminate the pathway for the girls on our team.”

“We’re trying to create the best student-athlete experience that we can, so it just makes sense,” added Reagan. “(Meigs and Smith) can relate to our players better than I can.”

For Meigs, who’s in her fourth year as Reagan’s full-time associate coach, she feels the responsibility to be a role model for current players that might want to stay involved in the sport after their playing days are over. But she also feels the support from Reagan and the department, as the trajectory of her own coaching career gets higher with each Warriors victory.

“I’ve learned from other women in higher positions,” said Meigs, who’s a member of the NHL Coaches Association Female Development Program. “I’ve looked up to my mom, who runs her own company, and coaches like Cherie Piper taught me that it’s our responsibility to lift up other women, and help them create their own space as they grow and try to become leaders in hockey themselves. Reags has always helped me grow as a coach in my career, and he’s my biggest advocate.”

Meigs and Smith also bring championship pedigree to their staff, having won an OUA title as players in 2014. These three women’s programs have never claimed a provincial championship banner, but Webster believes the structure, staffs, and rosters are now firmly in place to make a run at one – or two, or three.

“It’s easy to say, ‘we want to win championships,’” said Webster. “But our goal is to be competitive year after year, to give ourselves a chance. I think we’re right on track with all three programs.”