For the first time ever, the U SPORTS Men’s Hockey All-Star Team swept the Canadian World Junior prospects in their annual two-game series—an event that both teams say was for the benefit of the World Junior squad.

While most wouldn’t think to pair athletic success with losses, Shawn Bullock, senior manager of hockey operations at Hockey Canada, says his team’s pair of defeats to Brown’s U SPORTS squad were “outstanding,” as they helped determine which of the best Under-20 players to pick for the Canadian World Junior side.

The skill level, the speed, and the style of play that they were presenting was exactly what we needed to create an evaluation environment and expose some of our players that unfortunately didn’t make the program.

“The skill level, the speed, and the style of play that they were presenting was exactly what we needed to create an evaluation environment and expose some of our players that unfortunately didn’t make the program,” says Bullock of the U SPORTS All-Stars.

This competitive yet supportive relationship between the two sides —which holds strong on the female side as well, as the best U SPORTS women’s hockey players annually take part in Hockey Canada’s Summer Showcase each August —has been ongoing since 1988, with the U SPORTS All-Star Team serving as part of the Junior Team’s selection camp since 2015. 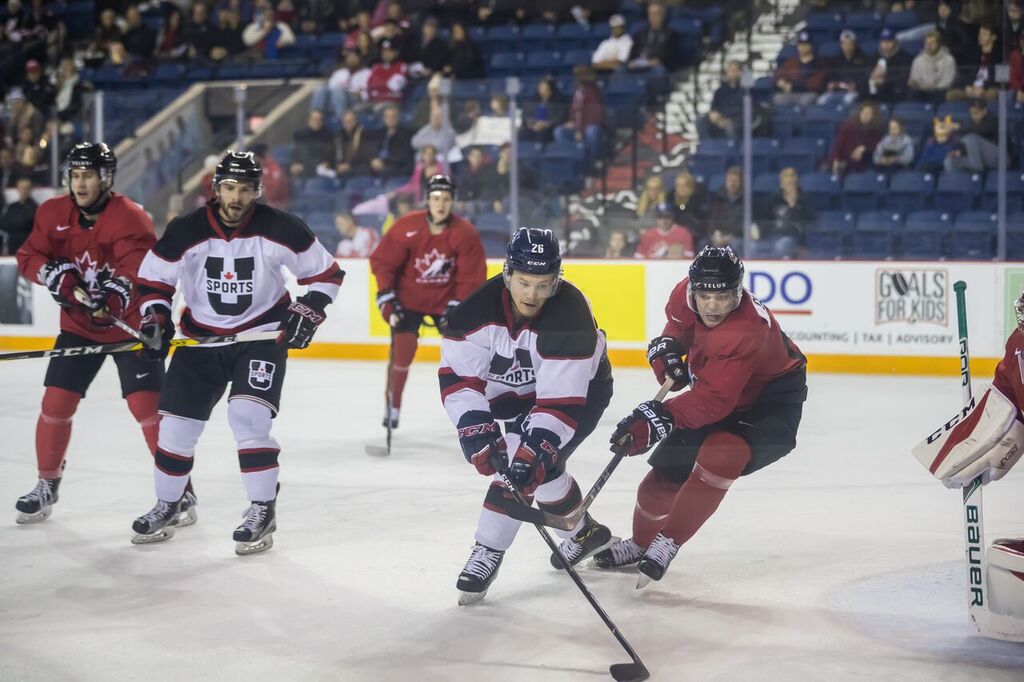 In the first year of the contests, U SPORTS took the first win, beating the Canadian hopefuls 5-4 in a shootout in Toronto. The next day, the Junior prospects got their redemption, beating U SPORTS 5-0. In 2016, the World Juniors swept the All-Stars, winning 5-3 on Day 1 and 3-0 on Day 2, with both games held in Boisbriand, Que.

This year in St. Catharines, Ont., following the Team Canada hopefuls’ 2016 success, Hockey Canada asked U SPORTS to up the challenge.

Typically, when the All-Star Team is chosen, the coaching staff needs to meet a specific quota, with a certain number of players coming from each conference. This year, Hockey Canada asked that U SPORTS scrap those geographical requirements and simply pick the top athletes in the country.

“They just picked the best players,” says Bullock of the selection changes. “They pushed our guys…and that’s what we wanted.” 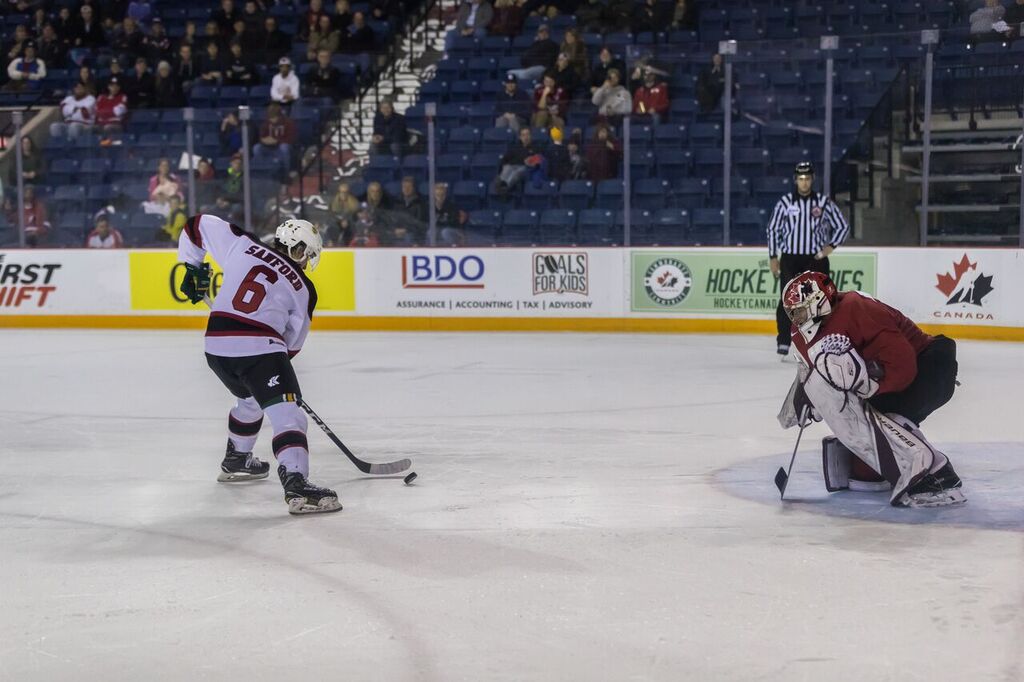 In addition to having more “freedom and flexibility” in picking his roster, U SPORTS head coach Brad Peddle of StFX – along with assistants Mark Howell of Calgary, Trevor Stienburg of Saint Mary’s and Patrick Grandmaître of Ottawa – made a point of adding more practices as well as team-building activities, such as visiting Niagara Falls and taking in a Buffalo Sabres game, to this year’s preparations.

As Peddle intended, these changes led to improved results for the U SPORTS All-Stars.

In the first contest of this year’s series, an early goal in the first period by Alberta forward Luke Philp and two empty-net goals at the end of the third allowed the U SPORTS athletes to secure a 3-0 win over their younger opponents.

The second match was much closer, as the two teams were tied 2-2 then 3-3 in the final period. Ultimately, though, with just 6.5 seconds on the clock, Alberta defenceman Jason Fram snuck one in for a 4-3 victory over the Junior prospects.

We’re really proud of the group. They really bought into how we had to play, and I think you saw, over the two games, a committed group in terms of just leaving it on the ice and playing with pride.

“We’re really proud of the group,” says Peddle, who served as U SPORTS’ assistant coach on last year’s All-Star bench. “They really bought into how we had to play, and I think you saw, over the two games, a committed group in terms of just leaving it on the ice and playing with pride.”

Regardless of the series results and of the three-year, back-and-forth rivalry, both sides of the ice insist that the U SPORTS-Hockey Canada relationship is mutually beneficial and important.

“It’s a great partnership that we have,” says Brown, providing the U SPORTS perspective. “We invest heavily to make that team successful, and Hockey Canada invests in us.” 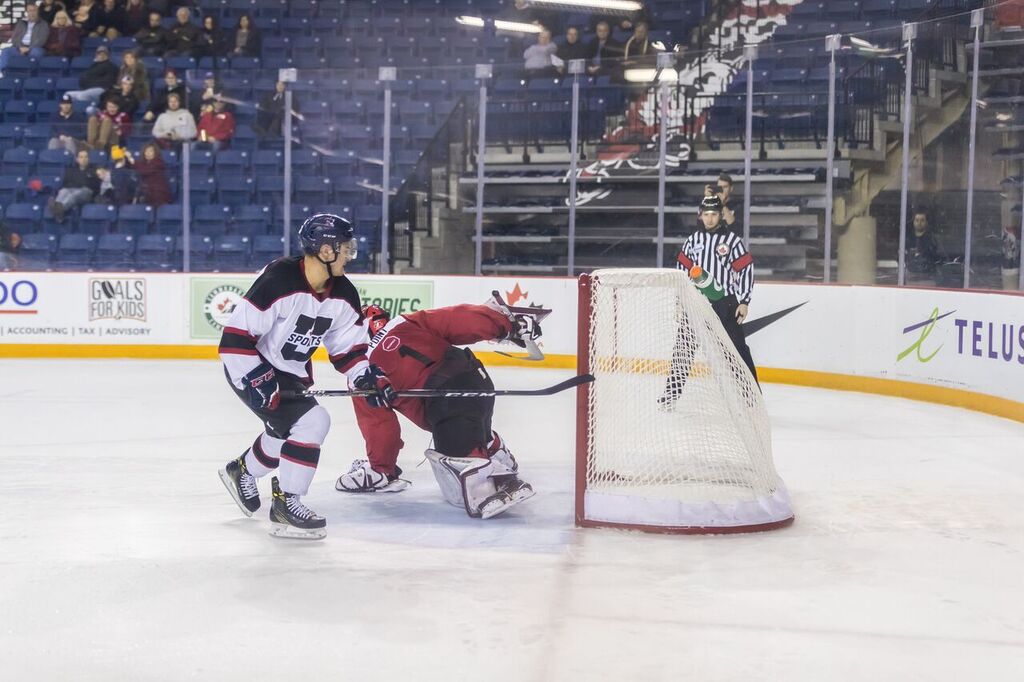 Bullock agrees, describing U SPORTS’ efforts to help select the Canadian Juniors as “perfect” and “tremendous.”

Following the series, Hockey Canada was able to narrow the players from 33 to 27, nearly finalizing the roster ahead of the upcoming IIHF World Junior Championship.

While these decisions are the key reason why this series was established, the games also help do something else: inform sports fans of the quality of U SPORTS athletics.

“They pushed our 18, 19-year-old athletes that are considered the best in the country, and in some cases, the best in the world,” says Bullock of the U SPORTS All-Stars, whom he says does not get the respect they deserve. “They pushed (us) right to the limits and won both games. So, I hope people took note.” 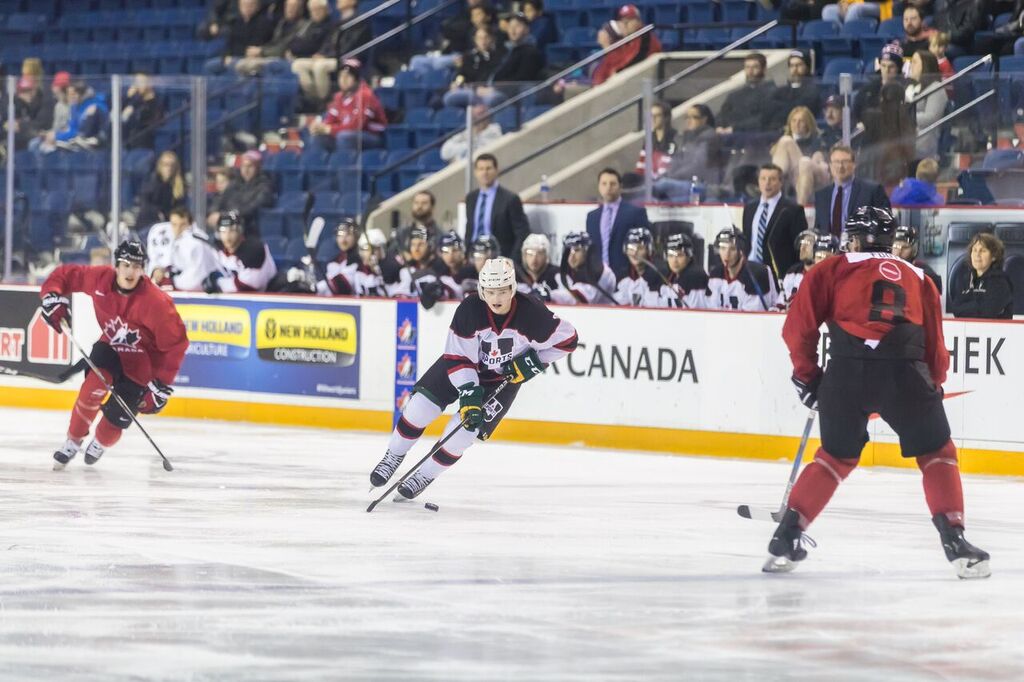 Following the pair of victories, U SPORTS was trending on social media while several news outlets reported the results throughout the country, suggesting Canadian university athletics may finally be getting the attention it’s proven to deserve.

When Brown began his role as U SPORTS President and CEO just over two years ago, it was his goal to make university sports in Canada more “relevant.” While he says the recent hockey publicity will help, he and the U SPORTS team are always striving to do more.

“It’s not going to be a home run; it’s not going to be one thing that does it. It’s every year you got to keep working harder,” he says, referring to the organization’s need to continue putting on events like the All-Star series.

Brown emphasizes that his team is committed to increasing awareness about the quality of U SPORTS athletics, while simultaneously nurturing relationships with Canada’s national sports organizations, like Rugby Canada, Canada Basketball, and the CFL. 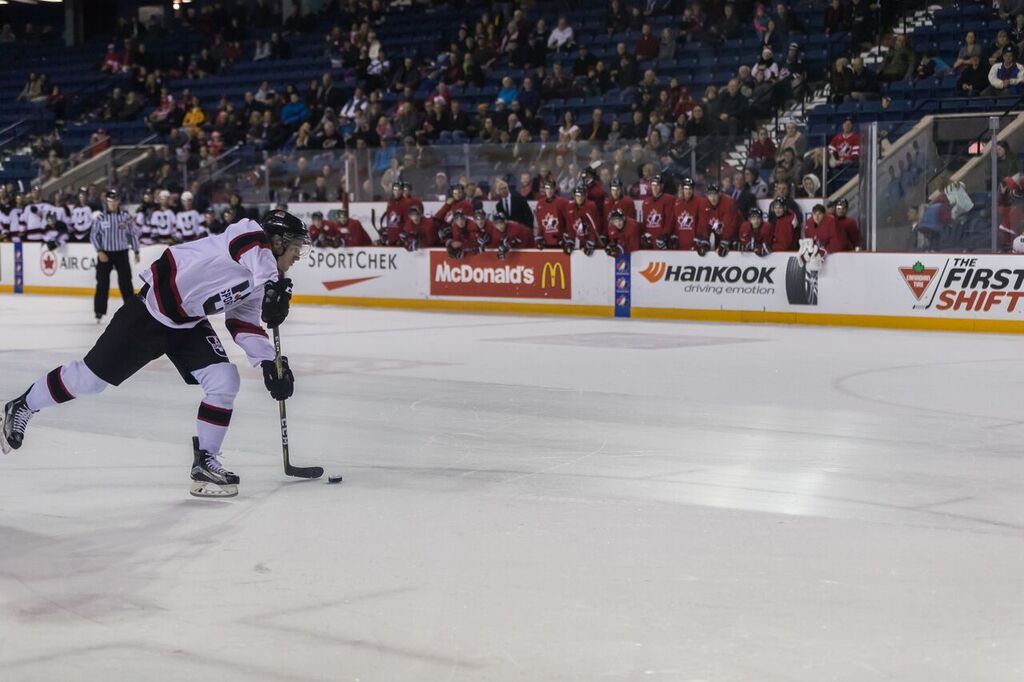 The U SPORTS leader has his eye on all Canadian sports, but with the Canadian Christmas tradition of supporting the World Juniors in the IIHF Championship competition fast approaching, Brown’s attention will predominantly be on hockey.

“I most definitely believe (Canada) will win gold, and (I) believe the U SPORTS hockey team will have played a small role in that victory,” he says. “I will be tuning into as many games as I can over the holidays—for sure all the Canada games.”

The 2018 IIHF World Junior Hockey Championship begins for Team Canada on Boxing Day when they take on Finland at 4 p.m. ET / 1 p.m. PT the KeyBank Center in Buffalo, N.Y.