U SPORTS Rankings: University of New Brunswick Reds open at No. 1 in Men’s Hockey

TORONTO (U SPORTS) – The University of New Brunswick Reds begin the season as the team to beat in Men’s Hockey.

In their most recent matchup, the Reds (4-0) beat Saint Mary’s Huskies (1-3) by a score of 5-2 after claiming a 4-1 victory earlier in the week over the No.5 Acadia Axemen. UNB visits the No.10 StFX X-Men (3-1) on Friday in hopes of keeping the unbeaten streak alive.

The 2019 silver medalist Golden Bears (1-1) begin the year in the No.3 spot, while the Saskatchewan Huskies (0-0) claim No.2 to start the campaign.

The men’s hockey rankings utilize a combination of the ELO Rating System and select media panels for the calculation of national rankings. 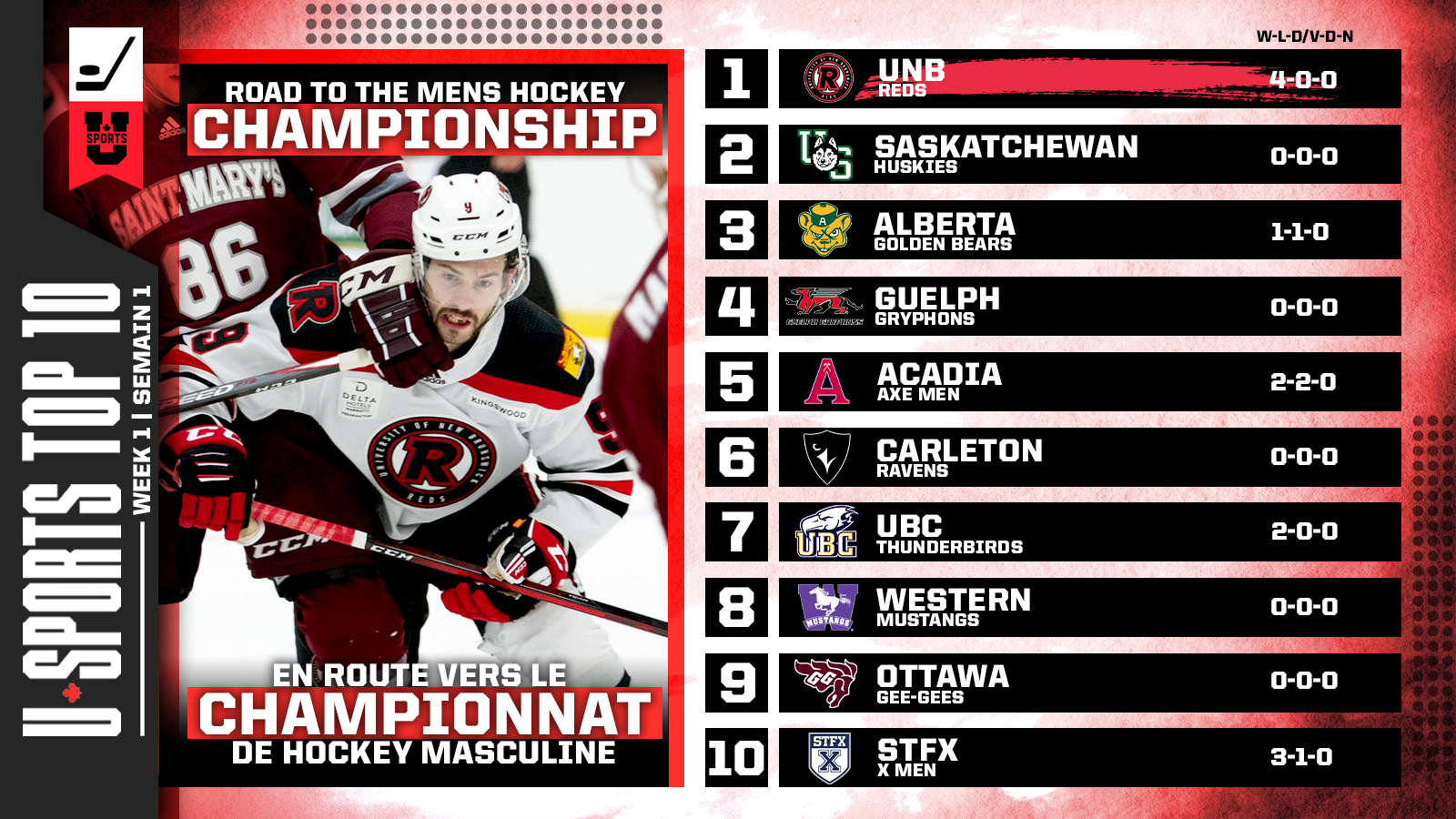 Women’s cross-country saw Laval move up the ranks, tying the Guelph Gryphons for the No.1 ranking after a strong showing at the AUS-RSEQ Interlock. Jessy Lacourse of the Rouge et Or lead the way with the fastest time. 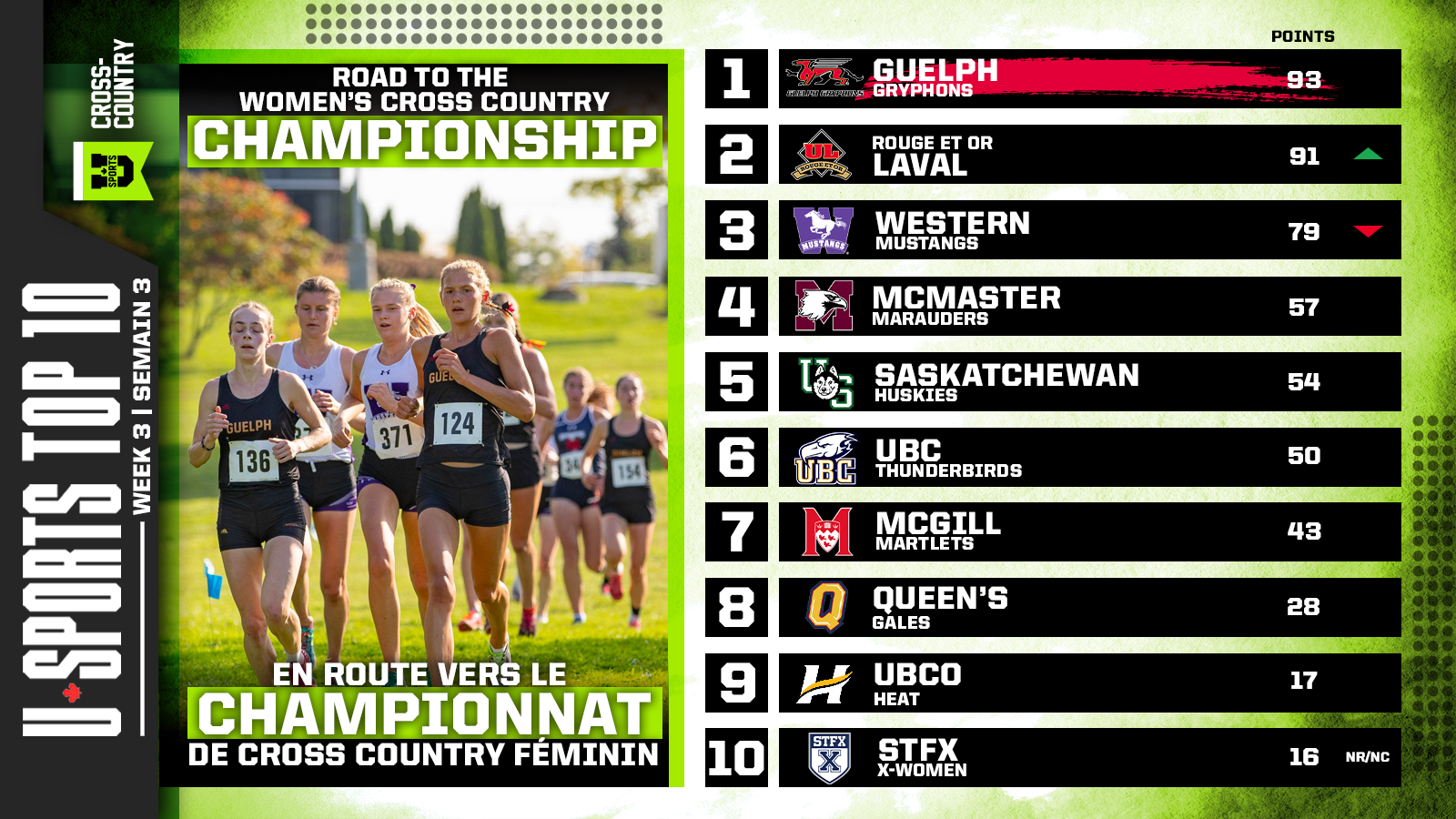 In men’s cross country, Laval also tied Guelph for the top spot in the rankings after dominating the podium in the AUS-RSEQ Interlock. Thomas Fafard led the pack, while teammates Jean-Simon Desgagnės and Jonathan Tedeschi finished second and third. 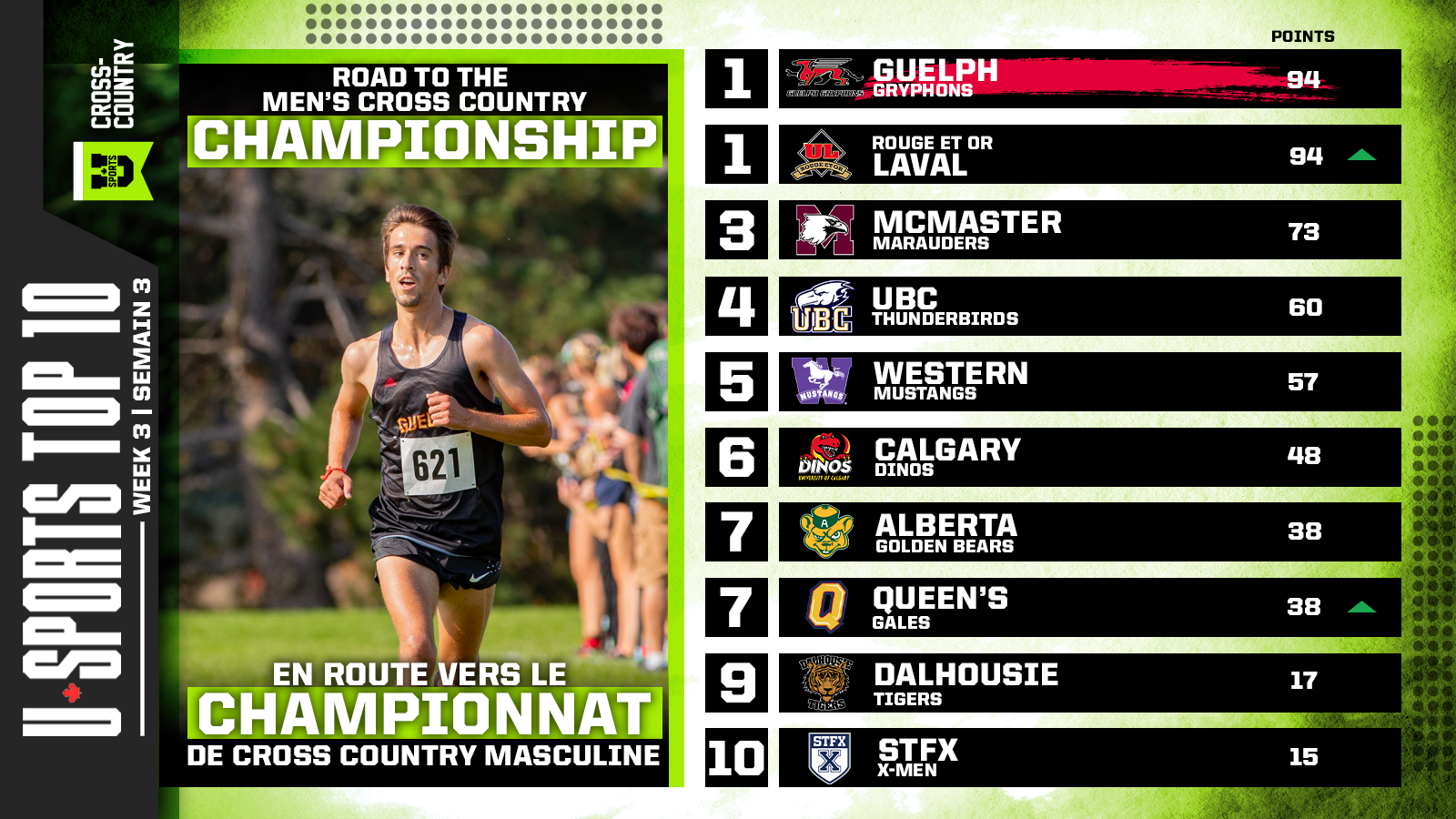 In football, the No.1 Montreal Carabins (5-1) remain atop the rankings after a 31-19 victory over the Concordia Stingers (3-3). Bert Beaulieu dominated for the Carabins, rushing for 151 yards and a pair of touchdowns.

The Manitoba Bisons (3-0) moved up two spots to No.4 after a gutsy come-from-behind victory over the Calgary Dinos (1-2), while the Laurier Golden Hawks (2-2) make it back into the Top-10 after blanking the McMaster Marauders (1-3) by a score of 22-0. 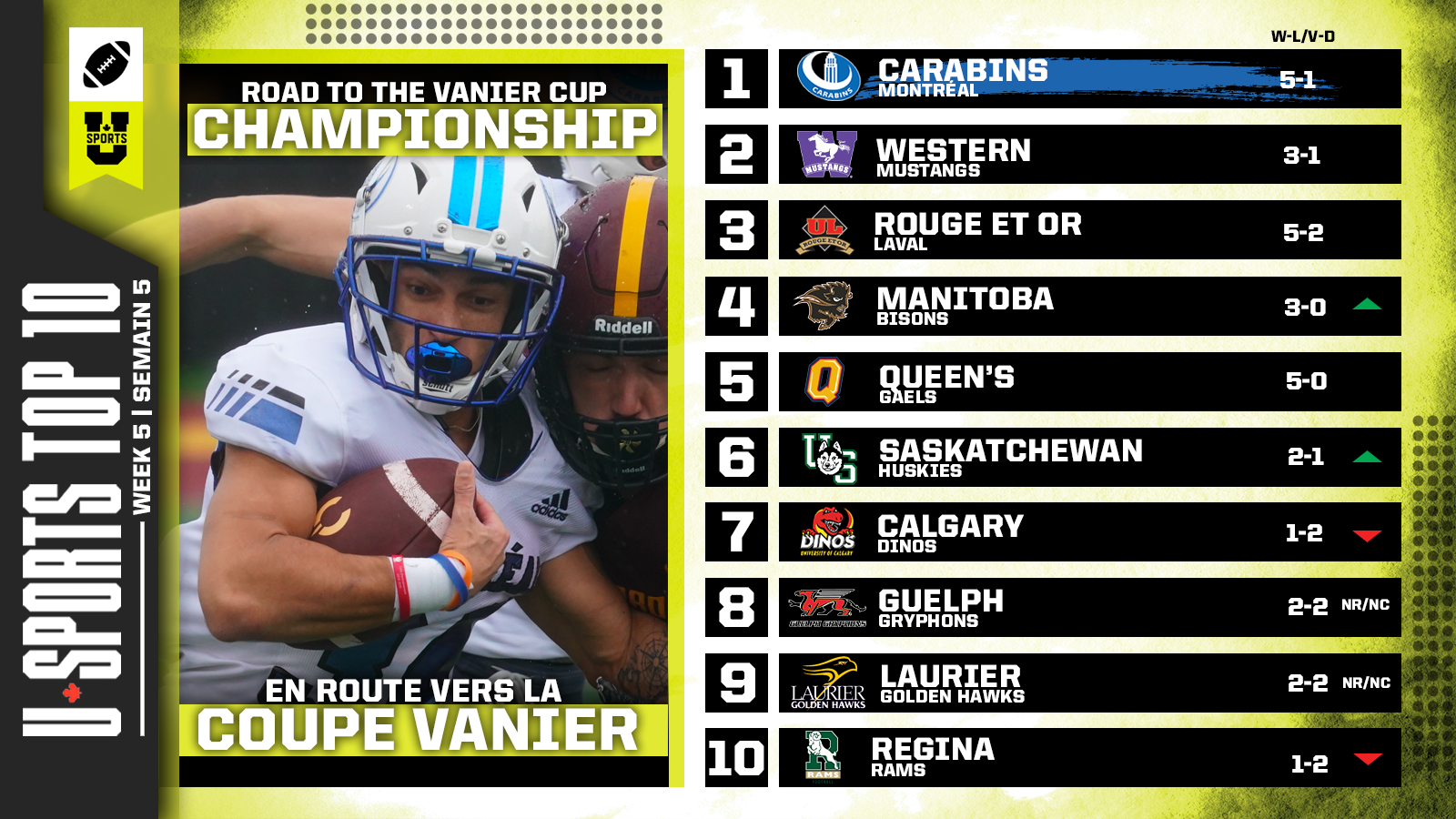 On the rugby pitch, the No.1 Laval Rouge et Or (6-0) and No. 2 Queen’s Gaels (3-0) hold steady in their respective positions, while the Acadia Axewomen jump to No.3 after taking down the StFX X-Women (3-3) to complete their undefeated season. The Axewomen will take on the winner of StFX and UPEI Panthers (3-3) in the AUS finals. 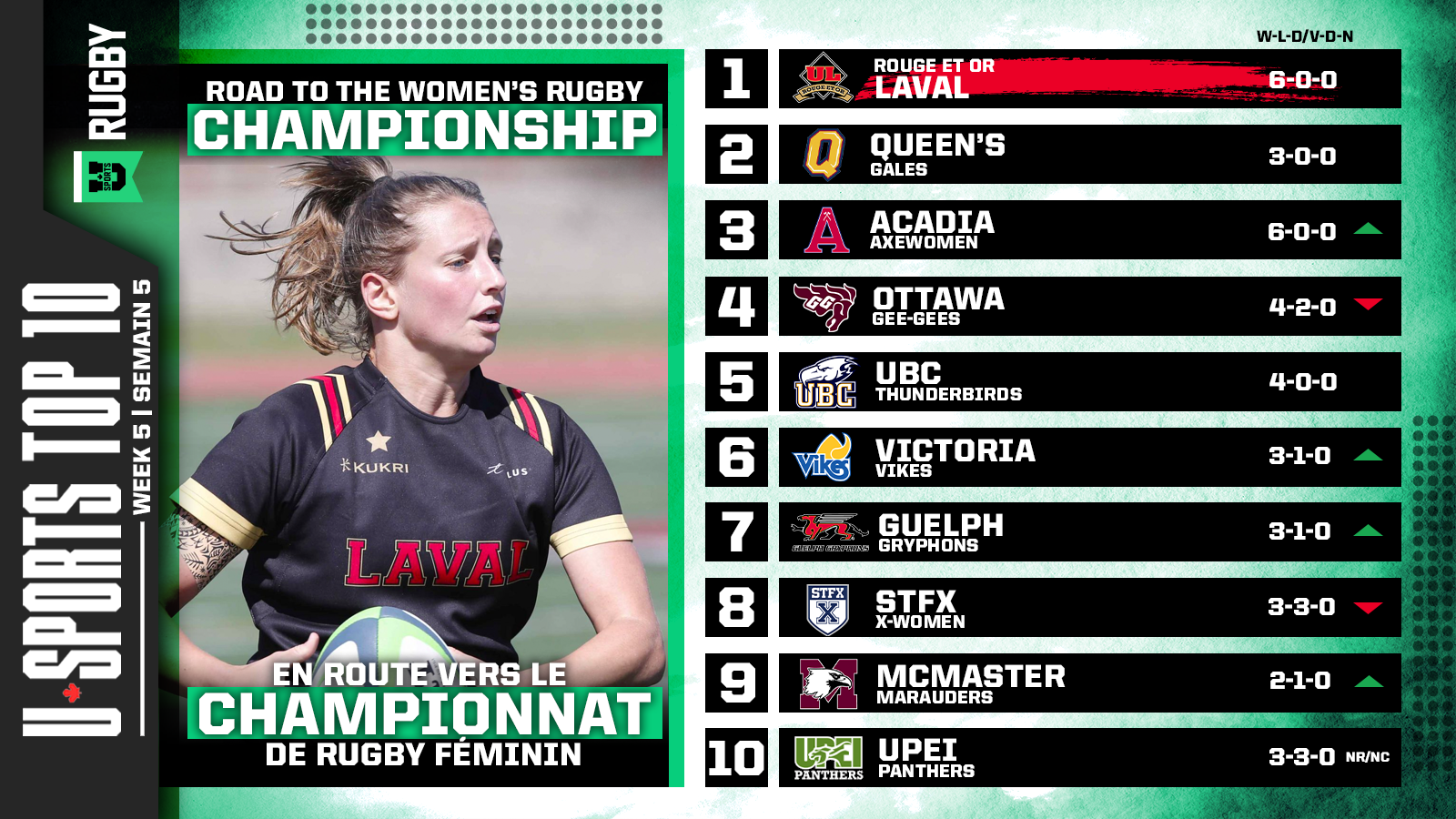 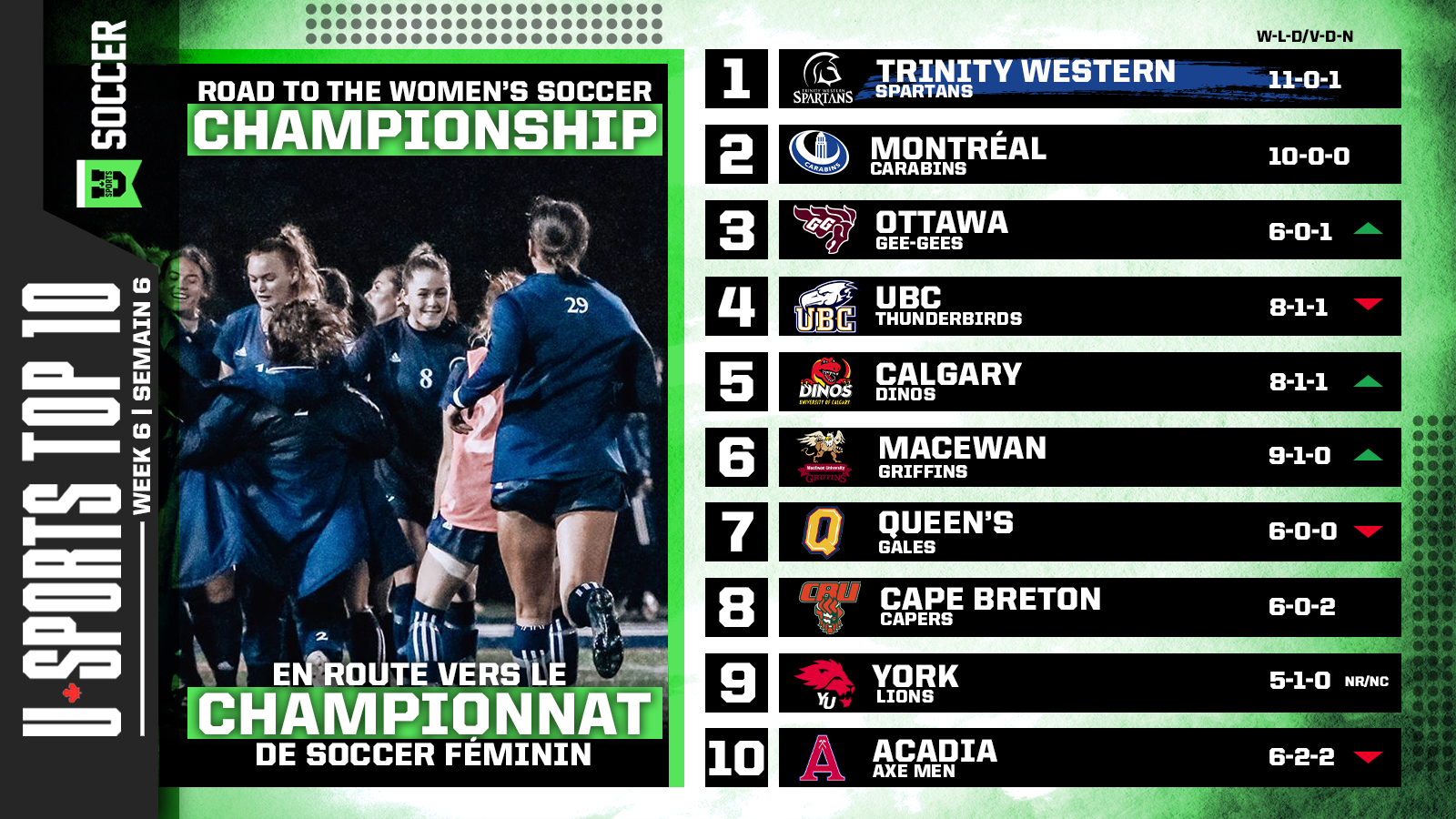 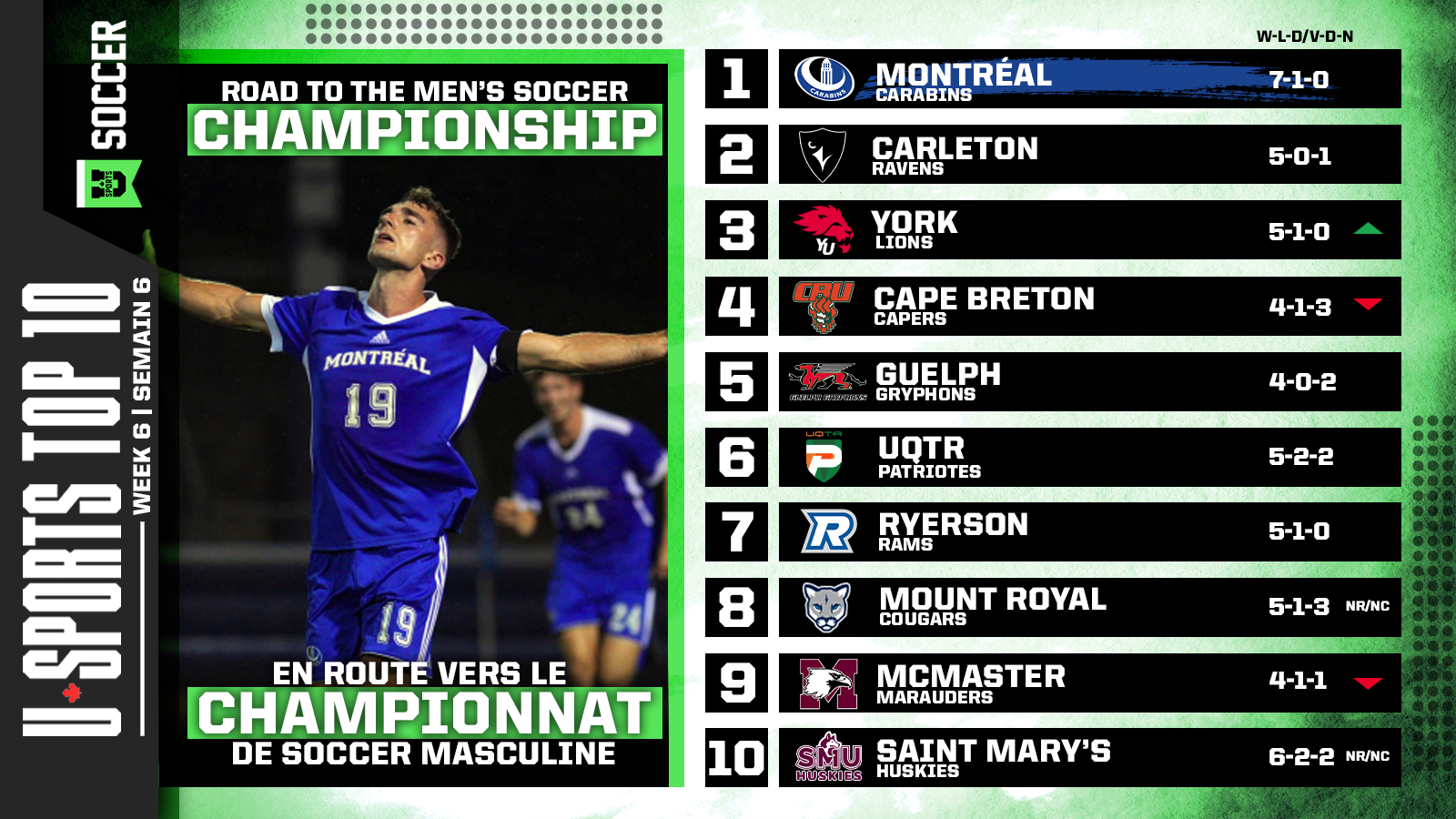 Finally, women’s field hockey saw no movement in the Top-5 as the defending U SPORTS champion Victoria Vikes (4-0-0) were idle. The Toronto Varsity Blues (6-0-1) stay at No.2 after wins over the Queen’s Gaels (0-6-0), remaining undefeated on the season. 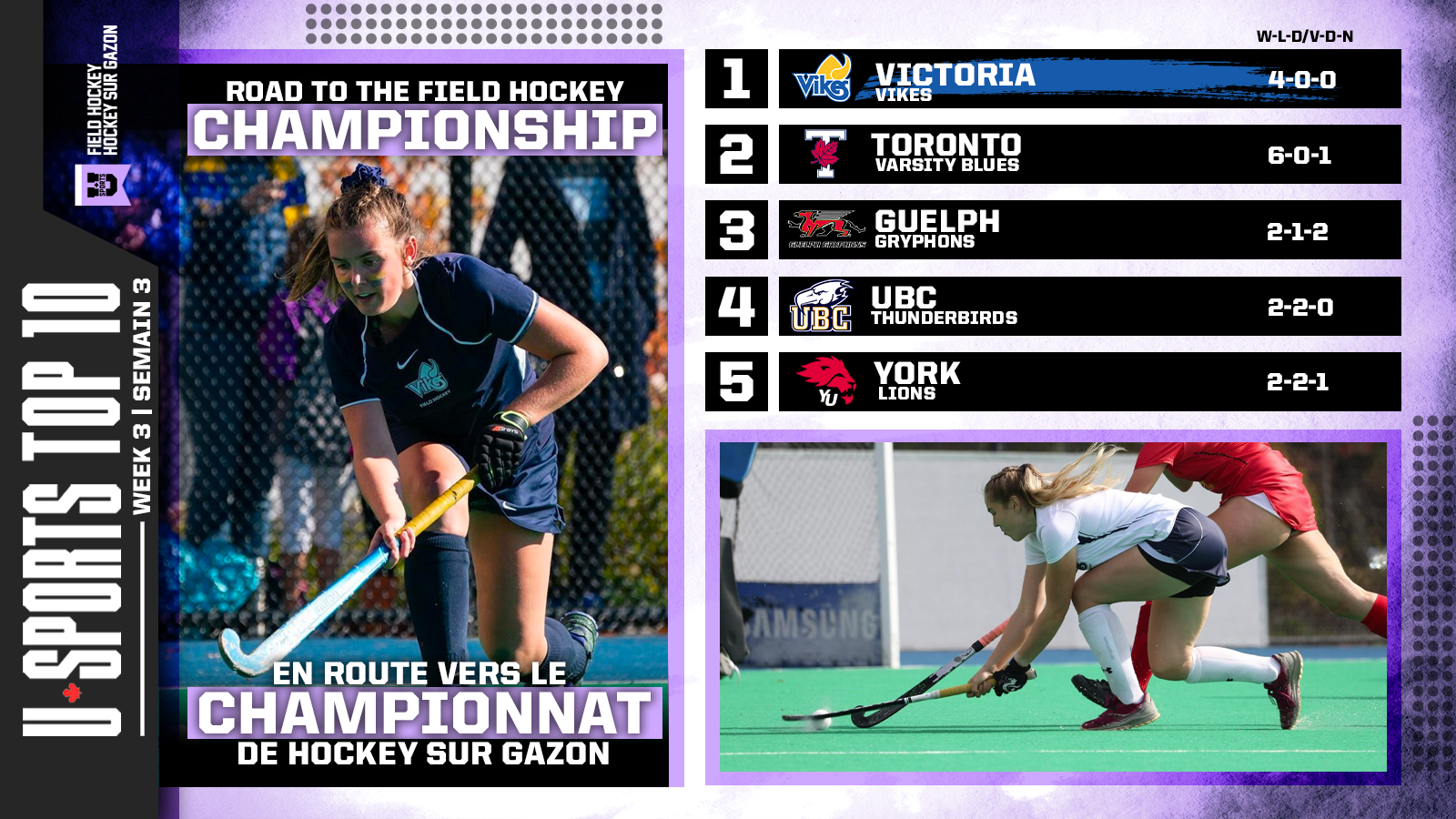