The UBC Thunderbirds are the team to beat in men’s swimming as their Canada West championship performance has propelled the squad to the top of U SPORTS rankings.

The UBC men captured their 8th consecutive Canada West banner on Sunday in Edmonton. The Thunderbirds continued their dominance of Canada West, finishing 175 points ahead of the Calgary Dinos.

Powering the T-Birds to victory was Blake Tierney, who finished with seven medals, including a new conference record, along with Dmitriy Lim's five medals, and rookie Tayden DePol's four, which also included a Canada West record. UBC's men also set a new conference mark in the men's 4x100m medley relay, as DePol, Justice Migneault, Keir Ogilvie, and Tierney topped the podium in a time of 3:33.39. 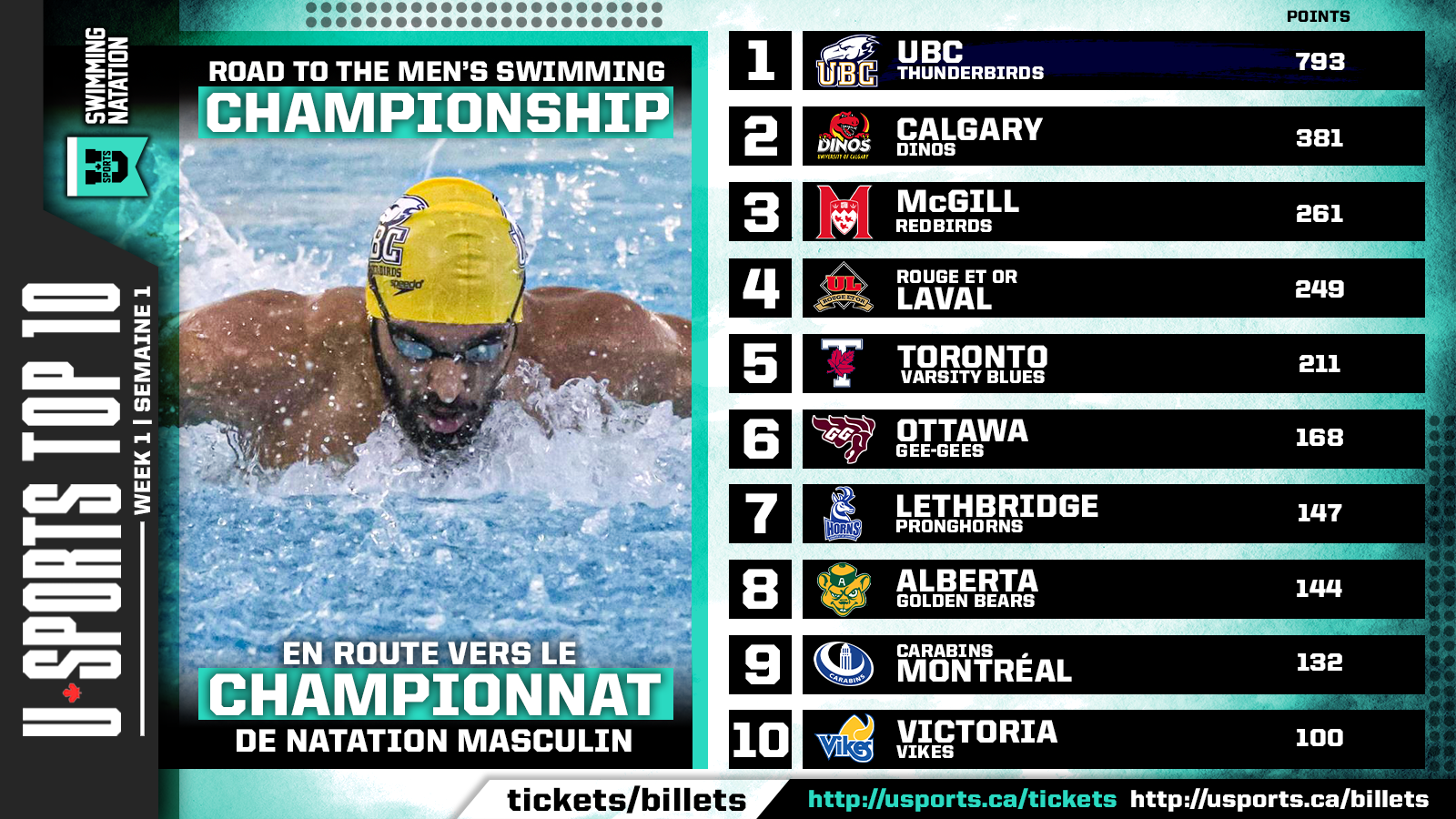 In the women’s pool, The Calgary Dinos swam to a conference banner of their own, for the first time since 2008.

Rebecca Smith managed a clean sweep of her individual events after decisively winning the women's 100m freestyle on the final night of the championships in a new CW record time of 53.10. Smith went four-for-four in gold medals and CW records over the weekend after winning the women's 50m and 100m butterfly as well as the 100m and 200m freestyle events, rewriting the Canada West record books in her conference championship debut.

Rookie Hannah Johnsen was another standout performer for the Dinos. The Thunderbay, Ont. native raced home for gold in the women's 100m backstroke beating out Manitoba's Dora Modrcin under the flags, touching with a new personal best time of 1:00.79. Johnsen nearly had a grand slam, winning gold in both the 100m and 200 backstroke events and narrowly missing out in the 50m, claiming silver on the opening night of the championships. 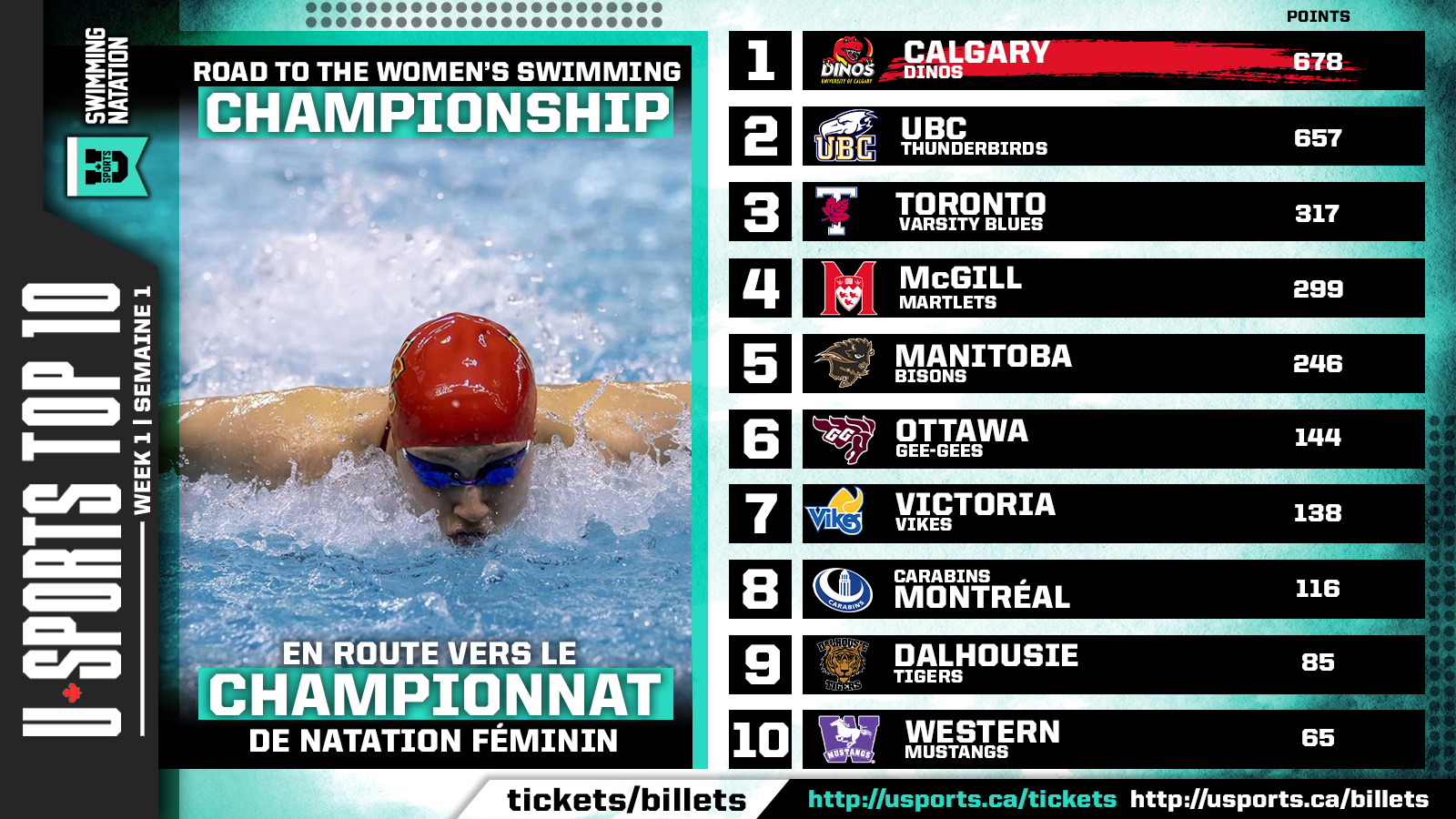 In women’s basketball, the Saskatchewan Huskies (6-0) are back in the top spot after usurping the No. 2 UPEI Panthers (9-0) to reclaim supremacy.

The No. 1 Huskies defeated the Regina Cougars (2-6) twice. Fifth-year guard Libby Epoch chipped in with a 16-point and 10-rebound double-double in the first tilt, while All-Canadian Summer Masikewich led the Huskies to their sixth win of the season with 18 points and nine rebounds in the second game. 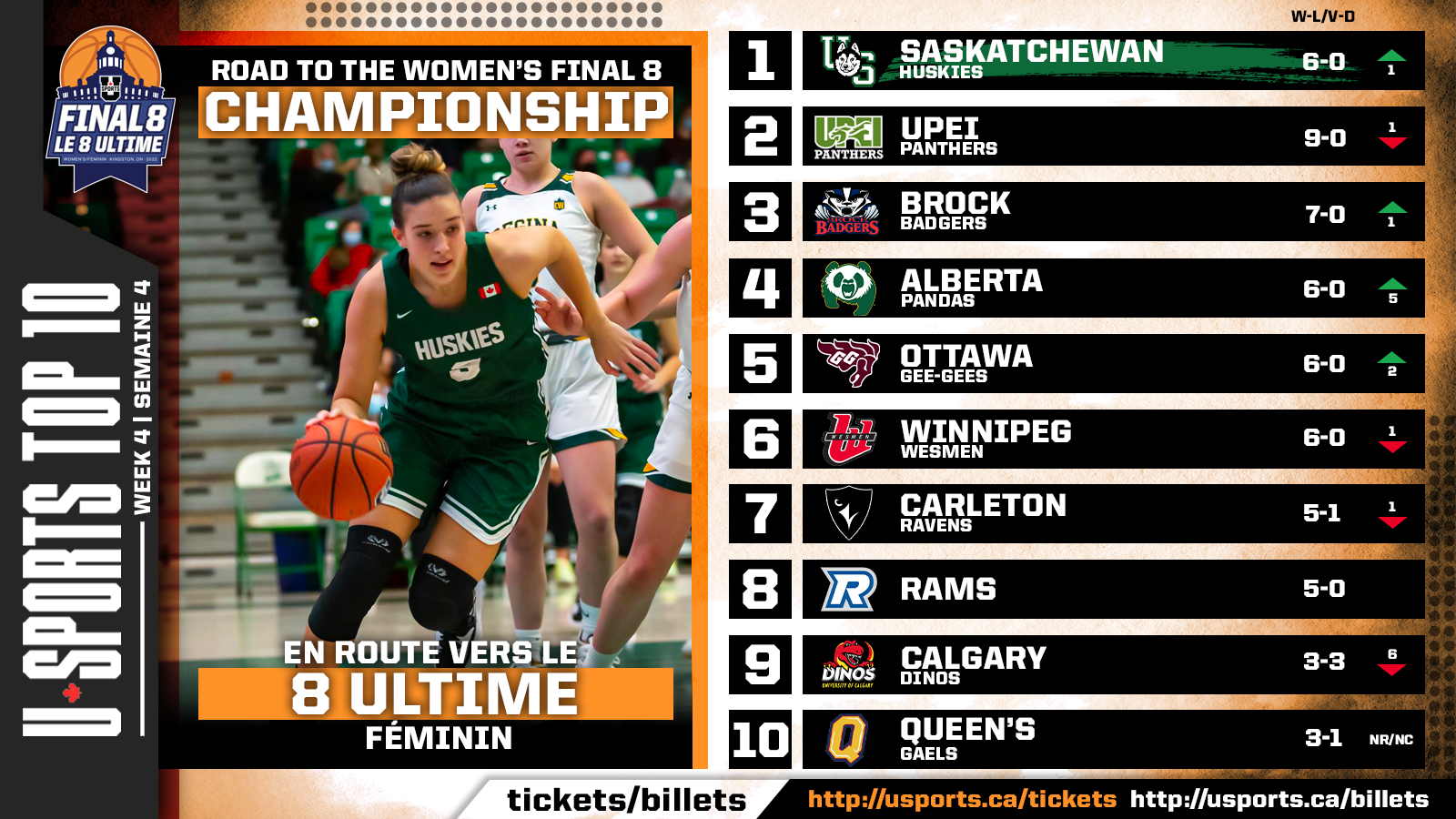 On the men’s court, No.1 Carleton Ravens (6-0) remain undefeated after dispatching the York Lions twice on the road. The Ravens are averaging 98.8 points per game while allowing only 57.2 points against on the season. 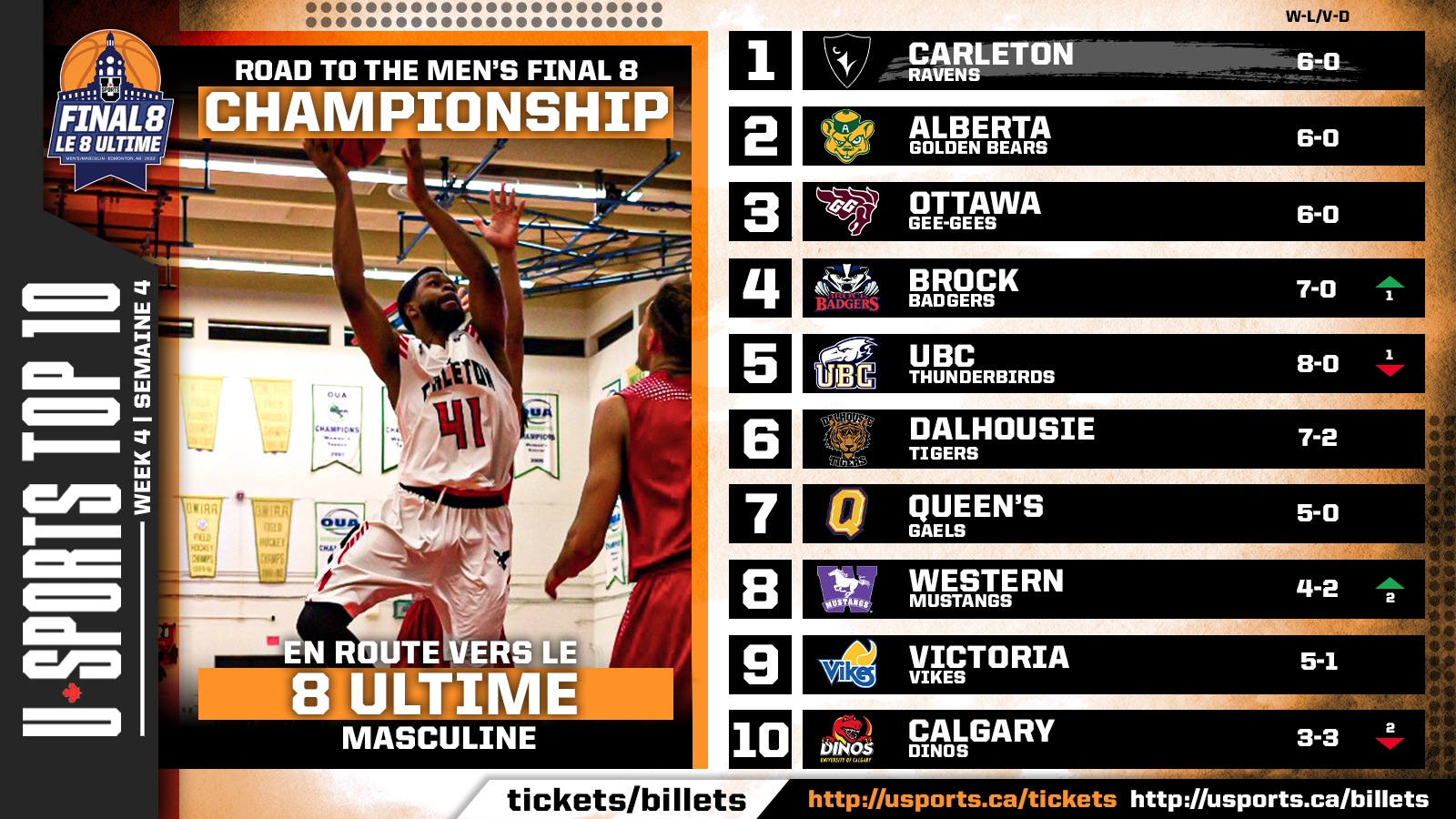 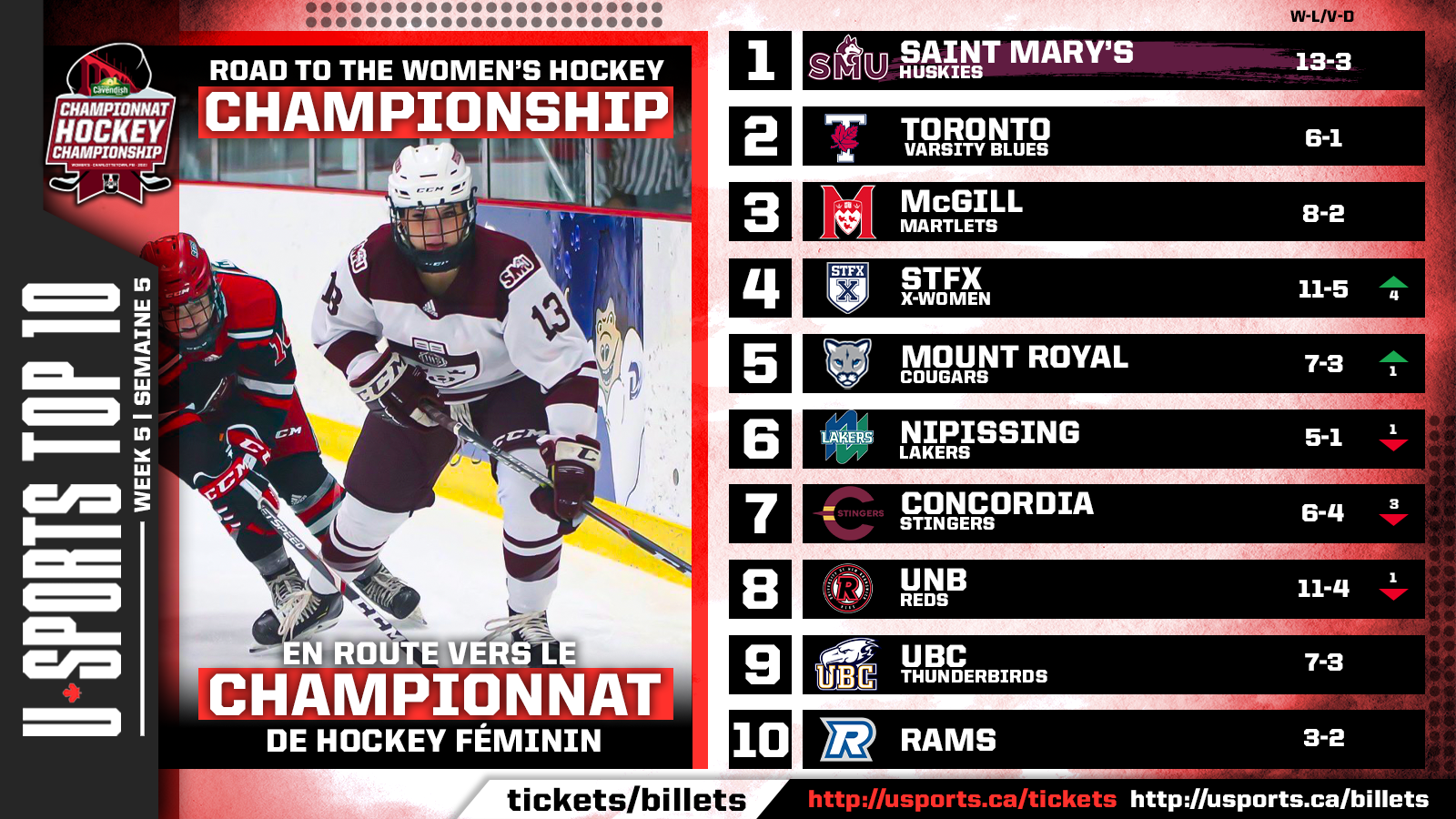 The Reds, led by head coach Gardiner MacDougall are currently on an eight-game win streak. 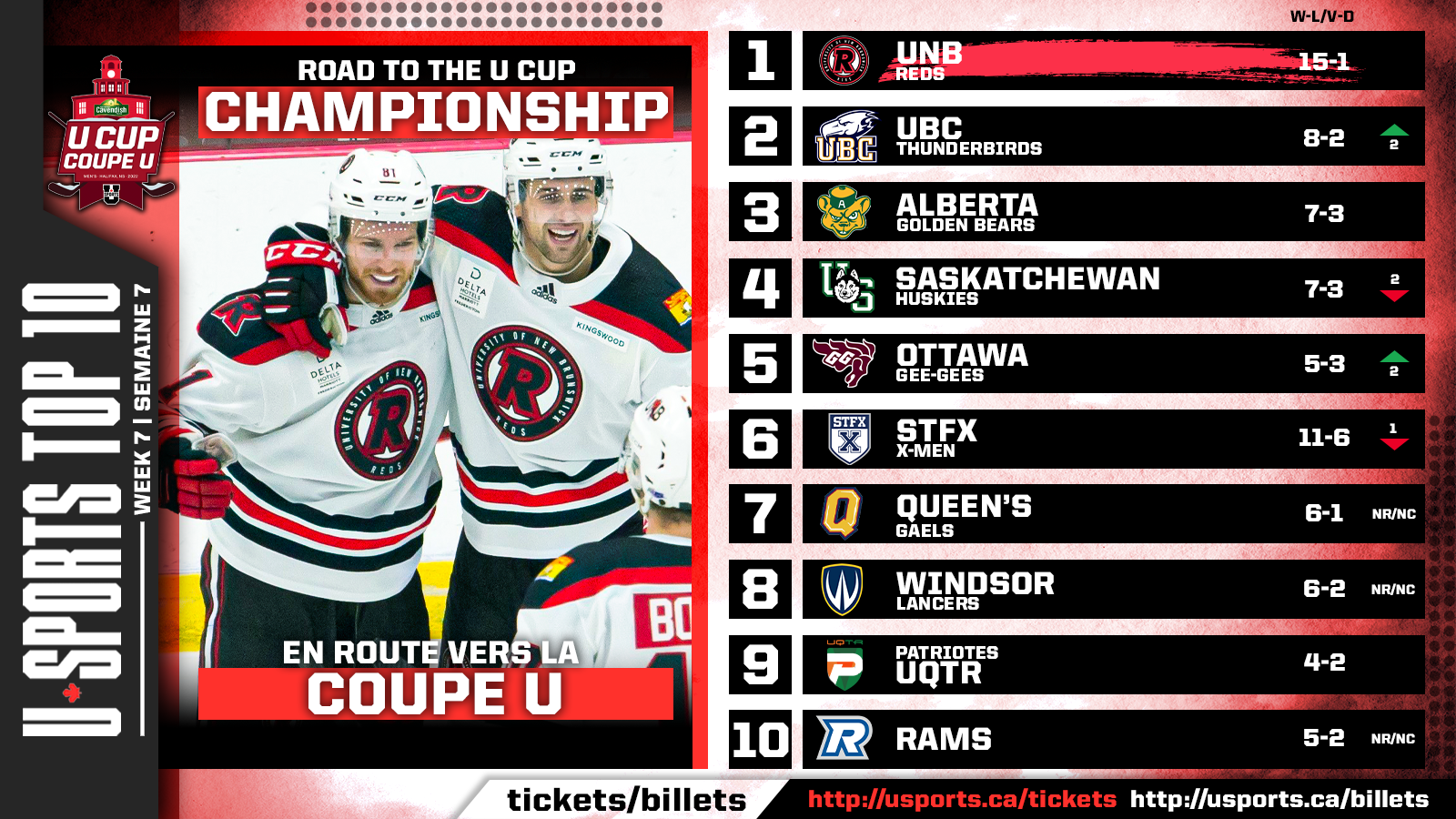 In women’s volleyball, the No. Alberta Pandas (6-0) remain the team to beat after making quick work of the Calgary Dinos (2-4) to sweep the weekend series. 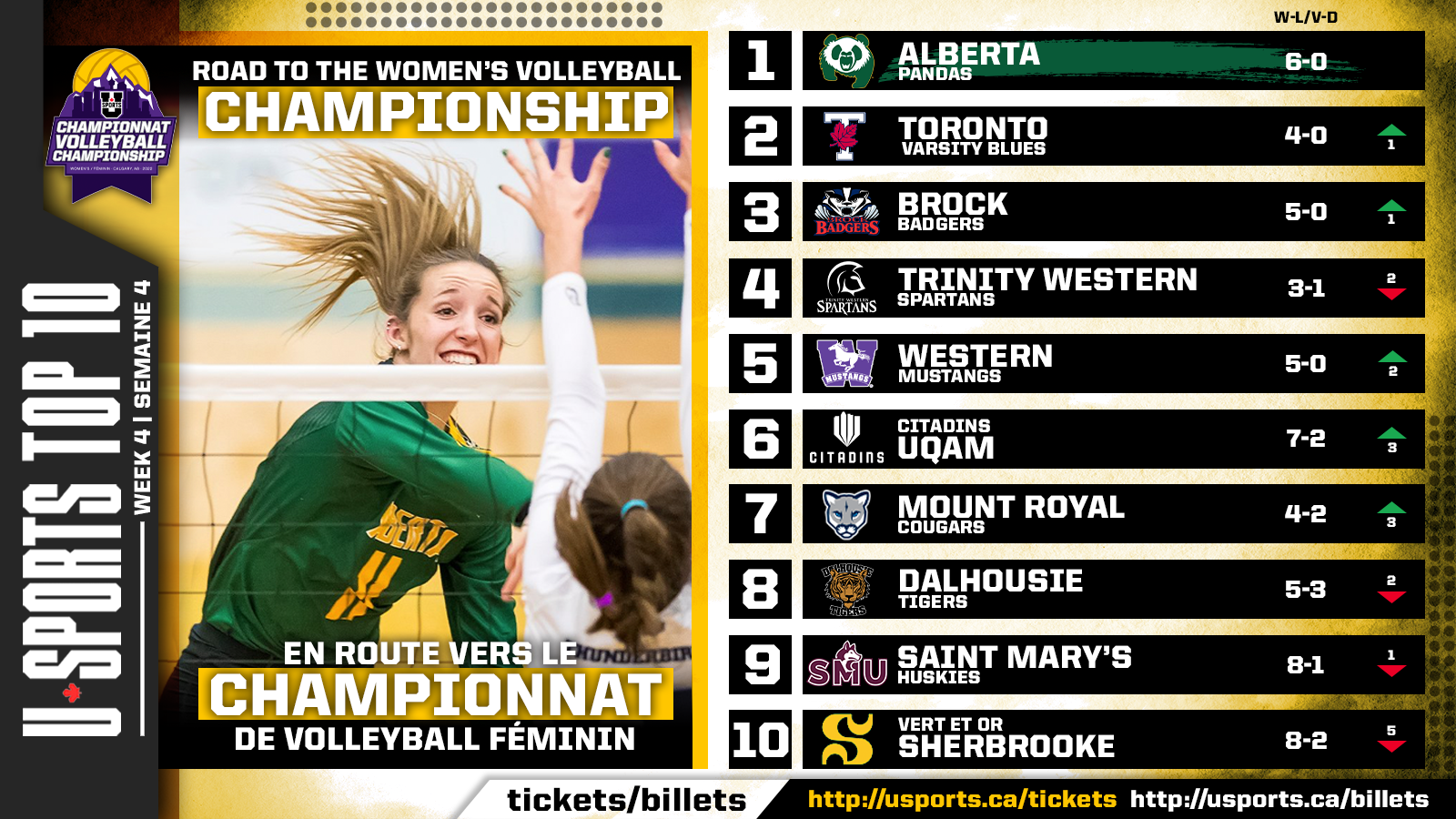 On the men’s court, the No. 1 Trinity Western Spartans (4-0) were back in conference action, sweeping the No.9 UBC Thunderbirds this past weekend in Langley, B.C.

The Spartans will have their eye on the coveted Tantramar Trophy and are the defending U SPORTS champions, dating back to the 2018-19 season. 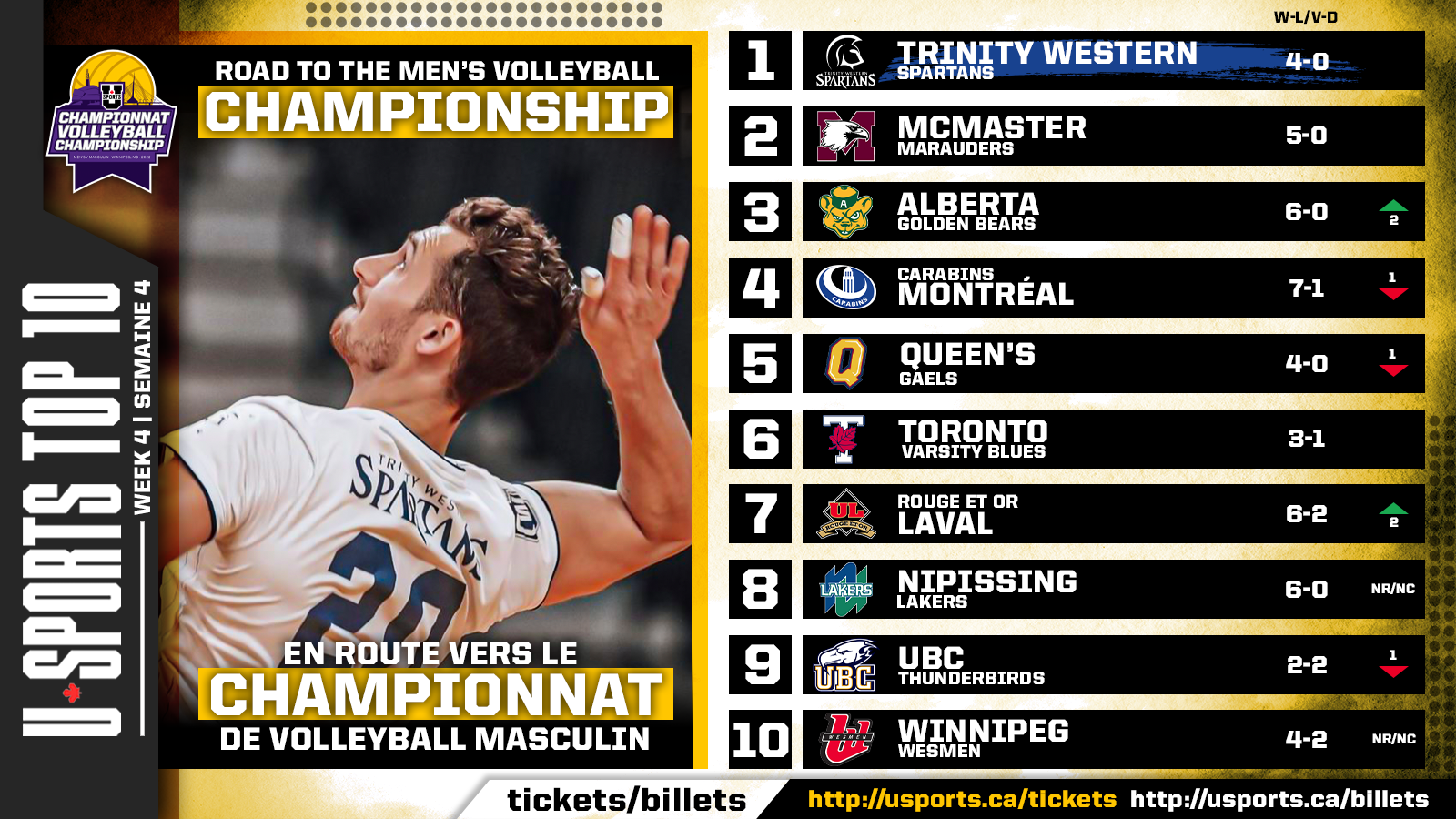 In men’s wrestling, the No. 1 Alberta Golden Bears remain the top seed as competition was idle. The Bears will have to be on full alert, as the No. 2 Saskatchewan Huskies feature a brotherly duo of Carson (83kg) and Hunter Lee (90kg) who top the nation’s individual rankings in their respective weight classes. 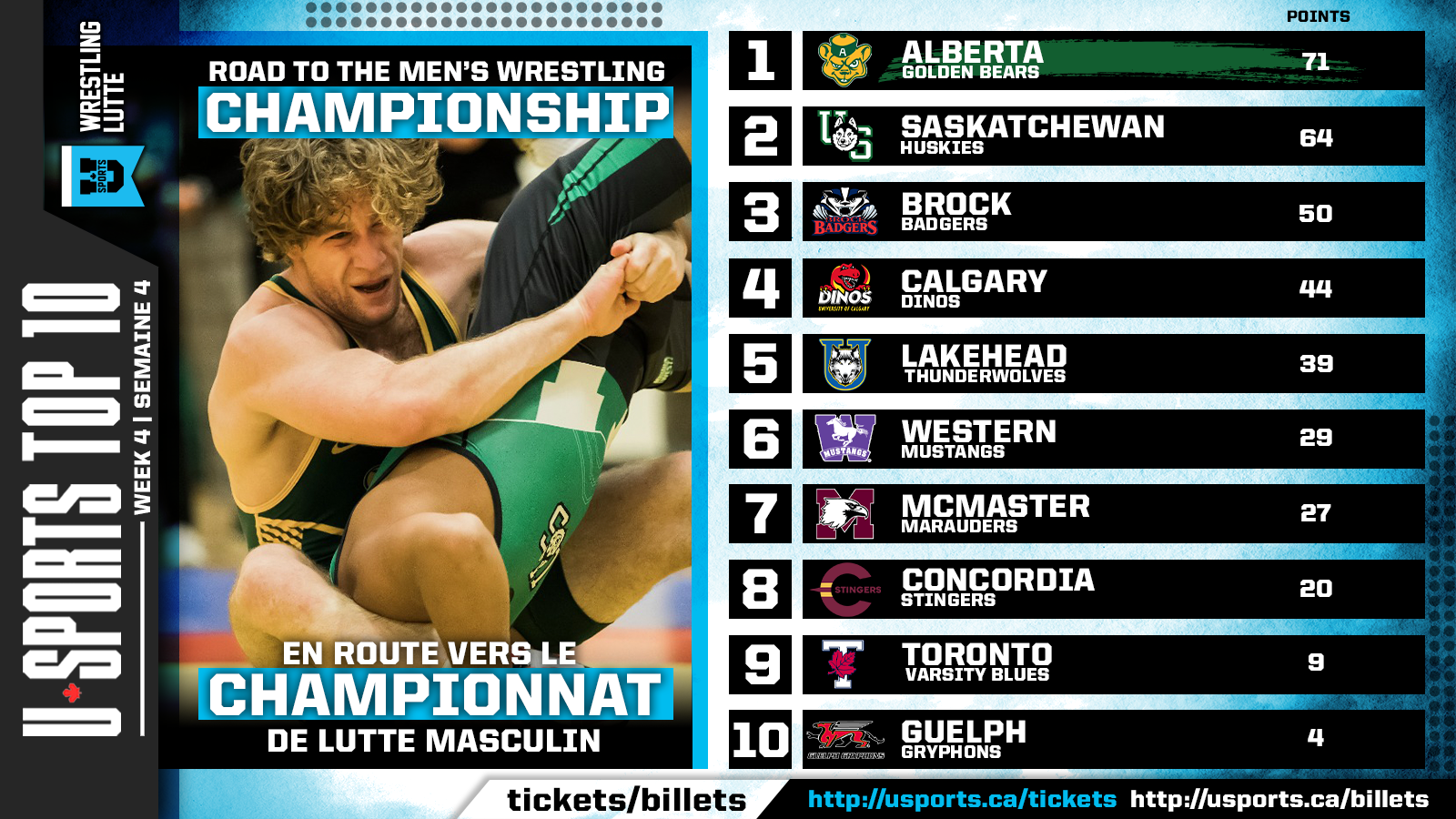 On the women’s side, the No. 1 Alberta Pandas are once again the top crew as competition was idle. Alberta’s Jayden Ramgotra is currently the nation’s top-ranked wrestler in the 82kg division. 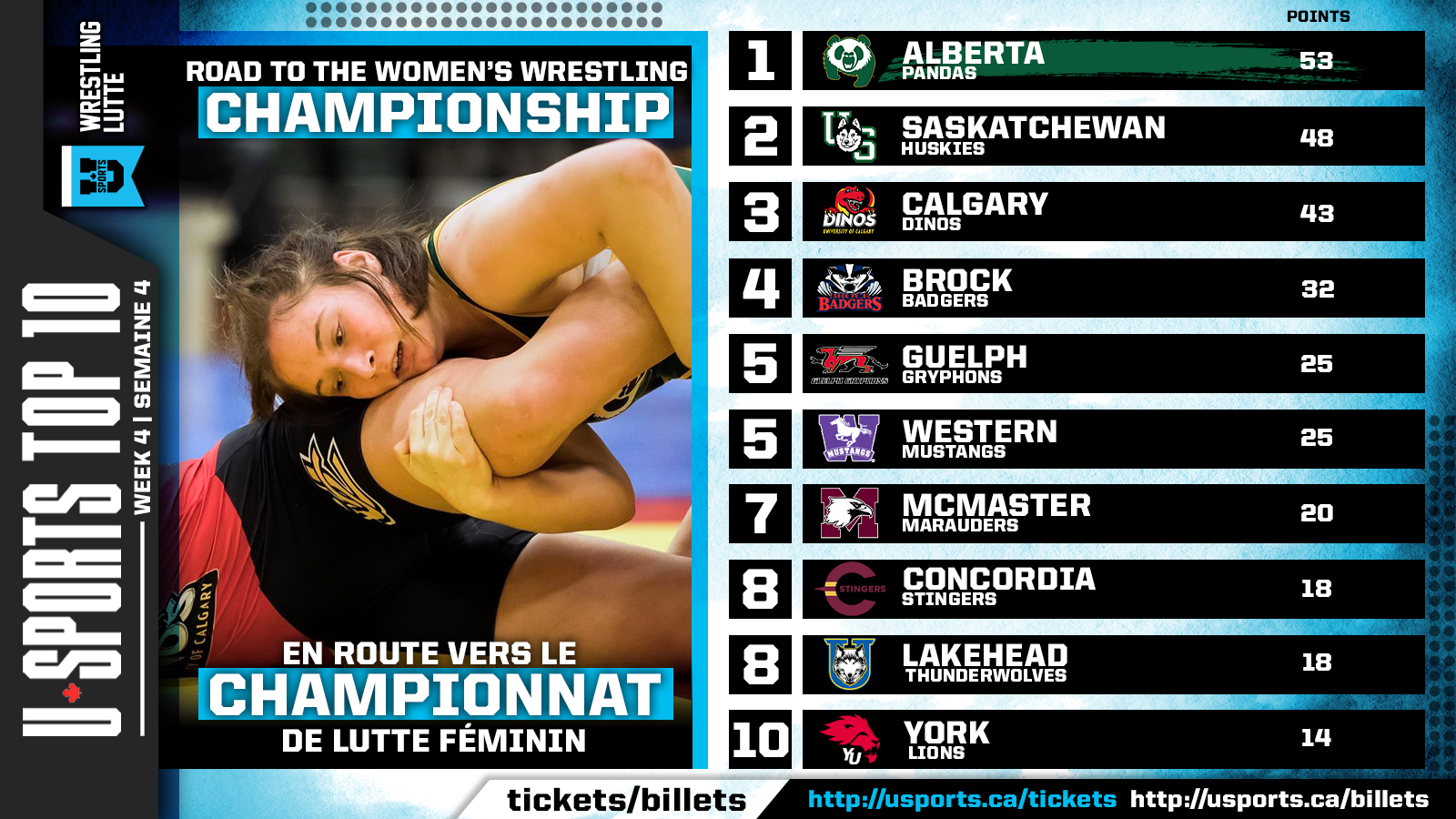