Sports in the Canada West Conference continue as Nolan Yaremko of the Mount Royal Cougars and Lilla Carpenter-Boesch of the Regina Cougars provided an offensive spark on the ice.

In curling, Alberta’s Gabe Dyck and Regina’s Krystal Englot led their teams to Canada West Banners On the volleyball court, Anton Napolitano of Thompson Rivers and Amanda Matsui of Fraser Valley were standouts, while UBCO’s Kevin Hamlet and Victoria’s Ashlyn Day came up clutch on the basketball court.

Due to the COVID-related restrictions across Canada, U SPORTS is spotlighting the Canada West athletes that would have otherwise been in the running for the U SPORTS Athlete of the Week for the period ending February 6, 2022. 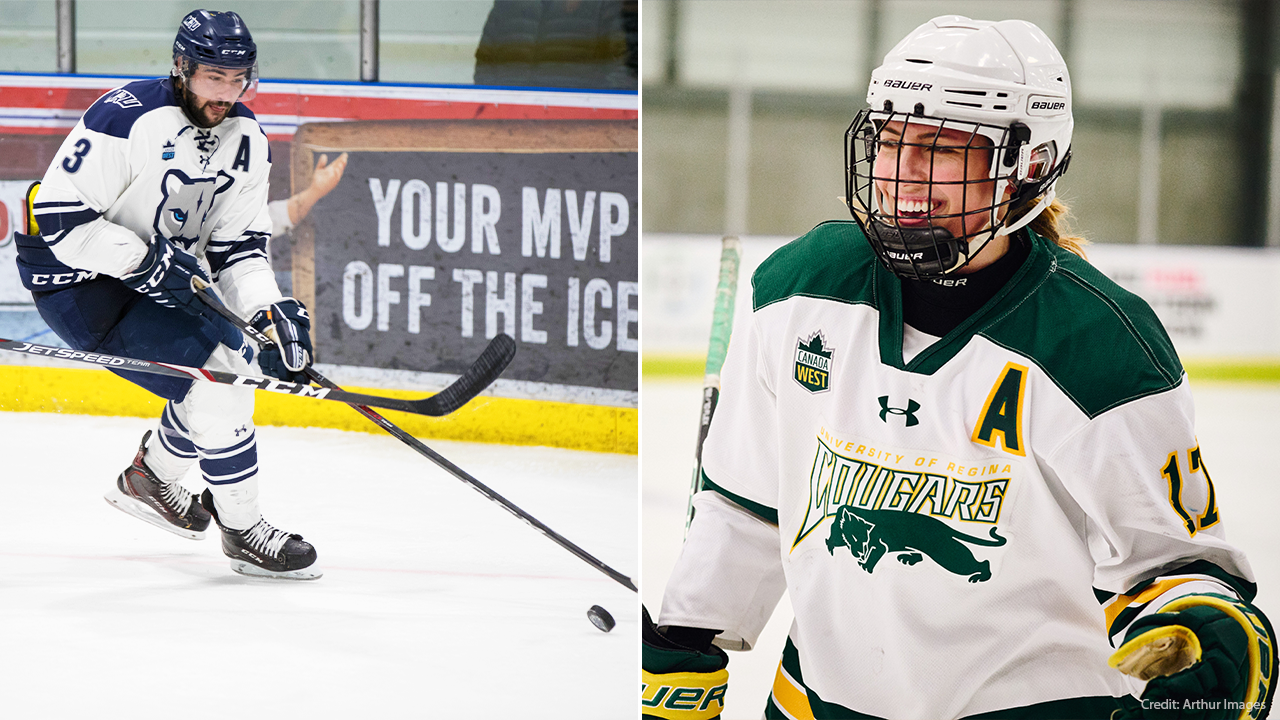 Nolan Yaremko set the tone in an important series for the Cougars as they went into the weekend trailing the top-ranked UBC Thunderbirds by four points in the standings. Yaremko opened the scoring Friday as he battled in front of the net to bury the puck on his second try.

It took the sophomore mere moments to score again, as he roofed a feed from linemate Riley Sawchuk to put the Cougars in the driver's seat, and they never looked back.

Yaremko completed his hat trick in the second period en route to a 6-2 victory over the towering T-Birds.

The Spirit River, AB product then added his fourth of the weekend the following day in a 5-3 win.

Yaremko is the top goal-scorer in Canada West and U SPORTS this season, with 19 now under his belt. He and teammate Sawchuk co-lead U SPORTS in points with 34.

The convincing weekend sweep propelled MRU up to second in Canada West, now tied in points with the UBC.

Regina went into the weekend 5-9-2, looking at a familiar story in the first period Friday, down 2-0 to the then 11-5 Manitoba Bisons.

That's when Lilla Carpenter-Boesch gave her team a shot of hope they would ride for the rest of the weekend. The fifth-year forward picked up the puck outside the zone, beat one defender, and split the next two with lightning-fast wrister over the goaltender's glove.

That began the offensive onslaught for the Cougars. Carpenter-Boesch netted another one as Regina scored five unanswered to take their first upset of the weekend.

Carpenter-Boesch led another comeback the next day as well. Down again, 2-0, the Gray, SK product shot down the left side on an odd-man break, burying the rebound off teammate Heather Fiske's shot. In the next period, she wound her way into the zone, displaying excellent puck control, before putting another past Bisons goaltender Kimberley Davidson.

Her fourth of the weekend poised the Cougars for a second victory, which they took with a Jordan Kulbida game-winning goal in the third. 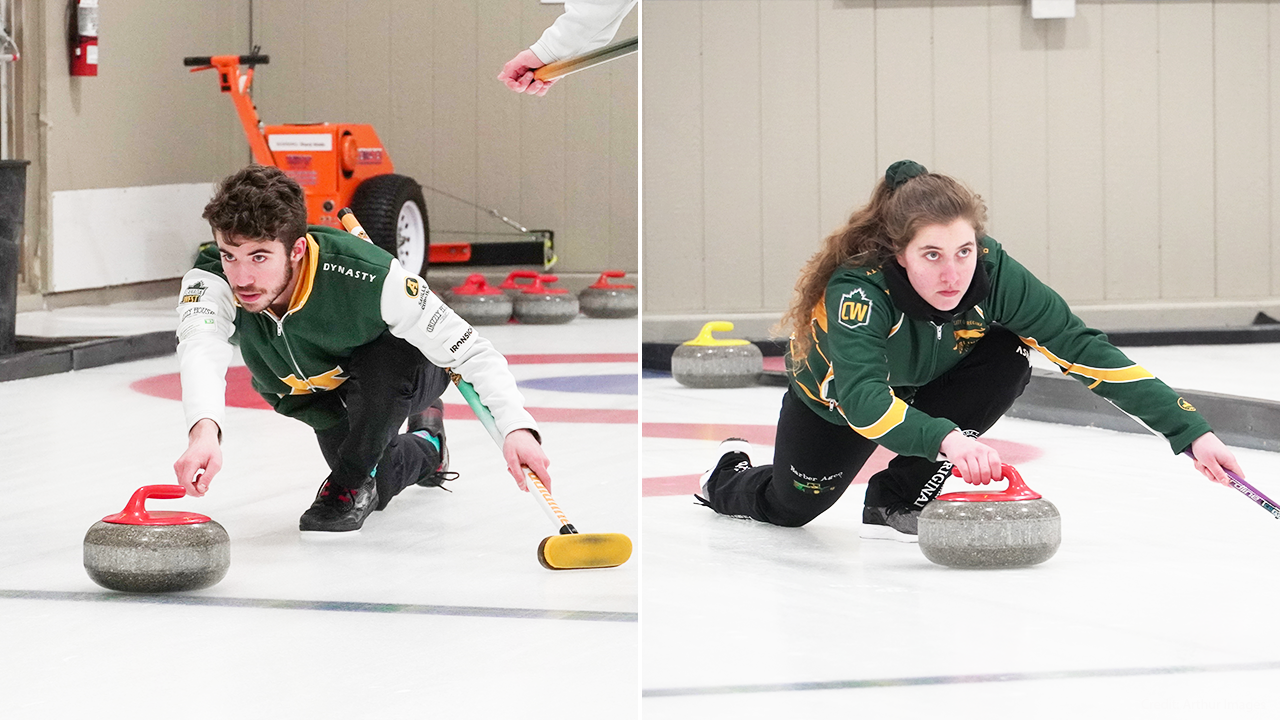 Gabe Dyck was a new face this year in the accomplished Golden Bears program, but he seemed to understand the gravity of Alberta's goal: bring home a third-straight Canada West banner.

The first-year lead was excellent in the Golden Bears' perfect tournament, making 80.3 percent of his shots and earning a plus (5 percent or better than his opponent) in three of the team's four games.

He helped his team outscore competitors 35-17 over championship weekend, as the Bears dominated the field to capture the rare CW three-peat, all accomplished without a single loss.

On the women’s side of the draw, Regina's skip Krystal Englot and the Cougars had their sights set on taking down defending champs, the University of Alberta Pandas.

Englot brought a renewed spirit into the event, one that inspired her teammates to follow in her confident steps. She came up big in tense moments, showing her fearlessness from the hack. Englot made several key shots in two games against the Pandas, both of which went down to the final rock.

In the second game, the fourth-year skip finessed a draw tap back that couldn't be removed to give her Cougars an extra end victory. 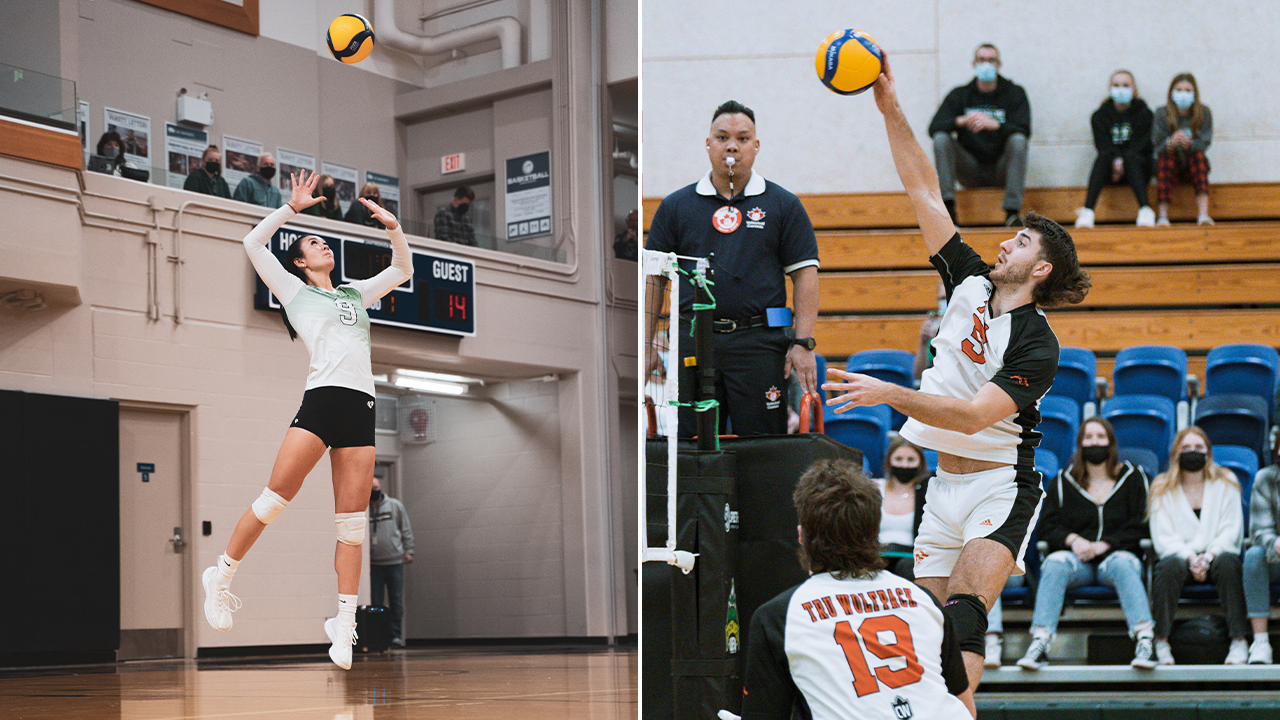 The fifth-year setter did it all, tucking away six kills, notching 17 assists, blocking four hits, and putting up 11 digs Friday night in a 3-0 sweep of the Cascades.

He showed up big in crunch time, posting clutch back-to-back kills in the first set to put his team up 21-18 before they cruised to victory.

The Melbourne, AUS product sailed in three service aces the next night, posting another 5 kills, 18 assists and 11 digs in a 3-2 win.

He didn't tire in the WolfPack's third straight match of the weekend, adding another three blocks, two aces, 16 assists, 11 digs and four kills as TRU swept the Cascades on the road.

In what was an exciting (and long-awaited) home debut for the Fraser Valley Cascades, Matsui seized the spotlight. The fourth-year outside hitter tucked away 13 kills in Friday's match with the Thompson Rivers WolfPack. She also hit the deck for 7 digs, putting up 14 points in the team's first-ever win on home court.

Matsui doubled production on the next night, posting a dominant 26 kills to the elation of the hometown crowd. Showing grit and determination in the third set, Matsui buried a gutsy swing from the right side to clinch the set 25-23.

To sweeten the deal, Matsui worked with efficiency Saturday night, posting a hitting percentage of .396. The Port Coquitlam, BC product also counted 11 digs and 28 points in the match.

The two wins bring the Cascades back to .500 on the season. 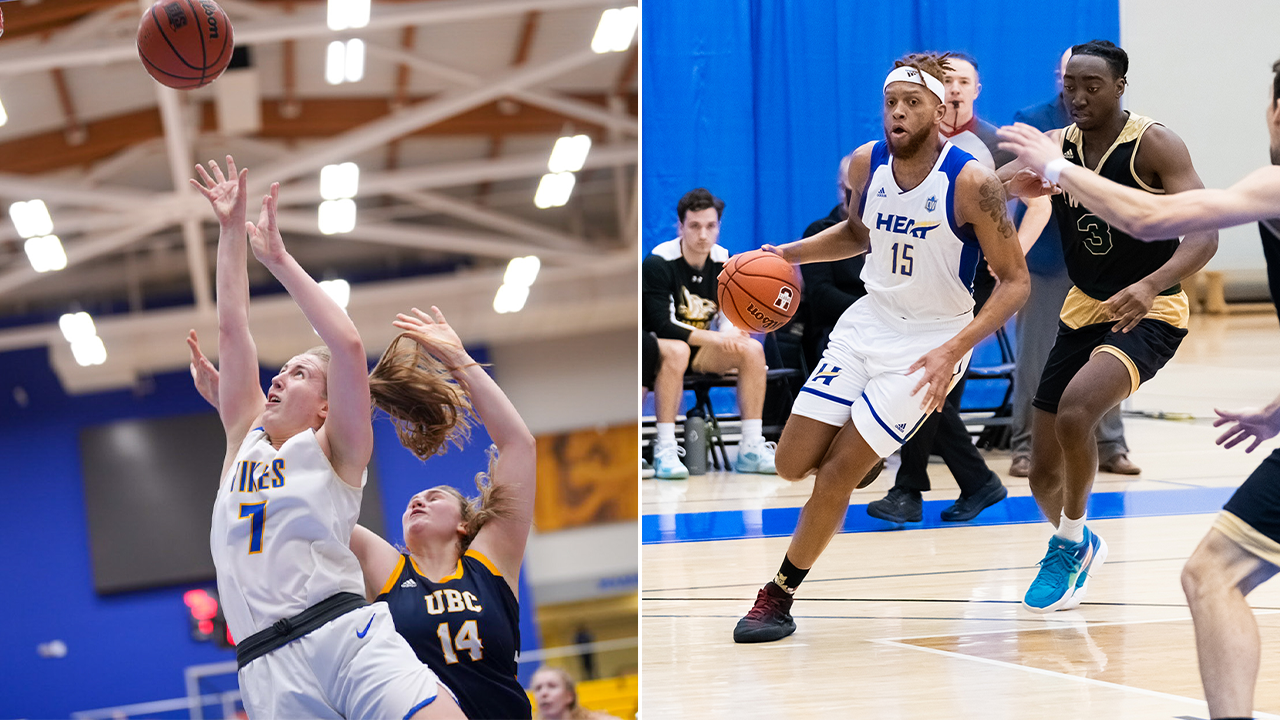 UBCO's Kevin Hamlet hit the court this weekend with a mission. The Scarborough, Ont. product sunk 14 points in the first quarter of the team's match-up with higher-ranked Fraser Valley.

After UFV battled back to make it a game in the second half, Hamlet simply put his head down and went back to work. The versatile forward hit a series of key three-pointers in the third quarter, helping the then 1-11 Heat edge out the 8-4 Cascades for their second win of the season.

Hamlet also grabbed seven rebounds and doled out seven assists before walking off the hardcourt with the win.

He showed another strong performance Sunday, posting 22 points, nine rebounds, two assists and a steal, but it wasn't enough for the Heat to pull off another upset. They fell to UFV by a score of 97-79.

Victoria’s Ashlyn Day wrote her name in the CW record books Friday, putting up a 42-point performance, tying for the seventh-best single-game tally in Canada West history. The Kelowna, B.C. product was responsible for over 62 percent of her team's buckets and finished 13 points short of outscoring the opposing UBC Thunderbirds by herself.

The 42 single-game points also sit as the mark to beat in U SPORTS this season.

Day nearly sweetened the accomplishment with a double-double, finishing with just shy of 10 rebounds. The fourth-guard also had four steals and an assist, carrying her team to a 67-54 victory over the 'Birds, a team that was nipping at Victoria's heels in the standings.

She followed up her historic night with 22 points, five rebounds, three assists and two steals in an 82-69 win Saturday, leading the Vikes to a weekend sweep.

Day now leads Canada West in points per game with 20.

The two wins extend Victoria's streak to six games after they started the season 2-4. They now sit in third in the Western division at 8-4.