U SPORTS, the national governing body of university sport in Canada, is pleased to introduce Pierre Arsenault as its new Chief Executive Officer beginning in June 2022. Mr. Arsenault will take over from Interim CEO Dick White, who retires officially on June 3.

“We are extremely pleased that a leader such as Pierre has emerged from the pool of talented candidates who applied for the position," said Dr. Joanne MacLean, Chair of the U SPORTS Board of Directors. "Pierre is a consensus builder and is well versed in our ecosystem. We are confident that he will immediately impact our organization and help us build on our solid foundation.” 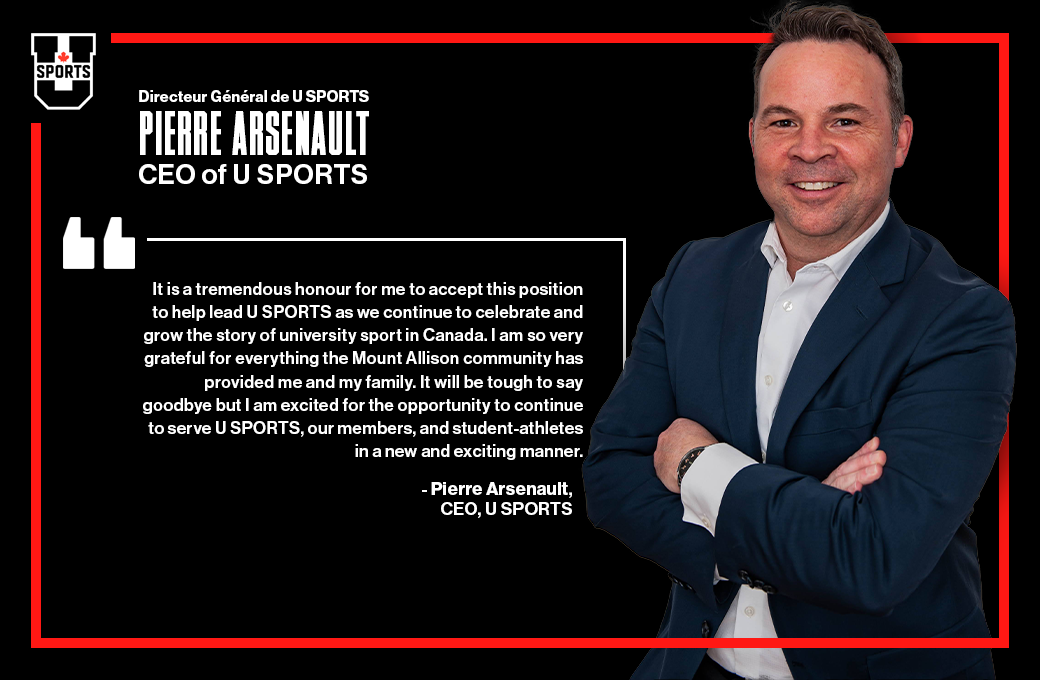 “It is a tremendous honour for me to accept this position to help lead U SPORTS as we continue to celebrate and grow the story of university sport in Canada," said Mr. Arsenault. "I am so very grateful for everything the Mount Allison community has provided me and my family. It will be tough to say goodbye, but I am excited for the opportunity to continue to serve U SPORTS, our members, and student-athletes in a new and exciting manner.”

Although his official appointment begins on June 6, he will soon begin transitioning with outgoing Interim CEO Dick White.

“We would like to thank Dick for agreeing to come out of retirement to provide tremendous leadership over the past two years. He has guided our organization through challenging times, and he leaves U SPORTS in a much better situation than he inherited," added Dr. MacLean.

Arsenault's last day as Mount Allison University's Director of Athletics and Recreation will be June 2. Pierre will maintain his residence in Sackville, NB, where he has lived with his wife Karen and children Jack, Jamie, and Ben for 12 years, but he will regularly commute to the national office in the Toronto area.