The No. 1 Toronto Varsity Blues (15-2) remains the top seed in the nation as the women’s hockey playoffs ensue across all four conferences.

Toronto blanked the Queen’s Gaels (4-9) 2-0 to advance to the OUA semifinal on Saturday. Maintaining her incredible form from the regular season, Erica Fryer turned aside 16 shots in the shutout. 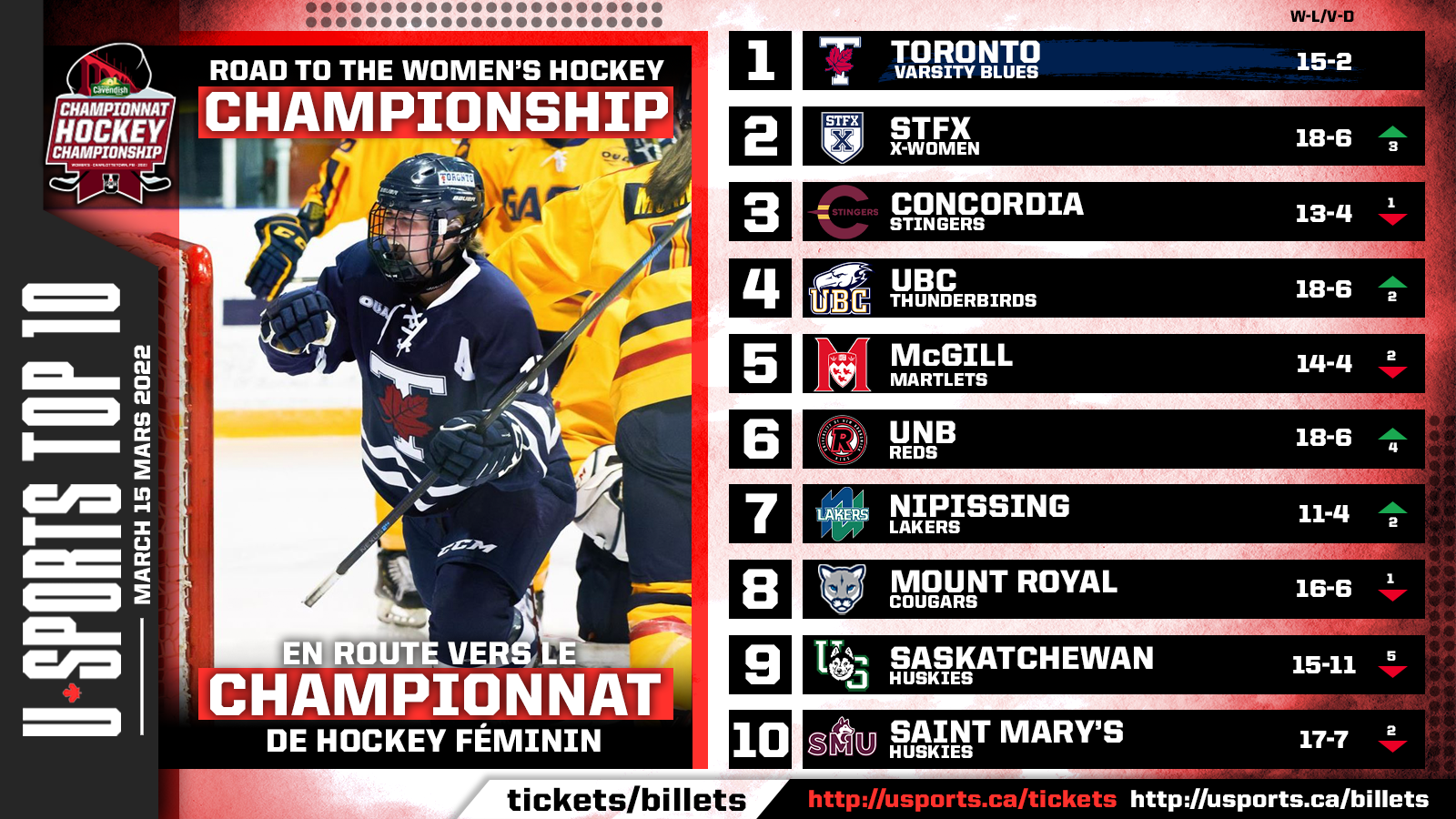 In men’s hockey, the No. 1 UNB Reds (21-3) are still the team to beat heading into the AUS playoffs with a first-round bye. UNB goaltender Rylan Parenteau holds a 14-1-0 record and holds a 1.31 goals-against average—best in the nation. Parenteau’s .938 save percentage ranks second in U SPORTS. 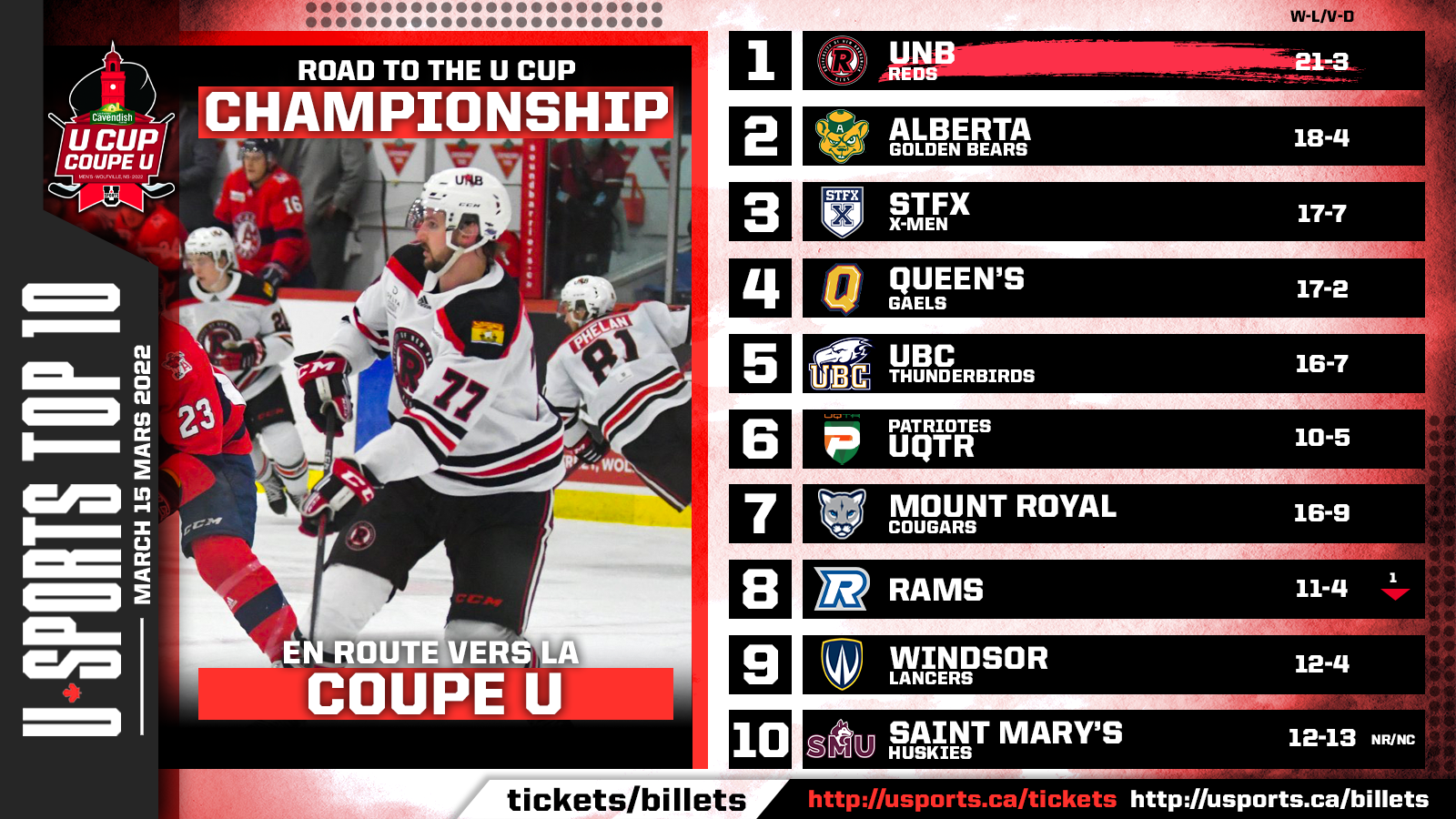 In women’s basketball, the No. 1 Brock Badgers are the top-ranked squad heading into the OUA playoffs. Standout forward Samantha Keltos leads the Badgers, averaging 16.2 points per game while shooting threes at a 41.1 percent clip. Keltos also leads Brock in rebounds with 9.3 boards per game.

In Canada West action, the defending U SPORTS national champion No. 2 Saskatchewan Huskies (15-2) look poised to make another run for national gold. The Huskies are in the Canada West Final Four, where they’ll take on the Lethbridge Pronghorns (12-6) in the semis for the chance to play the winner between the Regina Cougars (10-8) and No. 3 Winnipeg Wesmen (16-2) for a conference banner. 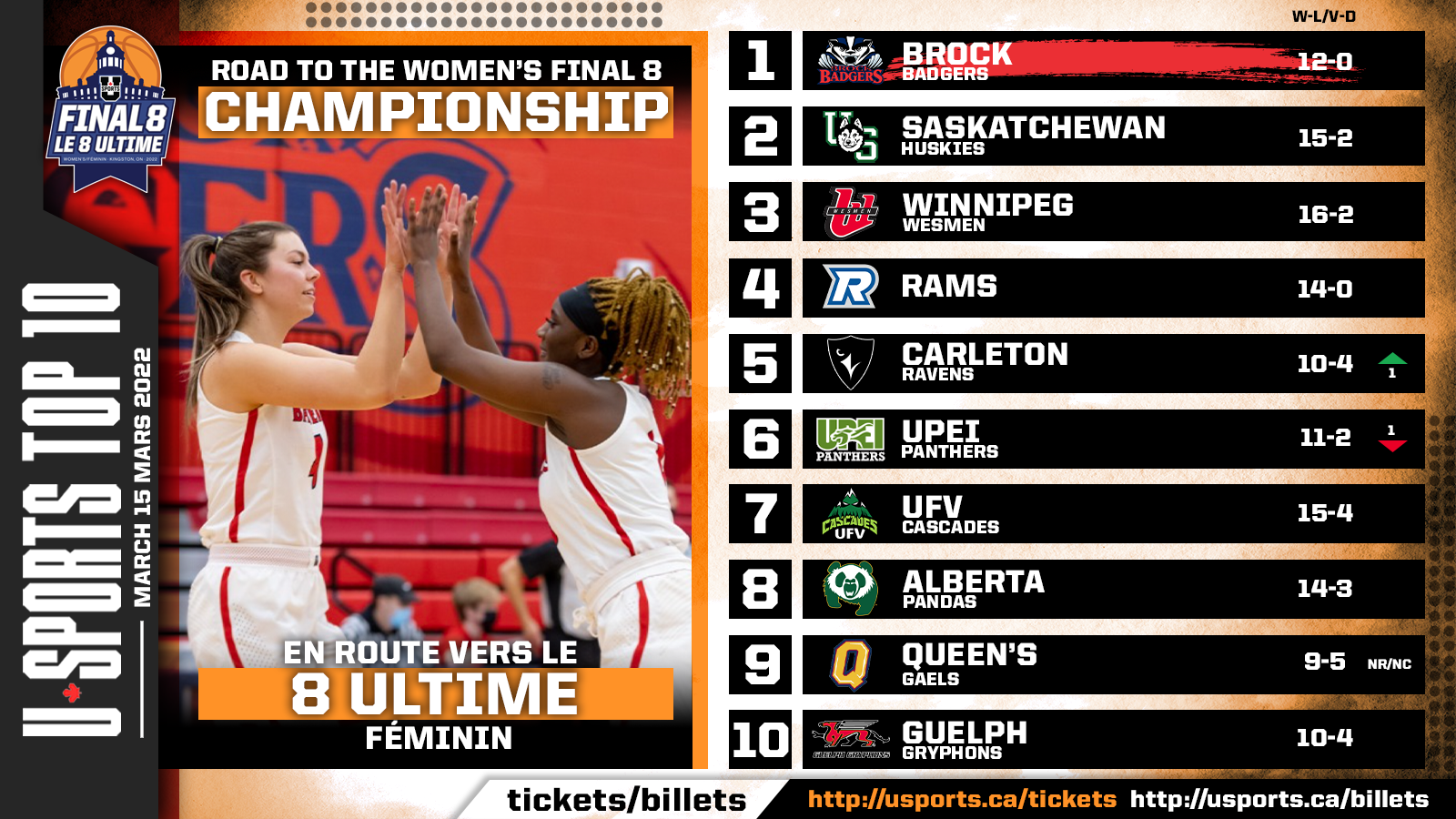 In men’s basketball, the perennial powerhouse Carleton Ravens (14-0) remains the No. 1 seed heading into the OUA playoffs. Forward Lloyd Pandi has led the way for the Ravens, averaging 14.7 points per game, while grabbing 8.1 rebounds and dishing 3.1 assists per contest.

In the RSEQ conference, the No. 10 McGill Redbirds (12-0) cracked the rankings after cruising through the regular season undefeated thus far. 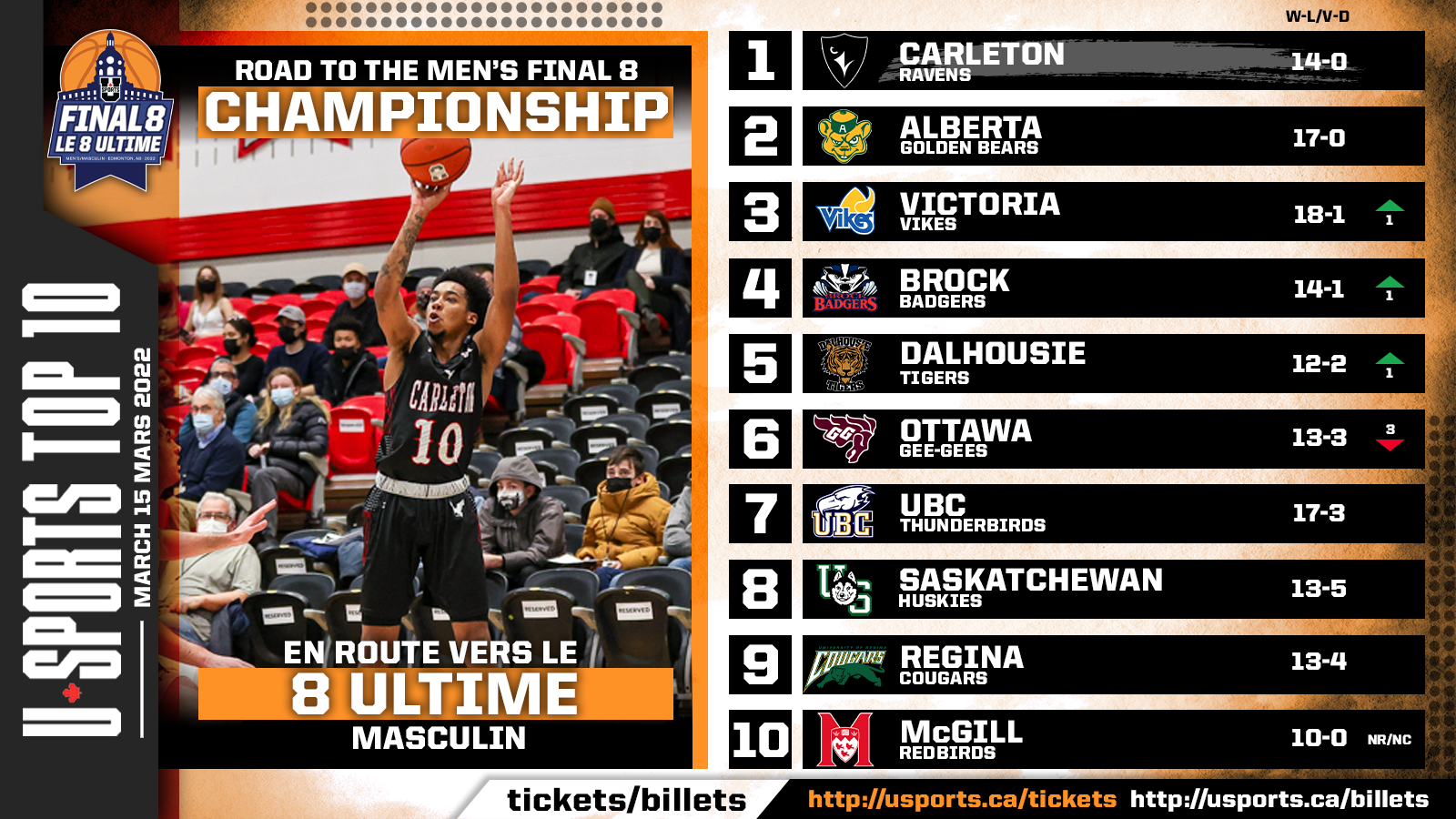 In women’s volleyball, the No.1 Trinity Western Spartans are once again the top-ranked squad after cementing their place in the Canada West Final Four despite dropping a five-set thriller to the No.4 Alberta Pandas.

As the runner-up in their pool, the Spartans will face the No.7 UBC Thunderbirds (14-7) in the semifinals. The Pandas will take on the No. 5 Mount Royal Cougars (18-5) for a chance to play in for Canada West gold. 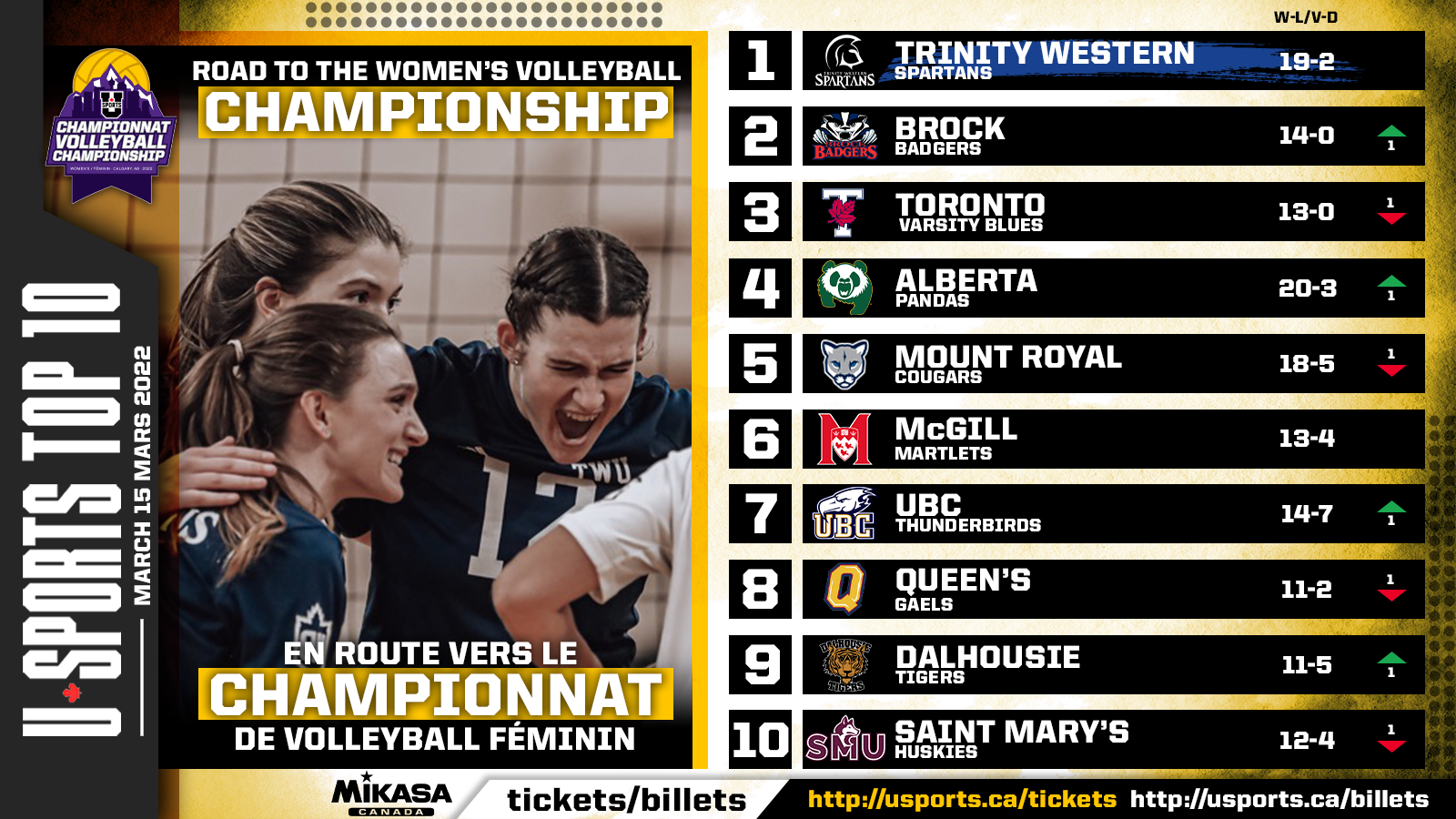 In men’s volleyball, the No. 1 Trinity Western Spartans (20-1) went undefeated in their pool to secure a spot in the Final Four. The Spartans will do battle with the No. 9 Brandon Bobcats (12-11) in the semifinals, while the No. 3 Alberta Golden Bears (20-3) will face the No. 8 Calgary Dinos (16-7) in hopes of advancing to the finals. 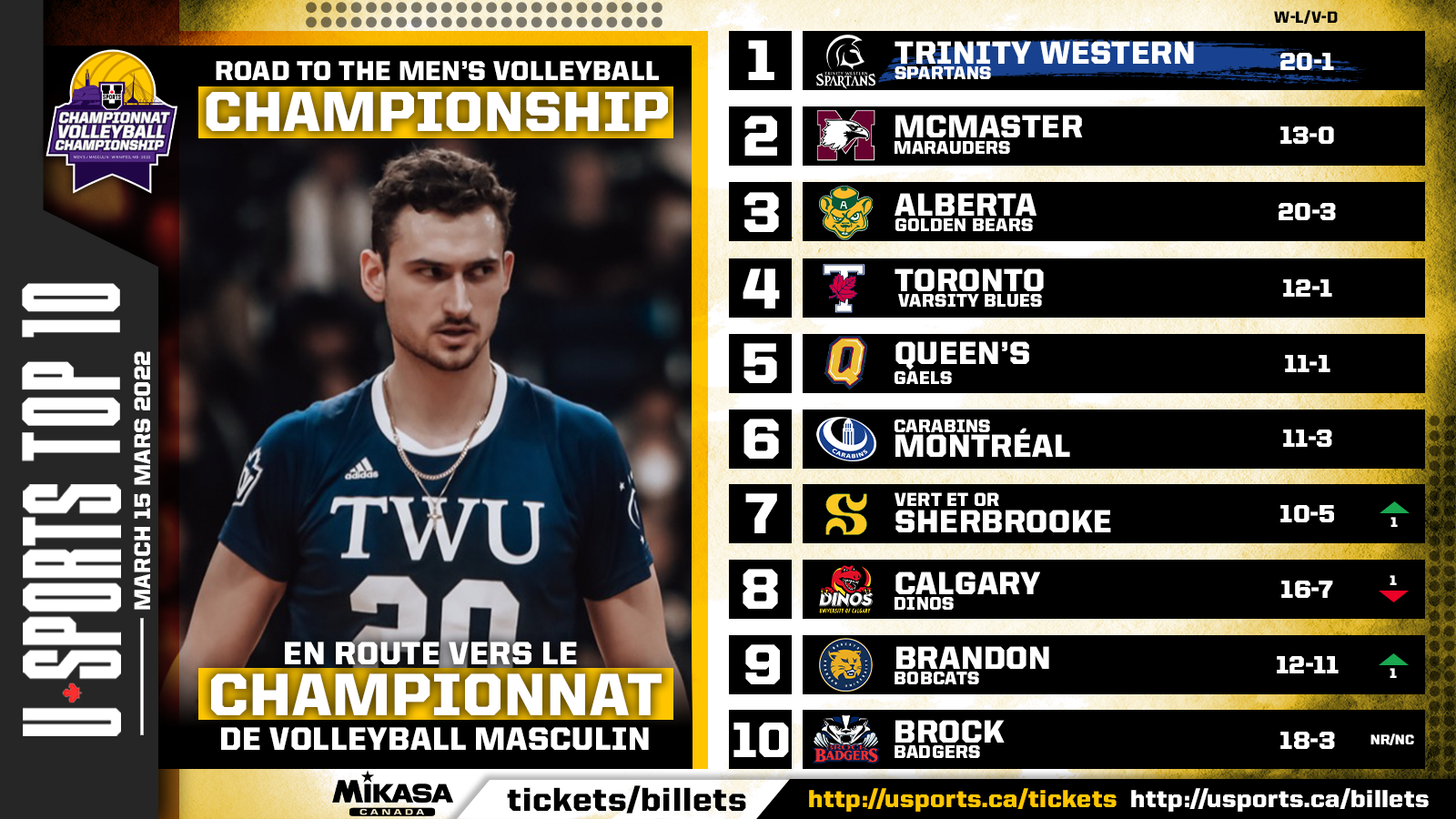 In men’s swimming, the No. 1 UBC Thunderbirds are at the top of the rankings once again.

The Toronto Varsity Blues jumped up to the No. 2 spot after an excellent showing at the OUA Swimming Championships. U of T’s Jacob Gallant made a splash for the Blues, swimming to four medals in the meet, including a gold-medal time in the 400m individual medley, setting an OUA record with a time of 4:13.74 to help Toronto to their 18th straight OUA title. 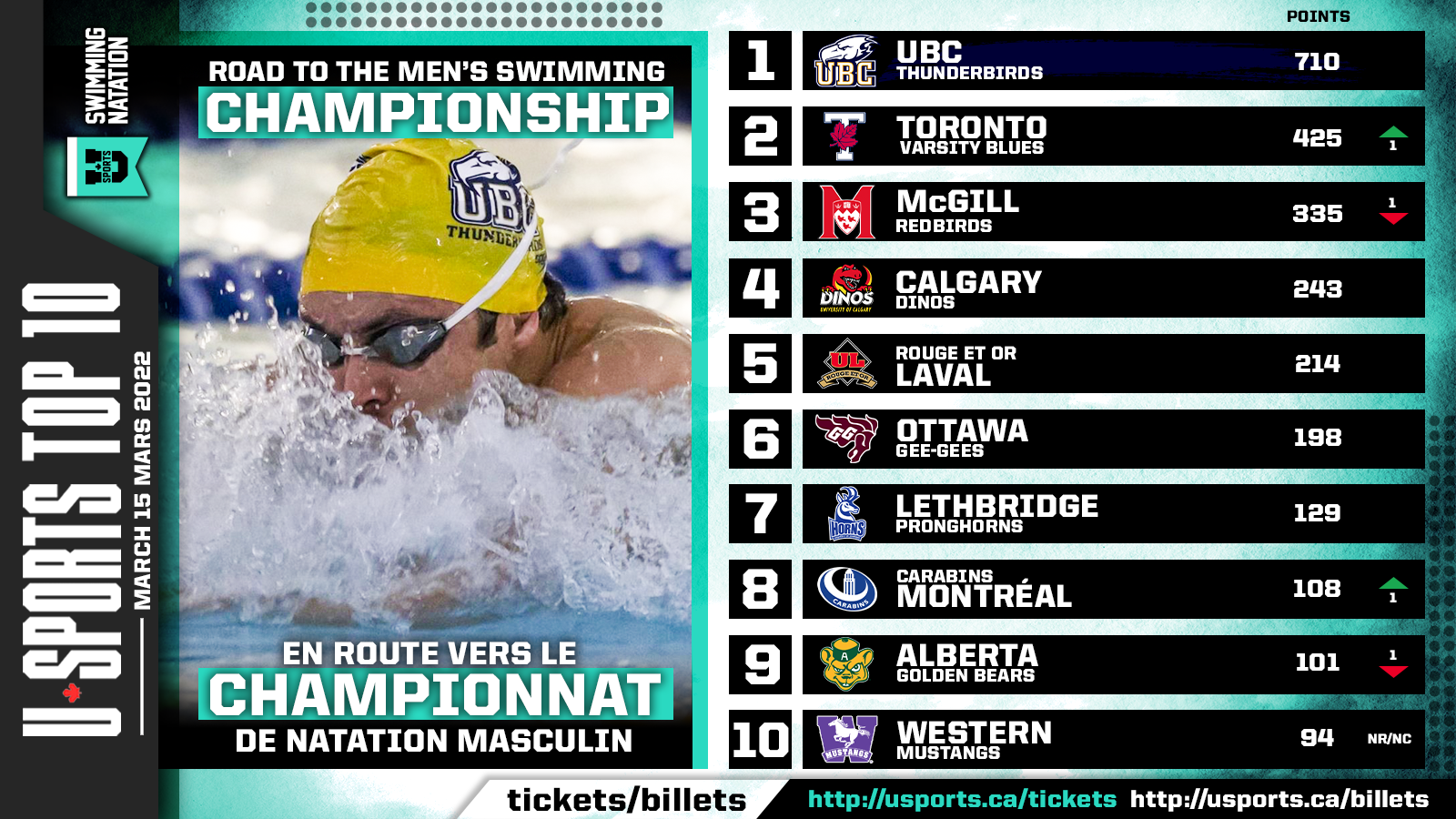 In the women’s pool, the No. 1 UBC Thunderbirds remain atop the rankings, while the Toronto Varsity Blues climbed to the No.2 spot after an electric performance at the OUA championships.

Raili Kary secured OUA swimmer of the year and rookie of the year honours after turning in five gold medals for the Blues, securing the OUA title in the process. 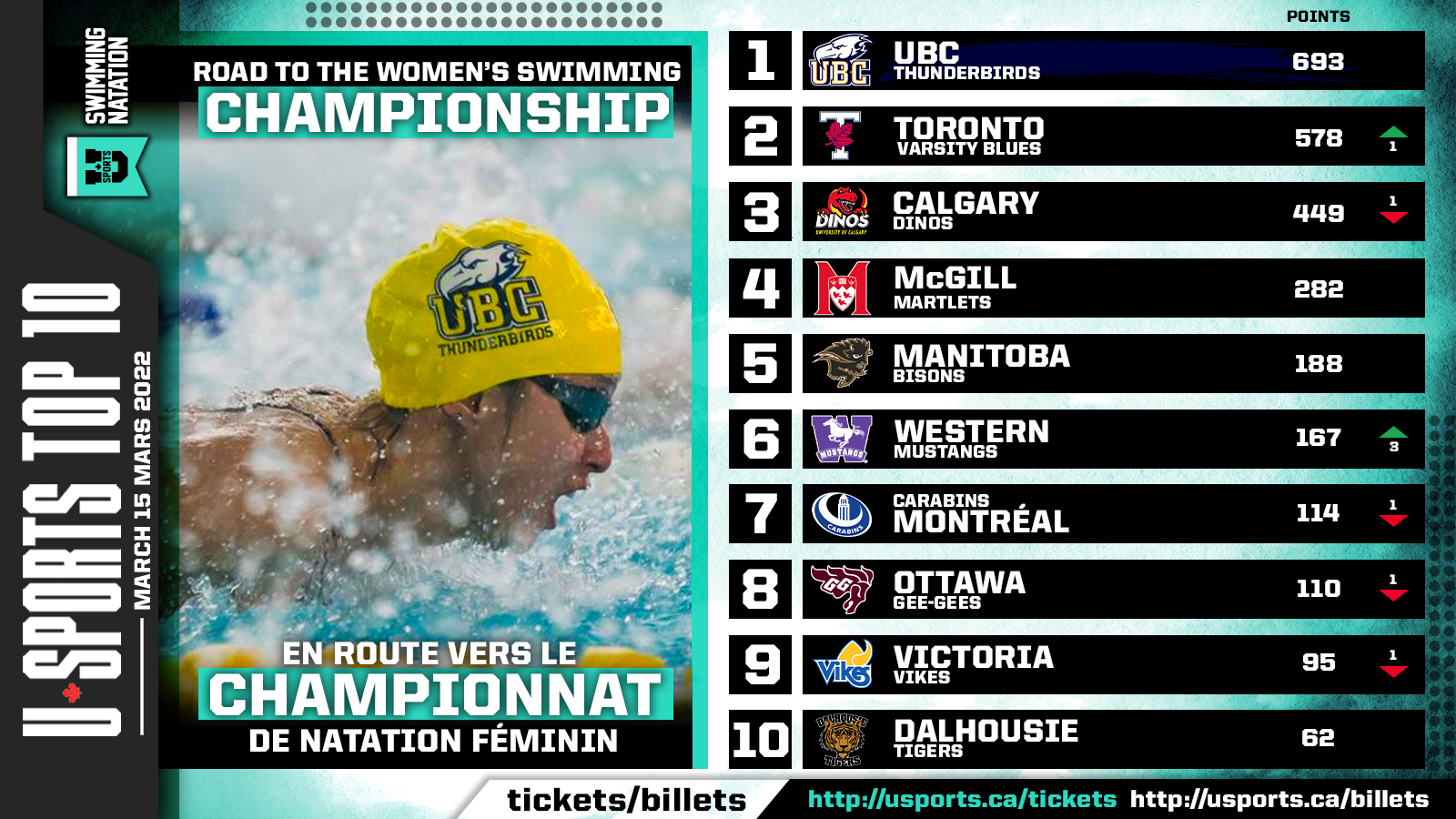 In women’s track and field, the Guelph Gryphons remain the No. 1 seed in the nation heading into the OUA championships.

At the York Last Chance Meet, the Guelph put on a show in the shot put, with three Gryphons cracking the top four. Tamia Noel posted a 13.55m attempt, good for silver, while Mary-Elizabeth Kester (12.62m) and Meghan Mori (12.09m) took third and fourth respectively. 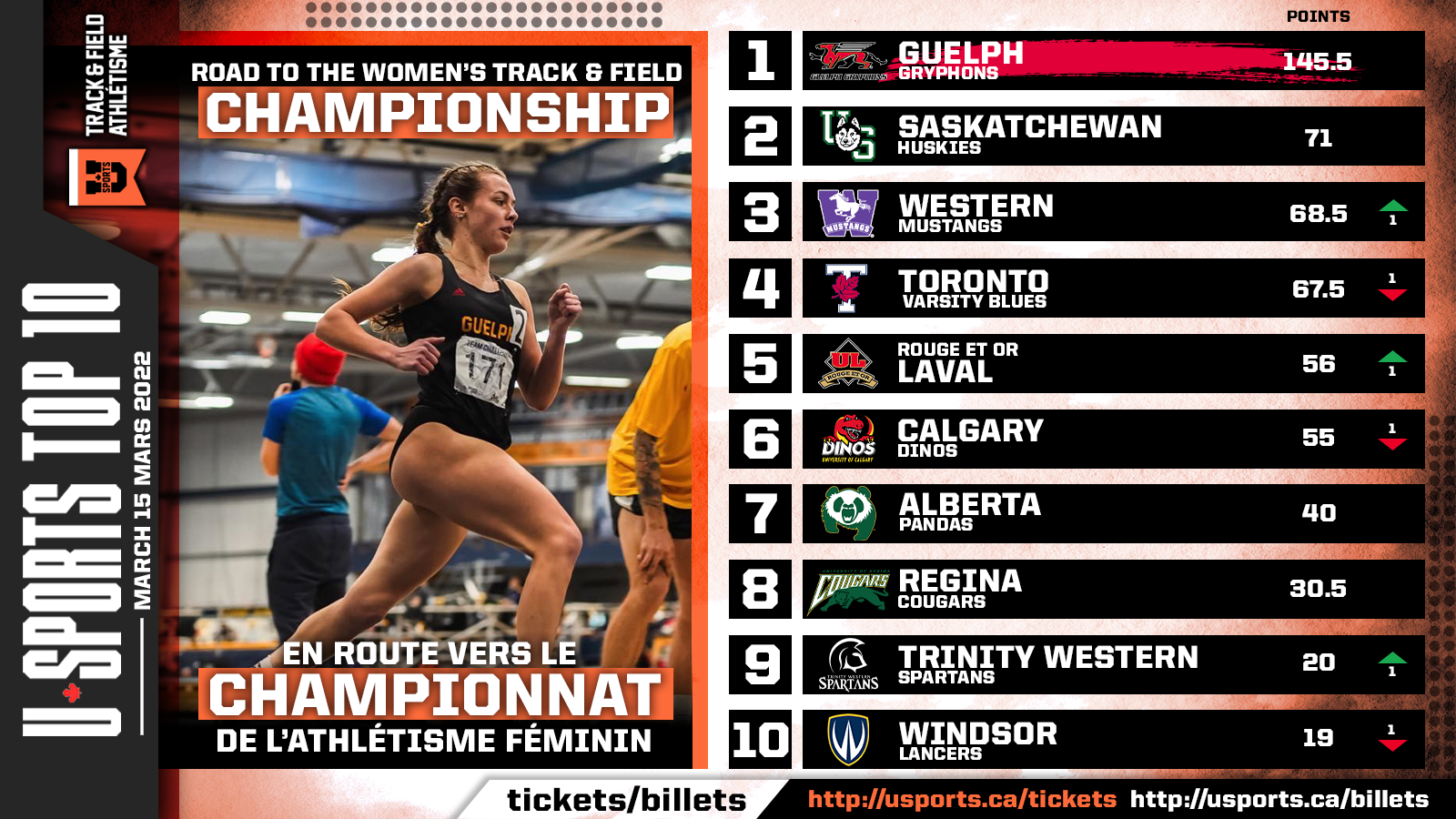 In men’s track and field, the No. 1 Guelph Gryphons head into the OUA championships as the team to beat.

At the York Last Chance meet, Logan Spicer took gold in the long jump with a 6.94 attempt, while Mark Bujnowski’s 18.20m throw smashed the second-place attempt by 3.93m in shot put. 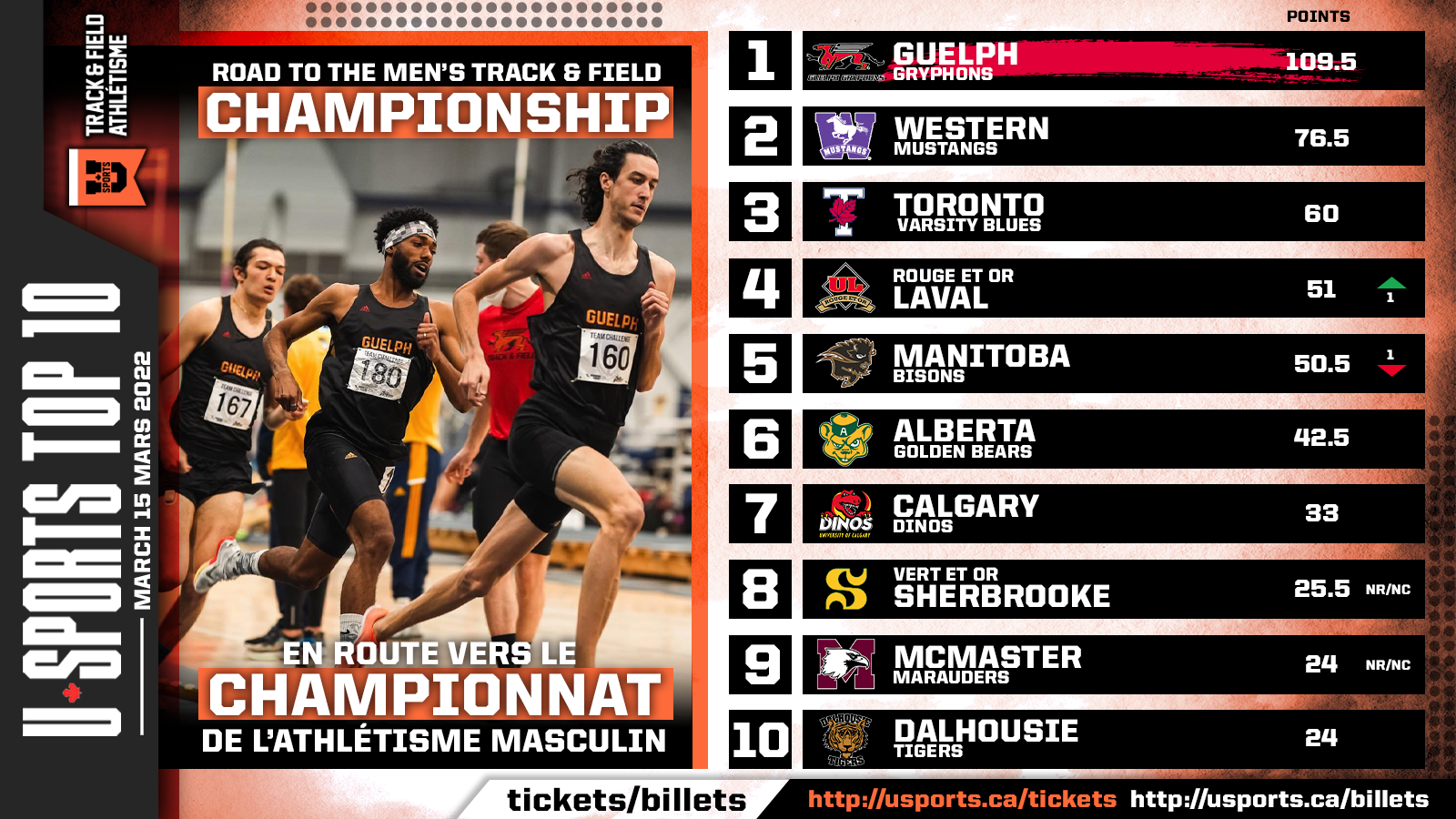