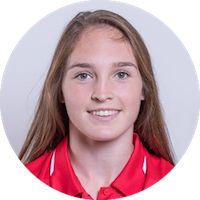 1. What attracted you to Brock University?

I loved the campus, and the sense of community felt around the school. Brock is also close enough to home, so I get to see my family, but also far enough to have my own independence.

An achievement and also a highlight was receiving Rookie of The Year in my first year, and was fortunate enough to be selected for a U18 Canada Tour as well that year.

Once I complete my degree, I hope to travel and play some rugby overseas before settling back down into a career.

Growing up I was fortunate enough to have numerous coaches through both hockey and rugby that pushed me to reach my goals. Specifically, my high school rugby coaches encouraged me to pursue rugby at the national level, and since then I’ve been grateful for the opportunities the sport has provided me.

I’d love to sit down with Serena Williams. She is such a positive role model to so many young athletes in today’s generation, plus all her personal successes and challenges she’s had to overcome would definitely make for great dinner conversation.

I don’t stick to the same pre-game ritual for every game, however often it does include music and a team dance session to the cha-cha slide to get fired up before a game.

Probably cricket. I don’t think I’d be very good at it, but it would definitely be fun to give it a go.

During a hockey game I was awarded a penalty shot, and as I was halfway down the ice, I tripped and fell flat on my face in front of everyone – safe to say I didn’t score!