The weather outside was frightful, but the final result was simply delightful for the Guelph Gryphons.

The Gryphons used their trademark swarming defense and managed just enough offence for a 15-12 nailbiter win over the defending champion Ottawa Gee-Gees in the second of two championship semifinals at the U SPORTS Women's Rugby Championship.

In a close defensive struggle throughout played through a steady downpour on Raymond Field, Ottawa opened the scoring on an Emily Gray try at the 17:22 mark. The conversion attempt failed; in fact, the weather was tough on conversions all evening, with only one of five attempts being successful. 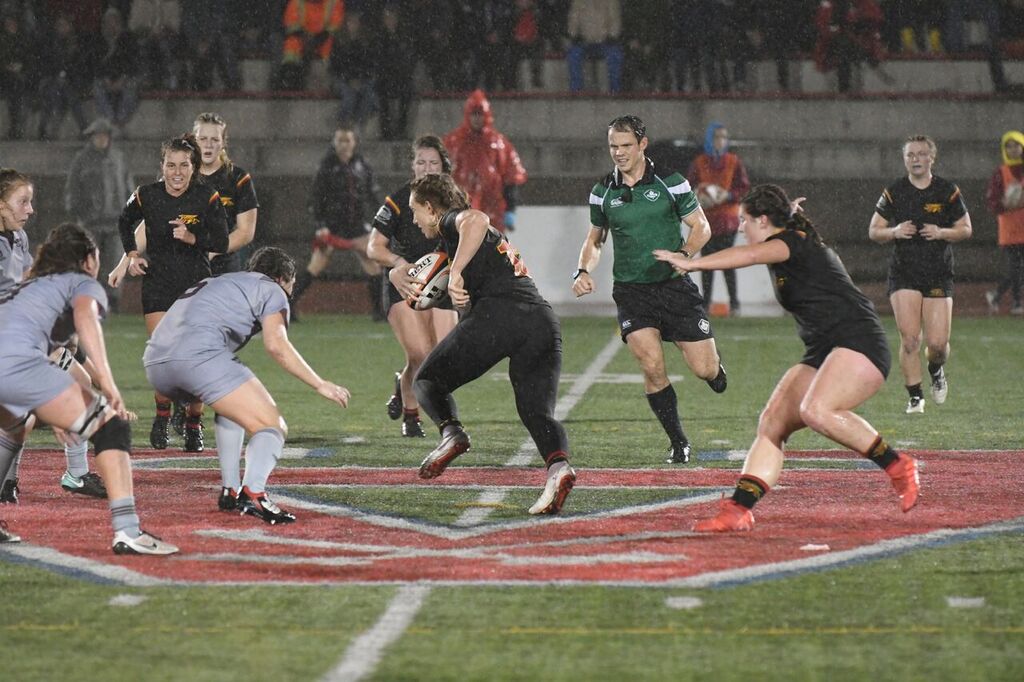 Leading 5-0, the Gee-Gees narrowly missed a second try when they could not keep an onside kick into the end zone in-bounds. Guelph seemed to take strength from the near miss by Ottawa, but while both teams were able to move the ball with some success, scoring chances proved hard to come by.

The Gryphons finally found the scoresheet at the 34:27 mark, just before the end of the first half. Emilie Nicholl, who would be named the Gryphons' Player of the Game, pushed the ball across the end line. A missed conversion attempt left the score tied 5-5.

Guelph continued to apply the pressure, and the Gryphons were ultimately rewarded when Brodie Schmidt scored a try at 38:14 with the game clock well into first-half injury time. Guelph took its first lead of the game, 10-5, into the locker room.

After the break, Guelph drove to the goal line, but was held up by the Ottawa defence. Two minutes later, the Gryphons were again held up on the goal line, but finally, on their third try, Amara Hill scored the try that increased the Guelph lead to 15-5.

Ottawa recovered the ball on the ensuing kickoff, and marched to the goal line before being held up by the Gryphons' defence. The Gee-Gees persisted, and in the 59th minute, Gray scored her second try of the game off a goal-line scramble. Claire Gallagher was good on the only successful conversion attempt of the game, narrowing Guelph's lead to 15-12 and making for a riveting finish.

Both teams turned the ball over in the final minutes before the Gryphons took possession and kept it, running out the clock to punch their ticket to the final on Sunday against the StFX X-Women.

While some might have termed the result an upset over the defending national champs, according to Nicholl, the Gryphons simply “wanted it more.”

“Last year, we were disappointed with our finish at nationals. We came in this year with a positive attitude,” she said. “We kept telling ourselves, 'Keep pushing, and good things will happen.’ You just have to believe they can. If you believe you can, your body ends up doing great things.”

Asked about Sunday's final, Nicholl said the Gryphons would be approaching it “like any other game. We'll keep pouring our heart and soul into it, pushing each other forward.”