Gabrielle Lapointe does not only defeat teams on the field, she kicks ovarian cancer to the curb.

Now five years cancer-free, the fifth-year veteran of Laval University’s women’s soccer team was diagnosed on Nov. 3, 2012, two days prior to beginning her CEGEP career – a pre-university college in Quebec.

Lapointe did not have to endure any treatments, but went through surgery to have the cancer removed, which resulted in a two-month recovery period. She was able to play out her season as normal.

“It changed my perspective on life. Everything that happens to me after that is just not such a big deal,” said Lapointe. “I say ‘Yeah, I will be okay…I will still be able to do whatever I want,’ so it helps you get through stuff.”

Despite this obstacle, Lapointe has had immense success over the last year. The medical student was selected as the RSEQ female nominee for the Top Eight Academic All-Canadian for the 2015-2016 season.

This recognition is given to U Sports student-athletes who maintain an average of 80 per cent or better over the academic year, while competing for one or more of their university’s varsity teams. 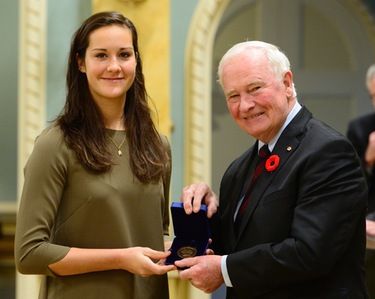 On Nov.8, Lapointe and the other award recipients were honoured at Rideau Hall in Ottawa by Governor General David Johnston, when he presented the fourth annual Governor General’s Academic All-Canadian Commendation. She is the first person to win this award from the Rouge et Or since rugby player Marie-Pier Pinault-Reid in 2012.

“This is a great way to end my college career, (knowing) it wasn’t easy during (my) fifth year,” said Lapointe. “But (I) did it.”

Completing her Ph.D., Lapointe achieved an impressive average of 4.09 out of 4.33 last year. In April, she was also awarded the Jean-Marie de Koninck Award for academics at the Rouge et Or athletic banquet.

On the field, Lapointe was named a tournament all-star last month, as the Montmagny, Que., native helped lead the Rouge et Or to a national title at the CIS women’s soccer championship, the team’s second banner in three years. In 2015, Laval also won a national bronze medal.

“We have such a great team spirit and we have known each other for I would say 10 years and worked so hard together and I think that is what makes us so strong,” said Lapointe.

Lapointe has also received RSEQ first-team all-star honours, and has represented Canada in Gwangju, South Korea as part of the 2015 Universiade squad that finished fourth – the team’s best ever result.

Her success on the field and in the classroom does not go unnoticed by her assistant coach Marie-Pier Bilodeau, who has watched her grow as a player for about nine years now.

“I think Gab is what we call a student-athlete, and student comes first, so she is a great example of that,” said Bilodeau. “She’s obviously a great leader for us on the field, but as a student she is amazing; she is better than anyone else.”

Bilodeau said having a player like Lapointe who is a technical player, a physical one and amazing in the classroom is something very rare to see.

“I would say honestly she is gifted,” said Bilodeau. “When she has the ball in her feet, it’s like magic for her she doesn’t need to work that hard to make things happen.”

Lapointe said her success in both these areas would not have been possible without the help of the faculty of medicine at Laval, as well as her coaches, who helps organize her schedule to make sure she is able to participate in her practices and games,.

“They are accepting that I miss stuff sometimes or I am late, so that is a big part of why I have been successful,” said Lapointe. “It is also because I love what I am doing.”

When Bilodeau looks at the success of Lapointe, she says it is important that she has a clear mindset towards her future.

“What is good with her, is she plays soccer for fun and is amazing at it,” said Biolodeau. “But she also knows her studies are important and that’s where her focus is.”