Throughout the 2017-18 season, U SPORTS sits down with one key athlete, coach, and staff member of each U SPORTS athletic program in our new interview series "Getting to Know…" 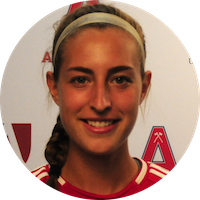 Program: Bachelor of Kinesiology with Honours

1. What attracted you to Acadia?

First of all, Acadia University is a great academic institution with small class sizes and unique undergraduate research opportunities. Furthermore, Acadia was one of very few institutions interesting in allowing me to play on two varsity sports. As a result, it seemed like the perfect fit for me both academically and athletically.

My favourite memory and greatest athletic achievement would be hosting the USport Women’s Soccer Nationals in my fourth year. The support we received from the University and the community was unbelievable, and finishing fifth in the country was a great achievement for us.

After university, I hope to enter the health care profession and pursue a career in medicine or physiotherapy. I also hope to continue to coach and give back to the sporting community.

I think my parents have had the greatest influence on my athletic career. Over the years they have invested an outrageous amount of time coaching, driving, and cheering me on. Furthermore, they always encouraged me to keep playing two sports as long as I still loved them, and reminded me to have fun along the way.

I would love to have dinner with Becky Hammon. Being the first full-time assistant coach in NBA history (and the first of any of the other four major professional sports in North Amercia – NBA, NHL, MLB, and NFL), I would love to discuss the challenges she’s faced entering the completely male-dominated sporting world. Furthermore, she was a professional basketball player herself, who competed at the 2008 and 2012 Olympics and in the WNBA. I would also love to hear first-hand her experiences and ask her lots of on court questions.

Pre-game I don’t have too many rituals that I follow. Typically I put on my left sock and shoe or left sock, shin pad, and cleat before I put on my right (but sometimes forget!).

I don’t have one specific song that is my go-to, instead I usually just listen to something that is up-beat and gets me excited to go out and compete.

If I could try another sport I think it would be competitive softball or baseball. I grew up playing a lot of baseball with my brothers and really enjoyed it, but it wasn’t something that was big for girls back then so I stopped playing.

10.  What’s the most embarrassing thing that’s happened to you as an athlete?

Although it happened in the 6th grade, I still remember very clearly being inbounded the ball right after half-time in a club basketball game. In this moment I forgot which net we were shooting on, and I dribbled down to the wrong end and made a lay-up for the other team. My coach (who was also my mother) was not very impressed at the time!