When coming to Canada, Bruna Mavignier just wanted a chance to play soccer.

Now, nearly a decade after joining the University of Manitoba Bisons women’s soccer team, it has been her mission to stay close to soccer and give back to the game she grew up playing.

Mavignier is now coaching on the national stage. As Jr. Physical Preparation Coach with the Canadian Sport Institute Ontario, the former Bison works with Canada Soccer, seeking to have a positive impact on the next generation of soccer players in Canada.

“It’s a real special role I have to be able to work with the youth because those girls are high-level athletes already,” said Mavignier.  “You have the chance to help them and teach them and shape them – not only soccer stuff, but also high-performance habits and just life in general.”

Most recently, the Fortaleza, Brazil native used her skills as a burgeoning coach and sport scientist to work with the U-17 Canadian National team which travelled to the Dominican Republic for the CONCACAF World Cup qualifiers in April, but has also worked with Canada’s U-20 team, one step below the senior national team. 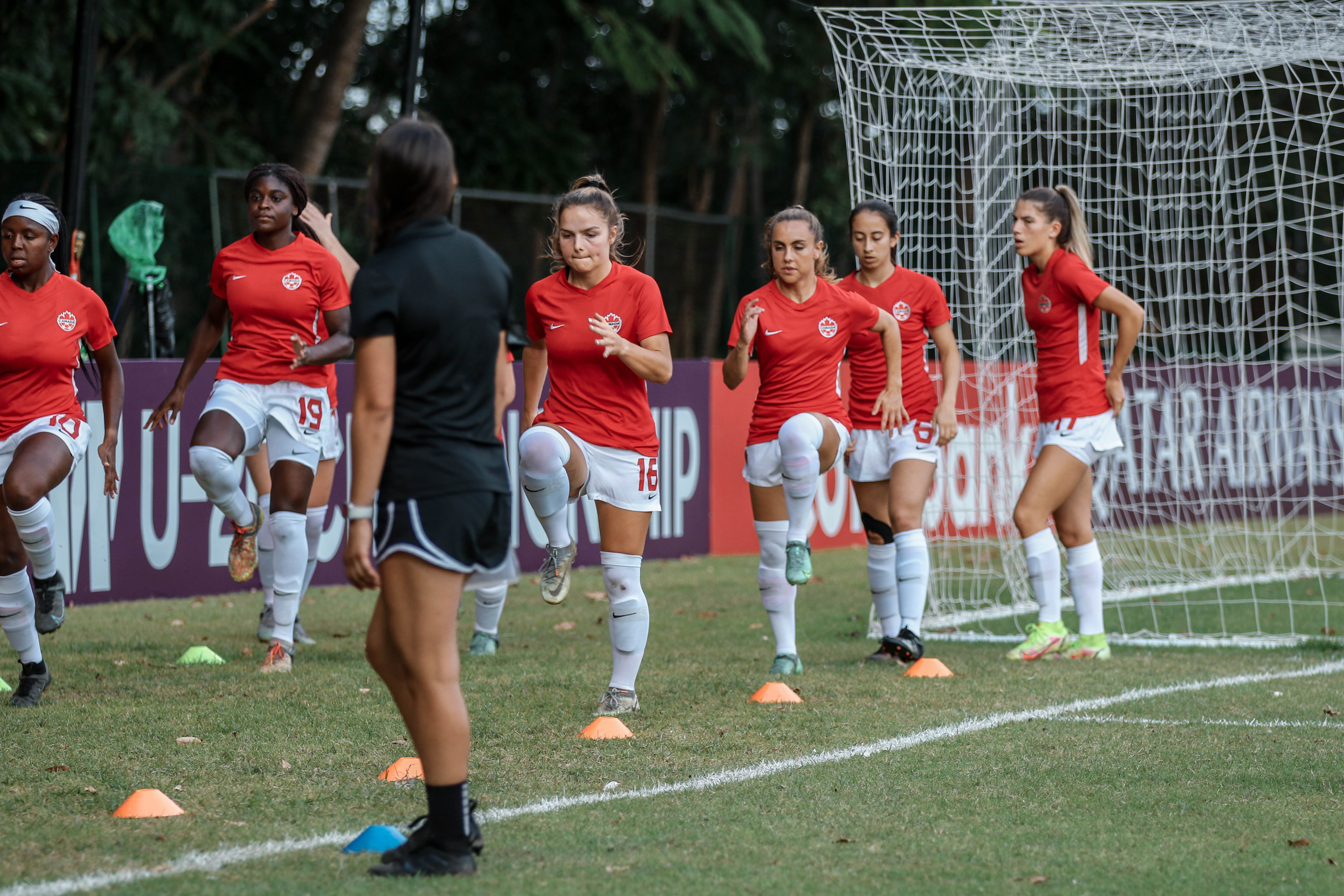 “You have an opportunity to have an impact on their lives more than if they were all grown up,” explained Mavignier. “Even with the U-20’s too, I had an amazing experience there because those players, some of them have been with the senior team already… but they’re still super humble, super nice and really good to work with.”

Mavignier’s journey to Canada Soccer didn’t come without hitches and the road to the national level involved adversity. Injuries caused Mavignier to rethink her approach to soccer and adjust her goals based on the challenges she had faced.

Toward the end of her playing career with the Bisons, Mavignier still wanted to be a part of the game she loves. Bisons head coach Vanessa Martinez Lagunas, who worked with Mavignier since arriving in Canada in 2013, took her on as an assistant coach at Manitoba. 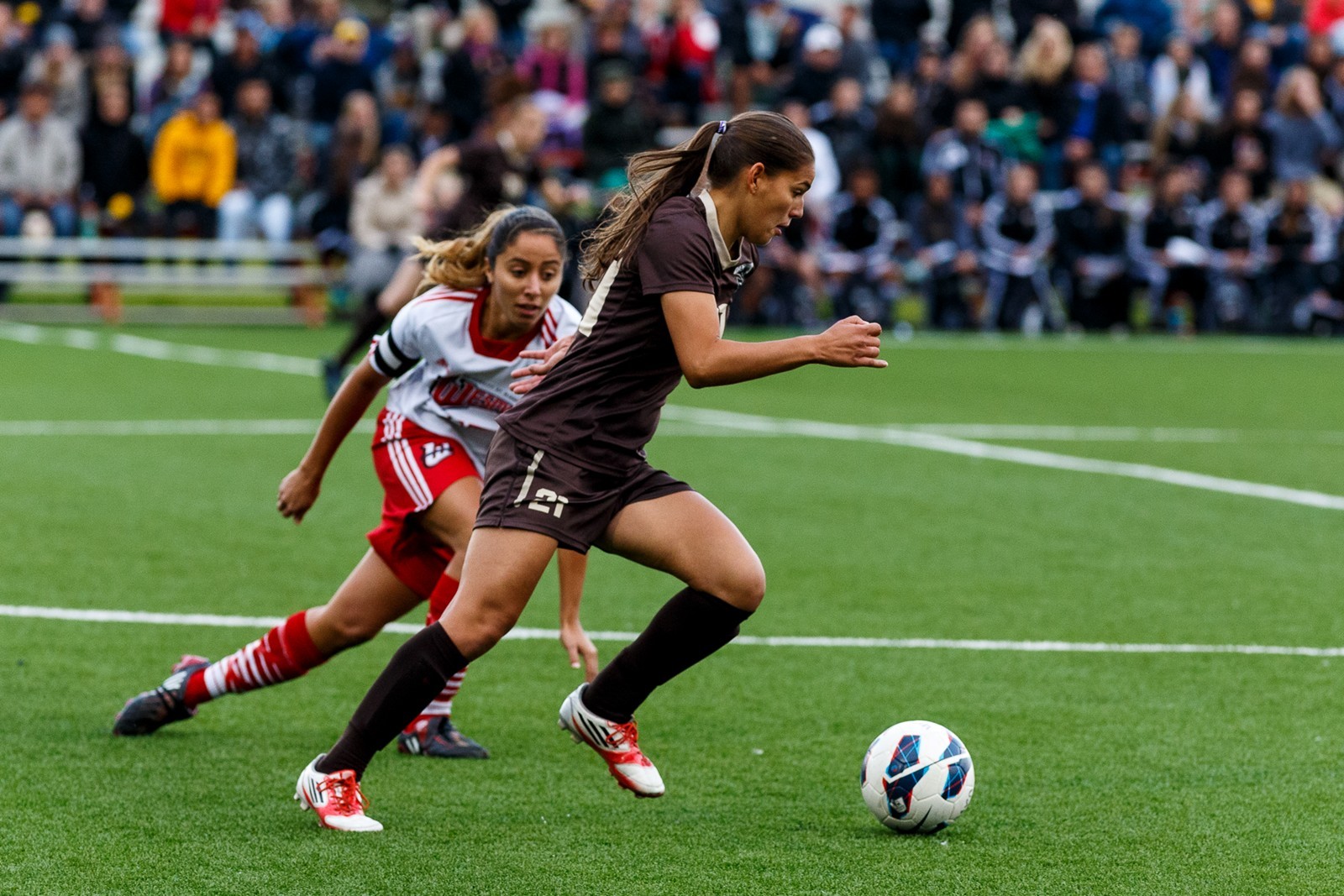 “As soon as I graduated with the Bisons, I already expressed to her that I wanted to keep working with the Bisons, even if it’s volunteer,” said Mavignier. “I told her I cannot leave the team. I love this team. And I wanted to still be involved and help out and give back to the team that really helped me.”

During the 2019-20 season, U SPORTS launched the Female Apprentice Coach Program, with the aim of increasing the number of females in coaching positions across Canadian universities. The initiative matches apprentice coaches who have recently graduated, with a head coach in one of the 11 U SPORTS-sanctioned sport offerings for female-identifying student-athletes.

Lagunas introduced her to the program and became a mentor to Mavignier, jump-starting her journey in coaching.

“For young student-athletes that just graduated and want to go into coaching, it’s a good way to start your career with someone looking out for you, giving you advice and just being there for you. Vanessa also just felt the urge to be able to help me and it was a great financial opportunity, especially for someone who is just starting out."

As someone who would essentially be a volunteer if it wasn’t for the funding of the program, Mavignier took advantage of the opportunity to expand her professional development and credits the Female Apprentice Coach Program for her success in coaching thus far.

“It's good to be able to have that little bit of money to help yourself. You want to be able to devote your time to those things and you can’t just have no income, said Mavignier. “There’s also funding for you to do some professional development. During that time, I had the opportunity to take two really nice courses more related to exercise physiology that I really loved. It’s another incentive to get more soccer female coaches. I really appreciate that I had the chance to participate and it definitely helped me be where I am right now.” 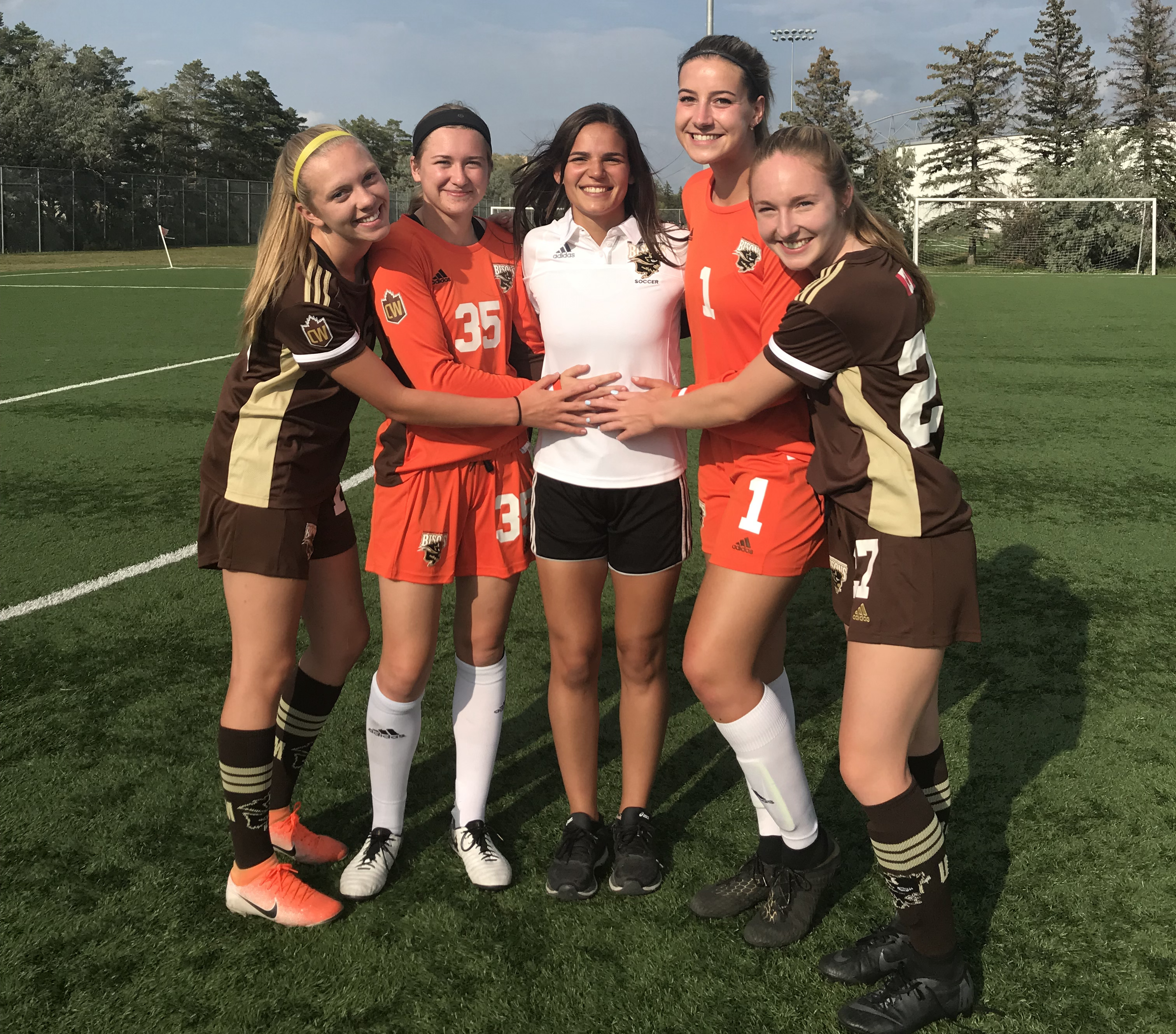 Futsal gyms to the soccer turf

In the bustling city of Fortaleza which fosters nearly three million people nestled on the northeastern coast of Brazil, soccer is ingrained in the culture.

For those who don’t play organized soccer, the lack of greenspaces tends to push kids indoors to play the game they love. Many Brazilians gravitate toward futsal, the fast-paced 5-on-5 game, because of the availability of indoor gyms.

For Mavignier, the jump from the 5-on-5 game to the traditional 11-on-11 game didn’t come without barriers. In particular, the physical nature that comes along with the full-sized pitch posed an immediate challenge when she came to Canada. Head Coach Vanessa Martinez Lagunas nonetheless took a chance and worked with Mavignier to get her match fit.

“Honestly it was pretty hard. I just adapted to play. It’s a completely different game physically. Tactically too. It’s soccer at the end of the day but physically it was completely different. My body was just not used to that. Vanessa and myself had to do a lot of work to get me in shape and be able to handle a full 90-minute game at that intensity. The physical part of the game was very hard. Maybe that’s why I’m a strength and conditioning coach.”

Despite the challenge of shifting to a slightly different sport, Mavignier made an immediate impact in 2014 as a rookie for the Manitoba Bisons, scoring eight goals in 12 games before scoring six goals in six games during the 2015 season.

Injuries were also a big challenge for Mavignier, who tore her ACL partway through her sophomore season, in part due to the high volume of training on turf – a foreign playing field for Mavignier at the time.

Mavignier would experience a second torn ACL – this time in her other knee – costing her the entirety of the 2017 season.

Many young athletes face devastating injuries. Despite the competitive urge to play through the pain, it’s usually best to recognize that the road to recovery is often a long one. The setbacks Mavignier experienced during her time with the Bisons and her knowledge as a strength and conditioning coach have helped shape her philosophy toward coaching and fitness.

“As young athletes, everyone just wants to play. And I did that myself. I just wanted to play over injuries. I wanted to play minutes, score goals and that’s all I wanted, but sometime you just have to be a little patient, listen to your body and give yourself some time. I’m not saying don’t do anything. When your injured you should be doing even more, but in a different way. You need to adapt and modify things.” 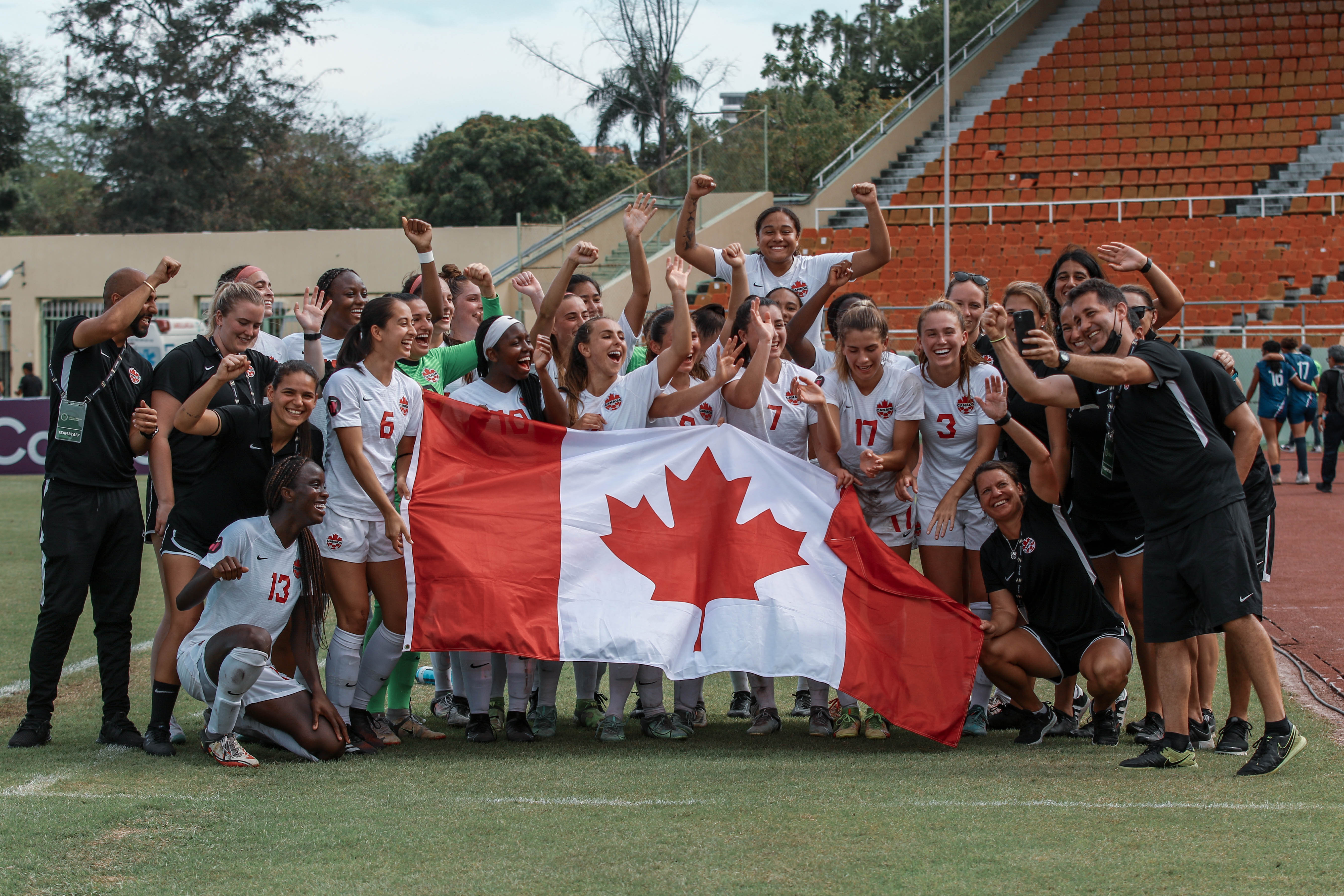 Originally when Mavignier went to Manitoba, she wanted to use her degree in Kinesiology to benefit her as an athlete. When injuries put a roadblock on her playing career, she shifted to using her knowledge of physiology to help the next contingent of players in Canada.

“I was always more inclined to the sports science and strength and conditioning part of things, but I was interested in the human body, how we move and how our system works, said Mavignier. “When I started in sport science, my desire was to help me as an athlete and now it’s more to help others succeed, injury prevention and [to develop] better players.”

While injuries have impacted Mavignier’s off-field training techniques, growing up playing futsal has influenced her proclivities as both a player and as a coach.

“Ball control and speed of play is huge in futsal, so I feel like that definitely impacts me because everywhere I played and coached, that’s what I expected. I expect us to keep possession, I expect us to make little, quick combinations and the speed of play – once you touch it, pass the ball and then move. Pass and move, pass and move. That’s how I still play today. That’s what I expected from my teammates and now that’s how I coach as well.”

While Mavignier has been able to succeed within the Canadian soccer system as both a player and a coach, there is still more work to be done on the equity front.

“When I grew up, female soccer was nothing. Back in Brazil, I struggled so much to be able to play because there’s so much prejudice around it and there’s not much support, so I just want to give back somehow and make sure to grow the sport of women’s soccer.”

Female Coaches and the landscape of soccer in Canada

The landscape of Canadian soccer has gradually been shifting. Success at the national level on both the men’s and women’s side is a product of a more robust grassroots system. This includes a more skillful player pool but paramount to the growth of the game is an informed contingent of young trainers and coaches.

The growth of the women’s game has led to female coaches in key positions across Canada Soccer. From the national senior team, to the U-15 team, females occupy the role of head coach on the women’s side in Canada. 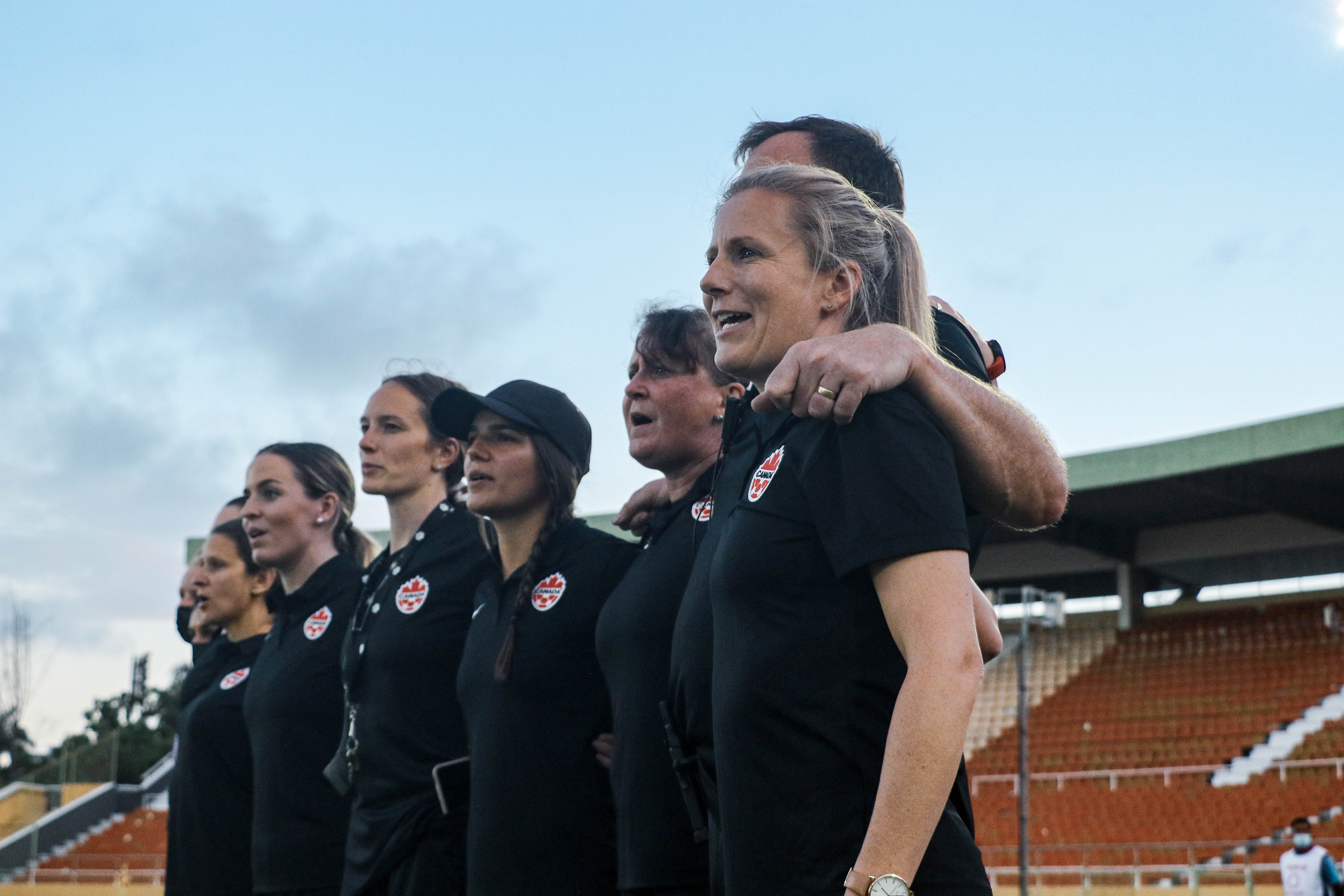 “I’m surrounded by very powerful women that are amazing role models, so I feel very thankful for that. We should have variety so that boys know that if they want to be coaches, they can. And if girls see coaches out there, they know they can be coaches.”

For Mavignier, it’s important to bring in people from different backgrounds and experiences in the realm of coaching, in particular women. The diversity of Canada is pivotal in understanding the idea of equity and equality in sport.

“The most important thing is having female role models you know you can do what they do,” said Mavignier. I barely had any female soccer coaches – female strength and conditioning coaches, I think I had none. Having those role models out there, the girls can see that they can not only be soccer players, they can be soccer coaches, they can be strength and conditioning coaches, they can be referees. There are so many other jobs they can work in sports; not only males can do it. Variety is very important and having equality in sports is amazing.”

In March, U SPORTS announced the 2022-23 contingent of 18 female coaches selected to be mentored in the Female Apprentice Coach Program. These former U SPORTS student- athletes will have the opportunity to sharpen their skills as coaches and trainers, representing universities across Canada in the upcoming season.