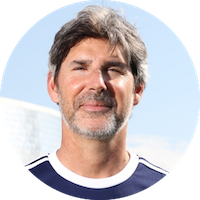 1. How did you first get involved in coaching? What was your path to your position as head coach of UQAM?

At 17 years old, I graduated from school in Marseille and my coach found I had the necessary qualities to pass onto the young athletes. I started my young career at UQAM after having been a university athlete in 2005.

2. How would you describe your coaching style?

Marcelo Bielsa said that he aims for victory and that the fastest way to reach it is to be a player in the game. This summarizes my philosophy well; my style is about giving my players freedom in their roles.

3. Which coach do you admire the most, and why?

Johan Cruyff. He understood the essence of the game, integrating a new way of thinking and playing into soccer.

Playing and coaching – I don't recommend it.

My career with the Citadins. I understood the importance of my job and of my life with others.

Don't skip any steps. There are always key moments in a career and you need to know them to understand them.

7. How have you changed as a coach over time?

I’ve become calmer and I listen to my players and my staff more often.

8. What principles/values etc., have remained the same?

The generosity of the work and the perseverance in the effort.

Being with my family and friends sharing good times.

10. What is the most embarrassing thing that’s ever happened to you as a coach?

Probably seeing one of my best players step off the field during a major game to go to the bathroom. I understood his intention afterwards, but at first I panicked…