Many international athletes from around the world jump on a plane to embark on their newest journey of becoming student-athletes at the Canadian university level.

Being a top-tier athlete in their home country has its pros and cons but Mount Royal Cougars men’s soccer transfer David Schaefer is on a mission to excel in both.

Schaefer, 19, grew up in the German capital and had a link to sport going back to his early days in childhood where at the age of four, he picked up on the beautiful game.

“A huge difference from Canada is that you have fields everywhere, on the streets you have cages so soccer was with me all the time,” he says. “I grew up in the centre of Berlin, went to school there…basically every day after school I played soccer.”

Schaefer’s parents worked in the political sector and were forced to move to Tunisia for two years, forcing the pre-teen at the time, to take a hiatus from his childhood club. He attended an American school and helped him learn English in the process but he stayed in touch with soccer by playing on the school team during his time away from home.

When he came back to his native Germany, Schaefer was forced off his team after his coach lost trust in his ability to continue growing a career.

“Their coach didn’t think I was good enough or built for it,” Schaefer says. “Basically, after that I switched clubs almost every year until high school…I don’t regret any of those moves.”

Schaefer found himself at the academy of BFC Dynamo Berlin. One of Germany’s more traditional clubs that has a rich history dating back to the East German days.

“I got a league higher every year and ended up playing (at the) Under-19 (level) in the second highest youth league in Germany,” he recalls.

His club used to be champions of Eastern Germany and were once on the same level as Bayern Munich. Since then, the club has fallen on hard times. Schaefer recalls his days playing for such an honourable club.

“I got to play in an old stadium that 50 years ago fit 30,000 people - that was pretty cool,” he says. “Our men’s team played in the fourth-league and I got to train with them every week.”

At some point however, Schaefer had to think about his life outside of sport. He began to explore the education route but still wanted to play soccer at a high level.

“I didn’t see a big future,” he says on the thought of staying in Berlin and continuing to train in the academy. “They wouldn't have taken me so I would have been playing in the fifth or sixth league. There’s not really a perspective. You can make some bucks but not enough. Even the fourth tier is hard.

“It was a nice experience, I got to play with a lot of former professionals.”

Focused on a new path towards getting an education, Schaefer began to look more closely at schools in the United States and Canada. Ultimately, Mount Royal and the City of Calgary would become his home for the next four or five years.

“At the end from all the offers this was the best one,” he says. “It wasn't a hard choice because I would've been in small American college towns (in the NCAA). It wasn’t hard for me to prefer the Canadian first division.

“Calgary was most interesting for me, it has the mountains, it’s a big city and I’m from a big city too so I didn't want to live in a smaller town. In Germany we say Canada has a great educational system and we always prefer that over the American one. Not only the program, not only the city but the school was a difference.”

As a 19-year-old who left his native country, he left not only a rare opportunity of leaving behind the German soccer pyramid, but also his family. When Schaefer landed in Canada, he faced some drawbacks he had to adjust to off the pitch.

“Living situation was a bit difficult but got it figured out. I lived with one of my teammates then I moved into a shared house,” he says. “Another difficulty is I don’t have a car but I live close to school. The connection with athletics is kind of hard for me because of how different soccer is compared to back home. It’s more about physical and tackling aspects more than skill.” 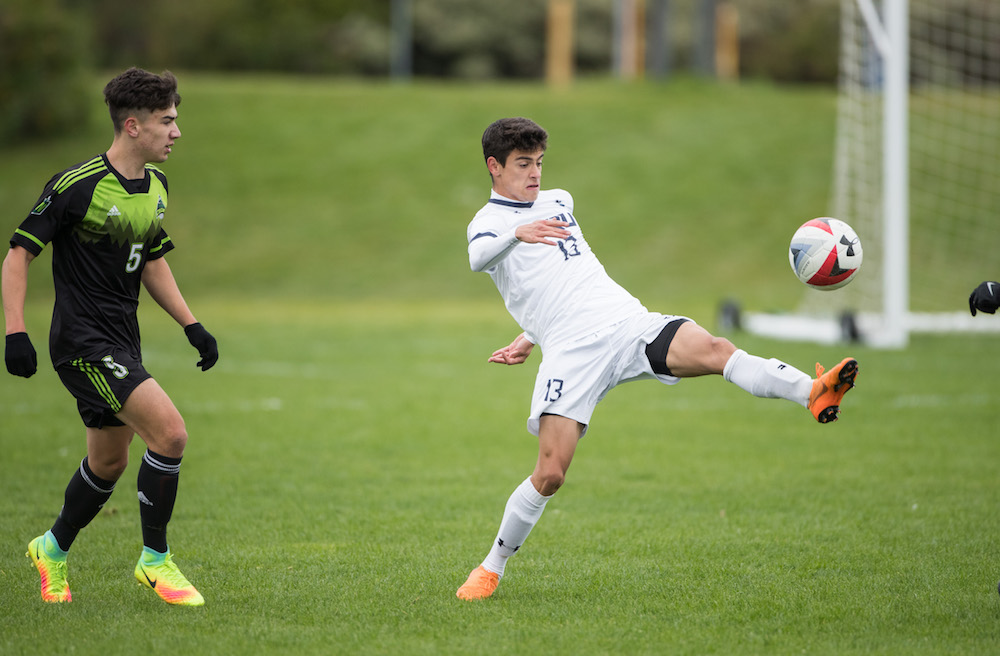 Ryak Gyaki, head coach of the Cougars men’s soccer team, says Schaefer has fit right in with the club in his rookie season.

“You don't leave home unless you are a strong minded person – he’s tried to do most of his things by himself and be very resourceful,” says Gyaki. “You don't leave Germany for Canada just to study without having courage and self belief and be able to handle everything by yourself.”

Gyaki found out about his transfer in rather peculiar fashion.

“I got an email from a recruiting company,” he says. “He’s one of the few players where you actually watch the video and think there's something to him and he can actually play…I knew where he was, I actually used to play with the coach of the first team and he also said he’s a good player."

“He took a risk and jumped on a plane and landed here two days before pre-season.”

Gyaki adds that he has had international recruits join the Cougars before during his tenure as a head coach, but none of them have been actively pursued. The fourth-year bench boss believes that Schaefer will have in impact on the program in the coming years.

“Four, five years is a long time to stay, he will improve training and little things quietly,” says Gyaki. “He would remind me of different standards from different countries. He will become a leader and can really make an impact on the league once he settles in and hopefully taking us to the next step with him.”

Dan is in his third year of the journalism program at Mount Royal University. He is  the sports editor of the campus newspaper The Reflector and also works as a game writer for the Cougars, covering soccer and hockey. Dan is looking forward to contributing to U SPORTS and making a positive impact in the sports media world.