NOTE: U SPORTS Top 10s are returning over the coming weeks as conference play restarts due to the lifting of COVID-19 restrictions. U SPORTS publishes Top 10 rankings when 3 of the 4 conferences are in full competition. Therefore, basketball’s first ranking of 2022 will be released on Feb. 22, while wrestling and track and field rankings will return as they become available.

The Toronto Varsity Blue’s Women’s Hockey Team remains the team to beat after a lengthy hiatus due to COVID-19 restrictions.

The Blues (9-1) returned to play in stellar fashion as third-year goaltender Erica Fryer blanked the Rams (3-5) 1-0 and 4-0, capturing two shutouts in as many games.

First-year forward Aili McKeown scored the lone goal for Toronto in their first tilt, while Olivia Hilton scored a pair of goals in the second game. Laura Ellis and Céline Frappier also registered a marker apiece in the victory over their cross-town rivals. 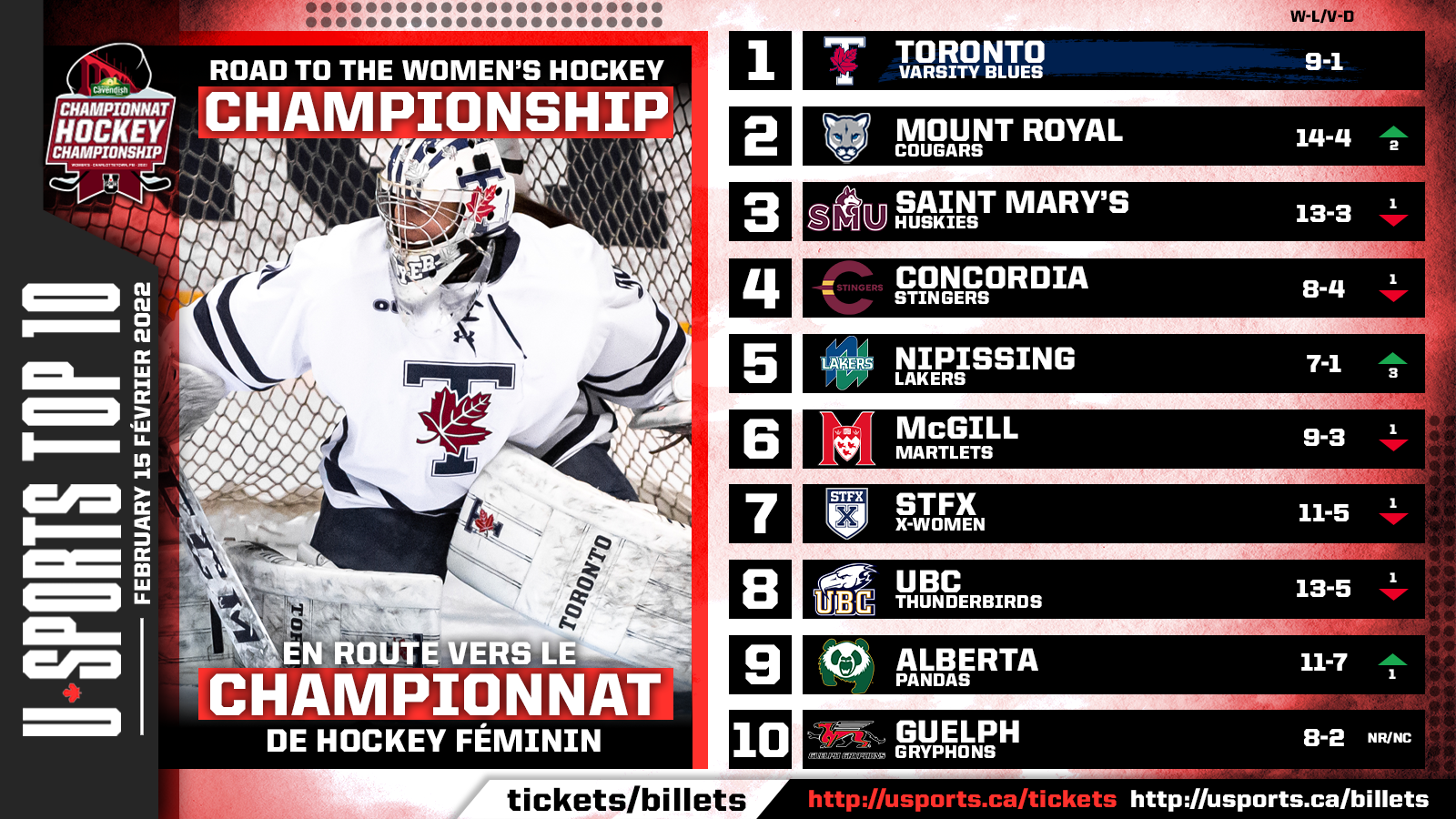 On the men’s side, The UNB Reds(17-2) remain atop the rankings after defeating the Université de Moncton Aigles Bleus (5-14) in a 3-2 shootout victory. Reds captain Samuel Dove-McFalls converted the shootout winner, completing the comeback in both teams’ return to competition. 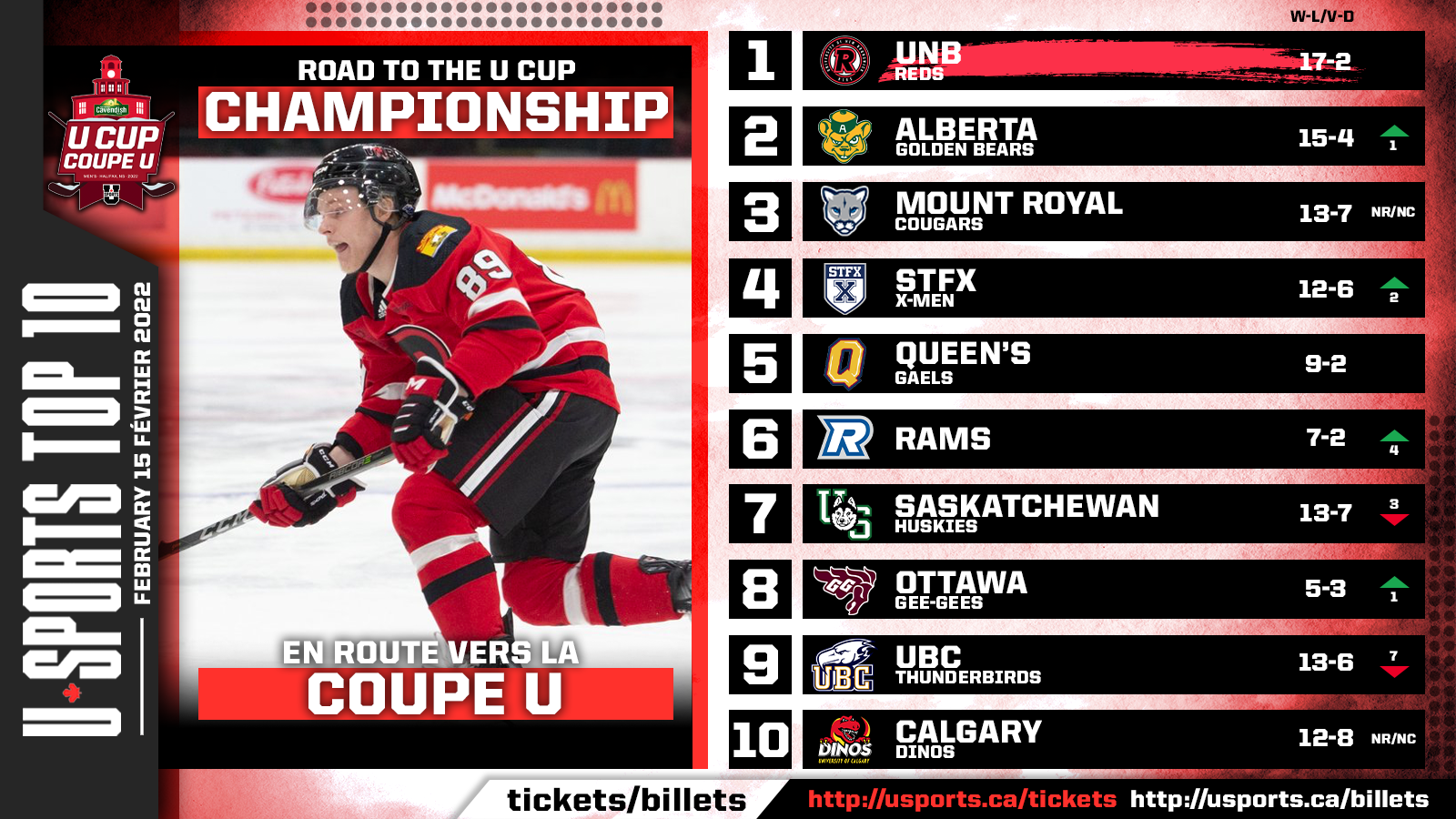 On the women’s volleyball court, the Trinity Western Spartans (11-1) jumped up the rankings to the top spot, usurping the Alberta Pandas (13-1). Savannah Purdy put on a show against the Thompson Rivers Wolfpack (1-13), making eight service aces in a 3-0 sweep. The eight aces tie Purdy for second-most in TWU’s women’s volleyball history. 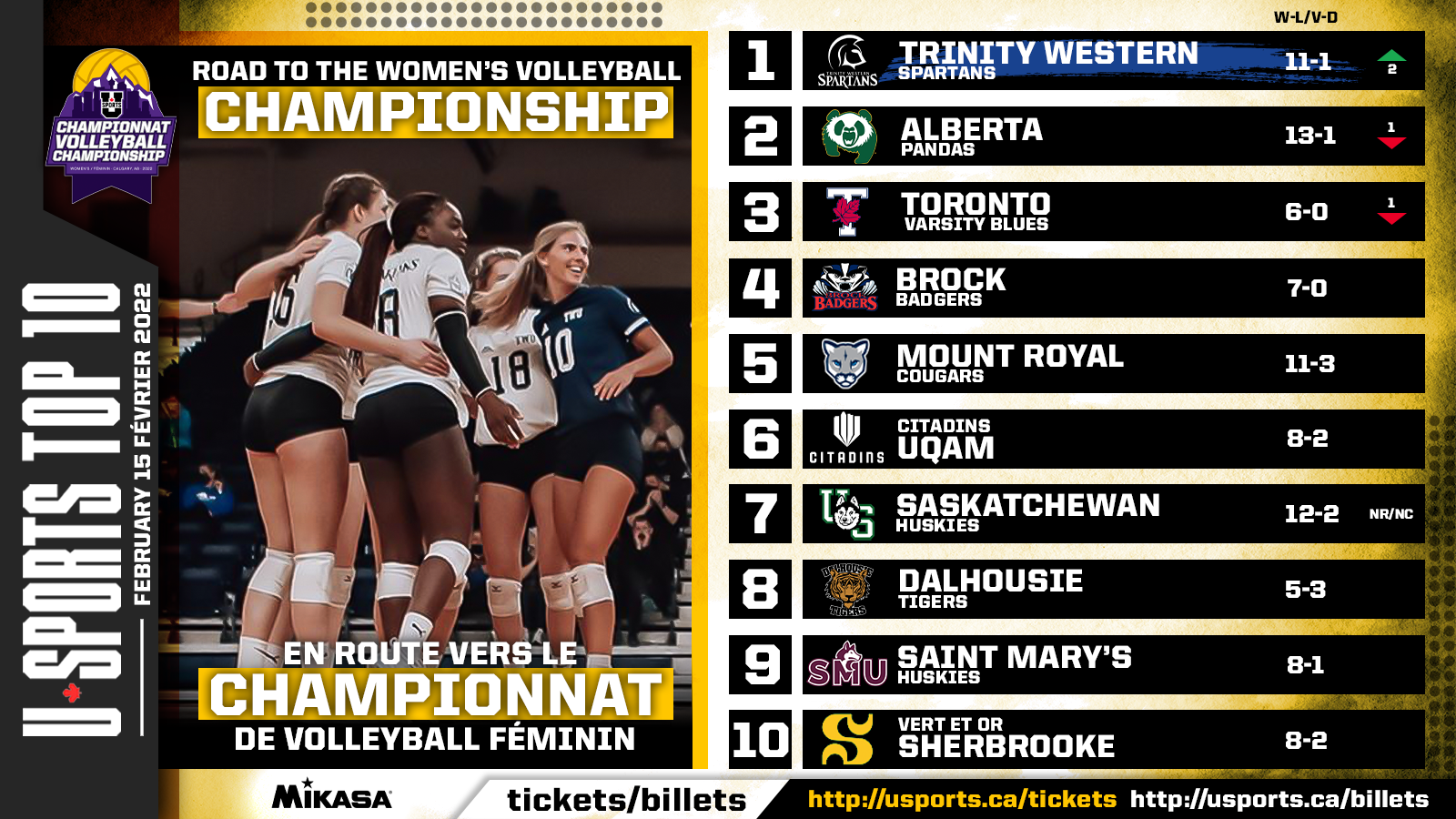 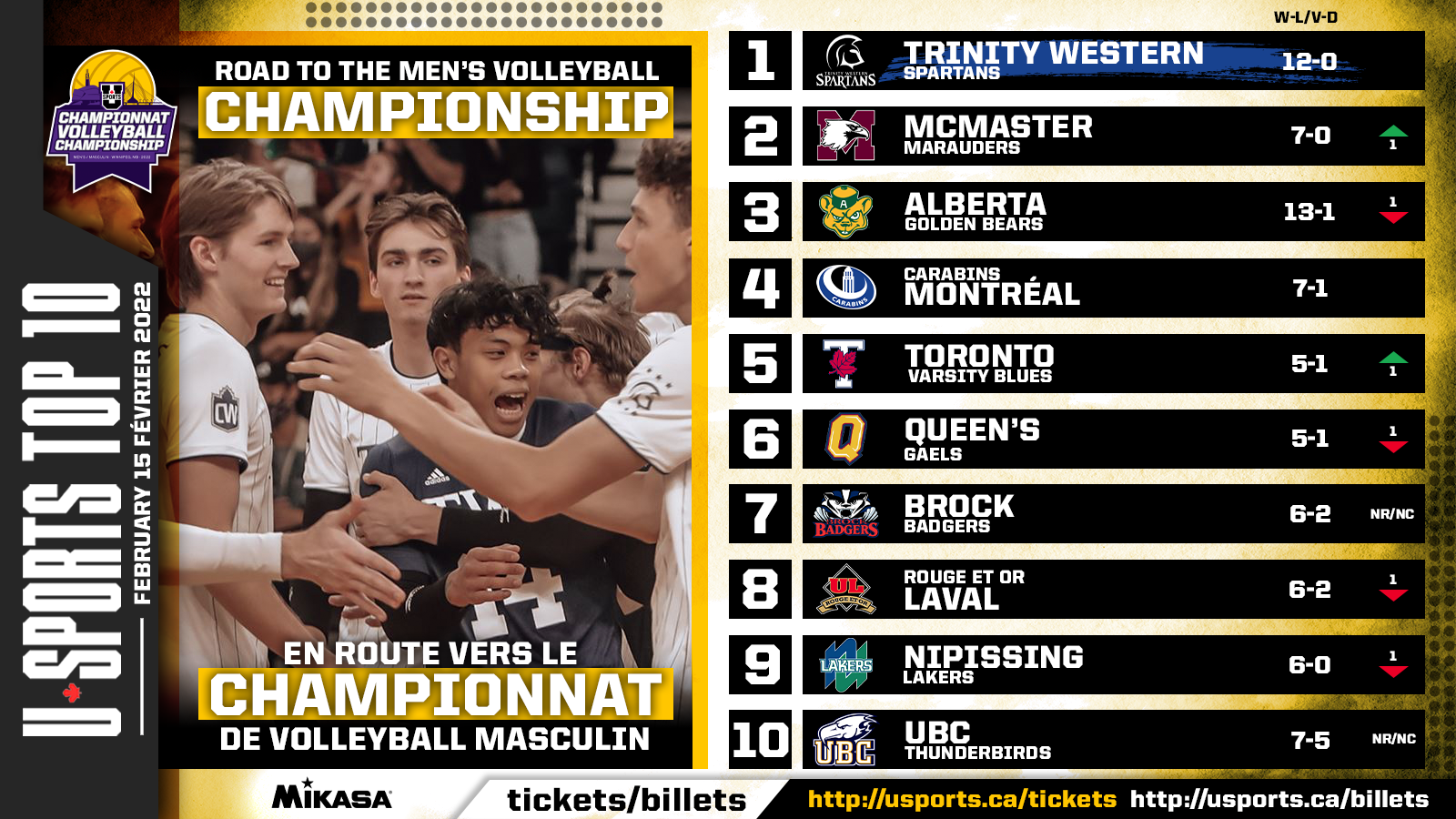 In the pool, the UBC Thunderbirds top both the women’s and men’s swimming rankings. The Thunderbirds enjoyed another standout showing this weekend amassing 37 total wins at the two-day West Coast Collegiate swim meet held Saturday and Sunday at the Saanich Commonwealth Games Pool. The WCC meet is UBC’s final tune-up event ahead of making another run at the U SPORTS Swimming Championships held at the University of Laval from March 24-26th. 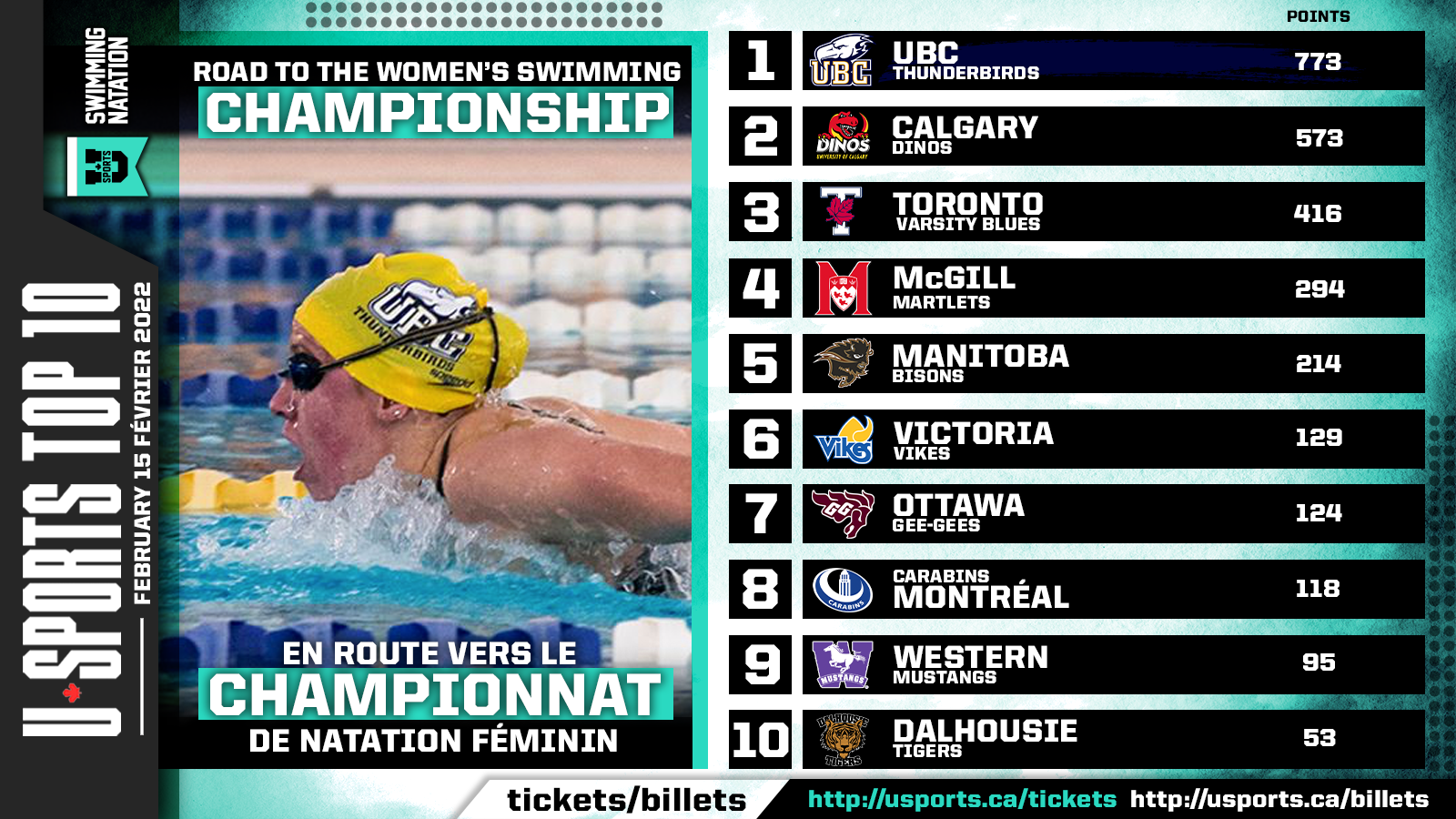 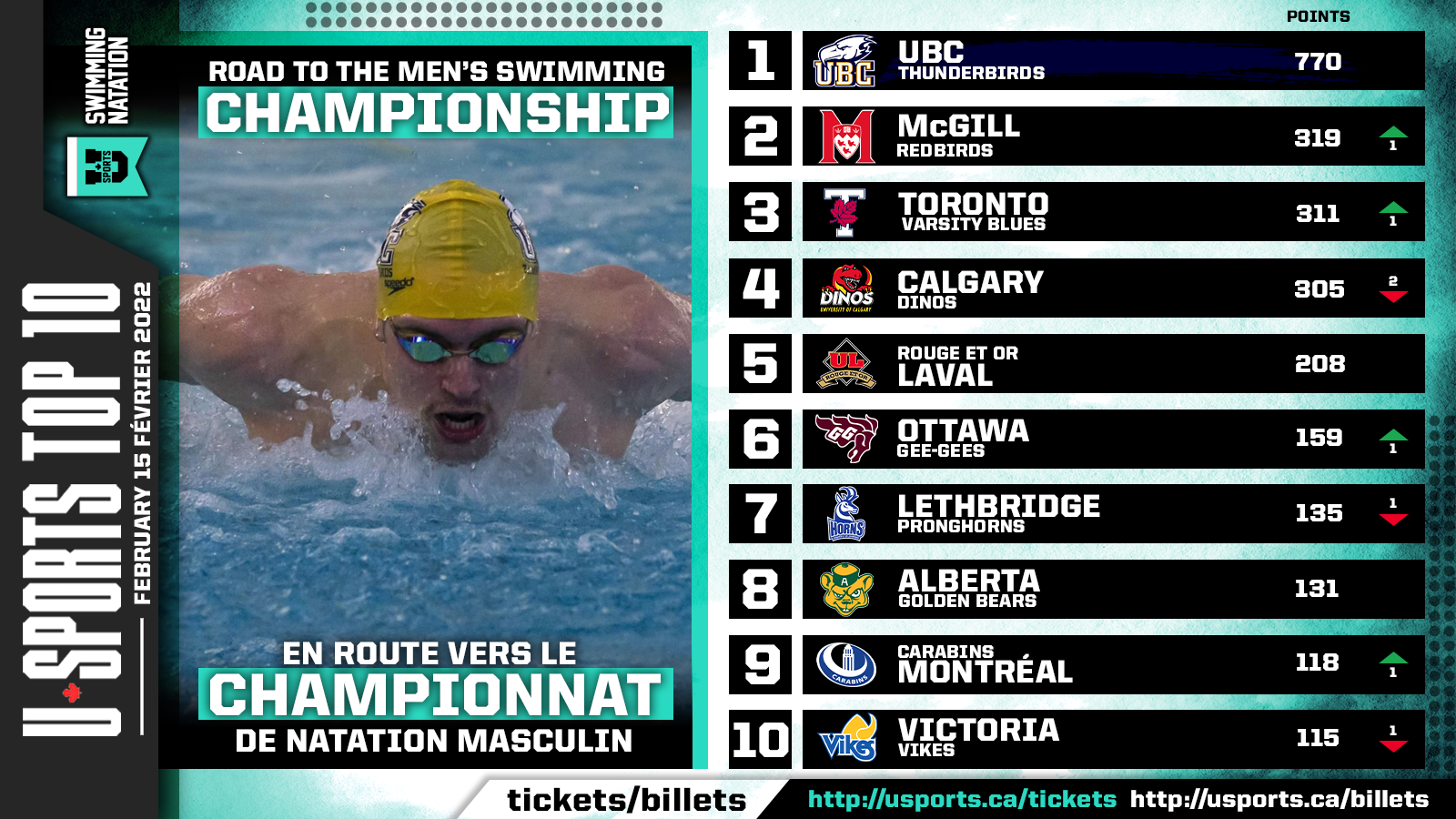