As Kelsey Balkwill rounds the newly surfaced bends of the Dennis Fairall Fieldhouse at torrid speeds, she peers at the nearby Lancer record board graced with names legendary in the Windsor track and field community.

After only a few short months as a Lancer, the human kinetics master’s candidate has proven to be cut from the same cloth as the other standout athletes immortalized on the wall. The Essex, Ont., native’s name now sits above Olympian Melissa Bishop’s, and across from Lancer greats Ryan MacKenzie and O’Brian Gibbons, among others. The board reads: “300m - Kelsey Balkwill – 37.99.”

As she finishes her workout, she stares at the blue track, as she patiently waits for Mar. 7 – the day the best U SPORTS track and field athletes will measure themselves to her in her own backyard.

A goal for the U SPORTS championship is to win, but I would also want to take a crack at the Lancer 600m record.

Aiming for the Olympian’s record is not wishful thinking for Balkwill. The 400m hurdles specialist has been having a year for the ages. First, she rewrote the Lancer 300m record at Windsor’s Can Am Classic – her first race of 2018.  Two weeks later, in Indiana, she ran to a time of 1:30.84 in the 600m - severely threatening Bishop’s school record. Then, she set a personal best of 52.64 in the 400m at the Tyson Invitational in Arkansas in mid-February. Her clocking qualified her for the IAAF world indoor championship in London, England, which happens one week before the U SPORTS Championships. 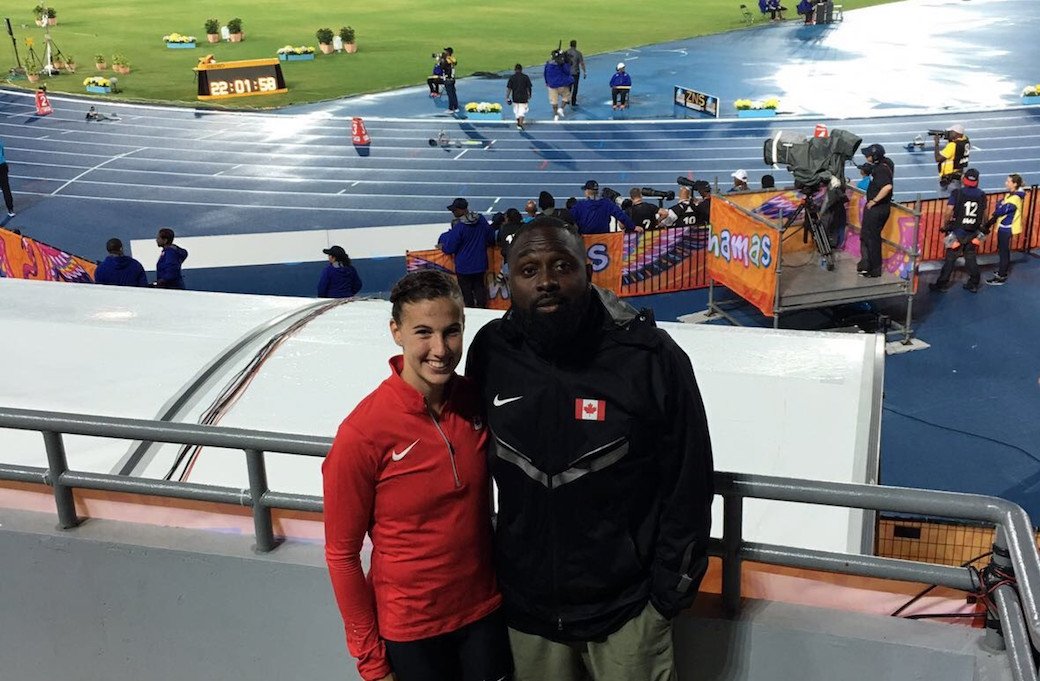 The former NCAA athlete for the University of Miami Hurricanes has been making a rigorous racing schedule look easy by routinely setting personal bests and breaking Lancer records by the week. But, as is the story with most athletes, success comes from patience, and often supersedes a struggle. Balkwill’s case is no different.

Mentally, when you get a single injury, you can find the energy to fight through it. When it happens multiple times, it just becomes exhausting.

“There were many points before today when I wanted to quit,” she remembers.

A promising high school career in Windsor had led to approximately 65 scholarship opportunities across North America. Balkwill remembers choosing Miami for its temperate weather and focus on athletics. When she got there in 2011, however, disaster struck.

“I was dealing with a few minor injuries in the fall and winter of my freshman year,” recalls Balkwill, “So, I debuted as an NCAA athlete in the outdoor season. In my first race, the 400m hurdles, I broke my navicular bone on hurdle seven. I heard it and felt it – I knew it was bad. As it turned out, I had multiple stress fractures in my foot. My freshman year was written off.”

What followed was a string of more stress fractures between sporadic training bouts.

“I dealt with more foot problems, and had to miss my sophomore outdoor season. I did not run the next summer,” she says. “In my junior year, I would show up to indoor races with a walking boot, and just take it off to race. I was running nowhere near my potential.”

The injuries were taking their toll on Balkwill.

“Mentally, when you get a single injury, you can find the energy to fight through it. When it happens multiple times, it just becomes exhausting,” she says, admitting she even started hating the sport.

“The most frustrating aspect about being injured, was that I knew how good I could be. But, I also knew that as long as I would stay injured, I would not run fast. That was difficult to live with. Between unsuccessful years at Miami, my family would encourage me to stay patient and pushed me to go back to school after the summers at home, when I no longer wanted to return to Florida. They knew I loved running deep down, and wanted to see me be happy.”

If there was a positive point in Balkwill’s first three years of school, it was those summers at home. Though that time did not lend itself to much running, she was able to use the summer months to reconnect with her high school coach, Kurt Downes.

When Kelsey came in as an eighth grader, she was a physically fit kid who wanted to get better. It made me start to like coaching.

“When kids go away to school, I expect them to transition to their varsity coach’s training plan,” says Downes. “My role becomes to simply be there if they need anything from me. In Kelsey’s case, she would come back in the summers, and clearly be in need of some adjustments. We made sure we got her healthy, we would work on her nutrition, and we would send her down in the fall in better form than we would receive her.” 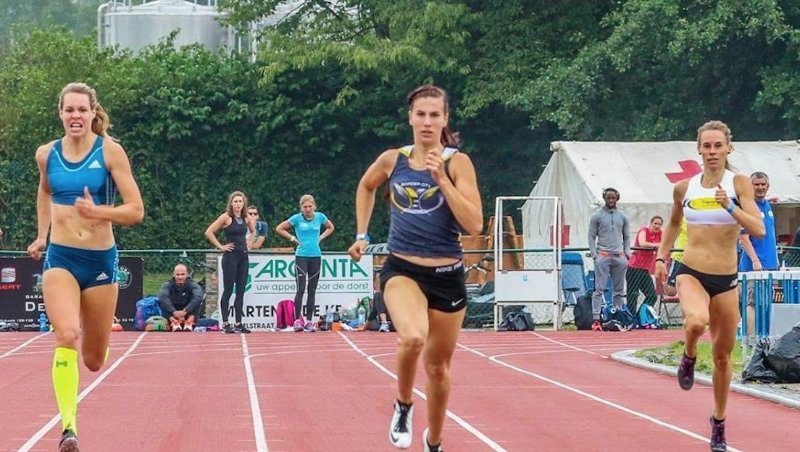 Though he only saw her for a few months per year in Balkwill’s undergraduate career, Downes did all he could to help her get back on track. His willingness to help her succeed was deeply rooted, for she unknowingly had helped him kick-start his career as a coach. Downes was fresh off three years as a Lancer track and field captain, where he was nationally competitive in the sprints and jumps, when he began coaching. One of his first athletes was a young, pre-teen Balkwill. Quickly, their relationship became symbiotic.

“I was just starting to learn about coaching,” he recalls. “When Kelsey came in as an eighth grader, she was a physically fit kid who wanted to get better. It made me start to like coaching. I really enjoyed working with her. She was not like other kids. Anything I advised her to do, she would take the time to learn it properly, and apply it. Additionally, she hates losing just as much as I do. We understand each other like that.”

It came as no surprise then that Balkwill finally achieved success in her fourth year with the Hurricanes and made the decision to pursue track and field post-collegiately. She also knew exactly where she wanted to do it.

“I wanted to come back to Windsor and train with Kurt. He knows me so well as an athlete and person, and believes in the goals I set for myself. That it made me want to train at home.”

My current training partners make me take such a healthy approach to track and field. We laugh and joke during practice, but also get so much done. It is a great environment to be in. We push each other to be better.

Since having graduated from the NCAA and fully reconnecting with Downes in the summer of 2015, Balkwill has remained healthy, achieved personal bests and has qualified for three Canadian national teams.

“I told her she might be better off at other places,” recalls Downes. “But here is where she wanted to be.”

“My current training partners, (which include U SPORTS qualifier in the 60-metre hurdles Alexia Lamothe and the third-ranked 300m runner on the Canadian varsity circuit, Courtney Rivait) make me take such a healthy approach to track and field. We laugh and joke during practice, but also get so much done. It is a great environment to be in. We push each other to be better.”

Now, with the help of her teammates and Downes, Balkwill is in the midst of what will be the three busiest weeks of her athletic career: the OUA Championships, the IAAF world indoor championship, and the U SPORTS Championships happen on three consecutive weekends.

“We made sure we had the right team of people helping us,” states Downes. “We worked on sport psychology in the fall, we have had constant help from Kelsey’s physiotherapist, who will be present at OUAs and U SPORTS, and we work very closely with a nutritionist.”

Balkwill also has her eating schedule meticulously planned out from now until the championships.

“I am very fortunate to have guidance from a few great people,” she says. “This way, I do not have to stress over competition preparation.”

Though she admits to being more of a short-term goal setter than a long-term one, Balkwill hopes to use this year’s U SPORTS Championships as a positive stepping stone for what is to come.

“The ultimate goal right now is to make it to Tokyo for the 2020 Olympics,” she says. “But for now, I am just focusing on being consistent in my training and having fun while doing it. Being healthy and training in a great environment has made me love track again.”

Watch Balkwill run at the U SPORTS championships, Mar. 7-10 at the University of Windsor.

Alex is in his first year as a Master’s student at the University of Windsor, studying sport psychology. He completed his undergraduate degree at St. Francis Xavier University, where he began his varsity sports career as a cross country and track and field athlete for the StFX X-Men. Alex is an acting writer for Athletics New Brunswick and has a blog featured on the Canadian running website, Trackie.com.