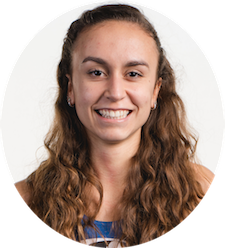 What attracted you to Université de Montréal?

First of all, I live on the south shore of Montreal, so it was close by. Also, the med school program at Université de Montréal is well-ranked. When I was accepted into the program, my mind was made up!

In terms of my choice as an athlete, it was a logical decision because I wanted to continue to train with my personal coach. The track and field program at Université de Montréal is still being developed, but I felt good about my decision.

I was recruited two years ago and I loved the dynamic that I saw here. It’s really like a big family! Even though I was a free agent athlete, I was given a warm welcome here and I still always feel supported and encouraged. I didn’t feel that atmosphere with other teams I visited. 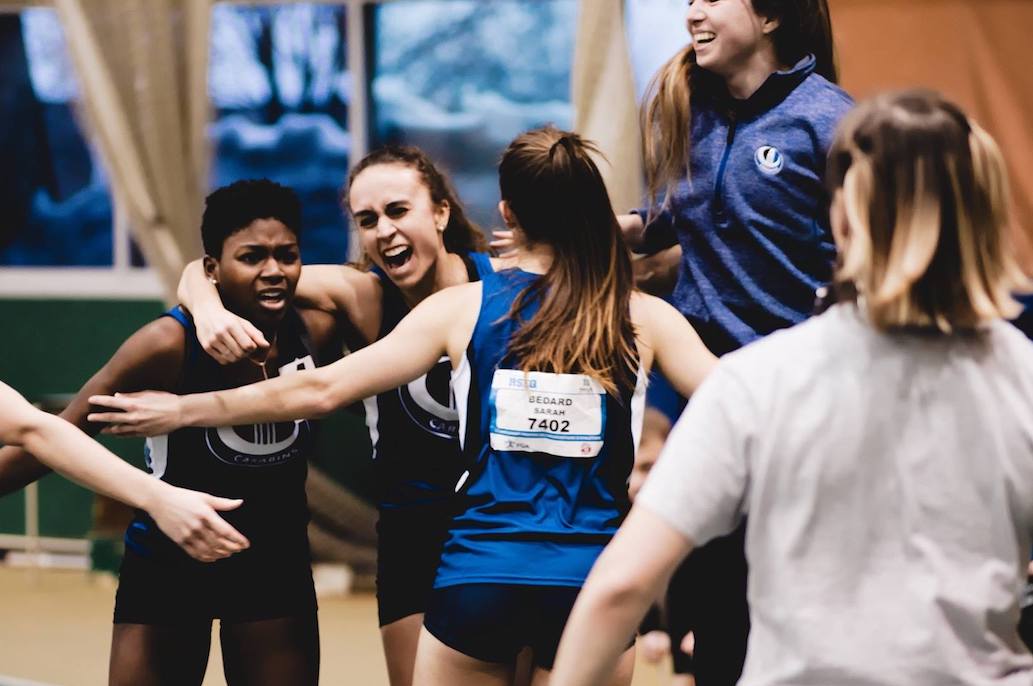 What’s your favourite memory, and your greatest athletic achievement as a U SPORTS student-athlete?

It’s hard to pick just one moment given how awesome this season was.

Qualifying for the U SPORTS championship was amazing.  Especially bringing my 4x200m relay team to the national championship. We’d wanted it since the beginning of the season, and accomplishing that goal while finishing first in Quebec was huge.

Earning four medals at the RSEQ championship was also a big win for me. The atmosphere there was exceptional.

At the U SPORTS banquet, when I was named Rookie of the Year, I was so surprised because I wasn’t expecting it at all! So many other rookies across Canada were excellent, so it was a real honour. 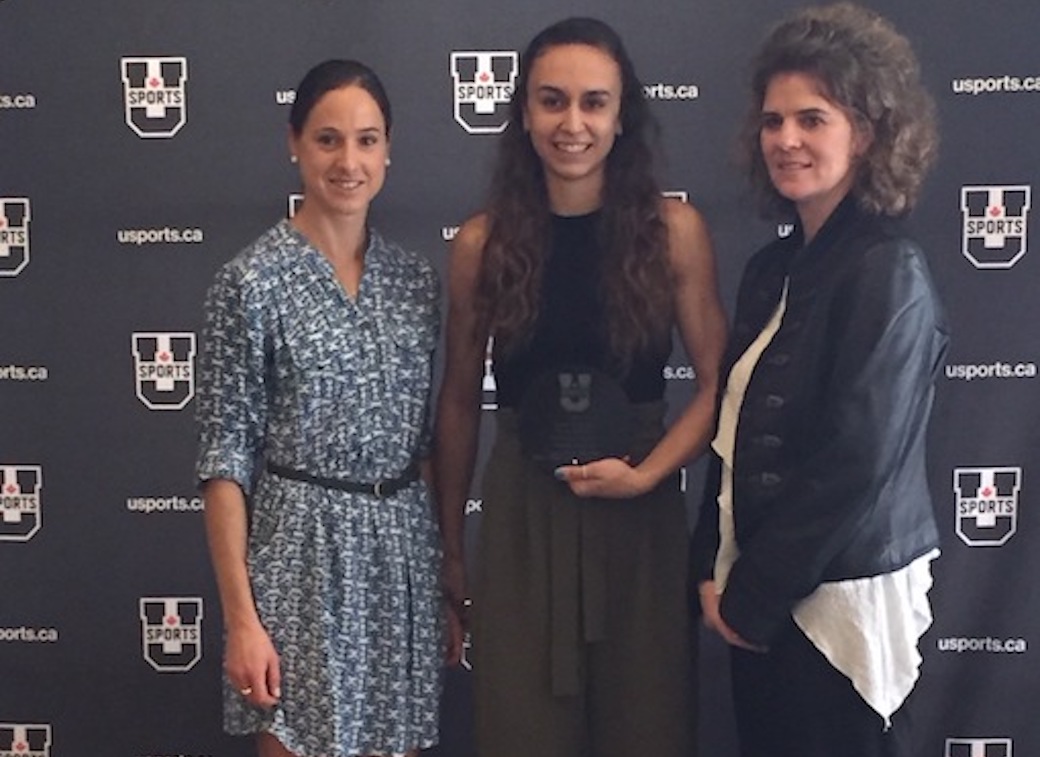 Where are your hoping your path will take you after university?

What I like about the Carabins is that the organization is really open. They agreed for me to work with my personal coach. The fact that I’m given so much freedom allows me to set bold but achievable goals. I would really like to compete at the 2024 Olympic Games because 2020 might be a bit soon.

It's a long process, but the coaching that we have here really allows me to continue believing while also performing in my studies. 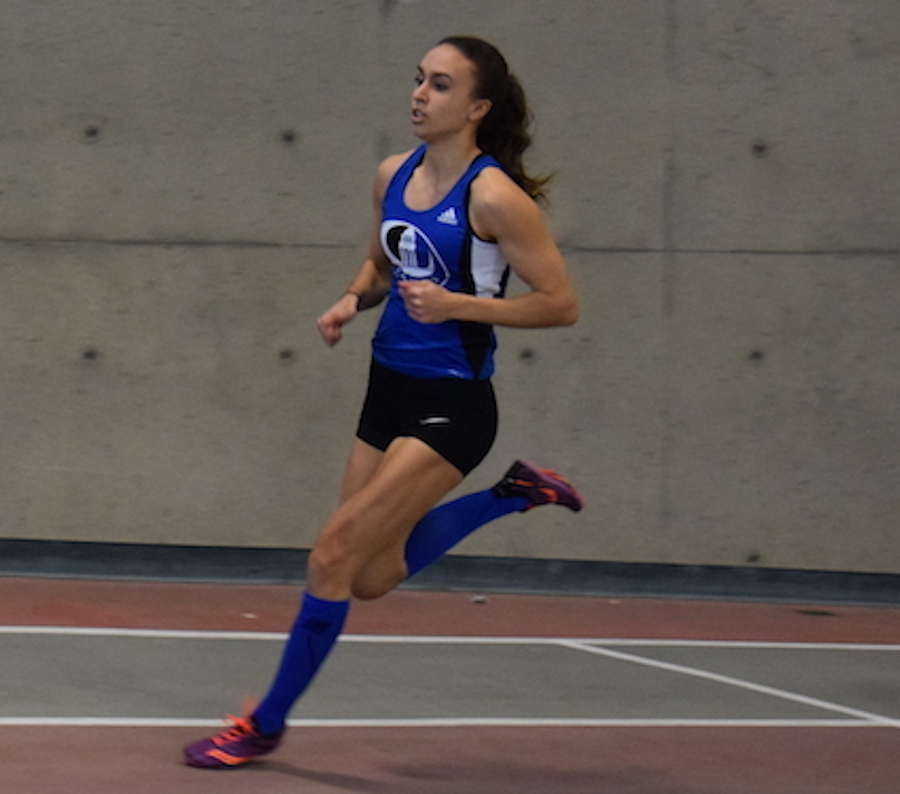 Who’s had the greatest influence on your athletic career?

Obviously my coach - Steve Morin! I’ve been working with him since I was 15 years old. He’s a gym teacher and he saw my talent and potential. He encouraged me to go try out for the school team, but he was with the city team.

The more I improved, the more obvious it became that I had to change coaches and I’ve been with him since then.

For him, school is the top priority. During my exam periods, he adapts to my needs. We really have a good relationship and we talk about everything. Basically, he’s a friend! We’ve built a strong relationship based on trust and we share the same values.

Who is someone in the sports world, past or present, with whom you’d love to have dinner with? Why?

Definitely Kimberly Hyacinthe. She’s a role model for me in sport, but psychologically as well. She has faced so many difficult events in her life and she’s always overcome them.

In addition to my sport, I’m in a tough program at school, and when I have little moments where I feel discouraged, I often think of her. She’s going through the same challenges as me, so I really look up to her!

What is your pre-game ritual? Do you have any superstitions/idiosyncrasies around preparing yourself for a game?

I often study (laughs)! Otherwise, I do a lot of visualization and breathing. I focus on specific goals to help me forget the final result.

I also wear compression socks for the 400-metre race even if I don’t need them! I've been wearing them for so long that they probably don’t even compress anymore. It's just a habit.

What’s your go-to song to get pumped up for practice or a game?

I listen to all types of music! Maybe not classical music because that might put me to sleep, but anything to get pumped up!

If you could try another sport, what would it be and why?

I’ve already played soccer, so I would start that up again! When I started really performing in track, I stopped because of the risk of injury, but I really liked soccer.

Otherwise, I would like to try volleyball. My brother plays and I often wonder how they do it! It’s very impressive.

What’s the most embarrassing thing that’s happened to you as an athlete?

At the U SPORTS Championship, I really fell hard in the 4x200 metre relay. I passed the baton off and then I fell. On the video, you can see me lying on the ground for a good minute. My boyfriend and Carabins head coach Éric Janvier came to get me and I was in rough shape.

Getting to know your U SPORTS coaches: Kate Bickle-Ferth, Waterloo Warriors