In Canadian country music circles, the name Kelsi Mayne is ringing a louder bell by the month.

Since being featured as an emerging artist on the Boots and Hearts Country Music Festival Main Stage in 2016, the rising star from Windsor, Ont., has been growing her legacy at a fine rate. Only a few years removed from being the showgirl at a Windsor country bar, Mayne has gained popularity that easily transcends her hometown’s boundaries.

Fans know her as a 2018 Country Music Association (CMA) Ontario Showcase finalist, and have watched her perform at Toronto’s Nathan Philips Square and Ottawa’s National Arts Centre. They savour her hit singles Still Not Over You and Your Jolene and they wait excitedly for Mayne to drop her first album in the spring of 2019, when she will tour Canada for the first time.

But what even Mayne’s closest fans might not know is that she impressed on the track long before she excelled on the stage. In fact, until Hockey Night in Canada host Ron MacLean introduced Mayne as a U SPORTS alumna at the 2018 Canada's Sports Hall of Fame induction ceremony - where Mayne performed her new single Takin’ U Home in October – most fans were unaware of her athletic background. Mayne, an elegant red-haired songstress who performs in a skirt and heeled boots, was a four-time U SPORTS national track and field champion with the Windsor Lancers between the years of 2009 and 2012. In her final year, she won the individual bronze medal in the 60m hurdles.

"We had an amazing group of talented people. Back then, I would just sing on the side.” says Mayne.

Mayne balanced her running with both her studies in nursing and a gig at the Bull and Barrel, a local country bar, where she was the house singer.

“I kind of kept quiet about the singing,” she says. “But the word got around that I was performing there a few times per week. Soon, teammates came to watch me. I remember being on stage and looking down and seeing (fellow Lancers alumna and two-time Olympian) Melissa Bishop staring up at me and cheering me on. Then our coaches started coming. It was a lot of fun – I had the support from my team the whole time.”

As Mayne kept performing, she received support from more people than just her teammates. 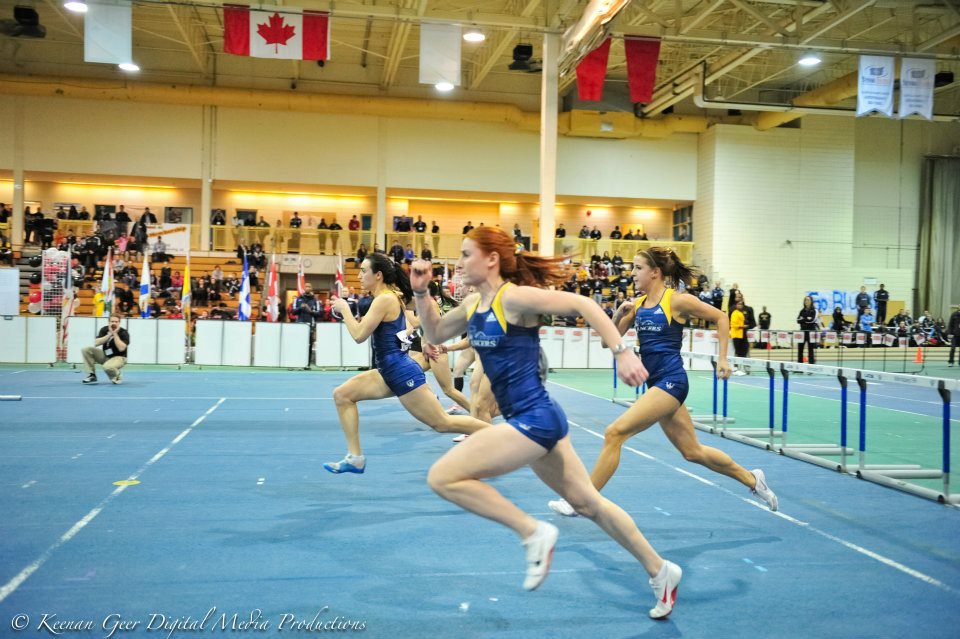 I started getting reactions from strangers and audience members at the Bull telling me ‘What are you doing here performing in Windsor? You need to go somewhere bigger.’ So one year after I graduated, I moved to Toronto to pursue music.

Now, nearly six years removed from her departure from the Bull and Barrel in 2013, Mayne has grown as a performer. She travels to Nashville for months at a time to write music, dabbles in acting and modelling, and has appeared on the same bills and stages as country music megastars Florida Georgia Line, Billy Currington and Blake Shelton.

But what people often forget when they see her name on a star-studded singing lineup – like they used to do when reading the results sheet of a 60m hurdles race – are the barriers that existed between her and her goal.

“Things were hard when I got to Toronto,” she remembers. “Music is one of the most expensive careers. Recording, travelling, marketing…every step of the way costs money. Plus, it is hard to break into the industry, so often you are paying out of your own pocket.”

What she lacked in funds, Mayne made up for in desire and hope.

“I had to be optimistic, and also naïve. I remember getting to Toronto and seeing (country music superstar) Miranda Lambert on a huge billboard for Boots and Hearts. I wanted to go watch, but the tickets were too expensive. I vowed to only go if I would one day be performing.”

It took three years of honing her craft, but by 2016 she was on the bill, performing as a Boots and Hearts Emerging Artist.

“Performing there was my goal when I had moved to Toronto, so it was a full circle moment.”

Her appearance there opened doors for Mayne, who then gained popularity by the year. She now performs at roughly 25 festivals annually, and intersperses those appearances with hundreds of television and radio features and singer-songwriter showcases. In the midst of her ascension, Mayne enjoyed another full circle moment when she returned to Windsor to produce a music video for her song Your Jolene at the Bull and Barrel in May 2018.

“It was a dream of mine to shoot there,” she says. “The plotline of the video is kind of like what happens on every Wednesday night at the Bull… maybe with some slight exaggerations,” she laughs.

Mayne now enters 2019 with wind in her sails.

“I hope that this year is the biggest one yet,” she says. “I am releasing my first album this spring and really touring Canada for the first time.”

When she reflects on what helped her find this level of success, Mayne is quick to acknowledge sponsors and her brother, who is a music producer. But, perhaps the main enabler of her rise has been her patience.

“I remember opening for (American country singer) Russell Dickerson back in Windsor nearly seven years ago,” says Mayne. “He was not a big name back then, but he was already singing the songs that made him famous just lately. You have to believe in your music – sometimes it takes time.”

Patience is a virtue that Mayne developed as a varsity athlete, honing her talents for five years before standing on the track and field podium as an individual. Even following her medal-winning race, she was forced to wait agonizing minutes.

“Nationals were in Winnipeg in 2012, my last year, and the results were slow to appear on the board,” she says. “I finished my race, and knew that my teammate Amilia (Di Chiara) had won, but I had no idea where I had finished – it was too close.

“I walked away from the finish line because the wait was too much. Finally, one of my coaches, Jesse Dupuis, came up to me with a group of my friends, including my track co-captain Nicole Sassine and said ‘Kelsi, nice job stealing some points,’ before putting his fingers into a three. Immediately I was in disbelief. I balled my eyes out.”

Sassine, a lifelong friend of Mayne’s who represented Canada in the 4x400m at the 2015 World Championships in Beijing reminisces about that special day. 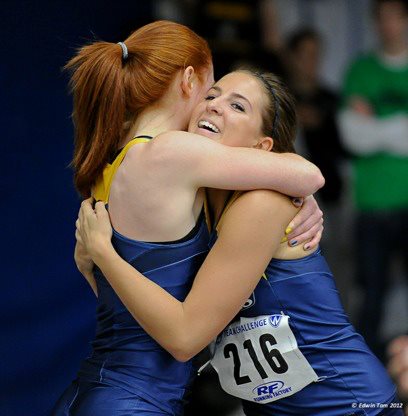 “I think the picture (above) says it all,” says Sassine. “I was a part of Kelsi’s track journey since high school, and I know how far she had come and how much work she put in to get there. It took a long time for her hard work to show, but she stuck with it.”

Sassine thinks Mayne’s willingness to take risks and to wait for what she wants brings her success in the performing arts like it did in track and field.

“Kelsi is extremely talented, but she knew success wasn’t going to come quickly or easily (in singing). Her patience is key.”

By the end of her varsity career, Mayne had attained all her running goals. In music, however, there is still much to be done. She hopes her patience allows her to check the elements remaining on her bucket list, which includes seeing one of her songs on the Billboard Top 50, and a performance at the Canadian Country Music Association Awards show (CCMAs). Mayne was also recently named a semifinalist in Sirius XM's Top of the Country contest, which will be decided via online voting in the spring.

“I don’t see myself walking away from music any time soon,” says Mayne. “I could decide to practice nursing full-time, but I can do that for the rest of my life. I approach my music with a now or never mentality – I do not want to live with the ‘What if’s.’ When I am committed to something, I am all in, and I am too stubborn to quit.”

Mayne’s new album will be available on all major music download services, including iTunes, Google Play, Tidal and Spotify. To find out about Mayne’s tour dates and appearances, visit kelsimayne.com.