It seems, these days, that nearly everyone has some sort of adventurous episode in their life.

Experiences could range from meaningful and challenging, to even painful. You’ll find all those words, and likely many more describing the scenarios, too.

Here’s one involving a superb student, both academic and athletic, who grew up in Prince Edward Island. Home for her is a small rural community known as Pownal, a 15-minute drive from Charlottetown.

As a youngster, Abbey MacLellan took an interest in a sport that has a history dating back to ancient Greece. It’s a game, played outdoors and usually with a wooden or fibreglass stick, that has a J-shaped hook at the bottom.

The ball is quite similar in size, to what you see in lacrosse. For field hockey, it’s made of durable solid plastic and, depending on the velocity from a shot, the ball can leave a player with cracked teeth and broken bones.

MacLellan started playing field hockey in junior high. Then got serious about the sport at Charlottetown Rural High School. Things clicked so well that Rookie of the Year honors were bestowed in grade 10. In 2015, her graduating year, she was selected as the school’s female Athlete of the Year.

Recruiting university coaches liked what they saw when MacLellan attended a scouting camp in the State of Massachusetts. It didn’t take long before staff at Northeastern University, a private and major educational institution in Boston, offered her a full scholarship.

With a post-secondary education paid for, having relatives in a city known for pro sports and events like the Marathon was all good – even the 10-hour drive from home.

MacLellan also had big dreams of making Canada’s National field hockey team. In her last year of high school, she had been on the Junior National squad.

From a historical perspective, Canada’s experience in women’s field hockey at the international level was, well, open for improvement. The Canucks were the runner-up at the 1983 World Cup. In 1984, missed the medals with a fifth-place spot at the 1984 Olympic Games. In 1986, Canada did win a bronze medal at the World Cup.

Since then, it’s only been a silver medal at the 2019 Pan American Games and second at the International Hockey Federation (FIH) series that same year. MacLellan was determined, focused, and worked hard.

“I was about midway through my first year at Northeastern, when I got cut from the Junior National team,” recalled MacLellan. “I was 18 years old, upset and I just knew I wasn’t ready to give up yet. With my family’s support, I decided to give up the scholarship and move to Vancouver.”

For MacLellan, being on a Canadian team that would be among the best in the world was the dream. When she became a student at the University of British Columbia, MacLellan found a way to combine courses in microbiology, physiology, and neurosciences. They would all lead to an integrated science degree. Playing field hockey for UBC would keep the fantasy alive of one day making the National team. 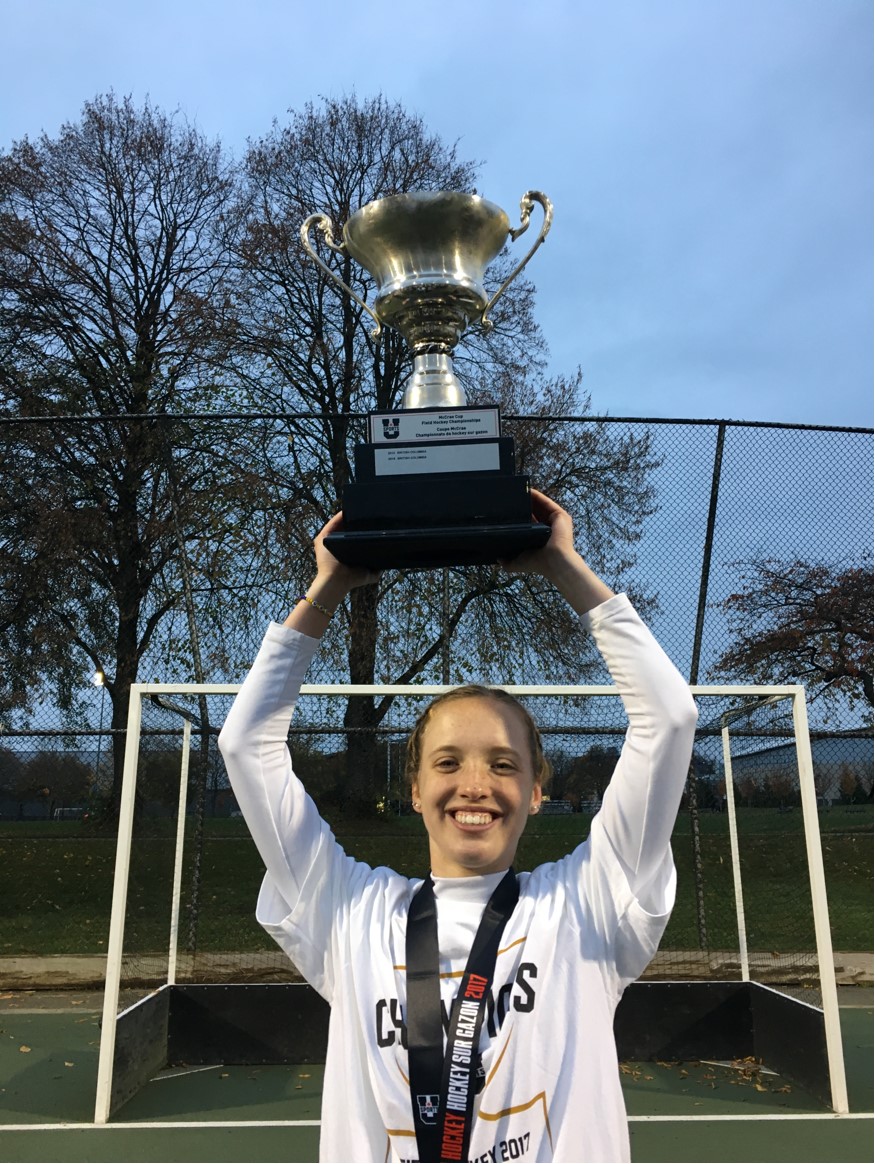 For a youngster, who had regularly practiced on a carpet in her family barn, focused on fitness and training, the urge to play for her country superseded everything else. It was that special to her. Reason for the barn? Turns out that Prince Edward Island did not have the kind of water turf facilities that blossomed in several other provinces.

Things were going well for MacLellan until, well, the accident. That would come in her Canadian university field hockey debut, that first game with the Thunderbirds – and her father was among the spectators.

“I remember being nervous that game, but scored a goal. Not long after that, I got hit in the face with the ball by an opposing player. It was awful.”

Carted off the field and taken by ambulance to the hospital, MacLellan had several broken bones and required facial reconstructive surgery with metal plates imbedded in her face. Lots of physiotherapy would follow along with psychological recovery. Her field hockey season was over, and MacLellan did think about the future.

“I was terrified, had worked so hard and wasn’t ready to retire,” she said. “Recovery was tough psychologically. Many times, I stepped on the field, I would have panic attacks.”

Things would improve over time and MacLellan, given medical permission to wear a plastic face mask, was given the green light to play in her third year of university. It was something she called the highlight of her field hockey career after contributing to the Thunderbirds gold medal USPORTS national championship.

In one of the playoff games, MacLellan was chosen Player of the Game. That same year, she was picked for the Senior National team tryouts, held at the UBC campus, but didn’t make the final squad.

With a personal journey going from serious injury to the elite medal podium, MacLellan was still optimistic. Fourth year, things collapsed. Her field hockey dream exploded. So did her days in contact sports.

“I took a ball to the head, but fortunately had the mask on or the damage could have been much worse,” said MacLellan, recalling the episode in a telephone conversation.

“It was my second concussion. At this stage, I had hopes of applying to medical school, I had just written my medical college admissions test (MCAT), I had a lot to lose. For most of that year, I was having constant headaches, trying to keep up in school while spending most of my time in bed. It was a real dark time for me emotionally and physically.”

MacLellan had played her last field hockey game, but there were pleasant memories. Canadian university sport (USPORTS) recognized her with an Academic All-Canadian in three consecutive years. She was also a CanWest First team Allstar and USPORTS named her comeback from year prior the comeback story of the year. She applied to medical school and completed her last year at UBC. One chapter closed, another about to start.

A year later, she was excited about being accepted to medical school at Dalhousie University in Halifax – and much closer to her home. A career path of medicine inspired in part by her plastic surgeon.

“While it was debilitating and devastating to decide that contact sports were never going to happen again, I had to be realistic about my life,” she said. “I decided to focus academically, and I needed my brain cells for med school.”

After graduating from UBC, MacLellan had her first year of studies at Dalhousie on-line because on-campus classes were cancelled due to the pandemic. Back in high school, MacLellan won the cross-country individual provincial championship. She had also competed at a Canada Summer Games in track. 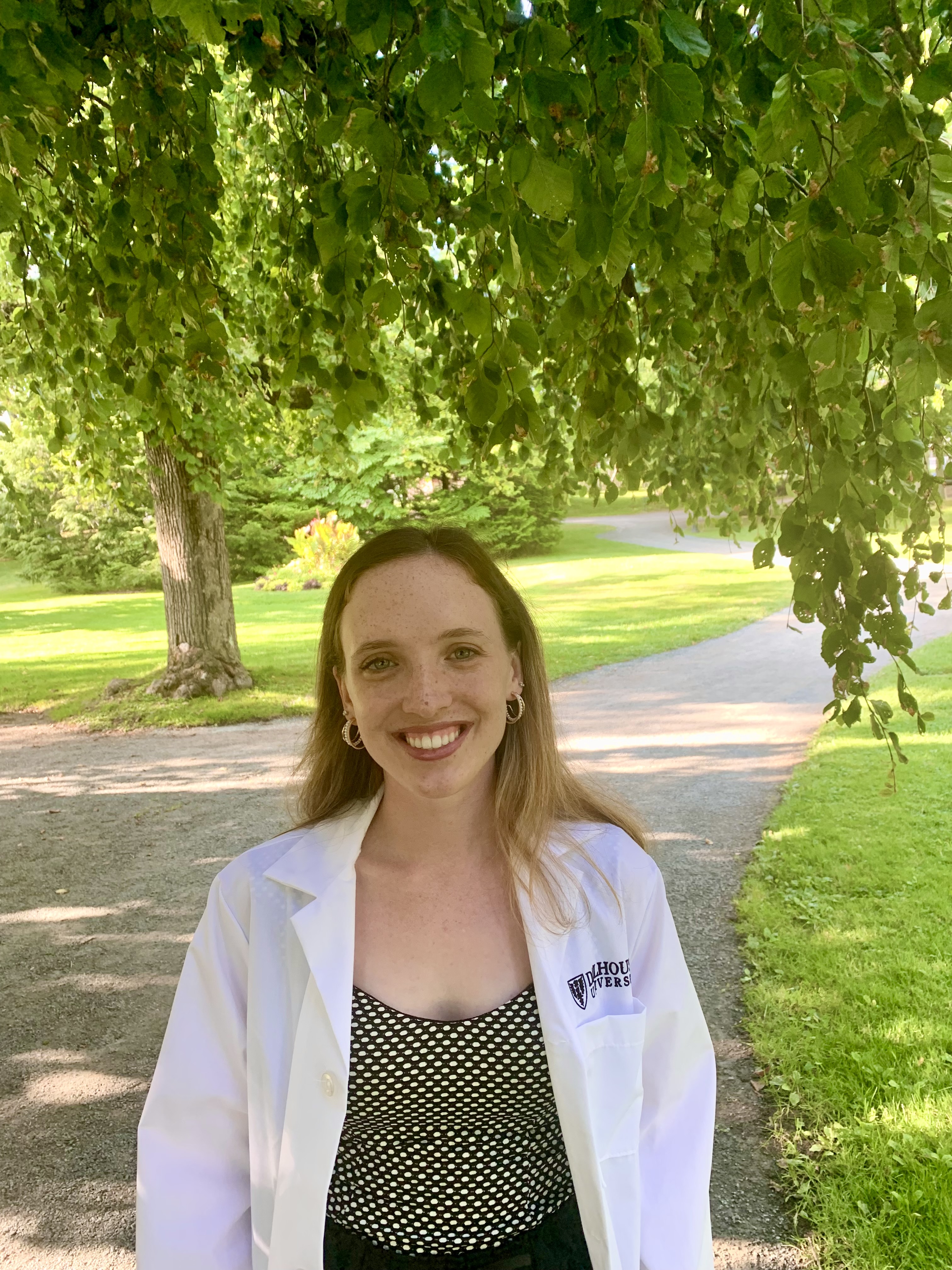 MacLellan figured that a daily run would be a break from studies. It would also become a new chapter in her sports life and so she consulted her former high school coaches. In the summer of 2021, she was actively involved in training with them to try out for the fall term.

“I decided trying out for the Dalhousie team was a way for me to re-write an unfortunate previous ending of my sports career,” she said. “Little did I know, the tryout would be a new beginning. But the training in a new sport, was a learning curve. I remember the joy of being on the (cross country) team that won a silver medal at the AUS competition in Moncton.”

She had used her momentum gained in distance running, to earn a spot on the Dalhousie track and field team roster.

At the Atlantic University Sport (AUS) indoor track and field competitions, MacLellan – competing in the 600 metres for only the second time in her life – just missed out on a trip to the medal podium, placing fourth in the race. But she earned a silver as a member of the Dalhousie 4 x 400-metres relay team.

MacLellan is among the small contingent of Canadian student-athletes who can say they won medals in three varsity sports, while attending different universities.

Tim Maloney, Executive Director of Athletics and Recreation at Dalhousie, said MacLellan exemplifies everything that the university stands for in academic and athletic success.

“Academic excellence, and she’s in medical school, great athletes and people who contribute in many ways to the community. She’s got it all and extremely dedicated. We, and so many others, are aware of her accomplishments. Just a superb role model.”

While Canadian universities are notorious for building better people, MacLellan is a recipient of the AUS Female Community Service Award. Other than studies and sports, she’s done a few other things very well, including neo-natal heart research of premature babies, and writing an E-book for patients with disabilities.

One more thing we can’t overlook, her continued connection to give back to the field hockey community that made her original dreams possible. She stages summer field hockey clinics for athletes on the Canadian island known for the birthplace of Confederation.

David Grossman is a veteran multi award-winning Journalist and Broadcaster with some of Canada’s major media, including the Toronto Star and SPORTSNET 590 THE FAN, and a Public Relations professional for 45+ years in Canadian sports and Government relations.