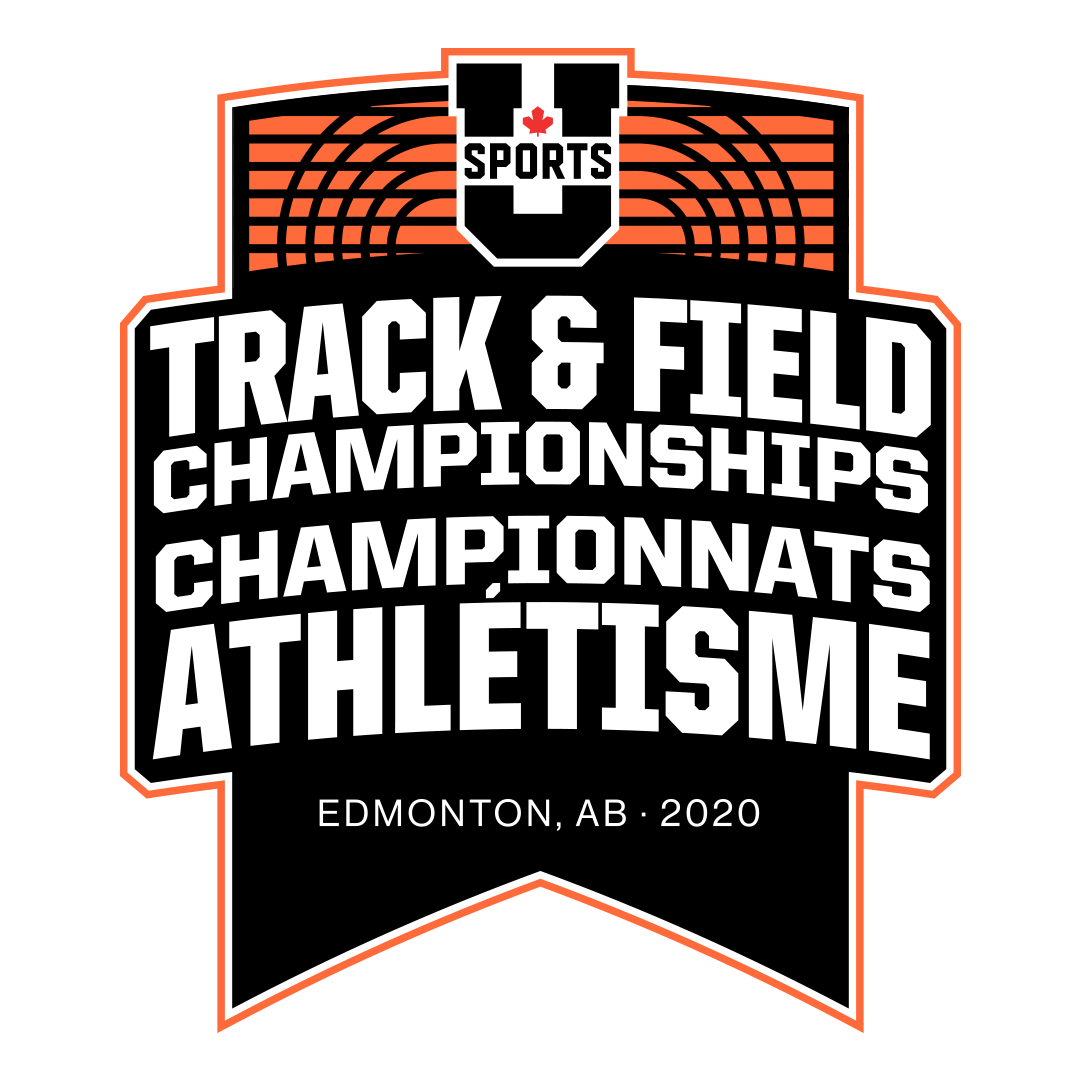 The Guelph Gryphons look to defend their men’s and women’s titles and capture a third straight sweep in the process when the 2020 U SPORTS Track and Field Championships open on Thursday in Edmonton.

The Gryphons, who already took home both OUA titles for the fourth straight campaign, are targeting their seventh men’s and fifth women’s national banners in program history, all of which have come since 2008.

Fresh off a fifth-place men’s and bronze-medal winning women’s finish at the CW Championships two weeks ago, the Alberta Golden Bears and Pandas host this year’s event for the second time in four years and sixth in program history at the Van Vliet Complex in Edmonton 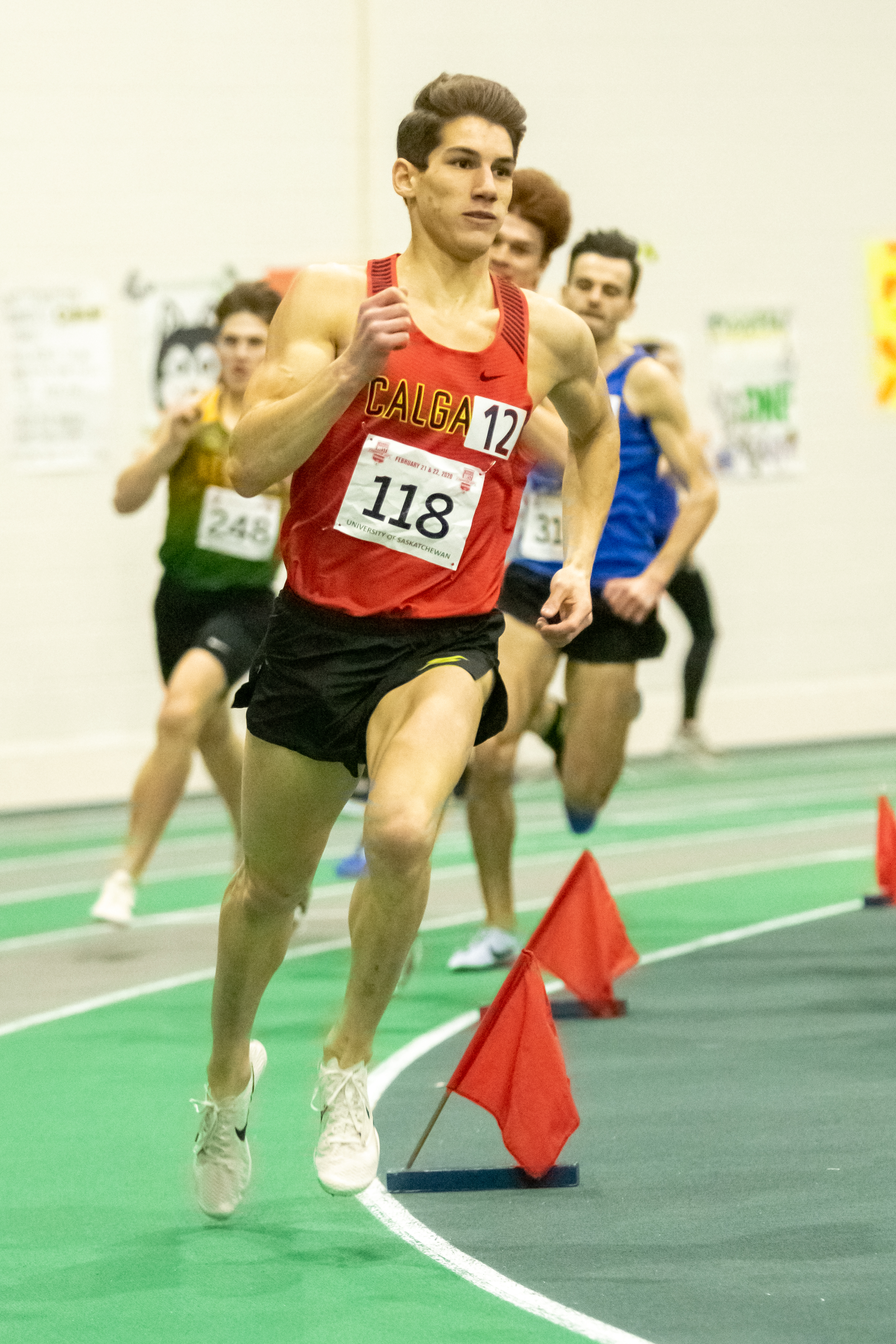 The Dinos men earned seven gold medals at the CW Championships en route to a fifth conference title in program history and their first since 2014-15. Leading throughout a vast majority of the meet, the Dinos had to hold off a late push from the Saskatchewan Huskies. Through 14 events the Huskies held a 111-110 advantage, before Calgary rounded out the meet by placing first and third in the 1500-metre race to retake the lead for good.

A large part of Calgary’s success was the efforts of third-year runner Eric Lutz, who finished first in the 1000-, 1500- and 4x800-metre relay. After Saskatchewan in second with 122 points, the Trinity Western Spartans (101), Manitoba Bisons (86) and Alberta Golden Bears (78) rounded out the top five. 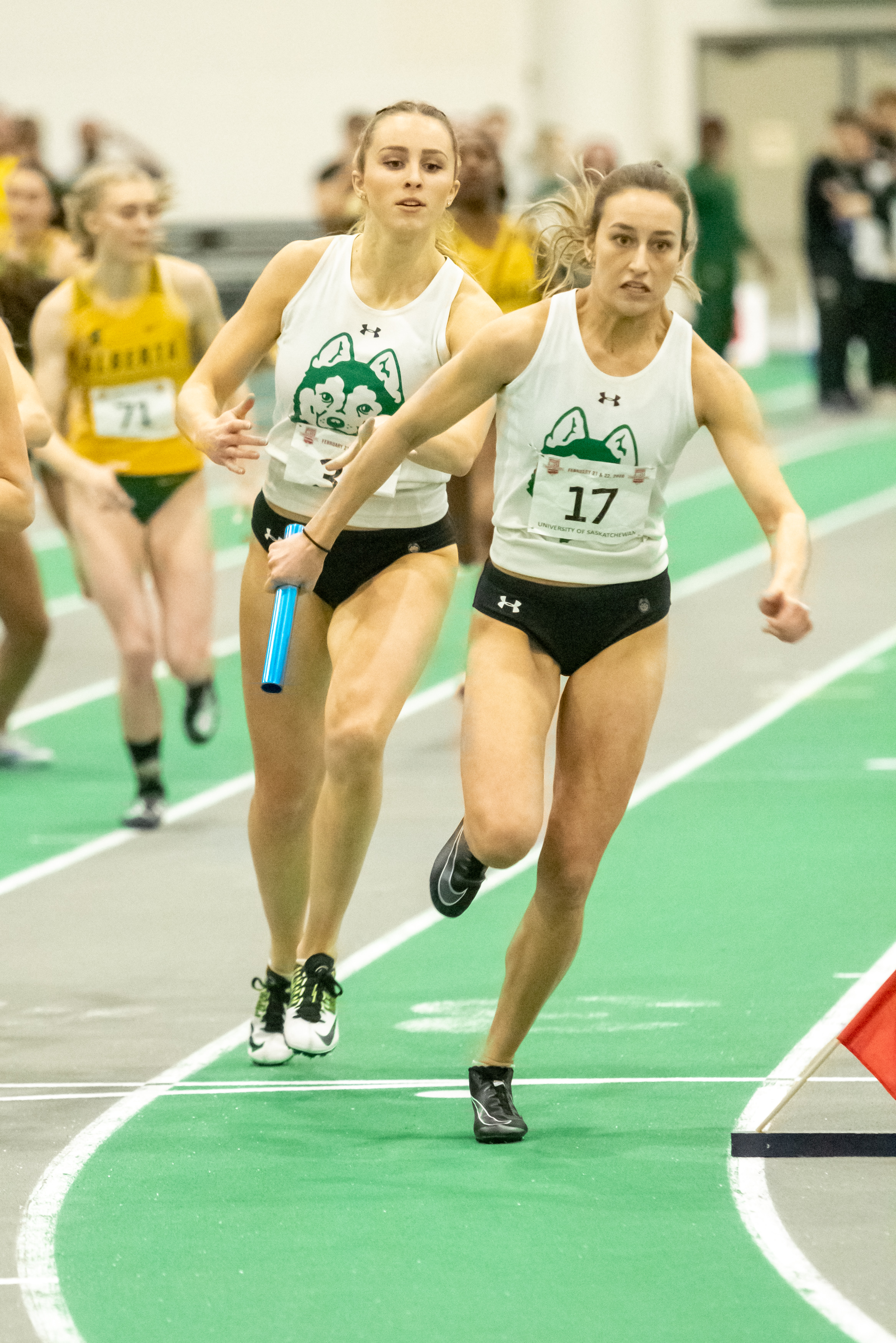 For the third year in a row and 21st time in team history, the Saskatchewan Huskies women's track and field team claimed Canada West gold as they led wire-to-wire at the conference championships on home turf.

Claiming 10 medals, five of which were gold, the Huskies accrued 142.5 points and shattered a pair of Canada West Championship records with both Michelle Harrison in the 60-metre hurdles and the 4x200-metre relay of team of Harrison, Ashlyn Mooney, Leadan Chartier  and Kendra Farmer  setting new conference marks. Harrison was named the Female Track Athlete of the Year and Female Outstanding Performance of the Meet.

Behind Saskatchewan in the women's table were the Calgary Dinos with 128 points. The Alberta Pandas (122), Regina Cougars (89) and Manitoba Bisons (51) also finished in the top five. 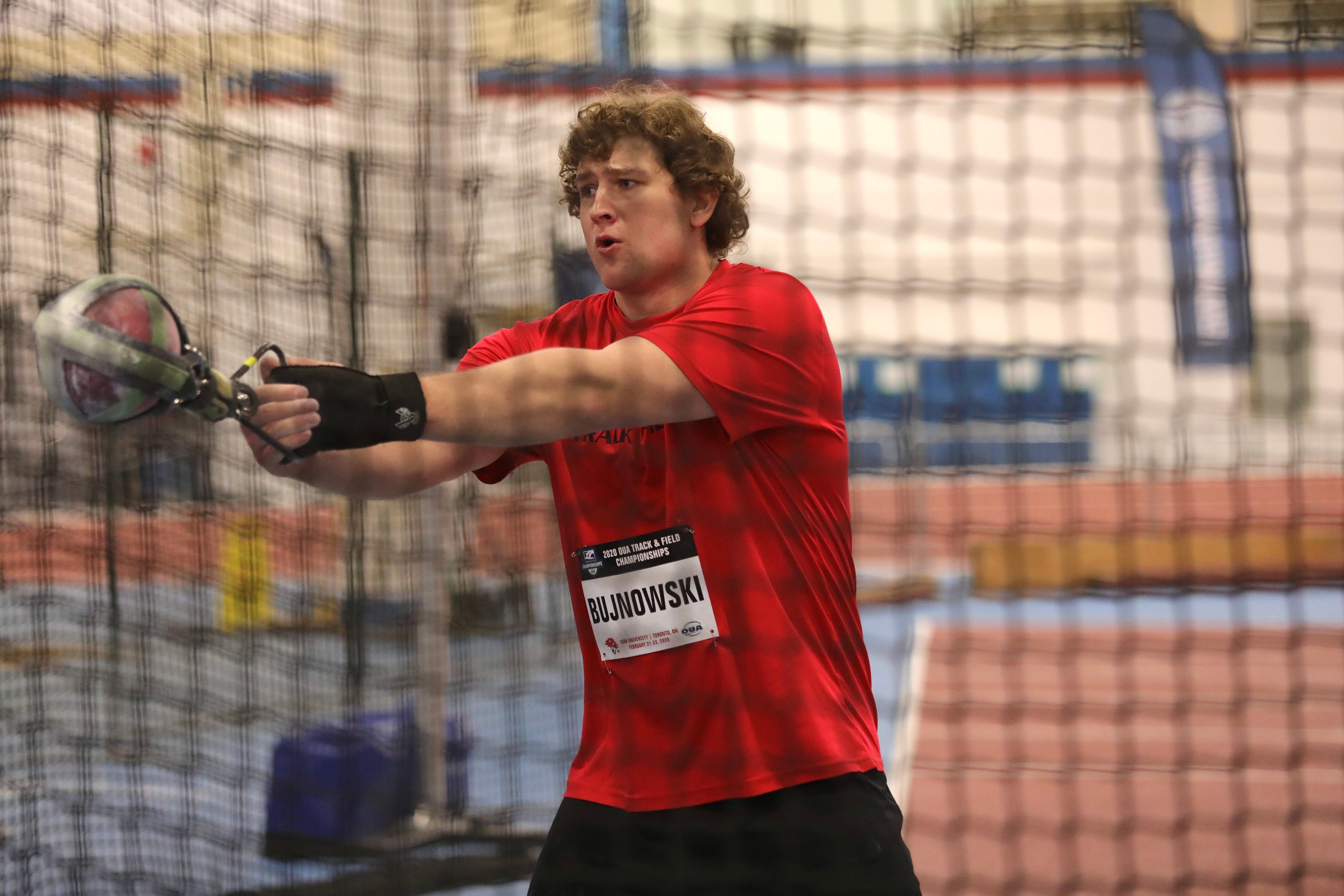 Coming up with 37 podium finishes, both the No. 1 nationally-ranked Gryphons men's and women's teams showed zero signs of slowing down en route to the women winning their fifth straight OUA title and the men coming away with their fourth in a row.

With headline performances from the likes of OUA Female Track MVP and Top 8 Academic All-Canadian Zoe Sherar, along with OUA Male Field MVP Mark Bujnowski leading the way for the Gryphons, the team as a whole was able to claim their fourth straight banner season sweep, topping both the women’s and men’s field.

The team got themselves off and running through day one with a sizeable cushion across both standings – thanks in large part to nine gold medals in the opening events – and cruised to the finish line from there with another nine first-place results on day two. All told, the Gryphons had 37 total podium finishes and multiple new OUA records. 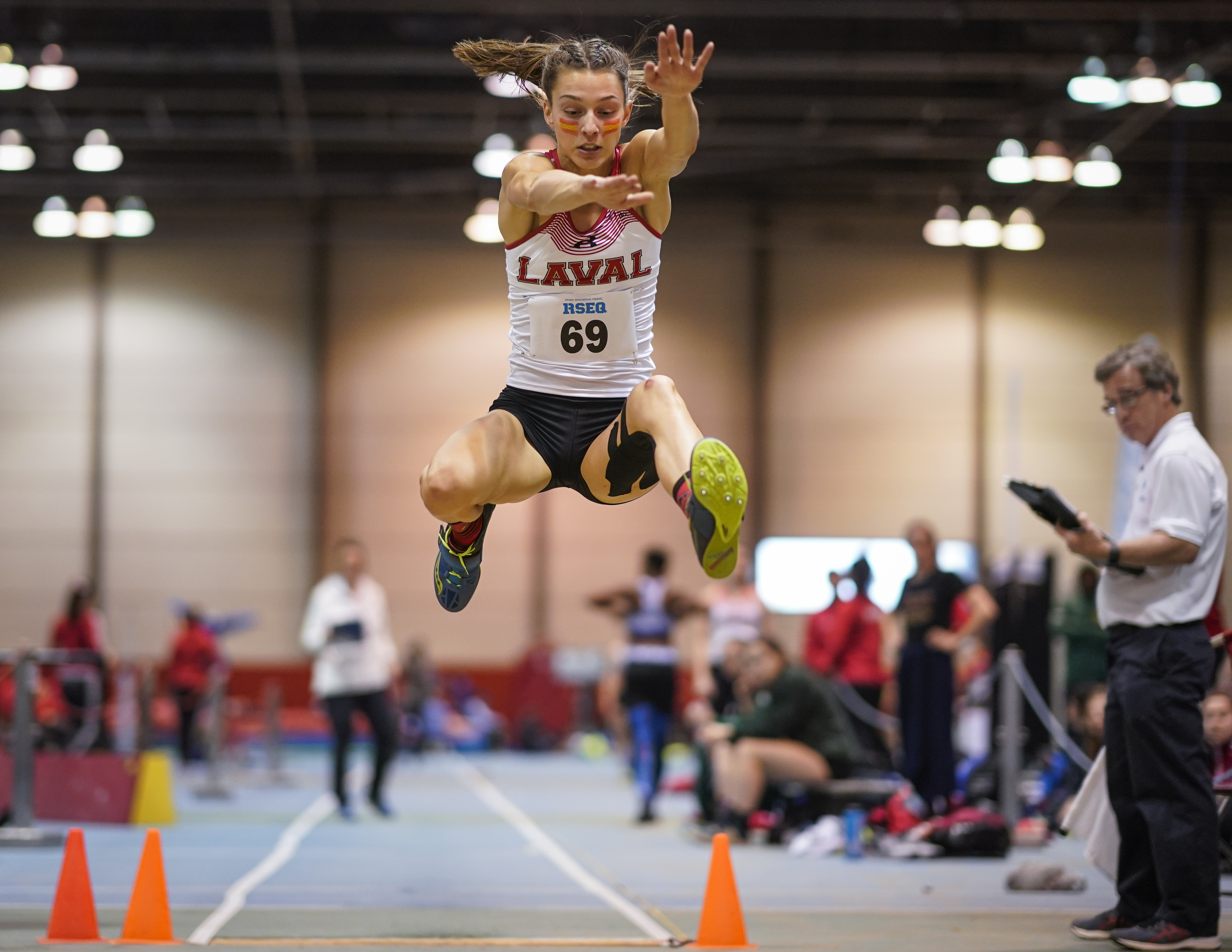 Under the guidance of Sylvain Cloutier, who replaced Joël Bourgeois this year, the Laval Rouge et Or once again dominated the RSEQ in 2019-20. The men’s team won their seventh consecutive banner, while the women’s squad captured their third title in a row.

Ranked fourth in the country, the women’s team eyes a first national podium in their history after a fourth-place finish in 2019. On the track, medal candidates include Athlete of the Meet Jessy Lacourse, Catherine Beauchemin and Rookie of the Year Audrey Leduc. On the field, Noemie Jeffrey (weight throw) and Ivonne Coulibaly (shot put) are strong candidates for a gold medal.

On the men’s side, the No. 4 Rouge et Or will try to return the podium after a disappointing seventh-place last year. Named RSEQ Track Athlete of the Year, Jean-Simon Desgagnés won the 3000m with a spectacular 7:53.21 (more than 10 seconds faster than his closest competitor), while David Gendreau-Fillion (1000m) was named Athlete of the Meet  after earning four medals of his own (3 gold, 1 bronze). On the field, Joey Lussier (weight throw) is the only athlete with a throw over 18 metres in the country this season (18.55m).

Maya Reynolds also had a great meet, winning the 60m in a new AUS championship record time and picking up a second gold in the 300m event.

One the men’s side, the Tigers claimed their 18th conference championship in the last 19 years, and sixth consecutive title. Leading the way was runner Hudson Grimshaw-Surette who captured four gold medals –a pair in the 800m and 1000m events and two more as a member of the men’s 4x400m and 4x800m relay teams. He set a new AUS championship record in the 1000m race. He was named the AUS championship MVP and the AUS track athlete of the year. Matthew Coolen won both the 60m and the 60m hurdles, earning a new AUS record in the process, while also helping the 4x200m relay team to a first-place finish.

UNB's Michah Hesman was the championship's AUS Athlete of the Meet. . He captured gold medals in the men's heptathlon as well as the men's pole vault and a bronze in the men's 60m hurdles.