Sports in the Canada West Conference continue as Eric Lutz of the Calgary Dinos and Kaitlyn Harrison of the Saskatchewan Huskies ran to gold in their respective races in track and field.

In volleyball, Trinity Western’s Brodie Hofer and Alberta’s Julia Zonneveld excelled. In hoops, Mason Bourcier of Trinity Western and Jessica Haenni of Lethbridge were unstoppable in basketball while Alberta’s Noah Philp and Saskatchewan’s Camryn Drever were outstanding in hockey.

Due to the COVID-related restrictions across Canada, U SPORTS is spotlighting the Canada West athletes that would have otherwise been in the running for the U SPORTS Athlete of the Week for the period ending January 23, 2022. 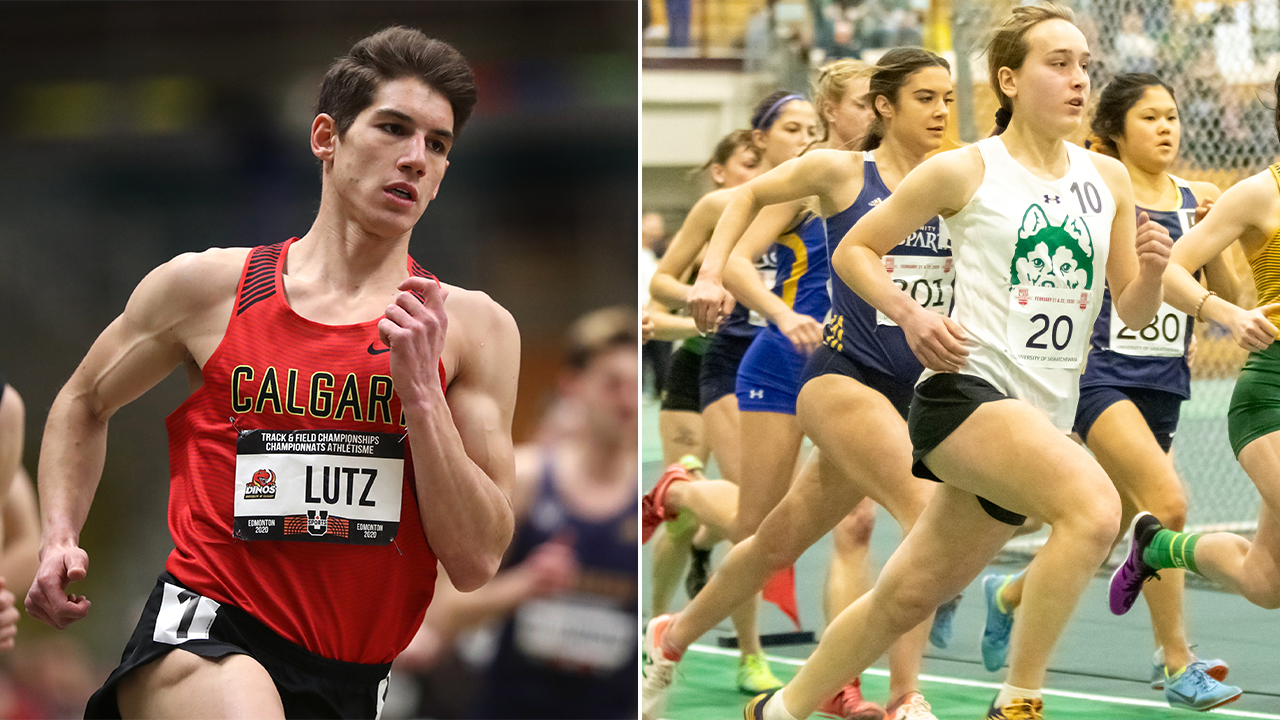 Eric Lutz placed first among all male track and field athletes at the 49th Annual Golden Bear Open (GBO) over the weekend with 20 points.

The reigning 1000m and 1500m U SPORTS champion earned 20 points for first place finishes in those races this weekend. In the shorter of the races, the fourth-year track star was less than half a second from beating a 38-year-old GBO record (set in 1984 by UBC’s Simon Hoogwerf). He also chased down Calgary alumni Scott Jensen’s provincial indoor record, setting a time just .79 seconds off Jensen’s mark.

The distance runner had the GBO Open record within his sights in the 1500m event as well, crossing the line in just 3:50.57. That was a full three seconds ahead of his closest competitor, and .45 seconds off the meet record set by University of Victoria’s Doug Beckman back in 1979.

Kaitlyn Harrison finished tied for first among female track and field athletes at the 49th Annual Golden Bear Open over the weekend with 20 points.

Harrison cruised to gold in both the 3000m and 1500m races, helping the  Saskatchewan Huskies capture the meet's team title on the women's side.

This weekend is the latest success for the Lumsden product, who placed fifth at both the CW Cross Country Championships and U SPORTS National Championships in the fall, earning first-team all-Canadian honours. Brodie Hofer put away 39 kills to remain undefeated and solidify the Spartans' place atop the West division.

On Friday, the third-year hitter buried 22 kills on 42 swings (.357) as the Spartans fought back to claim the match after dropping sets three and four. Hofer took charge in crunch time, notching two kills late in the fifth to keep his team undefeated.

The versatile Zonneveld was all over the hard court, hitting the deck for 31 digs over the weekend while laying down 21 kills as Alberta continued its trampling of the Central division.

Zonneveld, an outside hitter, put up top libero-grade numbers, while showing strong defence at the net as well.

On Friday, she posted 15 digs, nine kills, one block assist, and 9.5 points in what was a hometown affair for the Calgary product. The fourth-year player came back Saturday with 16 digs, 12 kills, one ace, four blocks and 15.5 points as the Pandas defeated the University of Calgary Dinos twice in straight sets (3-0, 3-0). Bourcier accomplished a rare feat, posting just the 18th triple-double CW has seen since 2000. Then, if that wasn't enough, he went and did it again the next day.

It took the fourth-year guard just one weekend to put himself second on the CW career triple-double list (dating back to 2000). He now sits only behind Winnipeg's Erfan Nasajpour, who had four over his five-year career.

Bourcier captured each triple-double in convincing fashion, putting up 15 points, 12 rebounds, and 13 assists Friday to push TWU past the higher-ranked University of the Fraser Valley Cascades, 97-87.

He went back to work Saturday with 16 points, 12 rebounds, and 12 assists, adding assurance markers in each category. He created opportunities for the Spartans to surmount a UFV lead in the fourth quarter, before TWU ultimately fell to the Cascades, 102-88.

The Kelowna, B.C. product chipped in six steals over the weekend's games, affirming his talents on every side of the ball.

On the women’s side, Lethbridge’s Jessica Haenni also stuffed the stat sheet. The versatile guard impressed from the three-point line, going five-for-11 Friday night to lift the Pronghorns past Mount Royal University, 88-72.

The fourth-year guard put up 37 points in a key weekend sweep for the Pronghorns, while shooting 43 percent from behind the arc. Noah Philp led the Alberta Golden Bears past the Saskatchewan Huskies right to the top of the conference standings. The second-year forward notched three goals in his first two games of the season in a momentous sweep on the road over the weekend.

Philp opened the weekend scoring late in the first period on Friday, breaking into the offensive zone before crashing the net for a rebound marker. Philp also went on to score the game-winner.

On Saturday, Philp exploded out of the defensive zone on a partial break, sniping one up and past the glove of Huskies' goaltender Roddy Ross. That insurance goal came 25 seconds after a goal by teammate Gary Haden.

The Golden Bears' two wins this weekend shot them up the standings, where they now rank first in Canada West.

Drever was nearly flawless over two games this weekend after allowing one goal late in the first period Friday. The Saskatchewan netminder led the Huskies to a hard-fought overtime win Friday, stopping 19 of 20 shots.

The third-year goaltender remained dominant on Saturday, turning away all 33 shots en route to a shutout victory and a weekend sweep of the Alberta Pandas.

Over the two games, Drever posted a remarkable .981 save percentage and a 0.50 goals against average. Drever went seven straight periods (including two overtimes) without allowing a single goal.