TORONTO – Meg Casault, a fifth-year left-side hitter from the Alberta Pandas, was named the U SPORTS Player of the Year in women’s volleyball, Thursday night.

A Physical Education & Recreation student from Edmonton, Casault is the first recipient of the Mary Lyons Award from the Pandas since Tiffany Dodds in the 2006-2007 season. That was the very same year that the Pandas would claim their fifth and most recent national women’s volleyball title.

The 2017 U SPORTS Women’s Volleyball Championship Presented By Jason Rinaldi, hosted for the first time by Ryerson University at the Mattamy Athletic Centre in downtown Toronto, kicks off Friday and culminates Sunday with the gold medal final at 4 p.m. ET. All matches from the eight-team competition will be webcast live on USPORTS.LIVE.

Fifth-year University of Alberta Pandas outside hitter Meg Casault has been awarded the Mary Lyons Award as  U SPORTS Women's volleyball Player of the Year.

Casault is the first Panda to win the Player of the Year award since Tiffany Dodds accomplished the feat in 2007, which was also the last time the Pandas won the national championship.

The Edmonton, Alta., native recorded 327 kills in her final year with the Pandas, breaking the all-time Canada West kills record earlier this season with her 1,255th career kill. Her milestone broke an 11-year old conference record which was set by Pandas alumni, and former team MVP Tawana McLeod (nee Wardlaw), ending her career with 1,321 kills to her name.

Casault's 327 kills and 3.94 kills per set were also the six-highest in the nation. The Physical Education and Recreation student also recorded 193 digs and 28 aces this year.

"Meg is an extremely deserving recipient of the Player of the Year Award,” said Alberta head coach Laurie Eisler. “Since her first year with the team she has shown a remarkable improvement in every aspect of the game due to her humility and commitment to continuous improvement.  She is not only a leader on the court but serves as one of our team captains, and is an inspiration to all of us who have had the pleasure and honour to work with her."

The other nominees were Marie-Alex Bélanger of Montréal, Alina Dormann of Toronto, and Jill Snow of Memorial. 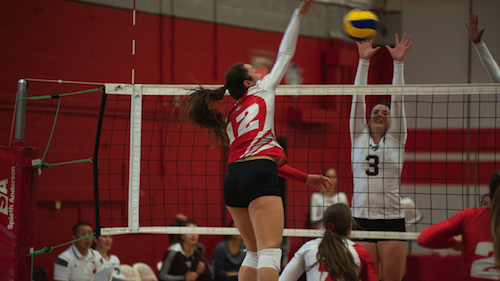 Claire Vercheval, a 6-foot-2 power-hitter with the McGill Martlets, was voted the as the RSEQ’s top rookie and became the first McGill freshman since 2006 to earn all-conference honours. The 21-year-old physical education major from Ste. Julie, Que., started in all 20 games and ranked fourth among league leaders in both points per set (3.33) and kills (2.84) per set

“After adjusting to the speed of the game at the university level in the first semester, Claire improved significantly as the season wore on and became one of our main hitters,” said McGill head coach Rachele Beliveau. “She achieved an outstanding kills-per-game average for a first-year player. As she gains experience and maturity, she has the potential to become a dominant court leader.”

The other nominees were Kearley Abbott of Manitoba, Melissa Langegger of Western, and Kristen Burns of UNB. 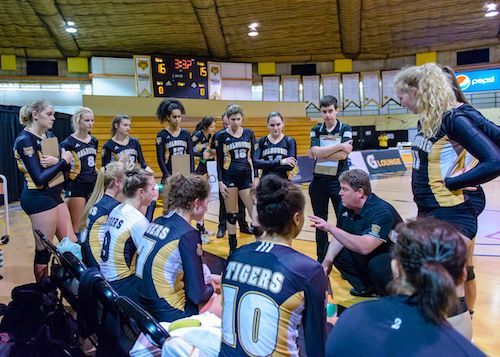 Currently in his ninth season as head coach of the Tigers, Rick Scott has done an outstanding job developing his players and the program, winning five consecutive AUS championships. He brings great passion and energy to the team and an impressive history of success. A three-time AUS coach of the year (2013, 2015 & 2017), Scott was named the Dalhousie University coach of the year for two straight seasons (2012-13 & 2013-14).

Under his leadership, the Tigers finished with a 19-1 regular season record and a first-place finish in the AUS standings, before going 2-0 to win their fifth consecutive conference championship.

Dalhousie’s .187 hitting percentage was the best in the Atlantic conference. The Tigers also led in the AUS in digs, averaging 18.87 per set. Their 11.35 kills per set, 11.20 assists per set, 2.03 blocks per set and 15.3 points per set were all the second highest in the league.

“Rick has had an incredible impact on our women’s volleyball program and the sport of volleyball in our region,” said Dalhousie athletics director Tim Maloney. “His leadership and tireless effort have provided a tremendous platform for our program to succeed.  We are fortunate to have Rick as part of our Tiger family.”

The other nominees were Olivier Trudel of Montréal, Laurie Eisler of Alberta, and Kristine Drackich of Toronto.

Myriam Robitaille, a six-foot middle blocker with the McGill Martlets, was second on the team in points (3.23), kills (2.15) per set while leading the squad in aces (0.40) per set. The 22-year-old junior from Terrebonne, Que., is majoring in languages and French literature. She represents the team on the McGill Varsity Council, in addition to volunteering for the Défi Canderel, a corporate fundraiser for cancer research. She has also served with Head & Hands, an organization committed to the physical and mental health for youths. Robitaille volunteers her time as a translator with "Rock Camp for Girls", an organization that encourages learning and making music through empowerment and community building. Robitaille also served on the executive of a Sustainability Research Symposium at McGill, an annual workshop aimed at making the university a greener campus from an environmental, social, economic perspective.

“Myriam is our captain and brings great leadership, both on and off the court,” said Beliveau. “Intensity and drive are among her many great qualities. In addition to countless hours spent in the gym, she somehow finds extra time to get involved in many cultural projects and really enjoys it. Her energy and positive attitude is truly contagious and she demonstrates that every time she steps onto the court.”

The other nominees were Robyn Potolicki of Mount Royal, Rachelle Lemoine of Moncton, and Madelyn Mandryk of Toronto.