For a second straight year, the Ryerson Rams took away the golden dreams of the Alberta Pandas.

Last year, in the national championship final, Ryerson prevailed for their first national championship in school history, and now they’ll get a chance to repeat as they beat Alberta on their home court in straight sets (25-21, 28-26, 25-23) on Saturday night at the Saville Community Sports Centre.

The game may have ended in a sweep, but this had all the makings of being a five-set classic matchup. Neither team made many mistakes, but the ones Alberta made were at critical times and it hurt the Pandas immensely.

“The second set was where they were in control of the momentum throughout, but we fought hard to stay close. Being able to hold on and get the win there really gave us a boost in the third, but we really had to hold on there too,” said Rams head coach Dustin Reid. 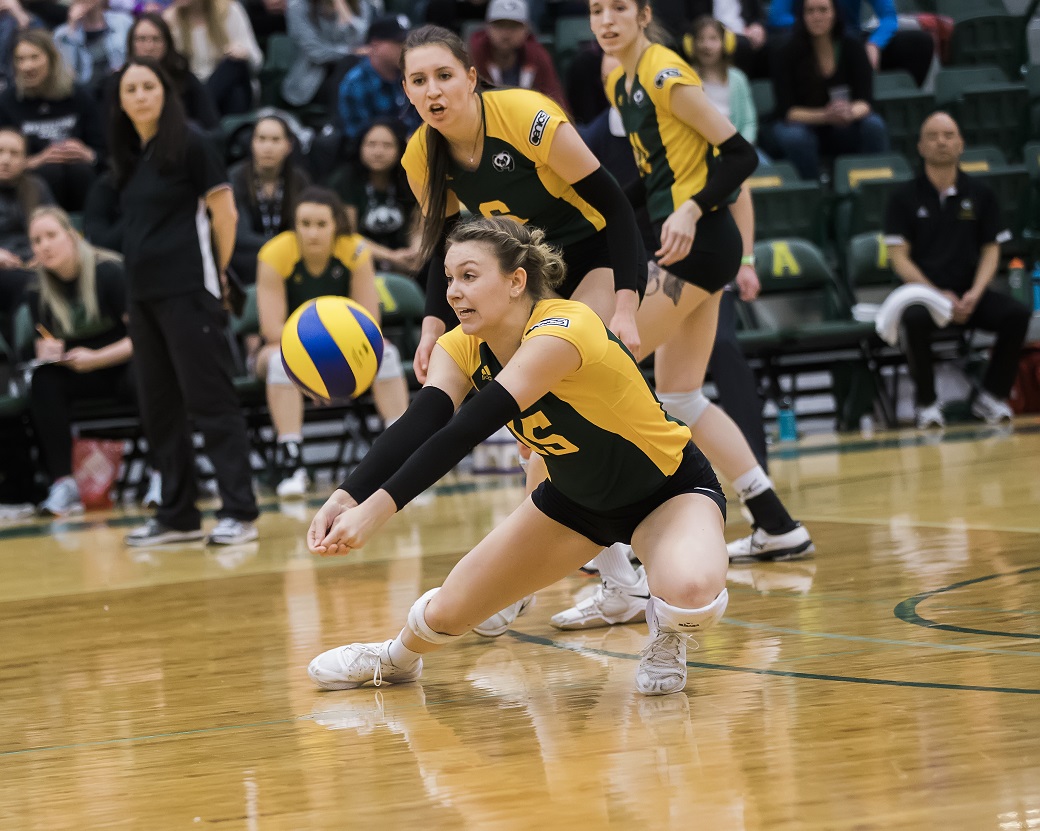 “We know the way Alberta plays and the quality they play tactically. We just don’t see that type of quality and they execute so well. If we played 50 sets, it would be 25 all. The fact we played three tonight is an aberration.”

After a shaky opening set loss, Alberta looked in full control in the second set. They got off to a quick start and carried the pace, but Ryerson kept within striking distance.

Alberta did struggle returning the serve of freshman setter Lauren Wong that allowed Ryerson to take their first lead at 16-15 of the second set, but Alberta didn’t quit. It was a highly entertaining set from both teams filled with furious rallies and relentless efforts by both teams, but a Veltman ace late allowed Ryerson to steal the second set win.

“They’re a real good team. They earned the win,” said Pandas head coach Laurie Eisler. “The boxscore reflects a real even battle and it comes down to a few critical points here and there in each set and they handled the pressure better than we did. We made too many mistakes or just didn’t finish the play. Hats off to them, they are more than worthy of being in the final.

“You have to make plays to win. They weren’t making those mistakes at crucial times, and in the end it comes down to that.”

Ryerson started real strong in the third set after their big comeback the set before. They jumped out to a big lead, but Corbett’s back-to-back kills and a service ace cut Ryerson’s lead to 8-5. The Pandas fought back and forth with the Rams and were able to trim the deficit to just a single point on four different occasions the rest of the way, but their hopes of going for gold on their home court were cut short with a kill from senior middle Theanna Vernon to take the set 25-23.

““We had to fight for it. We started really tentative and we weren’t putting enough pressure on them at the service line,” said Eisler. “It’s never a lack of effort with our team, sometimes it’s just trying too hard.

“Our young athletes will learn from it and be better, but it’s real unfortunate for our graduating athletes won’t get that chance (for gold). We went through a real tough Toronto team last night, and we just didn’t have enough today.”

For Ryerson, they went through an ultra tough Alberta team in the semifinal on Saturday and now will face the No.8 seed UBC Thunderbirds in Sunday’s championship final – a battle of the last two gold medallists.]

For a school that didn’t have a single national championship until the Rams pulled off the feat last year, will now get a chance for their second in a row.

“It’s incredible to have a chance to play teams like these. We can’t even afford to fly out here and play these historic teams (Alberta and UBC) in exhibition, so to have the ability to see them at this level and get a chance to win a national championship is amazing,” said Reid.

“We’ve went through ups and downs this year in dealing with being a repeat conference champion and at the national level. So to have a chance tomorrow to play another historic program (in UBC) - I’m speechless.”