EDMONTON – Ryan Sclater, a fifth-year outside hitter from the Trinity Western Spartans, was named the U SPORTS Player of the Year in men’s volleyball, Thursday morning.

The English student from Port Coquitlam, B.C., is the second Trinity Western men’s volleyball player to be named U SPORTS Player of the Year in three years, with Nick Del Bianco receiving the honour in 2015. This marks the fourth time in program history that a Spartan has been given the honour.

The 2017 U SPORTS FOG Men’s Volleyball Championship gets under way Friday at University of Alberta’s Saville Community Sports Centre and concludes Saturday at 6 p.m. MT with the national final. All matches in the eight-team competition will be will be webcast live on USPORTS.LIVE.

Ryan Sclater, a fifth-year outside, had one of the most dominant attacking seasons in both Spartans and Canada West history. Sclater finished the year averaging 4.29 kills per set, while collecting a whopping 369 total kills. His kill count was second in the nation, the ninth most in conference history and set Trinity Western’s all-time record. Sclater also finished the year with 427.5 points, which is the fifth best single-season Canada West performance ever. Sclater, who finishes his career as a three-time conference all-star, posted a remarkable .308 hitting percentage as the Spartans’ high-volume attacker while helping TWU to a program-best 21 regular season wins.

“Ryan’s year was special,” said Spartans coach Ben Josephson. “We’ve had some great outside players come through here and the year he put together is statistically the best outside season we’ve ever seen. We’ve had him play left and right for the majority of the season and he’s been equally efficient at both. He’s a pretty special player. Not a lot of athletes I’ve had can play both sides and play that many different roles at a high level every single weekend. He has been incredible all season long and is very deserving of this award.”

The other nominees were Danny Demyanenko of McMaster, Vincente Ignacio Parraguirre Villalobos of Laval, and Kristen O’Brien of Dalhousie. 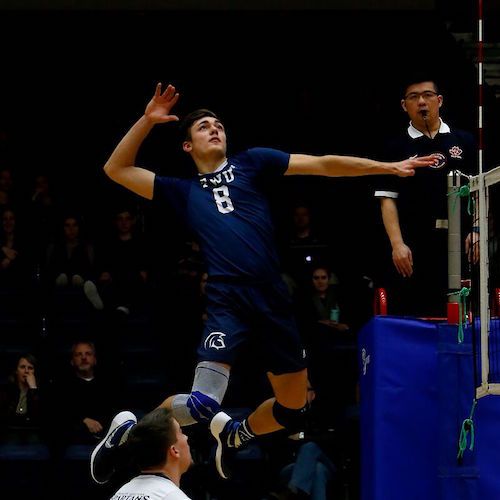 Loeppky, a product of Steinbach, Man., stepped into one of Canada’s most prestigious volleyball programs and made an immediate impact that few before him have ever approached. Loeppky led all Canada West servers in aces per set, with 0.55, which was the seventh best single-season average in Canada West history. On the attack, Loeppky finished second only on the Spartans to U SPORTS Player of the Year Ryan Sclater, with an average of 3.03 kills per set. His .285 hitting percentage was the eighth-best in the conference, while his 3.9 points per set was the ninth most in Canada West and once again, second only to Sclater amongst the Spartans.

“Eric’s year was surprising and unsurprising at the same time,” said Josephson. “It’s surprising in that rookies don’t usually play that polished. Most rookies have holes in their games and he doesn’t really have a lot of holes. He’s maybe our best receiver, he’s a great server, he’s a solid defender and he’s an incredible attacker. The crazy part is the sky is the limit. The part that’s not surprising is he’s been one of the best players in his age group his entire life. Anyone who has followed the game has seen him coming through the system knowing that he’s always been great and now he’s continued to be great. The best part is he’s just the best kid. He’s as good of a player as you’ll find as a rookie and he’s also the nicest and kindest person and a great teammate.”

The other nominees were Jordan Figueira of Toronto, Connor McConnell of UNB, and Olivier Riopel of Montréal. 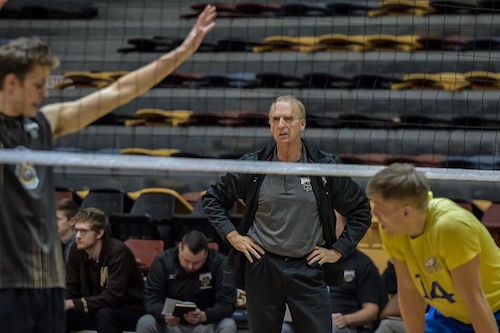 Pischke, in his 35th season at Manitoba, guided the squad to a 21-3 conference regular season record in 2016-17 and finished first in Canada West, while ranking No.1 in the country for four weeks. Manitoba had the longest conference win streak this season at 20 matches (Nov. 4 - Feb. 11/17) and were host of the Canada West Final Four for the second time in program’s history (2003-04 season).

On January 14 this season at home against UBC, Pischke, 61, reached another milestone with his 1,300 overall match win. He continues to increase his total as he holds the North American all-time coaching match wins record for men’s volleyball. After the Canada West Final Four, the Winnipeg native now holds an overall coaching match record at 1,310-363 (.783 winning percentage). This is also the most overall coaching wins by a U SPORTS head coach in history.

During Pischke’s 35 years as the Bison men’s volleyball head coach, the Bisons have now qualified for the U SPORTS Men’s Volleyball Championship 27 times and won nine titles with Pischke at the helm. Under Pischke, the Bisons have collected nine gold, nine silver and five U SPORTS bronze medals, two fourth-place finishes, with their lowest showing being a fifth-place finish in 26 appearances so far at the U SPORTS Championship level.

“Garth’s selection as the U SPORTS Men’s Volleyball Coach of the Year is fantastic news for Bison Sports. His record is unparalleled in university volleyball and he continues to drive the success of our program,” said Manitoba director of athletics Gene Muller. “He achieved the milestone of 1,300 overall wins as a Bison coach this season and led the Bisons team to a 20-game win streak in conference league play. We are excited and honored by this award given to Garth.”

The other nominees were Michael Wahbi of York, Pascal Clement of Laval, and Dan Ota of Dalhousie. 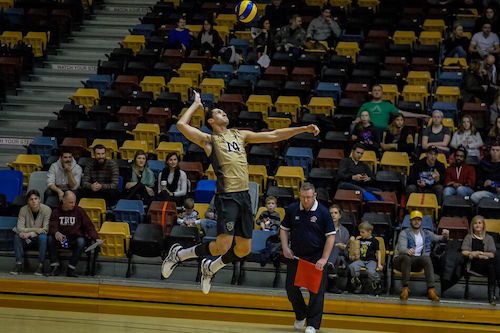 Rooney has been a leader on and off the floor since the moment he joined the Manitoba program. In addition to his studies and athletic prowess, he has been part of University of Manitoba Athletic Council (UMAC) for last four years, including the last two years as president. He has worked to coordinate two key outreach initiatives for the Bisons, helping to lead the Bisons Against Bullying program, as well as the Bison Book Buddies Program.

Rooney has also been a volunteer for Manitoba’s ‘I Love to Read’ program, which is a month-long celebration that is held each year to encourage reading, writing, and sharing in the joy of literacy. In addition to these volunteer commitments, Rooney also volunteers at the Siloam Mission, which is a Christian humanitarian organization that alleviates hardships and provides opportunities for change for those affected by homelessness. Rooney has also been a club volleyball coach for five years while at Manitoba.

“Ken is a fantastic role model for all of our student-athletes. He has taken on a leadership role both on and off the court and is always involved in some form of giving back,” said Pischke. “He has been one of my favourite athletes to coach over my career and his incredible work ethic is truly inspiring.”

The other nominees were Vincent Thibault-Bernier of Laval, Alex Duncan-Thibault of York, and Liam Power of Memorial.