Action heated up at San Paolo Stadium Tuesday, as the track and field competition entered its second day at the 30th Summer Universiade in Naples, Italy. 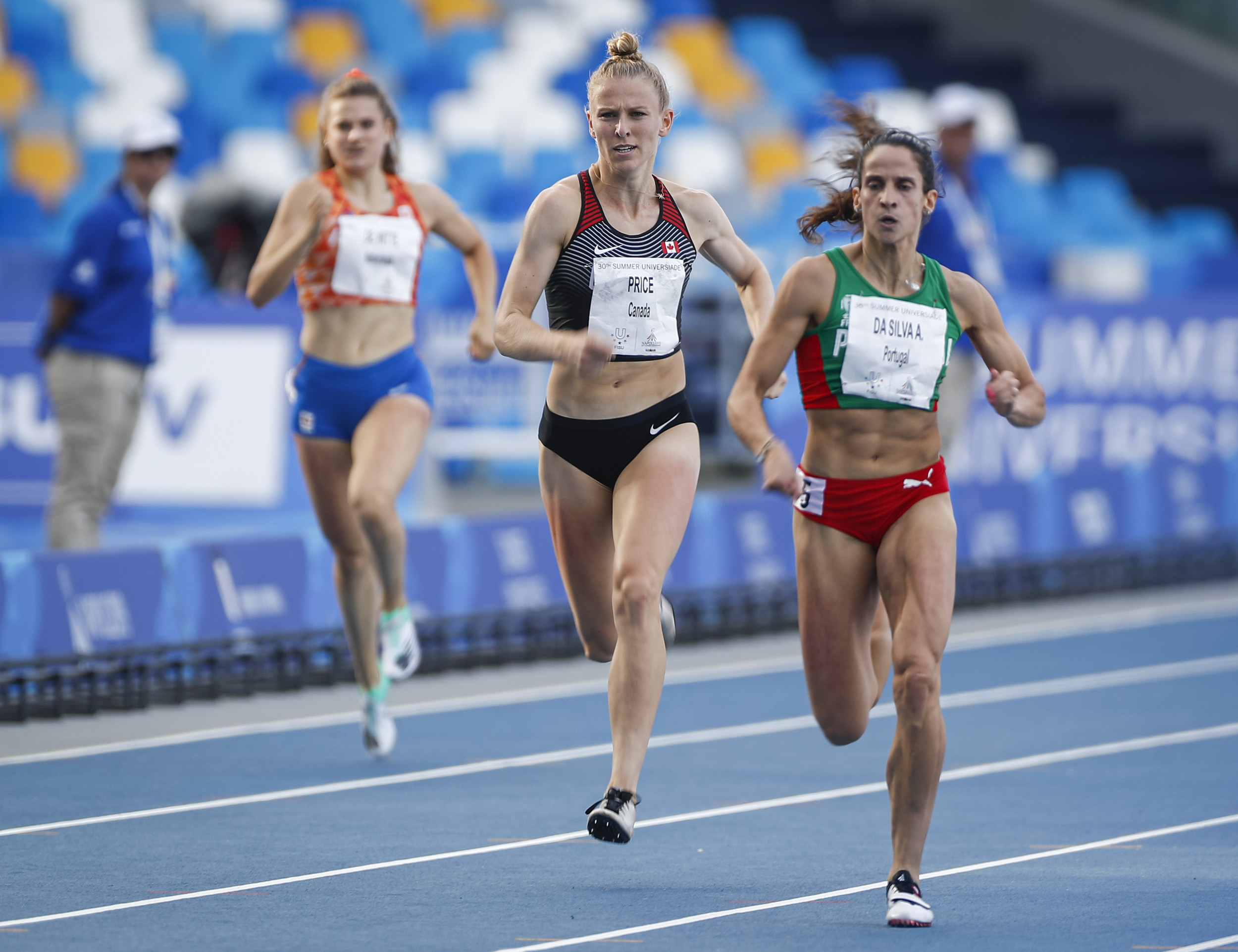 At Naples, the second day of competition at San Paulo Stadium wrapped up with Canada posting several solid performances.

Canada came into the day with three finals already set: Gabby Rains in the women’s discus along with Farah Abdulkarim and Benjamin Preisner in the men’s 10,000 metres. As the night went on, a fourth was added with Duan Asemota advancing through the semifinals to the men’s 100-metre final.

In the marquee event of the competition, Asemota ran a 10.39, finishing fifth. Moments later, Rains finished her event with a fourth-place finish in the discus, posting a top throw of 55.74 metres. And in the night’s final event, Abdulkarim stayed with the top pack for the majority of the race but couldn’t keep up as the leaders pulled away, posting a time of 29:43.51 to finish fifth. Preisner was four spots back of him, crossing the line in 30:27.37.

Canada also qualified seven others through to finals on Tuesday, beginning in the morning session with the women’s pole vault where Rachel Wolfs leaped 3.90 metres to advance to Wednesday’s final. In the men’s 3,000-metre steeplechase, Ryan Smeeton and Jean-Simon Desgagnés qualified second and third for the final, which will take place Friday. Smeeton finished just over a second behind the leader from Japan, while Desgagnés was less than three tenths behind him.

In the evening session, Maddy Price got things started with her semifinal time of 52.23, easily advancing to Wednesday night’s final in the 400m. And in the 800 metres, Jenna Westaway qualified for the final in 2:03.42.

“It has been a really great start,” said Canadian head coach Bob Westman. “Everyone is in a great mindset, they’re ready and prepared. There are people that weren’t supposed to be in the top eight making finals…we’re just missing out on some medals right now, but on the law of averages we’re going to get some of those.

“I think we’re off to a great start two days in.”

“We just had a really hard time sticking with it,” said Canada’s head coach Laurie Eisler. “We saw a really skilled and passionate team today that put it all out there and they really deserved the win. It was a regression for us for sure. Maybe the moment was a little bit big for our team and we didn’t bring the level that we needed to today but we’ll regroup and try again tomorrow.”

“From my perspective we made a lot of unforced errors,” said Canadian libero Cassie Bujan of the University of Manitoba. “We were super prepared for this team, I felt, but I guess we underestimated their strength and size for sure. We just kind of fell short on our side.”

At Ariano, the men's volleyball team was defeated 3-0 by Poland on Tuesday night at Palazzetto dello Sport, in their final game of the round-robin tournament of these Games.

The challenge was a big one for the Canadians, as the Poles had not lost a single set so far in the competition. Poland completes its preliminary-play action with the top spot in Group C, while Canada, with a 1-3 record, finishes fourth in the pool.

“We learned that our serving pressure was not enough to take some of their offence away,” said Canada’s head coach Dave Preston. “They are built very differently than we are. I think our reception handled their serving, but their net play was just a little beyond us.

Canada will begin the consolation round on Thursday against Ukraine to play for the 9th through 16th spots. The two teams will play at 11:30 a.m. EDT / 8:30 a.m. PDT (5:30 p.m. local time) at Palatedeschi in Benevento.

At Cercola, Canada had a roaring third quarter to come from behind and beat Argentina 82-68 in the consolation semifinal. Canada will now play Germany for fifth spot.

After a tragic second quarter of being out-scored 24-15, Canada entered half time down 42-36. The team rallied back for a big third quarter, out-scoring Argentina 29-15 and then 17-11 in the fourth to take the game.

Canada shot just 35 per cent from the field and suffered from distance, shooting just 19 per cent, while they were successful under the glass winning the rebounding war 47-33. Captain Kadre Gray led his side in scoring with 25 points - his highest scoring performance of the tournament - while Munis Tutu contributed 16 points and Nik Kasongo added 11. Gray also had a team-high seven rebounds along with Marc-André Fortin.

At Piscina Scandone, Sophie Angus and Nina Kucheran raced in the 50m breaststroke semifinal. Angus finished fourth overall to qualify for the finals in 31.26. In the women’s 200m butterfly, Hannah Genich finished sixth in her semifinal in 2:14.18 but did not advance to the finals. Toronto’s Cameron Kidd was forced into a swim-off for the final spot in the 50m freestyle final. Kidd tied Russia’s Daniil Markov in the semifinal and then fell short by 0.09 seconds in the swim-off.

Olympian Kennedy Goss touched in for eighth in the 200m freestyle final in what was her 11th swim of the meet.

“I wasn’t too happy with the race tonight and it’s been a long, long competition and tomorrow’s the last day so hopefully I have a good 400 and make the 400 finals and it will be better than this final,” said Goss, a Rio 2016 Olympian.

“I think it’s always good to have someone who has experience (on the team). Having someone who was experienced for me was very helpful, so I’ve been trying to be a leader for all the younger athletes, showing them how to step up even if you don’t want to and that having a lot of races is okay. It’s okay to have okay times as long as we make this fun and professional, then we are doing something right.”

“That last one was disappointing but I’ve been doing better at this meet than I have been all season,” said Wilm after her sixth race. “If I had gone this time at another meet I would have been really happy, but following the last two races it was pretty disappointing. I honestly thought I could podium for that.”

Wilm still has the 4x100m medley relay on Wednesday night to redeem her performance in the 100m backstroke final.

At Caroria, Hunter Carroll dropped a narrow contest, 13-11, to Poland’s Jakub Posadzy in the kiorugi men’s -68kg Round of 32.

At Monterusciello, Canada wrapped up competition in table tennis. Bryan Ho defeated Estonia’s Artjom Hiisku 4-2 in the men’s singles Round of 64, before falling to Florian Cnudde of Belgium, 4-0, in the Round of 32. Fellow Canadian Matthew Lehman was eliminated in the Round of 64 following a 4-0 loss to Wang-Wei Peng of Chines Taipei.

Vida Sieu, Alayna Chan and Justina Yeung all dropped 4-0 decisions in the Round of 64 in women’s singles action.

At Baronissi, David Chen-Li, Gavin Hay and Edward Lin wrapped up Canada’s fencing competition with a 45-15 loss to France to finish 14th in the men’s foil team relay.