The No. 1 UPEI Panthers (8-0) have made history by being ranked at the top of the national list in women’s basketball.

Undefeated through eight games, the Panthers lead the AUS in scoring, averaging 77.5 points per game, thanks in large part to fourth-year guard, Jenna Mae Ellsworth, who is averaging 21.3 points per game to go with 7.4 rebounds.

Ellsworth has been on fire from deep, averaging 52.6 percent from three-point land.

Ellsworth led the Panthers to a pair of victories this past weekend against the Acadia Axewomen (4-3) and Saint Mary’s Huskies (6-2). 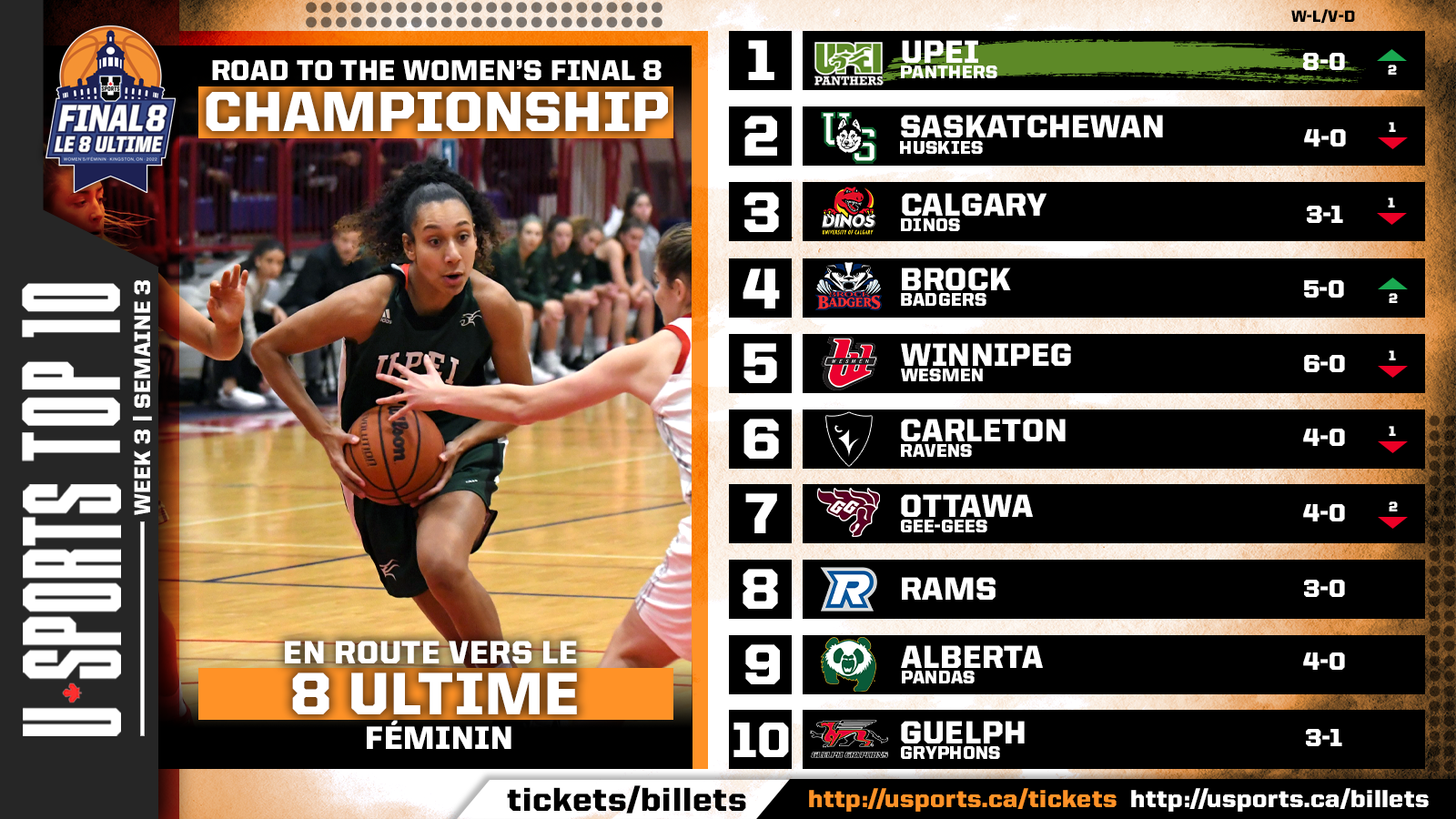 In men’s basketball, the No.1 Carleton Ravens (4-0) are in familiar territory, once again earning the top ranking.

The Ravens, led by head coach Taffe Charles, extended their win streak with a pair of home victories over the Ontario Tech Ridgebacks (1-5) this past weekend. 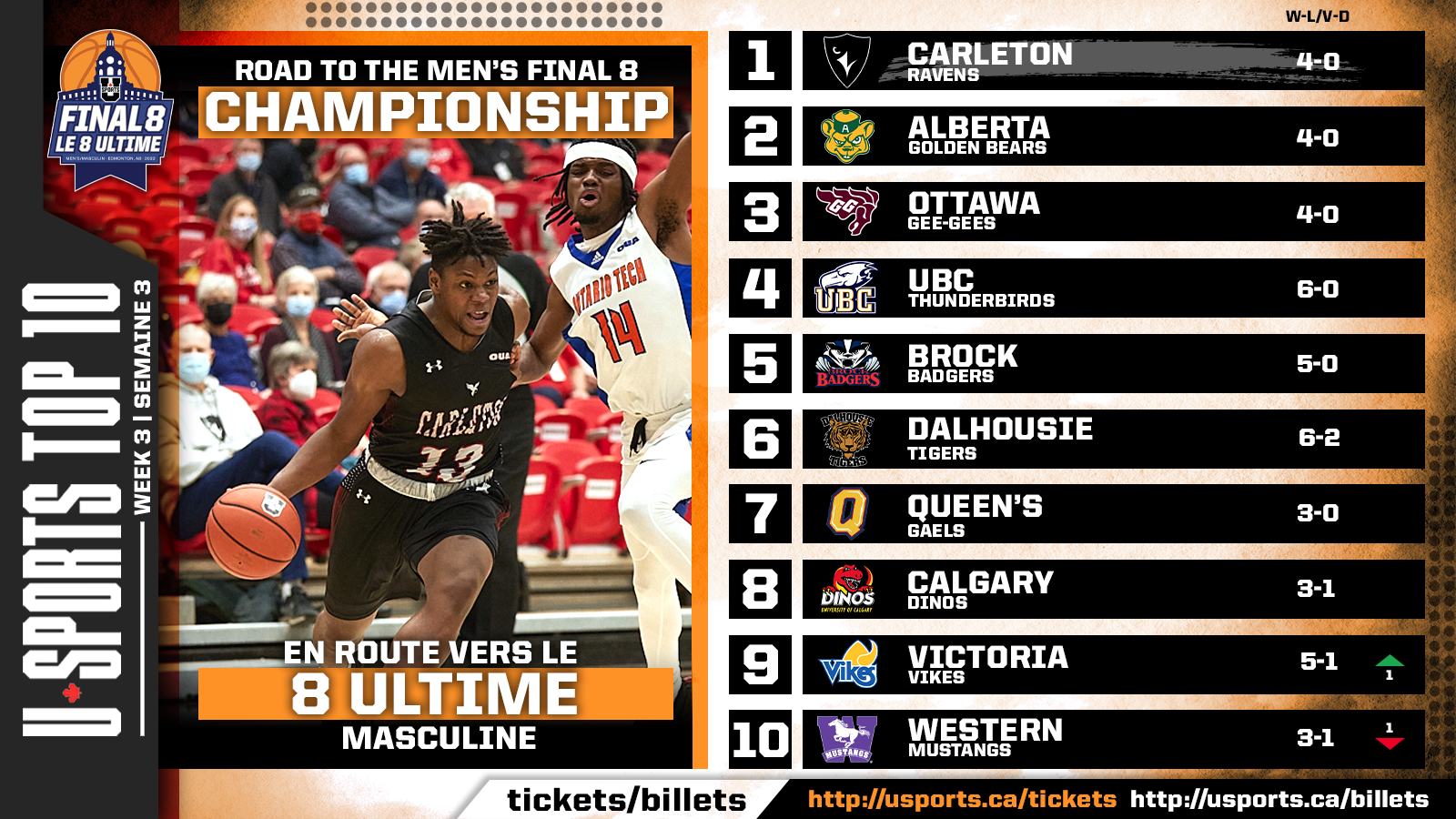 Women’s hockey has a new rankings leader, as the Saint Mary’s Huskies (12-2) have jumped up the ladder to the No.1 spot.

After a 5-3 victory over the Dalhousie Tigers (3-11), the Huskies earned a crucial two points over the No. 8 StFX X-Women (9-5), defeating the reigning AUS champions 3-1. 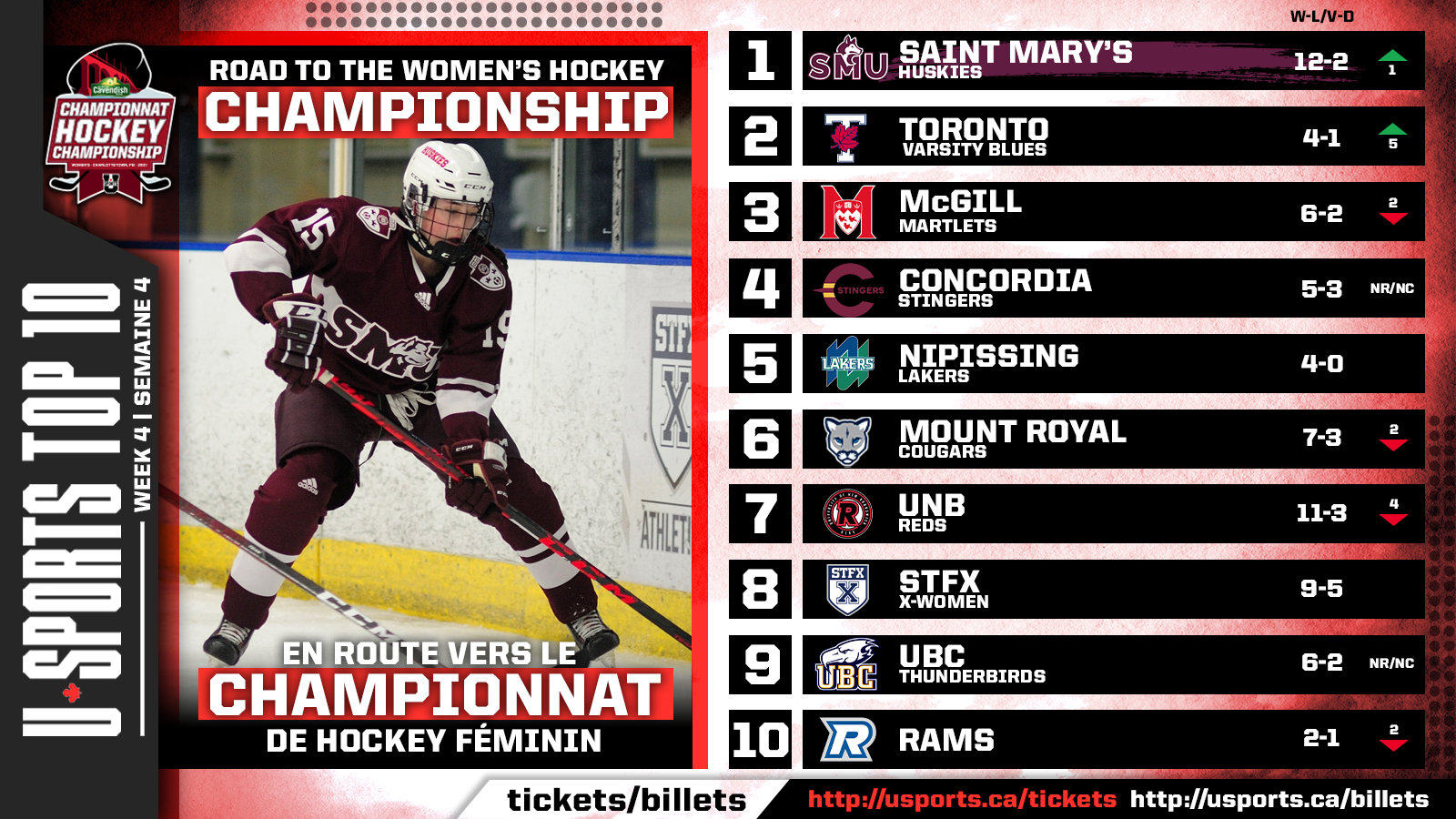 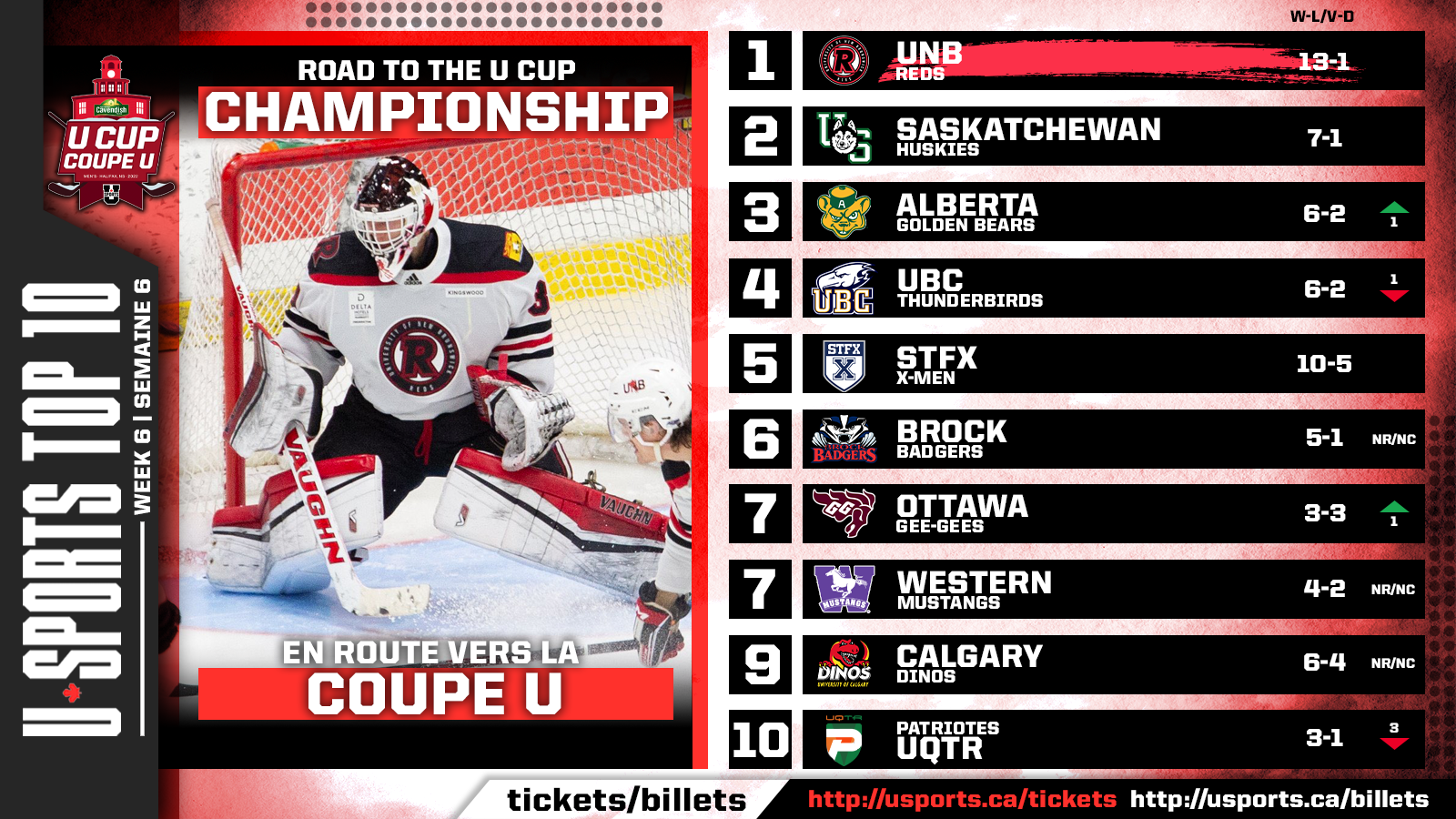 In women’s volleyball, the unbeaten No. 1 Alberta Pandas (4-0) remain the top seed after defeating the No. 10 Mount Royal Cougars (2-2) in a pair of road matches.

Fifth-year outside, Kory White combined for 39 kills and five aces through the two matches. 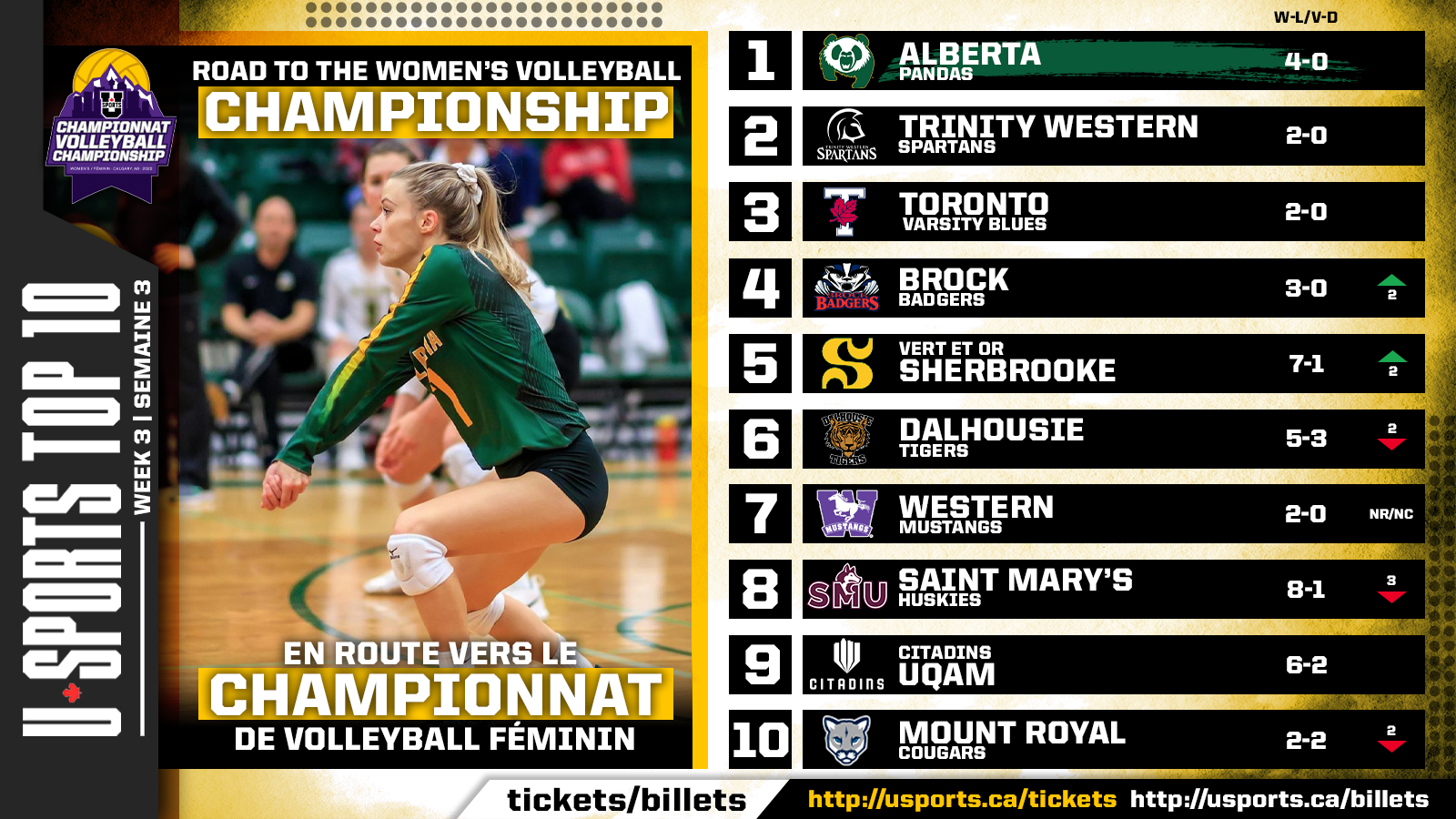 In men’s volleyball, the Trinity Western Spartans (2-0) are still the top squad after being idle in conference matches.

The Spartans wrapped up their California tour with a 5-2 record, falling to Long Beach State University in five sets to close out the tournament.

Trinity Western defeated Pepperdine twice, UC Santa Barbara, UCLA, and LBSU before losing to LBSU (winners of two of the past three NCAA championships) in the final game. 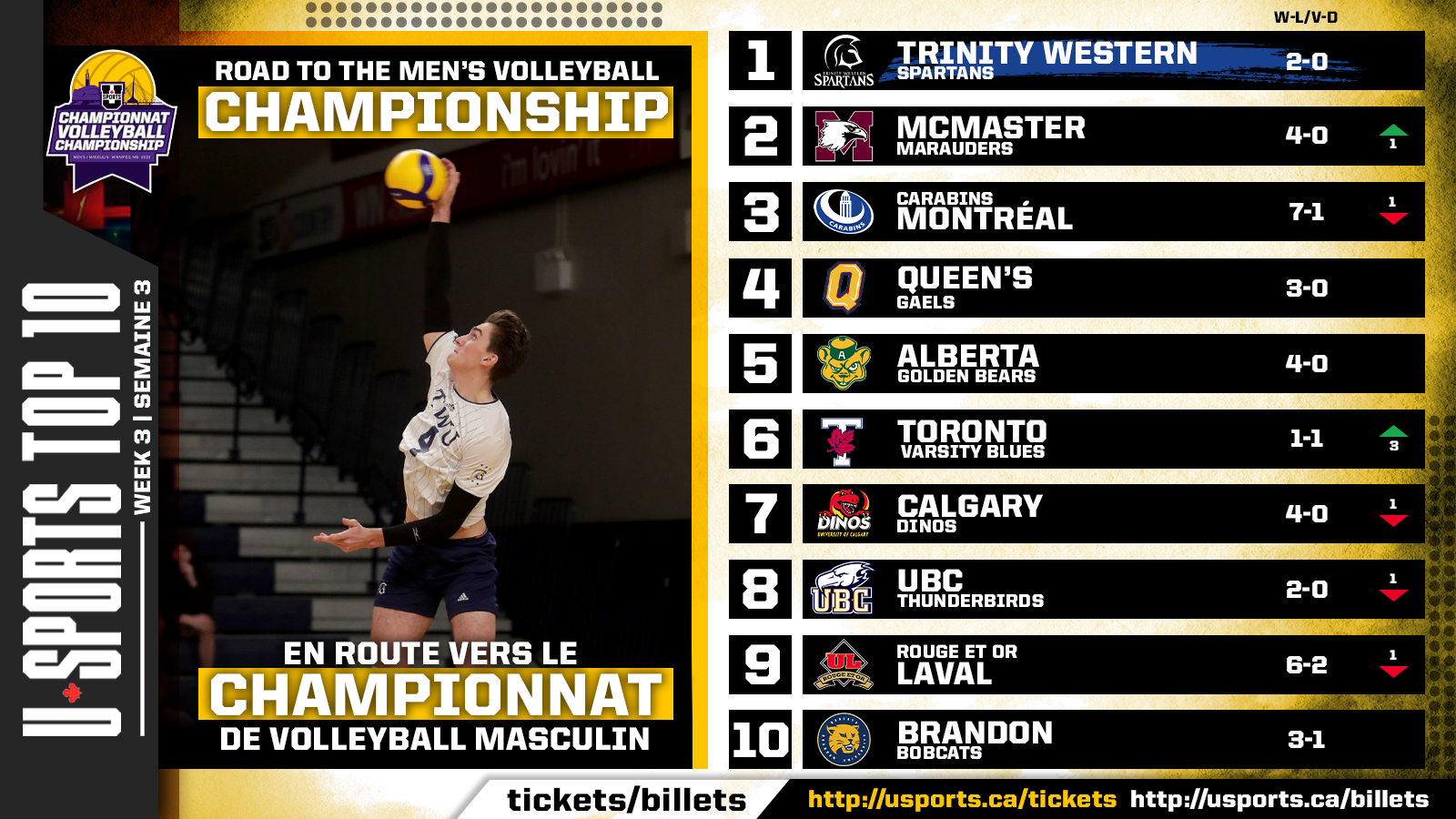 In women’s wrestling, the No. 1 Alberta Pandas remain the top crew, while the Concordia Stingers broke into the top 10 for the first time this season with the No. 8 seed. 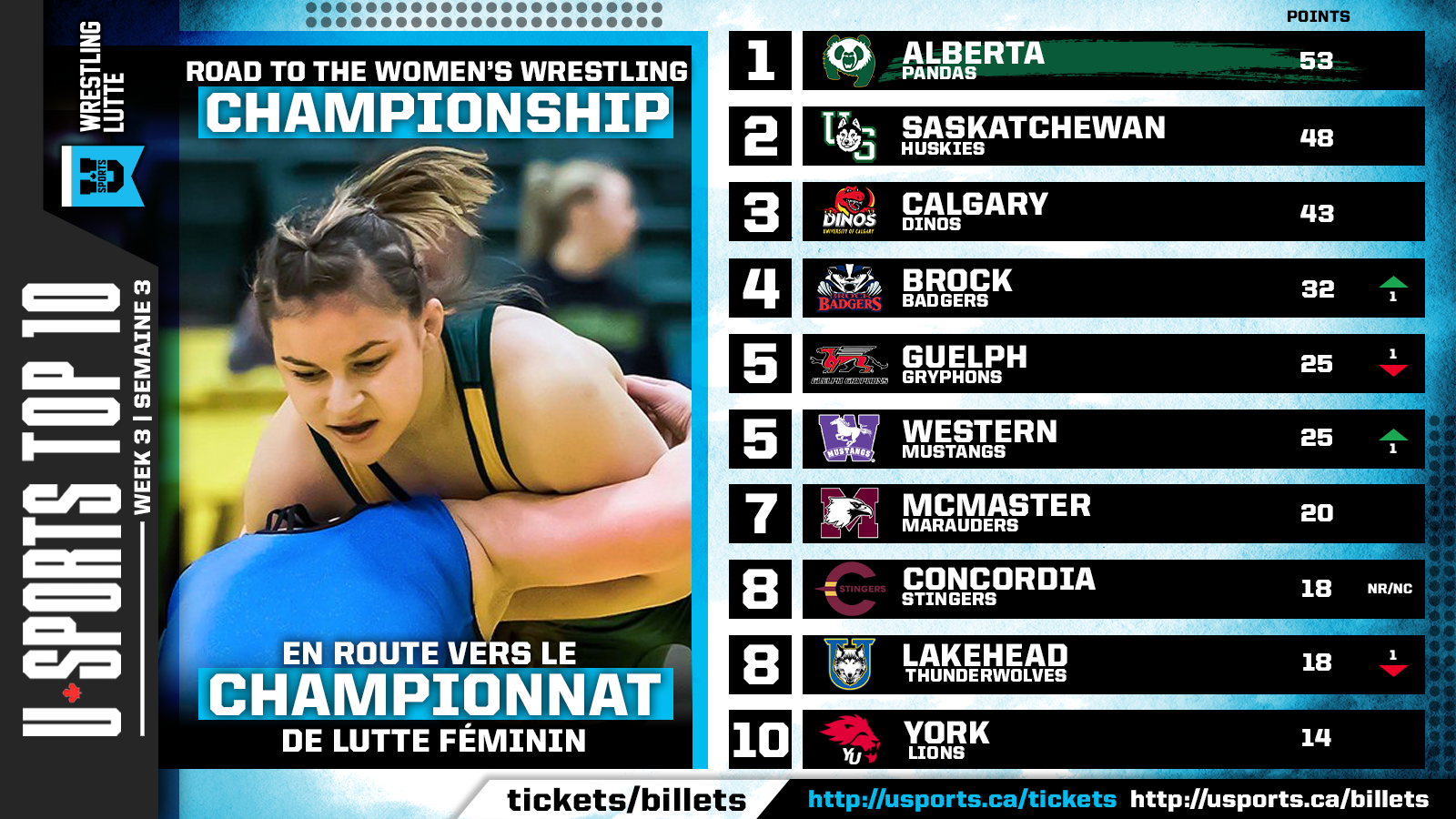 On the men’s side, the No. 1 Alberta Golden Bears usurped the No. 2 Saskatchewan Huskies for the top seed.

The Huskies will look to reclaim the top position after the Huskie Open held this Saturday as the top Canada West men’s and women’s wrestling teams square off in Saskatoon. 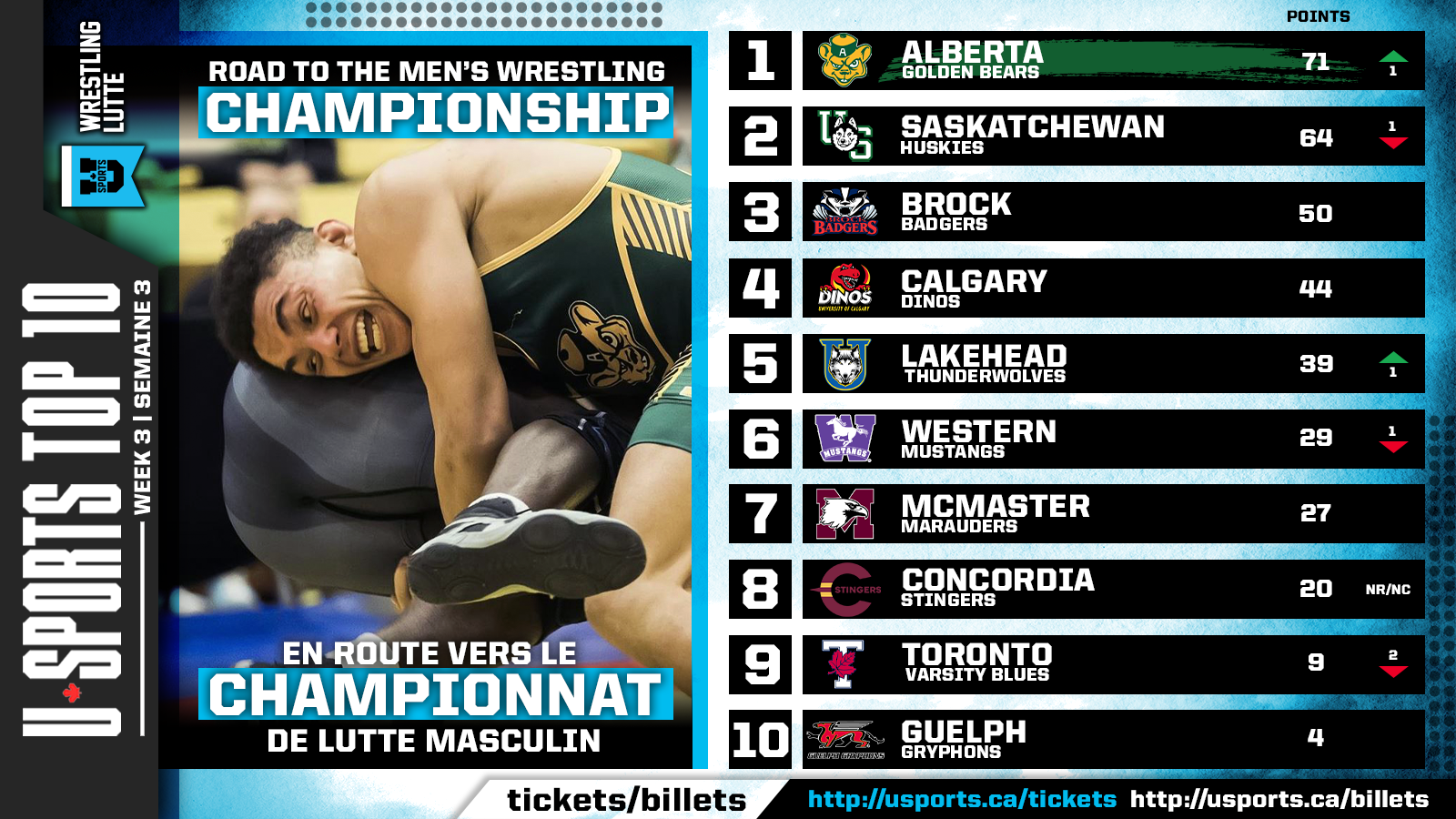