When the U SPORTS Women’s Basketball Final 8 Presented by COMDA.com tips off on Thursday, the Laval Rouge et Or will be hoping to capture their first Bronze Baby in school history.

The Rouge et Or were named tournament favourites on Sunday, while the Concordia Stingers earned the at-large berth, as the seeding and quarterfinal matchups were announced.

The 2019 U SPORTS Women’s Basketball Final 8 Presented by COMDA.com, kicks off this Thursday at Ryerson’s Mattamy Athletic Centre and concludes Sunday with the gold-medal final at 7:30 p.m. ET / 4:30 p.m. PT. The semifinals and final will be broadcasted live on Sportsnet 360 TVA Sports and SN NOW. All remaining games live streamed at USPORTS.LIVE. 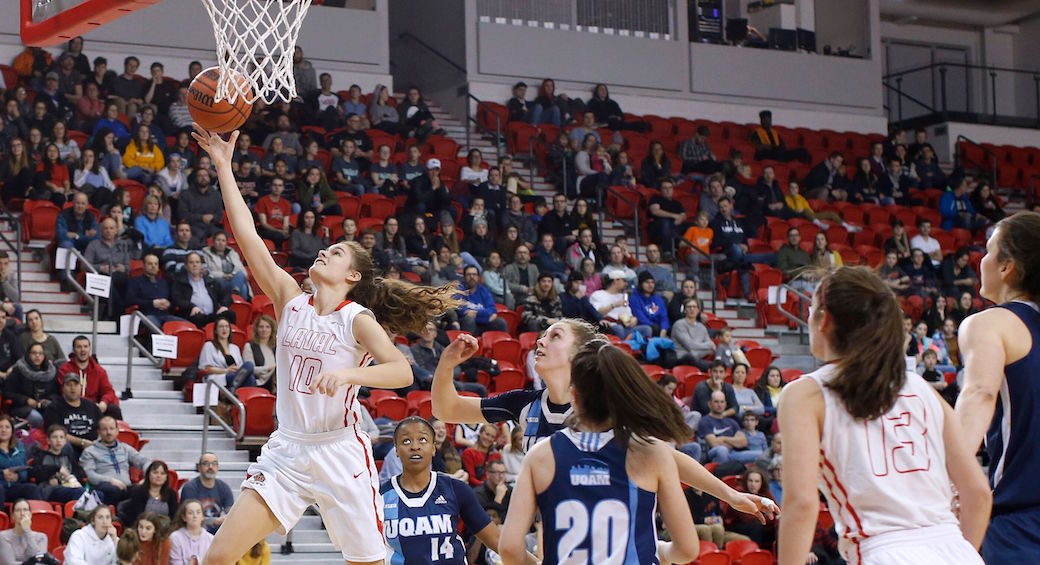 The Laval Rouge et Or flirted with perfection in 2018-19, as they came close to the first undefeated season of their 48-year history. They lost a close call in their very last game of the season at McGill, to finish the year 15-1, good for first place in the RSEQ for a third year in a row and setting a new team record for points (1187) since the formalization of the 16-game season format in 2003.The Rouge et Or would finish off the season leading the conference in 16 different categories.

The Rouge et Or boast a mature team, led by RSEQ MVP fifth year guard Sarah-Jane Marois, the defensive player of the year and Texas Longhorns transfer Khaléann Caron-Goudreau, and Jane Gagné, the 2017 conference MVP and Laval leading scorer this year. Marois and Gagné were on the 2017 Rouge et Or team that won silver at the U SPORTS Championship. 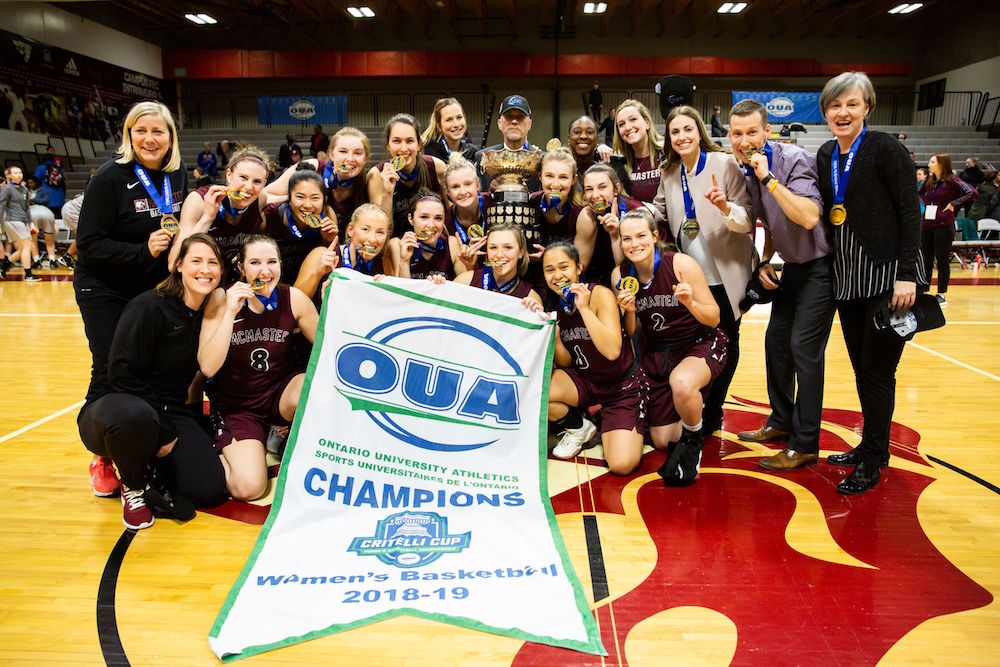 The McMaster Marauders finished second in the OUA standings with a 21-3 record. The team would draw much of its success from its offensive dominance, while also demonstrating their ball control leading the nation in assists per game (18.5). The largest loss for the Marauders was just 14 points to Ottawa, who had the best record in the OUA. Subsequently the Marauders would capture a pair of 50-plus point wins in their final three weeks of the season to propel their momentum into the playoffs.

The Marauders would have an extra special end to the season, seeing two of their fifth-year seniors reach the 1,000 point club at the end of their OUA careers: Linnaea Harper and Hilary Hanaka who reached 1,003 and 1,136 points respectively. A third key player to keep an eye out for is Sarah Gates, ranked second in the OUA in points per game and leads the team infield goals/game and free throws/game. 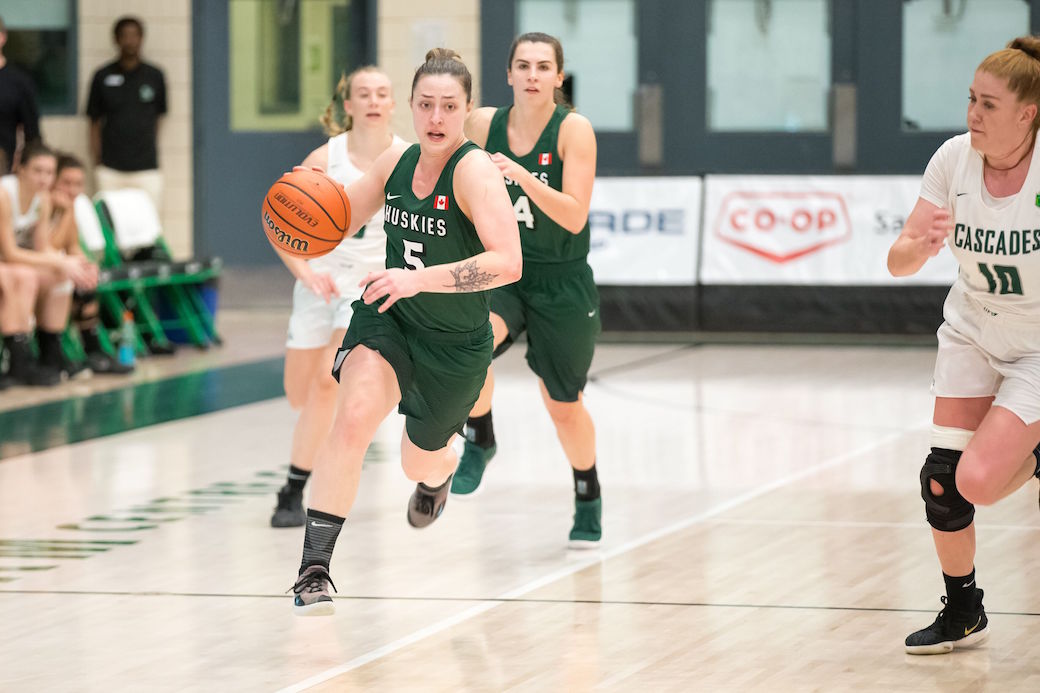 It was another dominant season for the Saskatchewan Huskies, who earned the Canada West No. 1 seed in the playoffs due to holding the highest RPI in the conference.  After starting the year 4-2, Saskatchewan went on a 12-game winning streak that stretched from Nov.16 – Jan.26. During that streak, Saskatchewan outscored their opponents 1073-594. Saskatchewan is in the U SPORTS Final 8 for the sixth straight season, with two medals from that stretch, including a gold medal in 2016 and second place last year.

For the Huskies, Final 8 experience runs through the veins of many members of the roster. In particular, returning players Sabine Dukate, Megan Ahlstrom, Vera Crooks and Janaya Brown were all present on the 2016 national championship squad. Among those veterans, Dukate leads the team in field goals/game (5.8/13.9), points/game (15.6), was 3rd in the nation in three-point percentage (42.7) and was named a Canada West First-Team All-Star this season for the second time in her career. 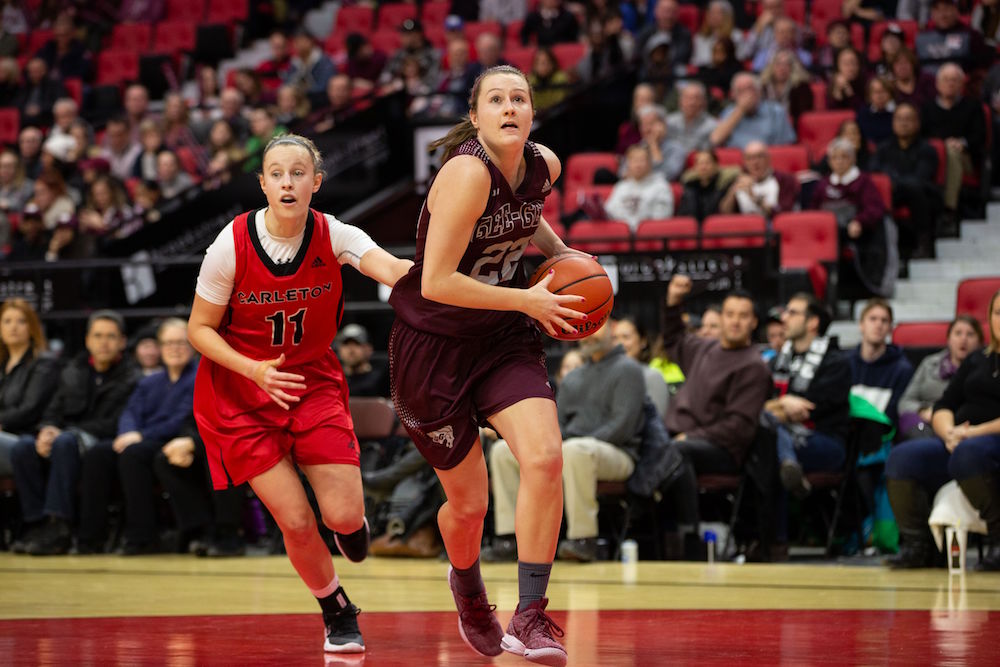 Turning in their best regular season performance in program history, the Ottawa Gee-Gees women’s basketball team ascended to the top of the nation’s rankings in the 2018-19 season. Their campaign has had two noteworthy runs – the first was following a two-point heartbreaking loss to Carleton in the first game of the season. The Gee-Gees refocused and reeled off 10 straight wins to close 2018 and kick off the New Year. Signature wins over Lakehead and McMaster highlighted the powerful first semester for the Garnet and Grey. In their second game of 2019, the Gee-Gees suffered their last loss of the regular season in Toronto to Ryerson, to which they responded to with an 11-win tour de force with a revenge win over the Rams and a big-time win at the Capital Hoops Classic against Carleton.

The team has yet to claim a national title but got close in 2012 when they claimed the bronze medal at the Women’s Final 8 in Calgary. The offensive talents of Angela Ribarich who finished the regular season fifth in the country in field goal percentage (54.8) and second in blocks (44) will be a key player in Ottawa’s hopes to bring home the programs first title. 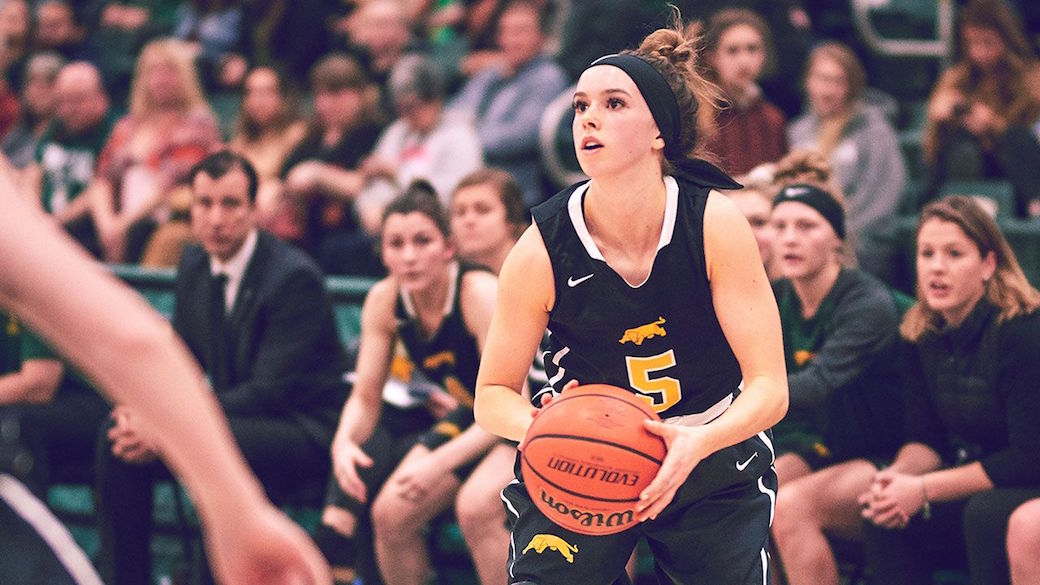 The Cougars went to work over the regular season sitting amongst the top in the Canada West standings with a 17-3 record. The Cougars had an eight-game win streak to conclude the regular season, winning five of those contests by 20-plus points. While the team has demonstrated its offensive ability, it’s their defensive talents that set them apart from the pack. They lead the nation in rebounds (51.3) and blocks (4.7).

With a similar squad to last year’s team that won a bronze medal on home court, the familiar presence of third-year Guard Kyanna Giles’ talents have been crucial in the team’s success as she leads in six statistical categories. Giles is only the third player from the Cougars to win multiple Canada West First Team all-star selections. The program is no stranger to the women’s Final 8, and the Cougars will be looking to build from last year’s performance and look to win the their second national title. 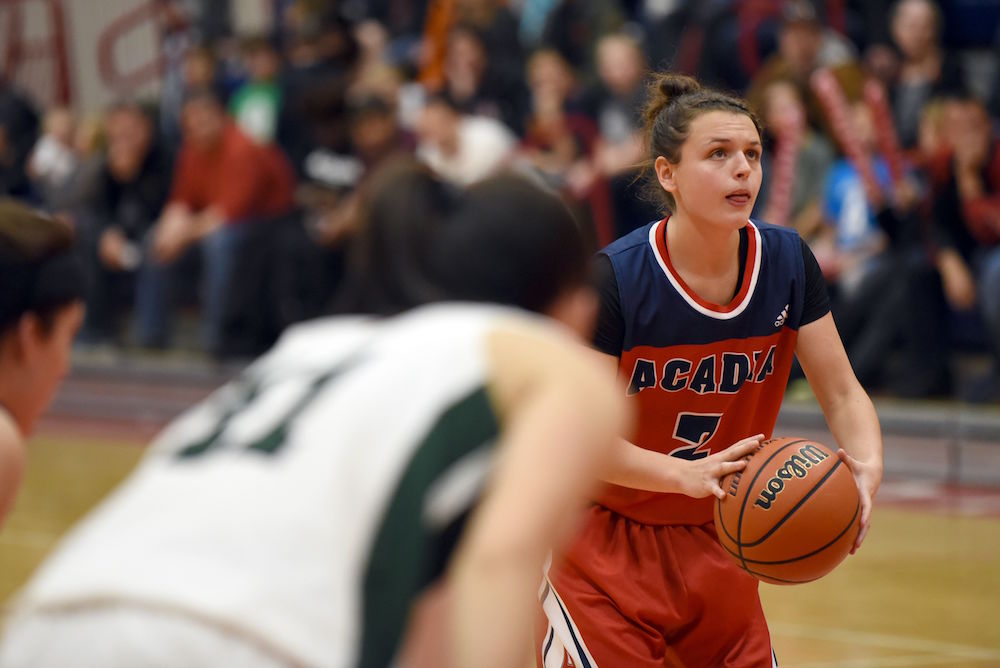 The Axewomen finished third in the AUS standings with a 13-7 record and had a seven-game win streak before dropping their final four games of the season to Cape Breton, UPEI and UNB. However, the team finished first in the conference in field goals/game (28.5), rebounds/game (40.8), assists/game (17.1), and steals/game (10.1).

While the team had its ups and down this season, it proved a monumental one for third-year guard, Haley McDonald, who now owns the team record for points scored in a single season record (465). The team will look to McDonald to build from last year’s Final 8 experience after bowing out in the quarterfinals to Saskatchewan. 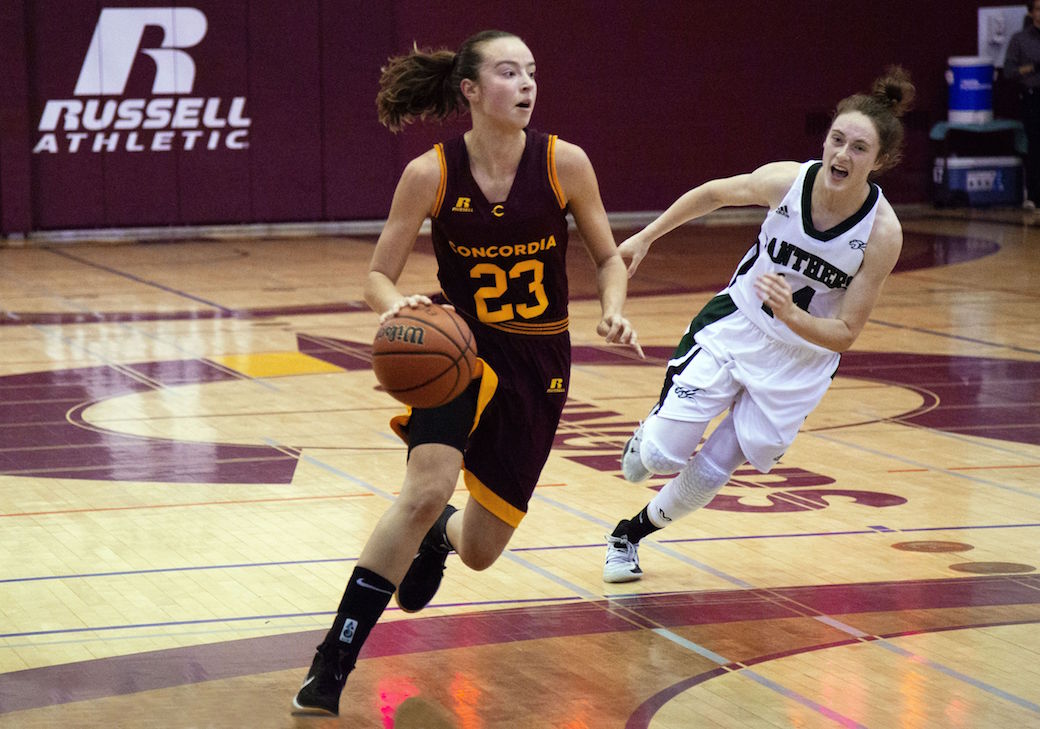 The Concordia Stingers makes its first appearance at the national championship since 1999.

Under the guidance of head coach Tenicha Gittens, Concordia finished second in the Quebec conference with a 10-6 record. The Stingers were ranked in the Top 10 for 12 of 13 weeks this season and peaked at No. 2 for three weeks. They wrapped up the regular season in the No. 10 spot.

Concordia has a good balance of youth and experience. They have depended on RSEQ Rookie of the Year and first team all-star Myriam Leclerc, a five-foot-10 guard, to lead them alongside third-year guard Caroline Task, also a first team all-star. They finished first and third in conference scoring, averaging 18.8 and 15.6 points a game, respectively.

A never-say-die team that plays aggressively and emphasizes defence, Concordia should not be underestimated 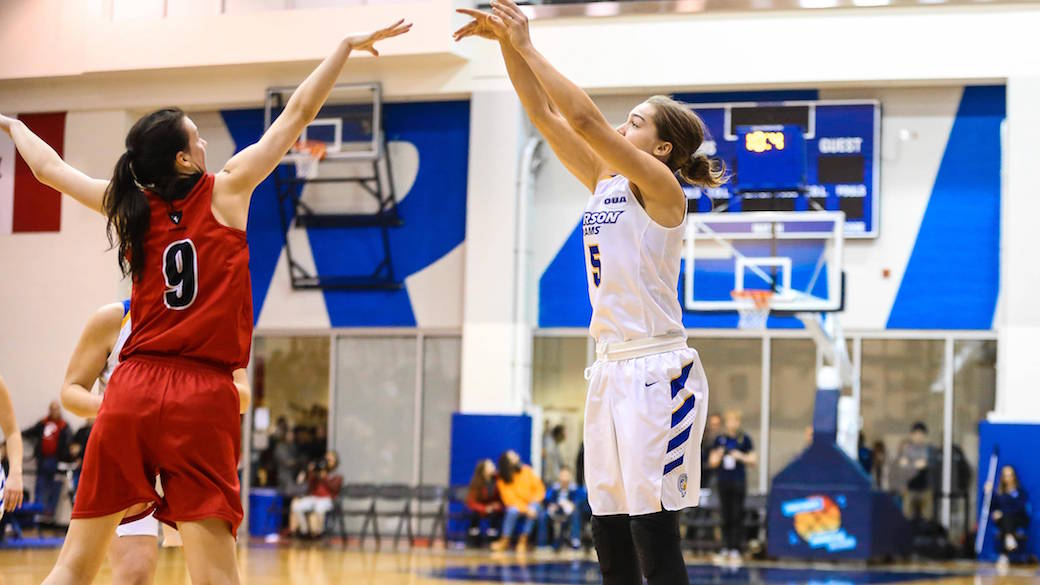 The Ryerson Rams had a tough final weekend of their regular season dropping two straight games to York and Queen’s to finish 17-6. The Rams began the season off strong on a nine-game win streak demonstrating their depth of an offence which finished third in the conference in field goal percentage (40.6). The Rams would dominate the first round of playoffs with an 85-40 win over Laurentian before losing to the Carleton Ravens in the OUA quarterfinals.

This will be the last season for three veteran superstars on the Rams: Sofia Paska, Katherine Follis and Cara Tiemens who were all part of the 2016-17 team that won the team’s first OUA title and placed second at the National Championship.