The Calgary Dinos look to defend their first-ever W.P. McGee Trophy in program history when the 2019 U SPORTS Men’s Basketball Final 8 tournament tips off this week.

The Canada West champion Dinos, who completed just the fifth undefeated season in conference history, will open as the No. 2 seed behind the Carleton Ravens, who were named tournament favourites on Sunday. The Ravens will be looking to add to their record collection of 13 national titles since 2002, and eighth banner in nine seasons, after falling in the national semifinals last season.

Meanwhile, the Alberta Golden Bears earned the at-large berth, as the seeding and quarterfinal matchups were announced.

The 2019 U SPORTS Men’s Basketball Final 8, hosted by the Dalhousie Tigers in Halifax, kicks off on Friday at the Scotiabank Centre and concludes next Sunday with the gold-medal final at 5 p.m. ET / 2 p.m. PT. The semifinals and final will be broadcasted live on Sportsnet 360, TVA Sports and SN NOW. All remaining games livestreamed at USPORTS.LIVE. 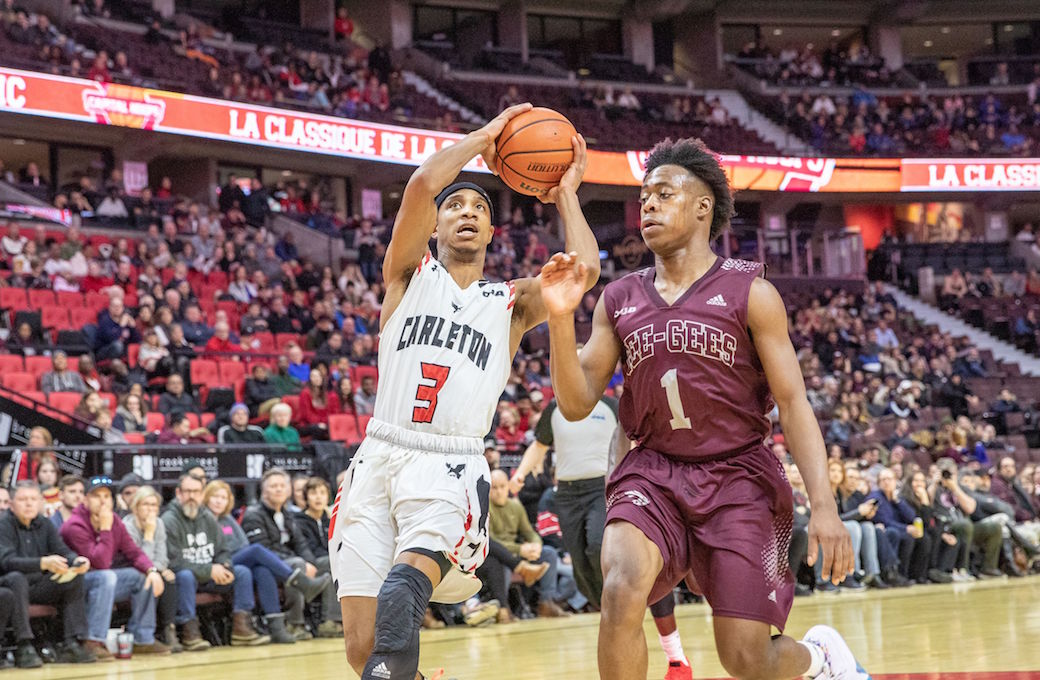 The Carleton Ravens found themselves in a familiar spot at the end of the 2018-19 OUA regular season. They finished at the top of the OUA east division, earning a first-round bye into the quarterfinals in the process. The Ravens willed their way through the OUA competition, finishing the year with a 22-1 record. Their only loss came to rival Ryerson Rams on Jan. 26, a 78-74 decision at the Ravens’ Nest in Ottawa. The successful regular season campaign led to a number of individual awards for the Ravens. Carleton had three players named to the OUA All-Star teams (Eddie Ekiyor, TJ Lall and Munis Tutu). Marcus Anderson was named OUA Defensive Player of the Year for the OUA, his second career defensive POY award. Dave Smart was also awarded the Coach of the Year. 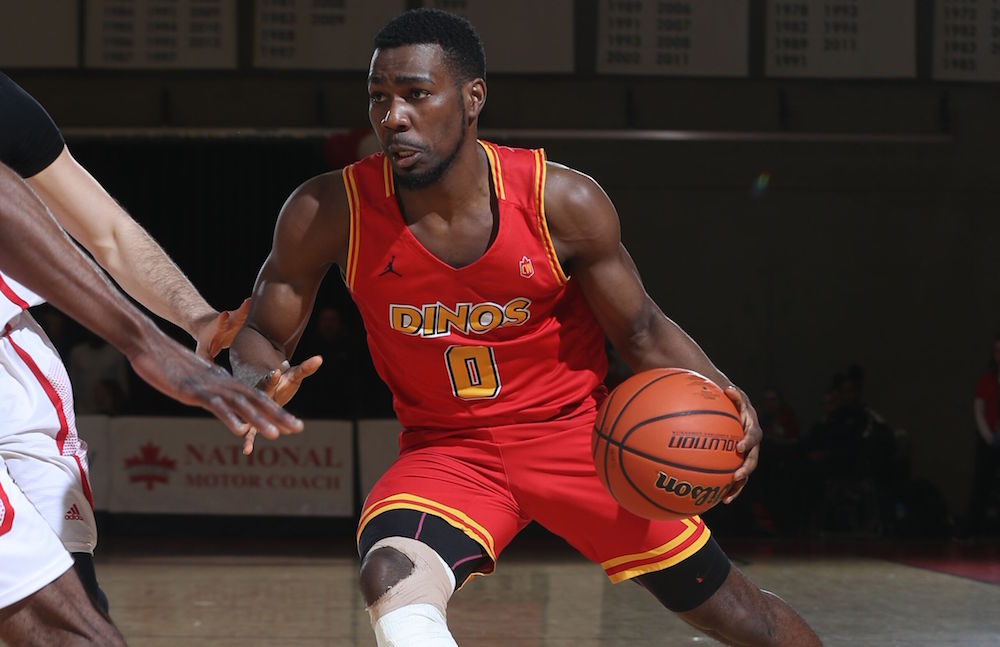 The defending U SPORTS champion Dinos picked up where they left off in 2018 and posted the program’s first undefeated regular season, cruising to a 20-0 record with an average win margin of better than 24 points per game in Canada West. With an outstanding crop of returning veterans, the Dinos added transfer big man Brett Layton who made an immediate impact, finishing second on the team with 16.9 points per game and finishing third in the nation in offensive rebounding and sixth in blocks. Along with Canada West Player of the Year Mambi Diawara and fellow first team all-star David Kapinga, the Dinos also have two more fifth-year seniors in Lars Schlueter and Lucas Mannes, both of whom made significant contributions in the 2018 championship run. Calgary finished in the top five in the country in scoring, rebounding, points per game allowed, and opponents’ field goal percentage and led all U SPORTS teams with an average of better than 11 steals per game. 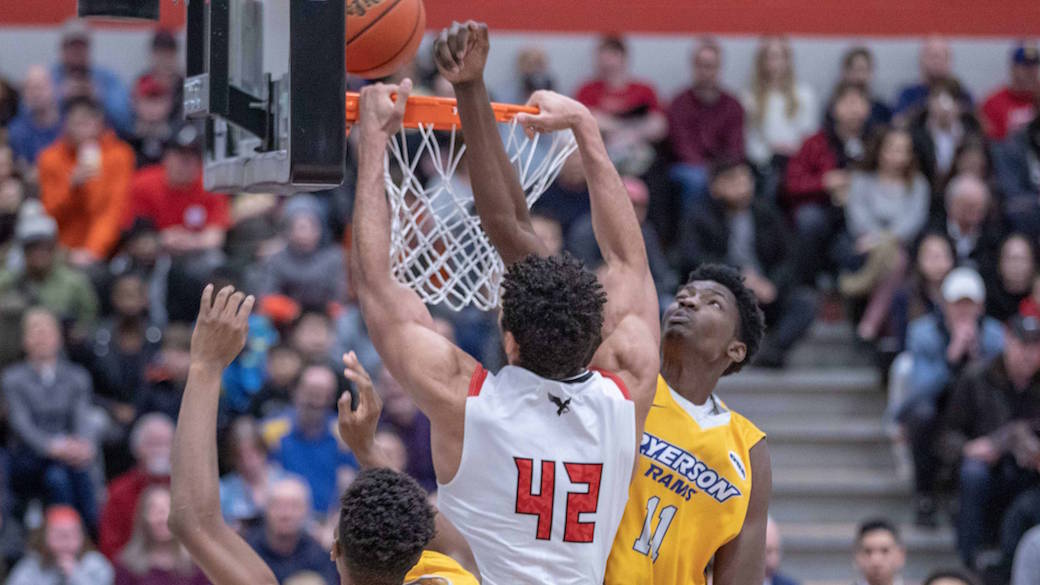 Ryerson had a stellar regular season, opening the 2018-19 campaign with a perfect 10-0 record in the fall portion of the schedule. The Rams dropped their first game to the No. 1 ranked Carleton Ravens, but then got revenge on their OUA rival by beating the Ravens in Ottawa later in the season. That win helped the Rams earn the No. 1 national ranking for only the second time in the team’s history.  The Rams went on to finish the season with a 21-2 record and breezed through the OUA quarterfinal over Ottawa and semifinal over the Laurier Golden Hawks to set up a rematch for the OUA Wilson Cup with the Ravens.  Ryerson’s offence is led by a stellar back court of JV Mukama and Myles Charvis who finished one-two in team scoring and were both named conference all-stars. 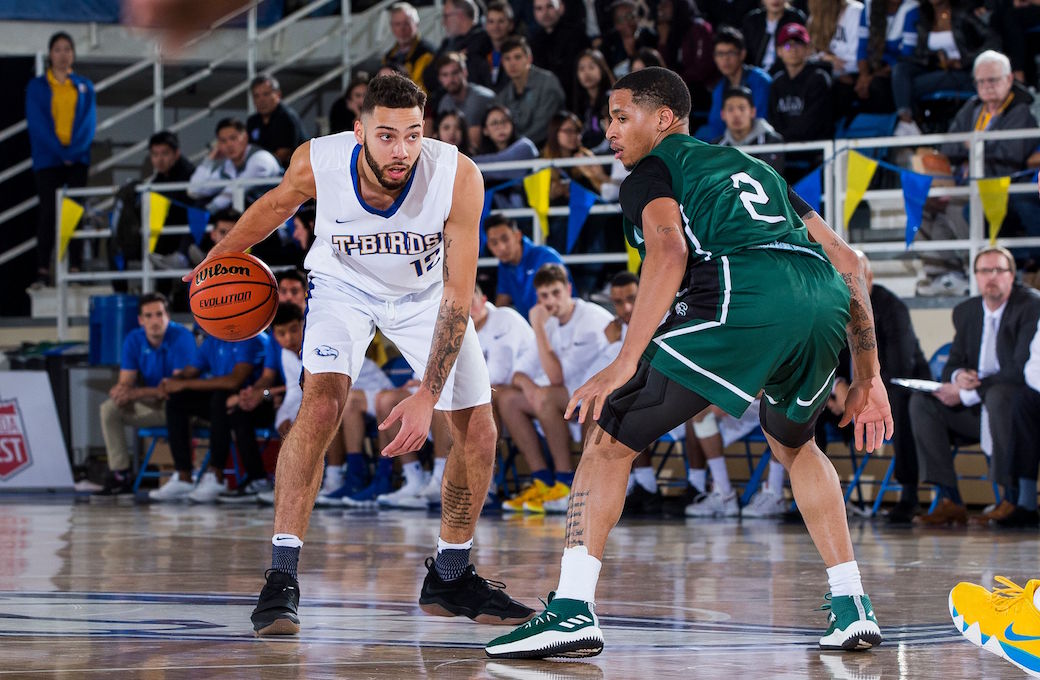 For the second-straight season, the UBC men’s basketball team finished 17-3 in Canada West conference play. The entertaining Thunderbirds scored 93.5 points a game, second in all of U SPORTS, and led the nation in rebounding with 49.1 per outing.

Jadon Cohee and Grant Shephard were both named Canada West all-stars. Cohee, an NCAA Div. I transfer, was fourth in the conference with an average of 19.3 points per game to gain a place on the first team. Shephard, a 2017 U19 world champion and 2018 Commonwealth Games silver medallist, earned second-team status after finishing with 16.2 points and 8.9 rebounds per game, while maintaining a .667 field-goal percentage. 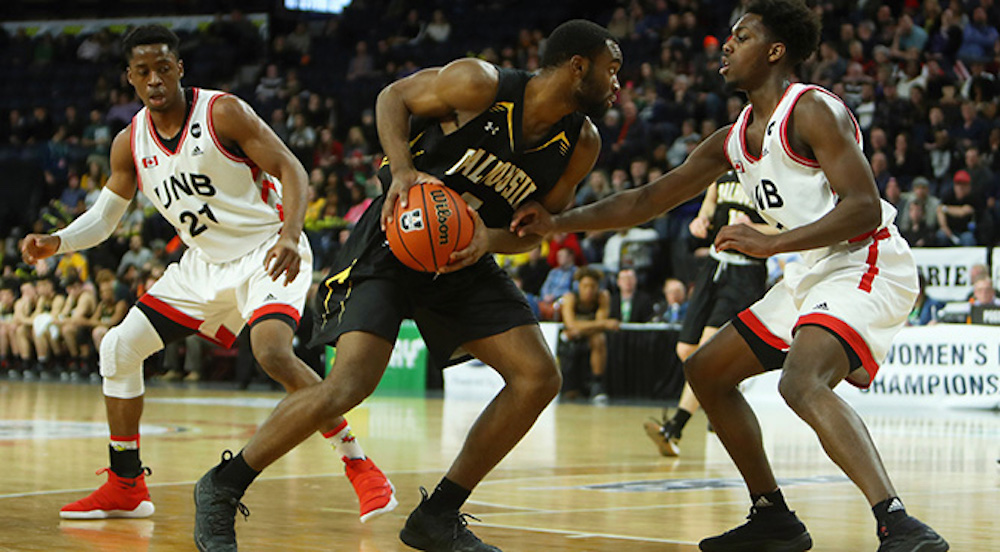 The Tigers went 8-1 in exhibition play to kick off their 2018-19 campaign. They earned another four wins in the first half of the regular season to have a 4-3 record heading into the holiday break. The Tigers had an amazing second half, winning 10 of their final 13 games and went on an eight-game winning streak to close out the regular season with a 14-6 record and third-place in the conference standings.

Ranked as high as fourth in the U SPORTS Top 10, the Tigers defeated the Memorial Sea-Hawks in AUS quarter-final action to face the UNB Reds in the semifinal round. After topping the Reds 81-75, they moved on to the conference championship to face the crosstown rival Saint Mary’s Huskies. The Tigers came out on top, winning 65-55 to win their fourth conference championship in five years. 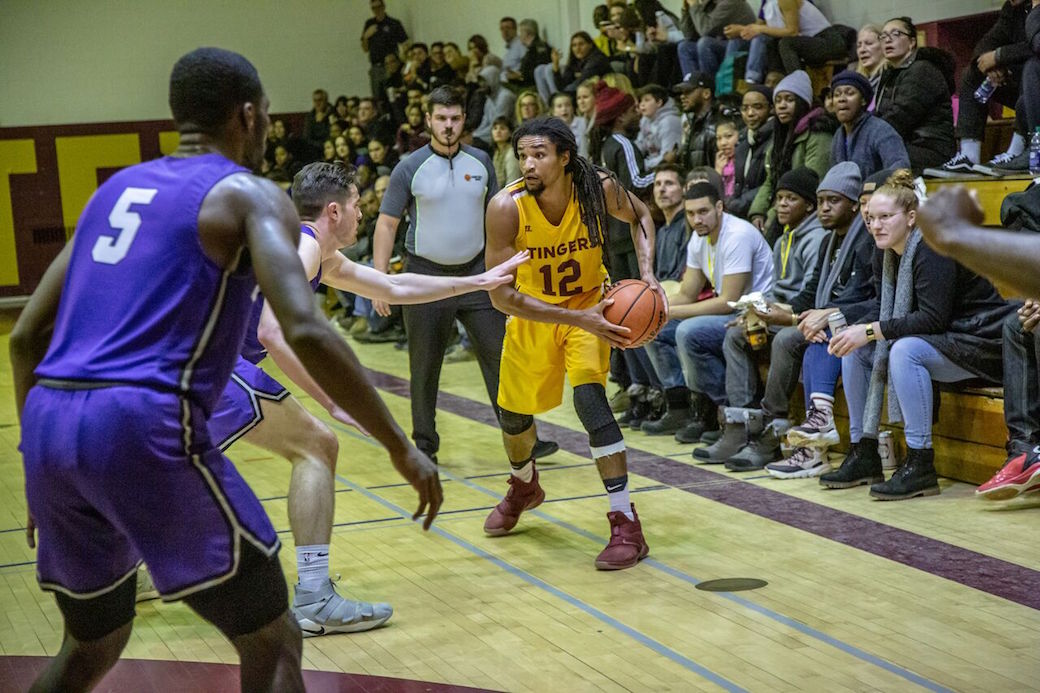 Under the guidance of RSEQ Coach of the Year Rastko Popovic, the Concordia Stingers won their first regular season championship and berth at the national tournament since 2011-12. The team finished in first place in the Quebec conference with an 11-5 record and spent six weeks ranked in the U SPORTS Top 10, peaking at the No. 8 spot.

Concordia relies heavily on RSEQ MVP Ricardo Monge, a fifth-year guard, to control the pace of the game and set up his teammates. His 5.5 assists a game ranks fifth nationally. The Stingers also look to Adrian Armstrong, a fourth-year guard and first team all-star, to give them a strong outside game. He leads the team in scoring with 16.4 points a game and is deadly from three-point range. 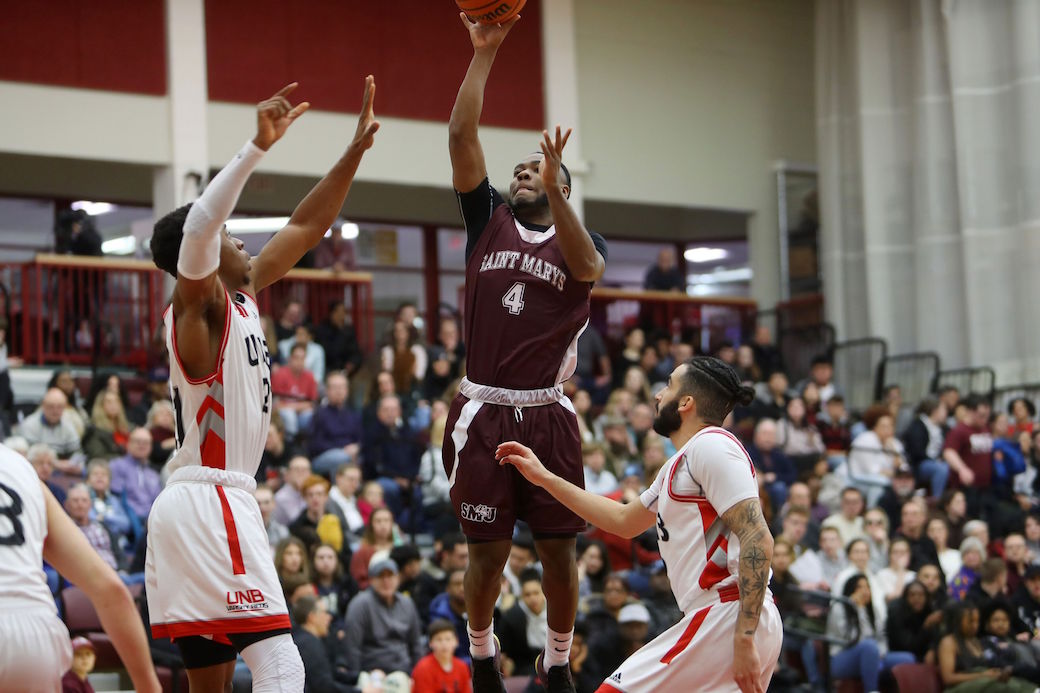 The Huskies finished the regular season with a 19-1 record and first place, scoring the most points in the AUS with 1,749 and their 1,440 points against were the fewest allowed all year.

The Huskies shot 44.1 per cent from the field and 32.9 per cent from three-point land while leading the AUS in free-throw shooting percentage with 75.7 per cent. SMU averaged 41.3 total rebounds, 15.1 assists and 6.8 steals per game, while topped the AUS with 87.5 points per game. The Huskies blocked 3.4 shots per game and allowed 72.0 points per contest.

In his seventh season, the Huskies head coach Jonah Taussig was named AUS Coach of the Year. 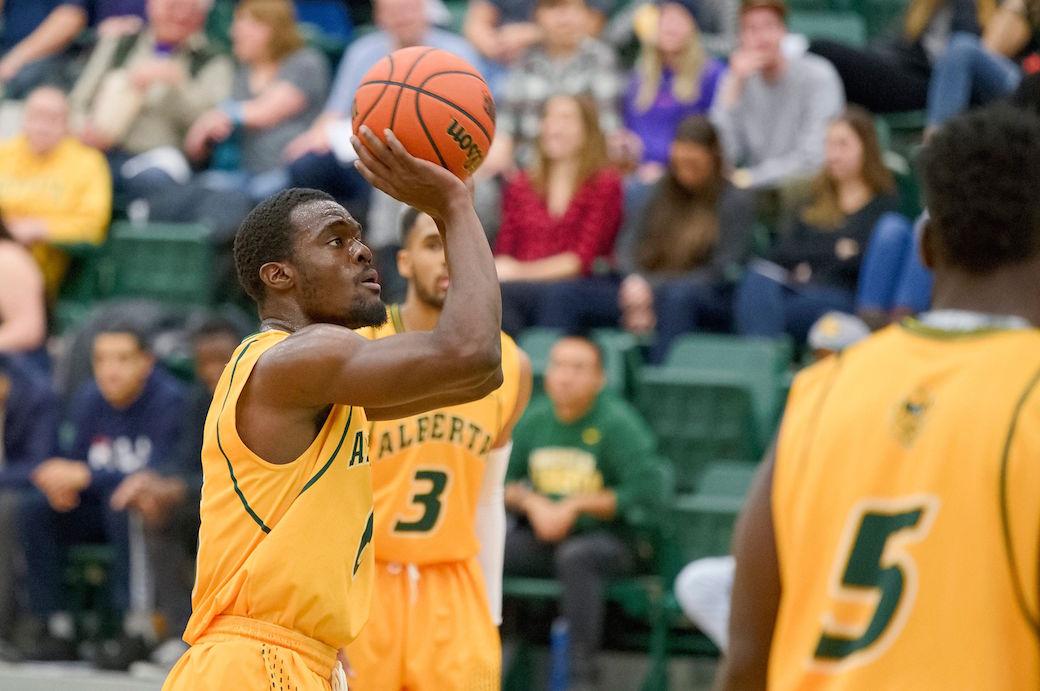 Despite a roster turnaround of nearly half their team, the Alberta Golden Bears return to the U SPORTS Final 8 for the third-straight time.

Led by three-time Canada West all-star Brody Clarke, the Bears finished second in the conference after the regular season with a 15-5 record. After dispatching the Pronghorns in the conference quarter-final, the Bears were upset at home by the No. 6 ranked UBC Thunderbirds in a three-game semifinal.

Clarke was once again the catalyst for the Bears at both ends of the court, finishing second in Canada West scoring 18.9 points per game, while leading the nation in rebounding with 11.0 per game.

With one of their youngest rosters under head coach Barnaby Craddock, the Bears will head to Halifax looking to get past the quarter-final round for the first time since finishing third in 2014.

The Man Behind the Title Shot: Dinos’ Mambi Diawara hungry for another national title