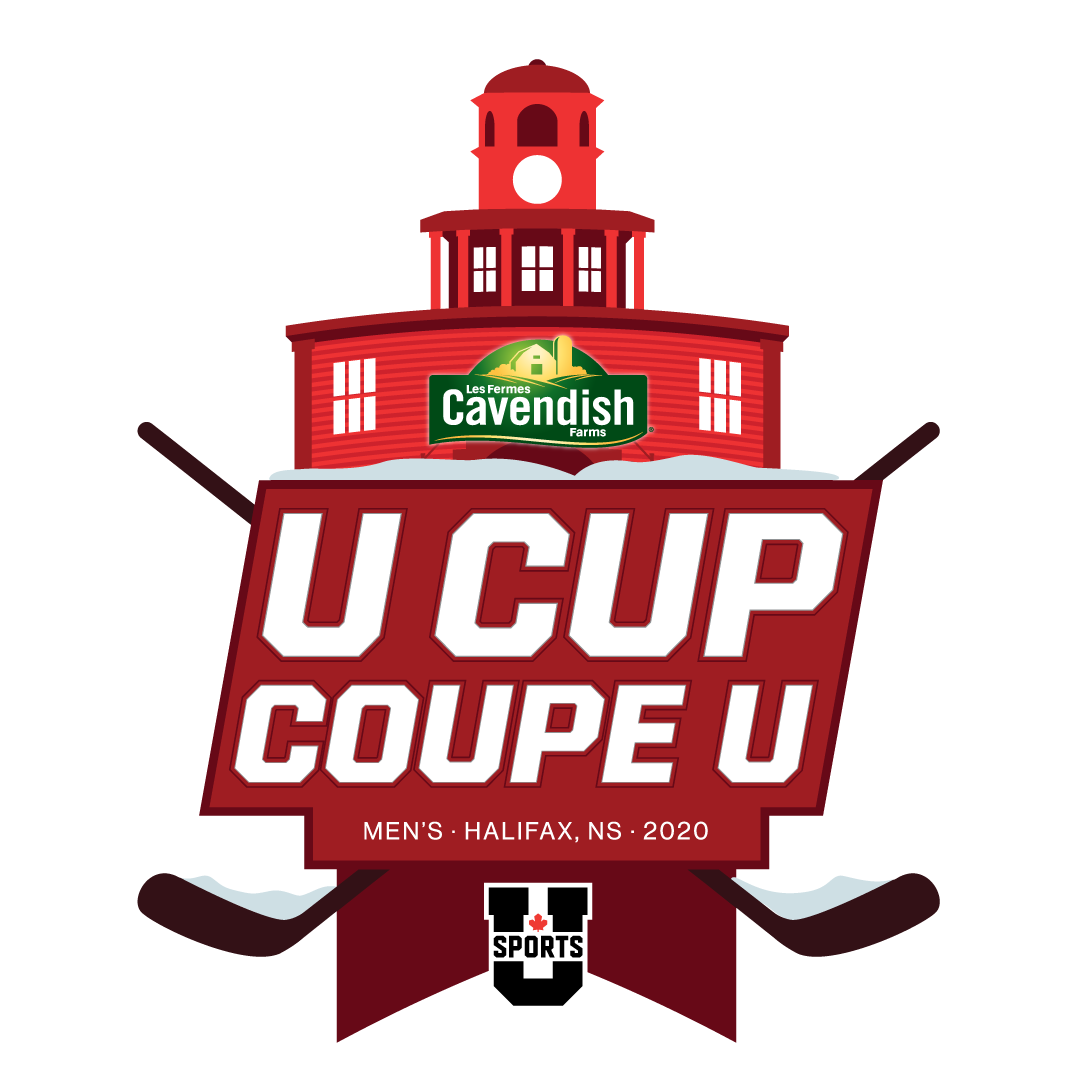 The UNB Reds were named tournament favourites on Sunday, as the seeding and quarterfinal matchups were announced for the 2020 U SPORTS Cavendish Farms University Cup.

The puck drops on the Men’s Hockey Championship, hosted jointly by the Acadia Axemen and Sports & Entertainment Atlantic (S|E|A) on Thursday and concludes Sunday with the gold medal game at 6 p.m. ET / 3 p.m. PT.

All games be played at the Scotiabank Centre, home of the Canadian Hockey League’s (CHL) Halifax Mooseheads. 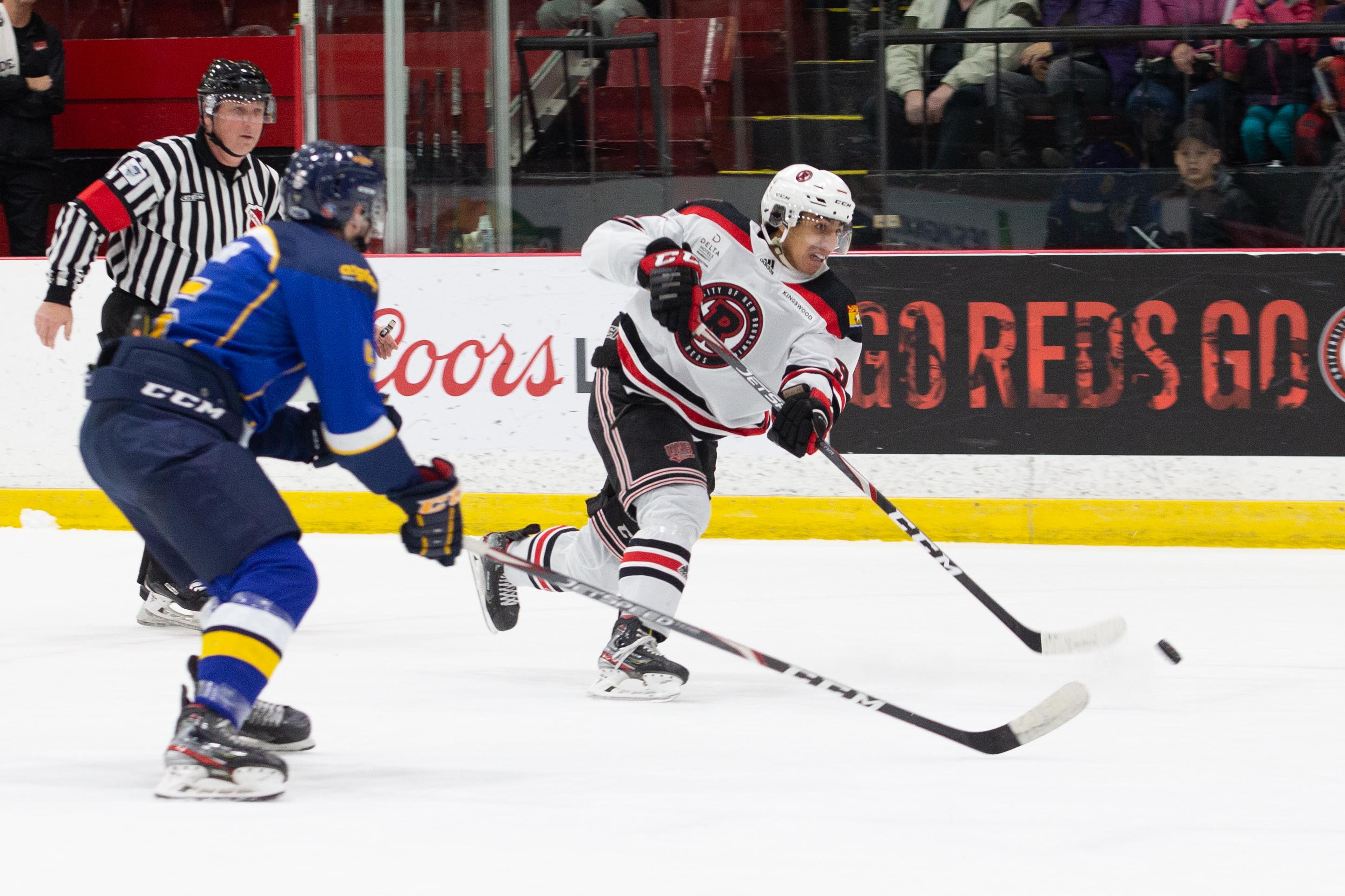 The defending University Cup champions went 26-4-0 during the 2019-20 AUS season, earning their 13th consecutive regular season championship and a first round playoff bye for the 14th straight year.

The Reds opened defence of their eighth national title with a convincing 9-3 road win, at Saint Mary’s, then celebrated their 2019 U Cup victory a week later, in a 4-0 win over Moncton in their home opener. The Reds' 13-4 first half saw was highlighted by a 10-0 rout of Dalhousie, on Nov. 22 - the 500th victory (including regular season, conference playoff and national championship play) for Reds head coach Gardiner MacDougall. UNB posted a perfect 13-0 record over the second half of the season, before dispatching Moncton in three straight games in the AUS semifinals.The Reds won their third consecutive AUS title, and 17th in program history, with a 2-1 series win over Acadia in the league championship series.

Reds forward Tyler Boland led the AUS and U SPORTS in scoring, while the goaltending tandem of Samuel Harvey and Rylan Parenteau posted the league’s best goals against average.
The Reds will arrive in Halifax not just as the defending national champions, but as winners of three of the last four University Cups. 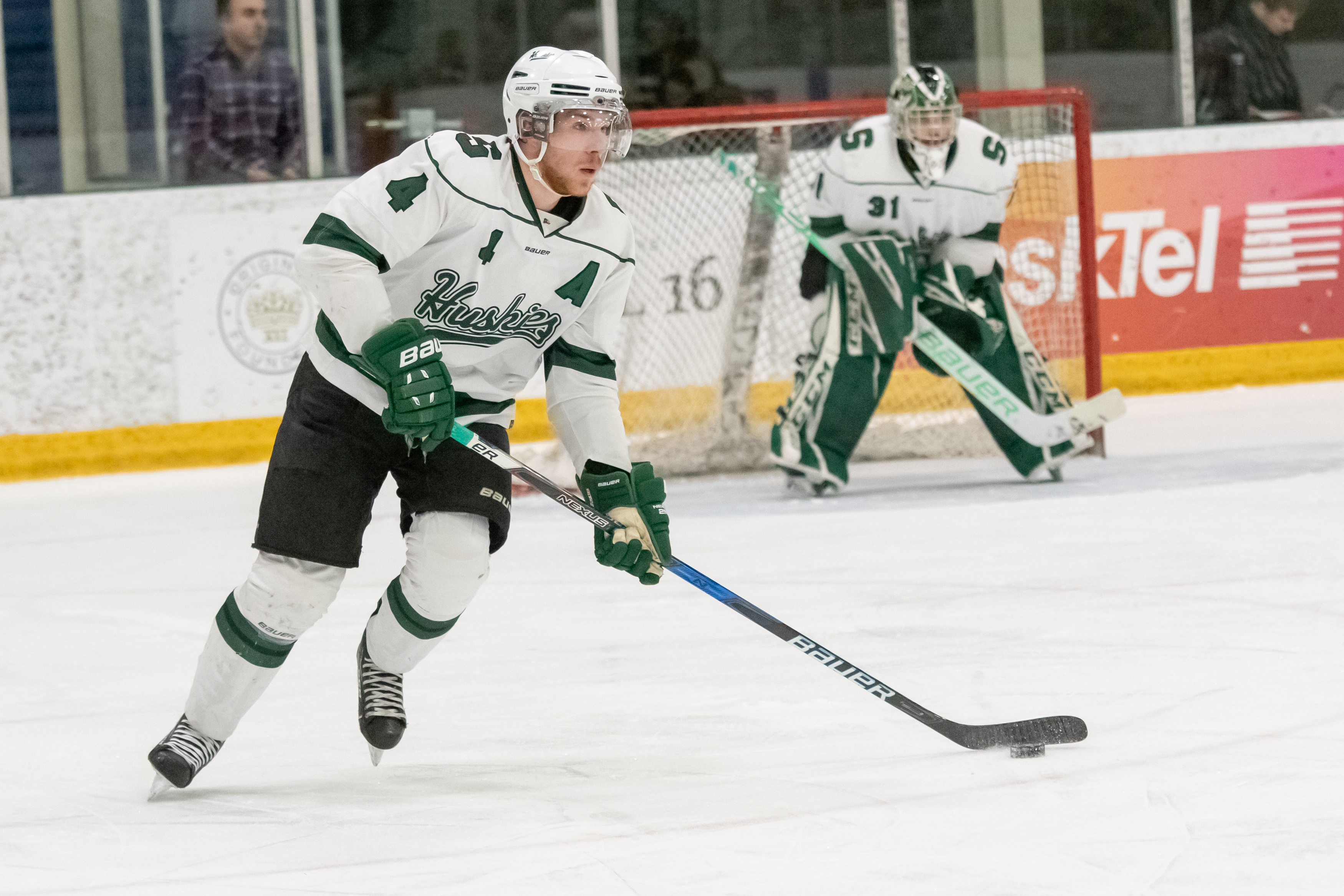 Making it back to the U SPORTS University Cup for the fifth year in a row, the Huskies are in search of a second national title in school history.

One of the hottest teams in the nation in the latter half of the season, Saskatchewan rebounded from an 0-3-1 start to win 19 of their final 20 games and have only lost once since Oct. 26.

The team claimed four of seven major awards at the conference level. Taran Kozun won both Player and Goaltender of the year, Levi Cable won the sportsmanship and ability award while Jared Dmytriw was named Rookie of the Year after leading the team in points.

The Huskies punched their ticket to Halifax with a sweep of the Calgary Dinos in the Canada West semifinals thanks to a double-overtime tally from Carson Stadnyk in Game 2, before sweeping the UBC Thunderbirds in two straight to claim the CW title. 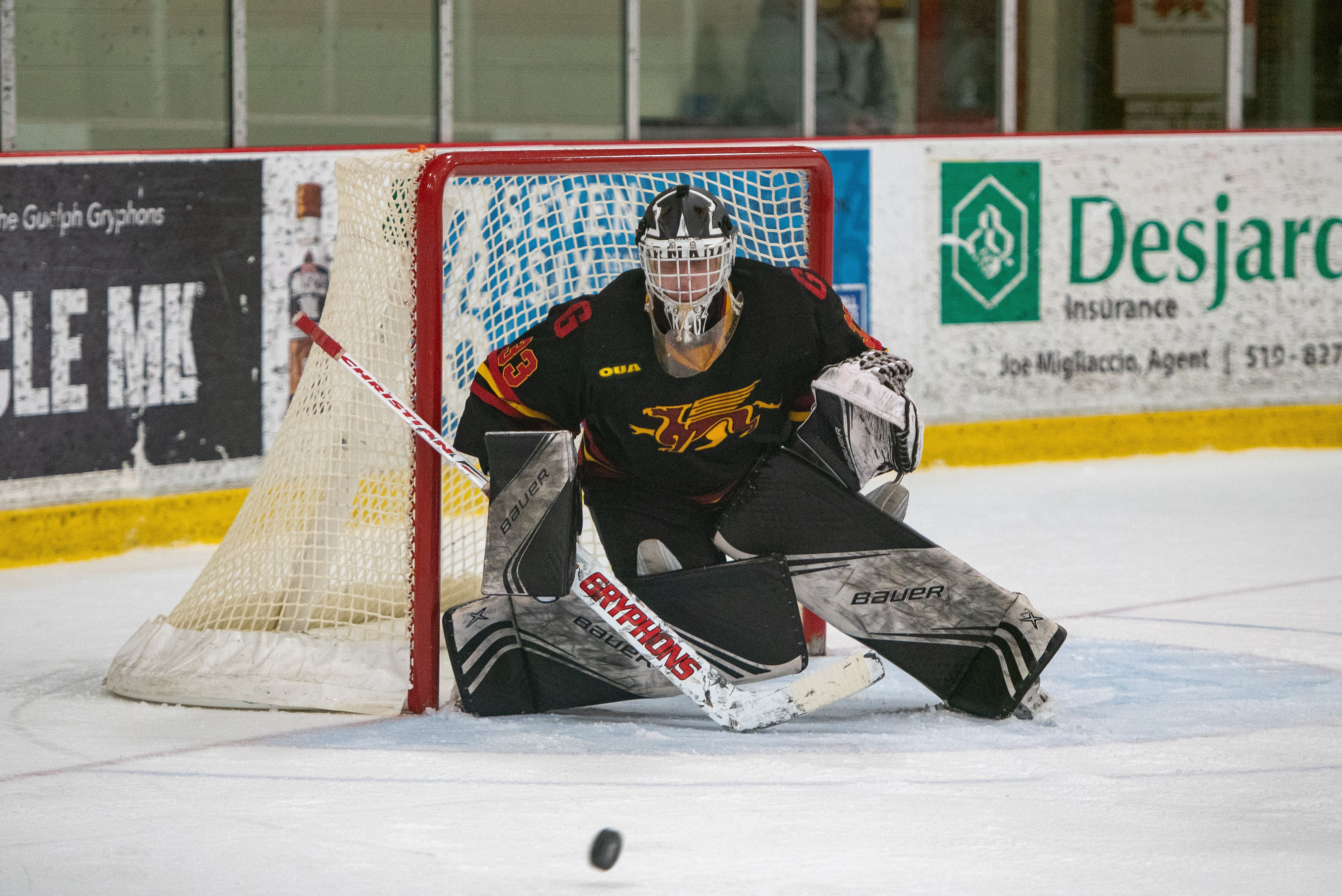 Guelph went 17-6-5 during the 2019-20 campaign, but as has been the case in recent history, found their groove as the playoffs got under way. The Gryphons were dominant offensively, pacing the conference in goals (127) and assists (228), while providing a potent power play (26.9 per cent, good for second in the league) that added to an already dangerous arsenal. Among those who contributed to the team’s lethal attack were former OUA West Rookie of the Year Todd Winder (16-23-39) and second-year forward Ryan Valentini (15-24-39). Veteran Andrew Masters and newcomer Brendan Cregan combined to take on the goaltending duties, with the first-year man finishing his 11 starts with a solid 8-3 record.

In the playoffs, Guelph took down Laurier in three games, before sweeping Brock, and going the distance against Western in an OUA West Final rematch. The Gryphons completed their quest for Queen’s Cup redemption against Ottawa, winning 2-1 in triple overtime. 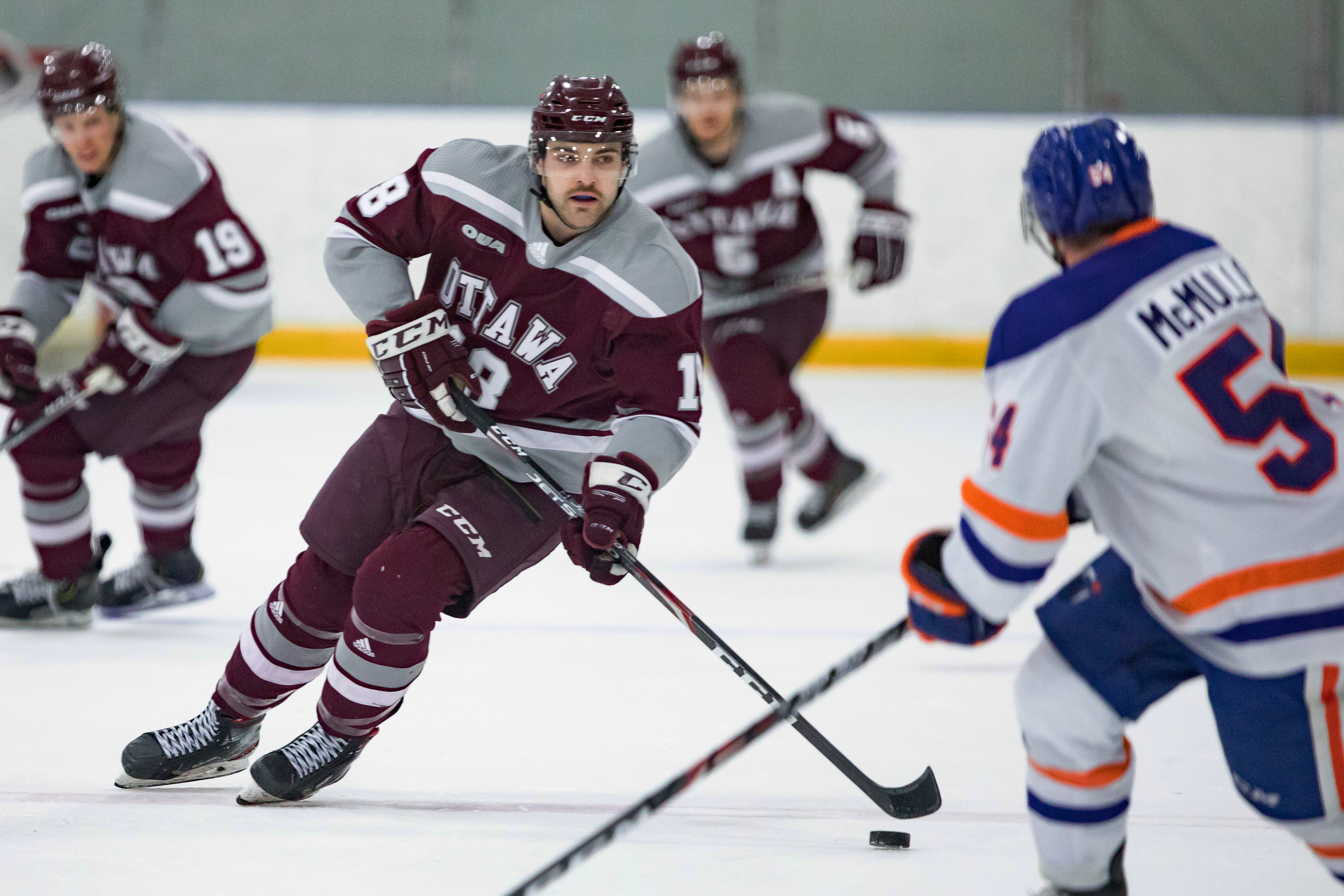 The Gee-Gees went 17-7-4, good for third in the OUA East. Ottawa was aggressive in both ends of the rink in 2019-20, registering a league-best 41.4 shots per game and employing a penalty kill that ranked second in the OUA with an 88.4 per cent success rate.

Head coach Patrick Grandmaitre’s team was led by senior forward Kevin Domingue, a consistent goal scorer who has never netted fewer than 16 in his four years in the nation’s capital. Domingue finished second in the conference with 18 goals (four of them game-winners) in the regular season before blowing up in the playoffs. The net was anchored by first-year Domenic Graham, who was posted a 10-4-1 record, but like Domingue, he has raised his game when it matters most. The Gee-Gees got to the University Cup by beating the Ontario Tech Ridgebacks and UQTR Patriotes in three games, before sweeping the Concordia Stingers in the OUA East Final. They went on to fall in the Queen’s Cup to the Guelph Gryphons 2-1 in triple overtime. 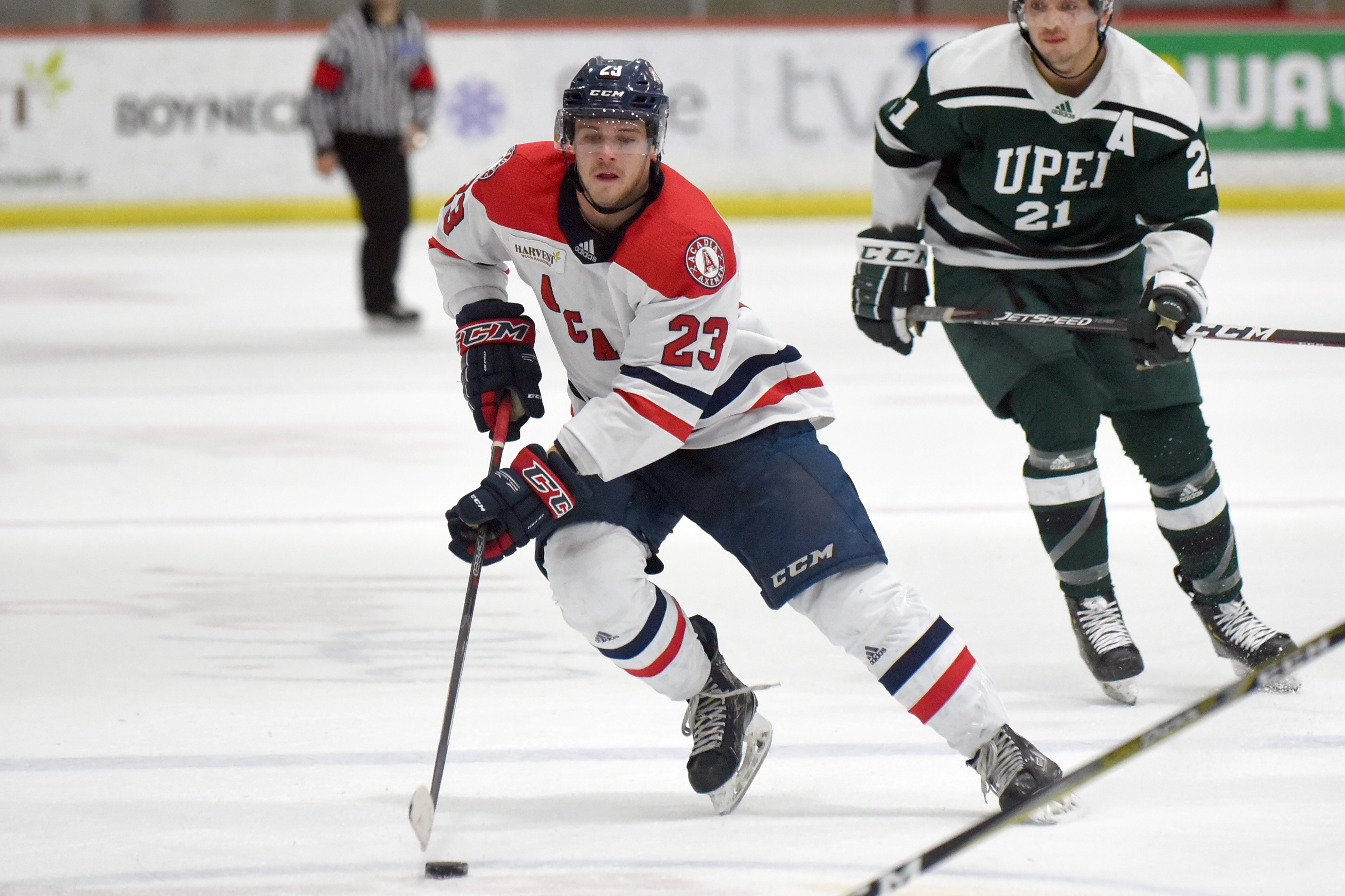 Despite playing a short bench through most of November with injuries plaguing the team, the Axemen wrapped up the first half of the season with a 14-4 record. Acadia placed sixth in the U SPORTS Top 10 rankings in December after a slide from fourth in early November. After persevering through the second half of the season, the team finished with a 19-9-2 record, clinching a bye to the semifinal along with conference leading UNB. Third-year forward Cristiano Digiacinto led the conference with 20 goals, while AUS All-Star goaltender Logan Flodell finished with the highest save percentage of the conference with 918.

The Axemen faced Saint Mary’s in the semifinal around and won the best-of-five series in four games to move on to the best-of-three series AUS Championship final against UNB, where they fell to the Reds in three games. 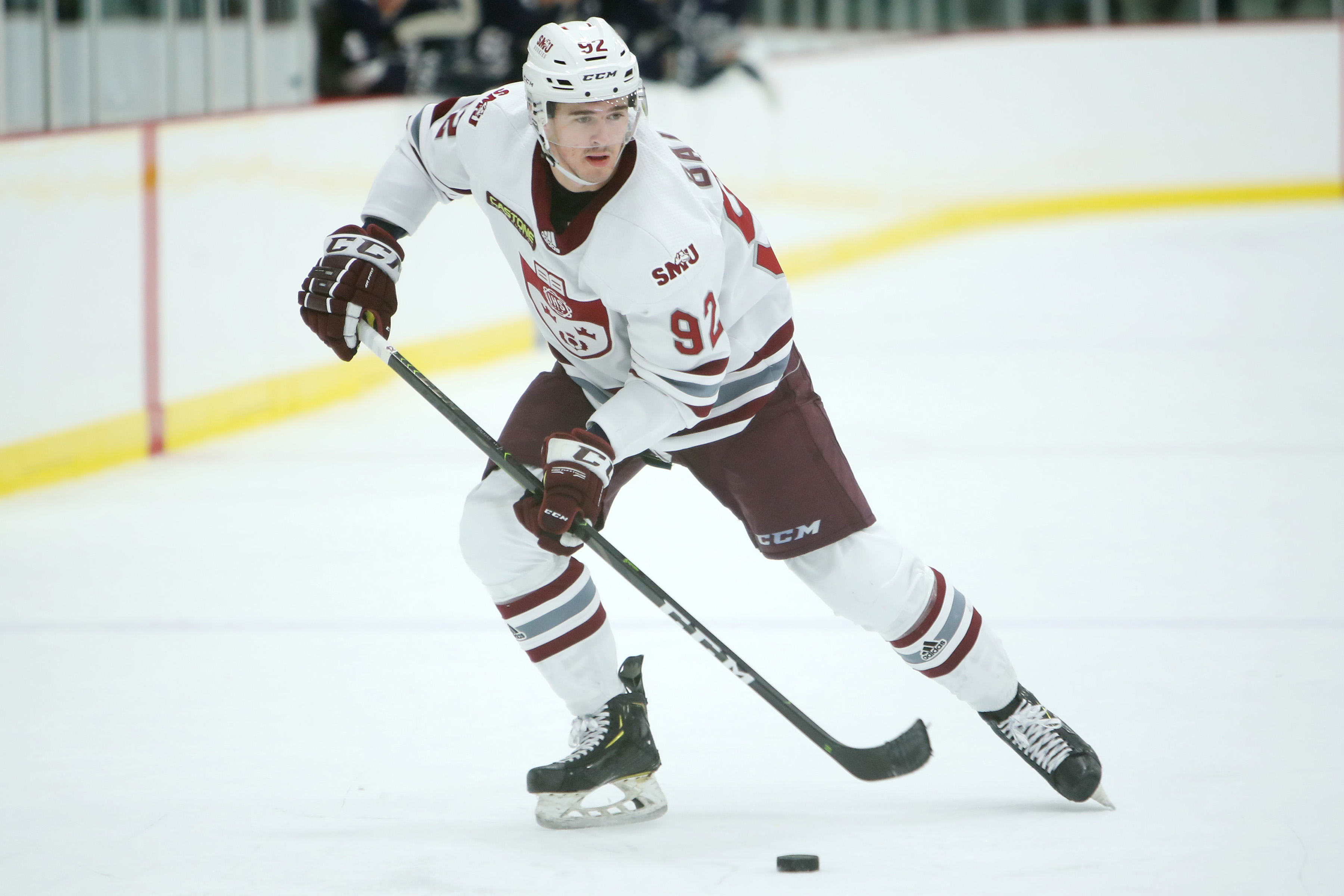 The Huskies enter the 2020 University Cup as one of the most offensively dangerous clubs from the AUS. Averaging nearly four goals per game during the regular season, Saint Mary’s has plenty of firepower in their arsenal.

The team finished the regular season in third place with a 17-12-1 record.

The Huskies can break open a game with their explosive speed and skill, while also embracing physicality. Head Coach Trevor Steinburg has instilled a never-say-die attitude in this group, which is most exemplified by fifth-year captain Anthony Repaci (Toronto, ON).

With stable goaltending by Eric Brassard (St-Hubert, Que.), and a well-balanced attack featuring a concoction of youth and experience, the Saint Mary’s Huskies will make some noise at the Scotiabank Centre. 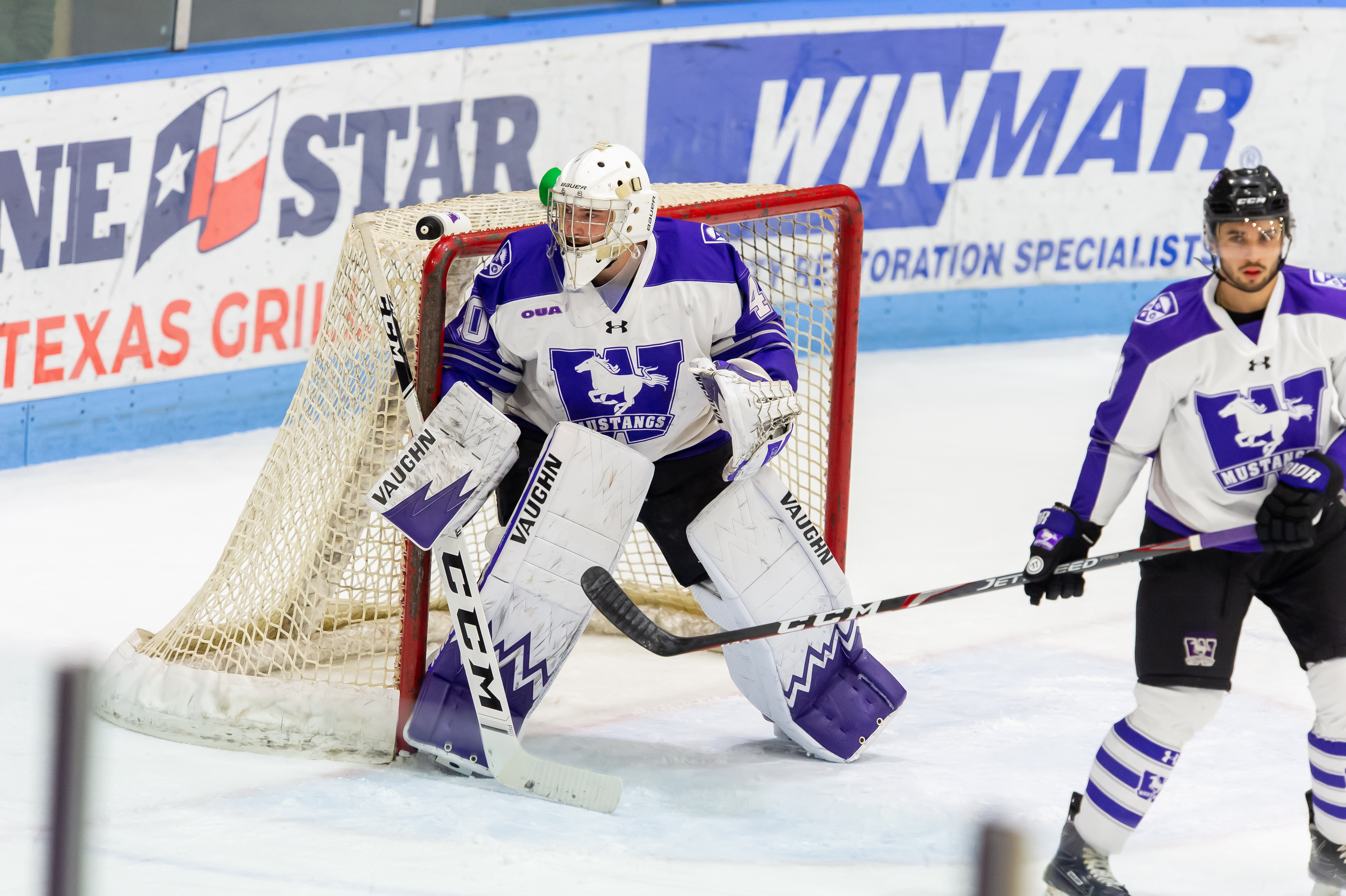 Western finished in eighth place in the 10-team OUA West conference with an 11-13-4 record, before going on a cinderella playoff run. The Mustangs eliminated the top-seeded Toronto Varsity Blues and the second-seeded Ryerson Rams, before falling to the Guelph Gryphons in Round 3 – with all three series going the distance.

The Mustangs then beat Concordia 5-2 on home ice to win the bronze medal and advance to the national championship. 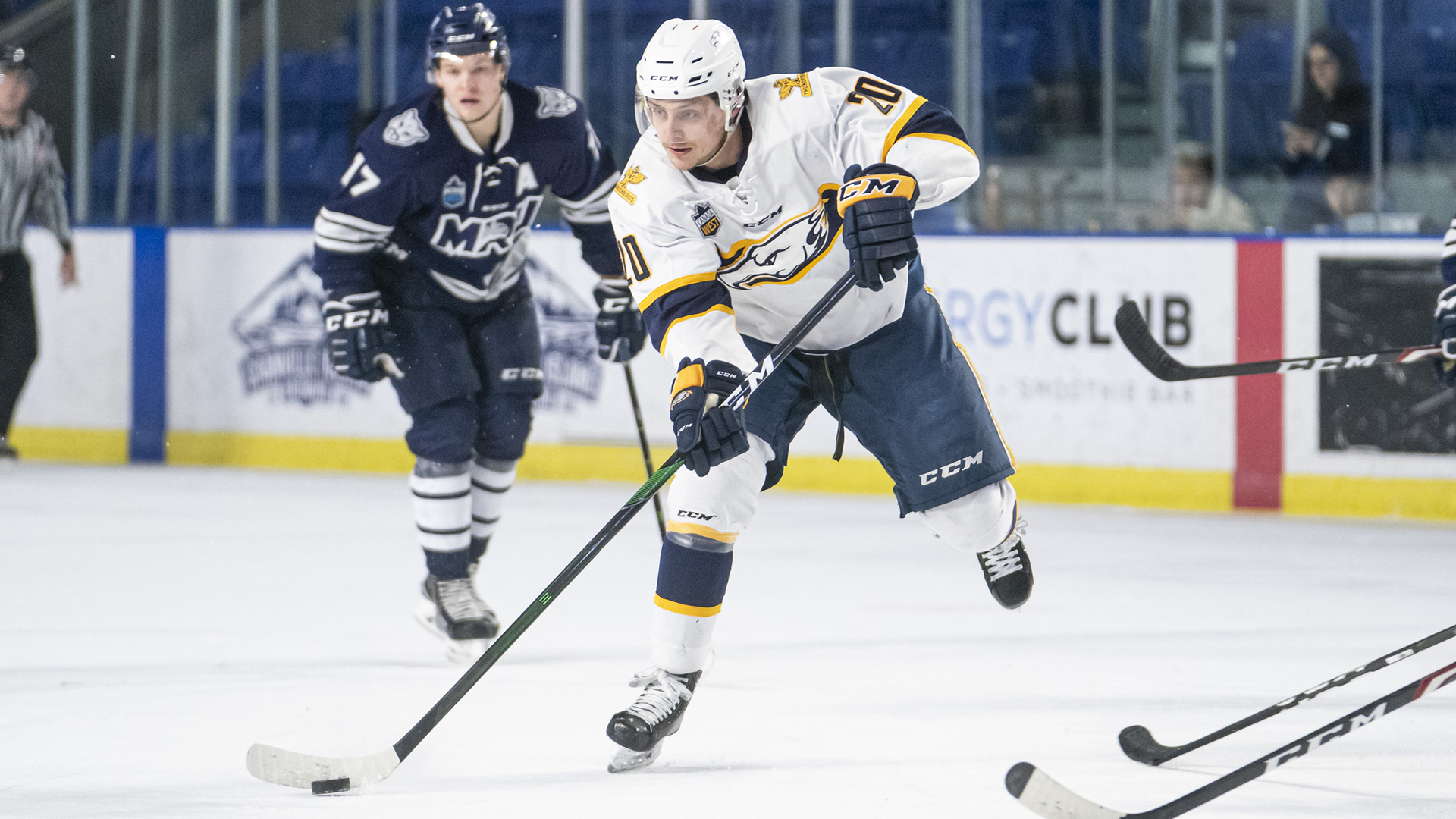 Sitting outside of a playoff berth in late January, the UBC Thunderbirds went on a late surge going 3-1 in their final four games to clinch a spot in the Canada West post-season for the ninth consecutive year.

Finishing with a regular season record of 9-14-5, the T-Birds claimed the conference’s fifth seed and headed to Calgary to face the fourth-seeded Mount Royal Cougars in the Canada West quarter-final where UBC won their first playoff round in six years.

The ‘Birds were up against all odds the following weekend in Edmonton where they faced the No. 4 ranked and top Canada West seed Alberta Golden Bears in the semifinal. Rylan Toth was the big story for UBC making a career high 51 saves in a 3-2 Game 1 overtime win. The Bears responded with a win in game two to push the series the distance where Toth was nearly unstoppable once again, making 40 saves as the ‘Birds took the deciding game 2-1 to advance to their first Canada West final since 1978 and their first University Cup appearance since 1977.