This weekend’s football slate is headlined by a conference battle between the top two seeds in Canada West. 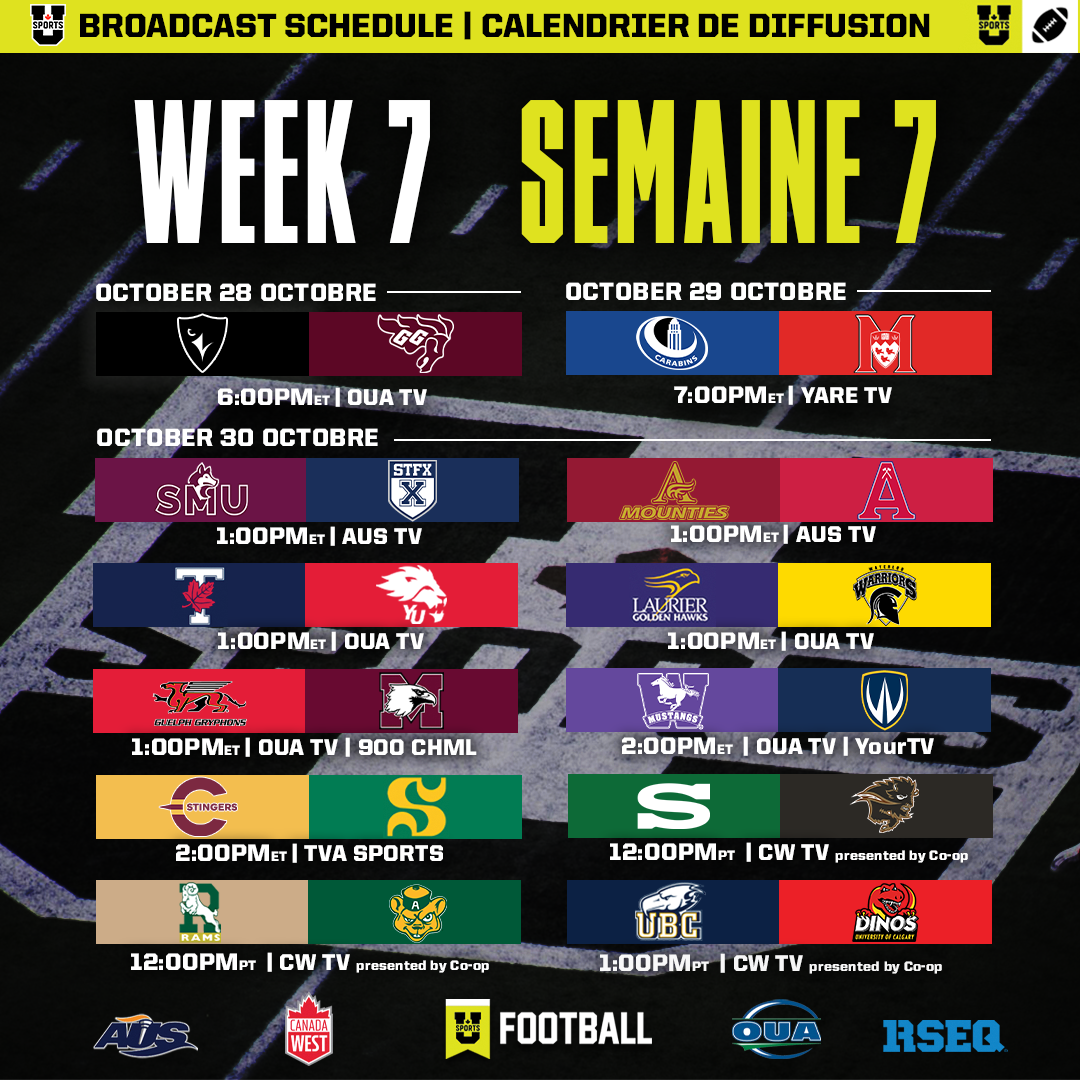 The Ottawa Gee-Gees emerged victorious with a 24-19 win over the Carleton Ravens on Thursday.

Second-year quarterback Ben Maracle had three touchdowns on the day with two though the air and one on the ground.

Maracle’s rushing touchdown came late in the fourth quarter to seal the victory for Ottawa.

The top-ranked Montreal Carabins will do battle with the McGill Redbirds to kick off RSEQ action on Friday night.

Montreal is coming off a decisive victory over the No.4 Laval Rouge et Or, where quarterback Jonathan Sénécal completed 19 of 29 passes for 350 yards through the air.

In AUS action, the No.9 StFX X-Men will host the Saint Mary’s Huskies who are coming off a bye week.

StFX is coming off a decisive 48-21 victory over the Bishop’s Gaiters. Quarterback Silas Fagnan had a monster game, completing 25 of 26 attempts for a 96 percent pass completion percentage. He had 321 passing yards and threw four touchdowns. Fagnan also rushed for a one-yard touchdown and had four rushes for 17 yards in the game.

The Mount Allison Mounties will look to finish the season strong against a stout Acadia defence on Saturday.

The Mounties, with a powerful defence of their own, will be led by defensive back Daniel Bell and linebacker Graeme Stevens who have combined for 49 total tackles through four contests.

In OUA action, the York Lions will host the Toronto Varsity Blues in their second tilt of the season.

The Varsity Blues took the first contest with a 32-2 victory in the 51st Red & Blue Bowl earlier in the season. The Lions will look to bounce back from their defeat to the Blues, wrapping up the season at home.

The No.8 Laurier Golden Hawks will travel to Waterloo for an important matchup with the Warriors.

Laurier is rolling as of late, winning their last two games. Their victory over the Lancers leaves the Golden Hawks in a prime position for the playoffs.

The No.7 Guelph Gryphons want to keep the momentum rolling against McMaster.

The Gryphons’ returner/receiver, Clark Barnes, will certainly draw ample attention from the Marauder defence. Barnes recently ran back a return of 108-yards on route to U SPORTS Special Teams Athlete of the Week honours for his performance in Guelph’s final home game.

The No.2 Western Mustangs are visiting the Windsor Lancers in hopes of capping off the regular season on a high note.

Western is coming off a commanding 48-13 victory over the Waterloo Warriors, while Windsor dropped their last game to a surging Laurier squad.

The Concordia Stingers will visit the Srehbrooke Vert et Or this Saturday.

Concordia’s quarterback Olivier Roy leads U SPORTS with an average of 321.6 yards per game and 17 passing touchdowns.

In Canada West, the top two teams face off as the Manitoba Bisons play host to the Saskatchewan Huskies.

The Bisons are coming off their first defeat of the season after a close battle with the UBC Thunderbirds.

The Huskies will rely on their star quarterback, Mason Hyhus is averaging 321 passing yards per game.

The Regina Rams will visit the Alberta Golden Bears this Saturday, looking to quarterback Josh Donnelly for offensive support.

Donnelly has eight touchdown passes through three games played for the Rams.

The No.10 Calgary Dinos will play host to the UBC Thunderbirds this Saturday.

UBC is coming off a stellar come-from-behind victory over No. 6 Manitoba Bisons, while the Dinos look to get back into the win category after a close defeat to the Alberta Golden Bears.