The Dalhousie Tigers had big plans to bring home a national championship medal, but the Alberta Pandas had other plans. Not on their home court.

Alberta may have been heartbroken over their semifinal loss, but they shelved their pain and put forward a gritty, hard-fought come-from-behind five-set (19-25, 25-22, 20-25, 25-14,15-11) victory to claim the bronze medal, Sunday night at the Saville Community Sports Centre.

Third-year outside hitter Kory White set a new single-game playoff kills record by a Canada West player with 33, while third-year middle Vanessa Jarman chipped in with 12 kills in the win.

Sophomore outside hitter Julie Moore led Dalhousie with 16 kills in the loss.

“We didn’t like the way it felt last night the way we played. We found ourselves in this match, and I’m super proud,” said Pandas head coach Laurie Eisler. “We’ve got a good fight instinct, but it just took awhile for us to tap into it. Once we had our backs against the wall in the fourth set, we just started to relax and play. We know how much we care, but you got to play like you don’t care sometimes. 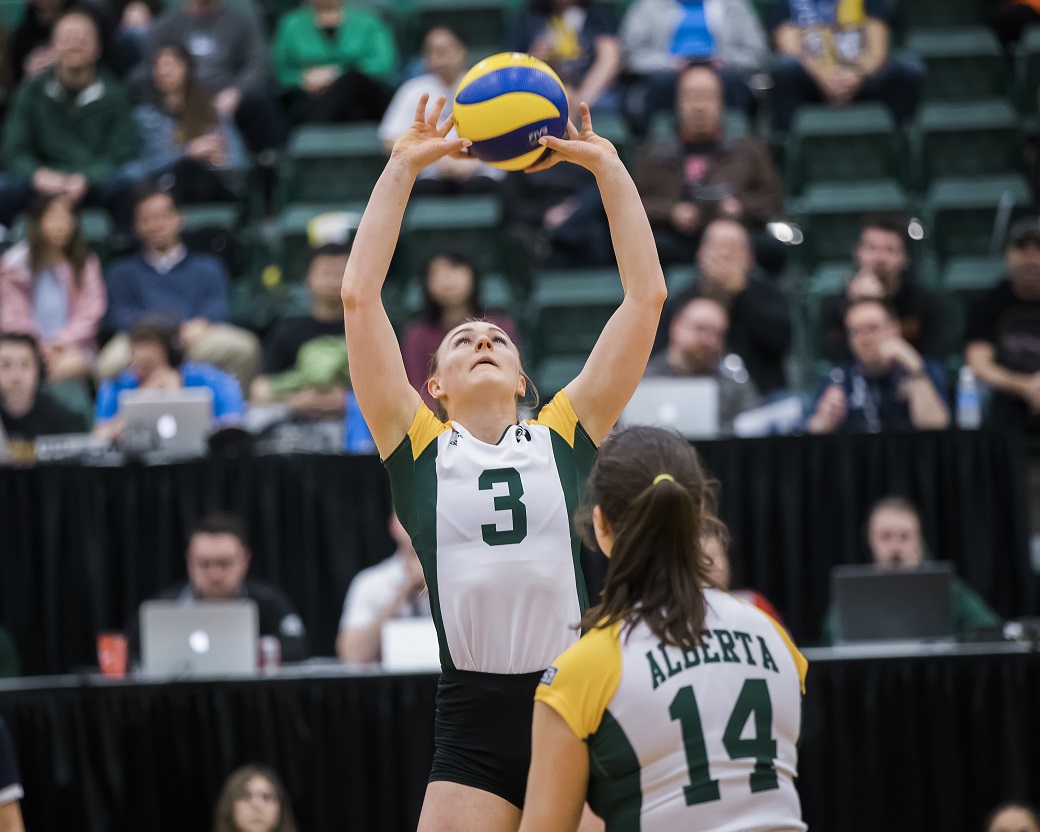 “We chose to deny our emotions last night. The pain of yesterday’s loss was still here today. We wanted to be in the gold medal match. The team showed a lot of toughness today and we knew how badly (Dalhousie) wanted it, and we weren’t going to get outfought in our own gym.”

Alberta looked like a team still dealing with the sting of their defeat on Saturday and Dalhousie jumped all over them in the opening set. But White and the Pandas started to find their stride in the second set and came through with a tight 25-22 set win.

But some of the struggles in their loss against Ryerson, started to creep back in their game. Dalhousie served Alberta tough, forcing the Pandas into some deep holes, particularly in the third set.

White had 18 kills after the third set loss, but then exploded for 10 more in the fourth set, and on the game-winning point, she broke the conference record of 32 held by former Panda Tiffany Dodds and equaled by UBC’s Kiera Van Ryk in their tournament-opening win over Trinity Western on Friday. 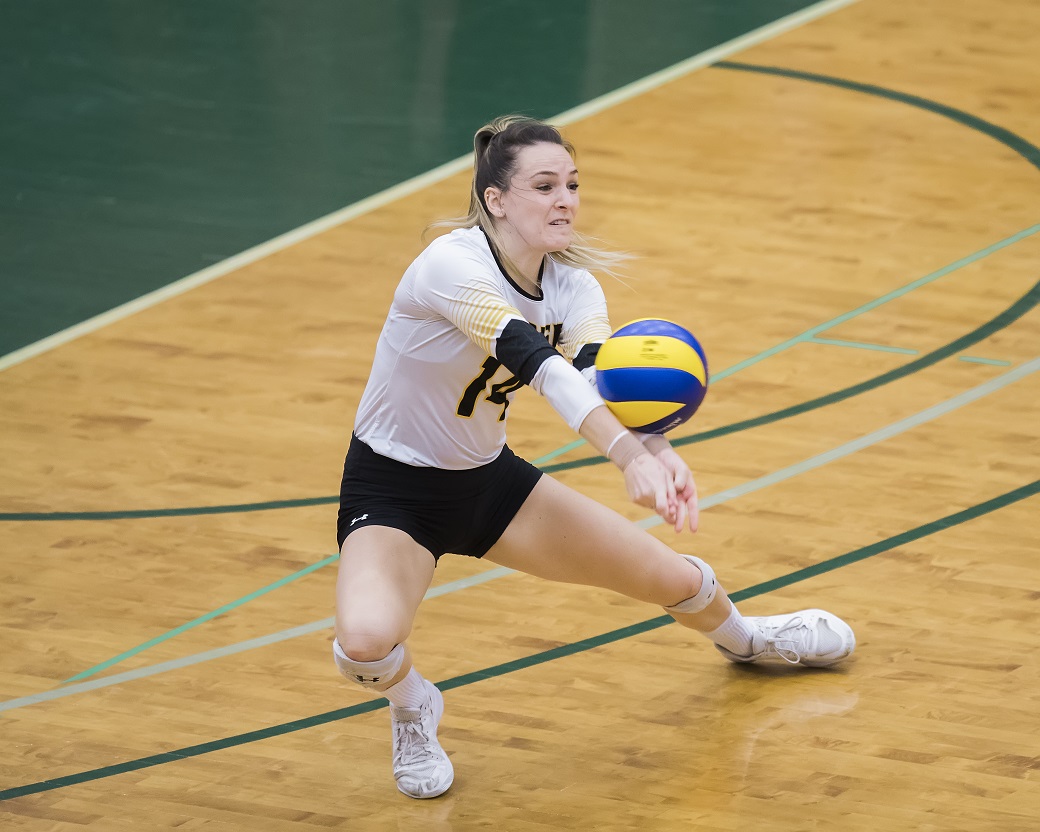 “I said to (setter) Mariah (Walsh) at one point in the match – I think we had 15 points in the fourth set – and I said to her ‘We need another 25 points, I don’t care how you get them, if you have to continue to go to Kory White, do it. We’re not saving anything now,’” said Eisler.

Walsh did, and the dynamic duo just simply couldn’t be stopped. Alberta won the fourth set decisively and they led from start to finish in the final set.

“Mine and Mariah’s connection was the best we had the whole season. We were staring at each other and just telling each other we needed to get the job done,” said White, who recorded 81 kills in the tournament.

“I’m so proud of my team. It’s hard to come back after such heartbreak. We’re all physically tired, but we all knew we had to come back and beat that mental part after a loss and push our emotions aside and stay focused. 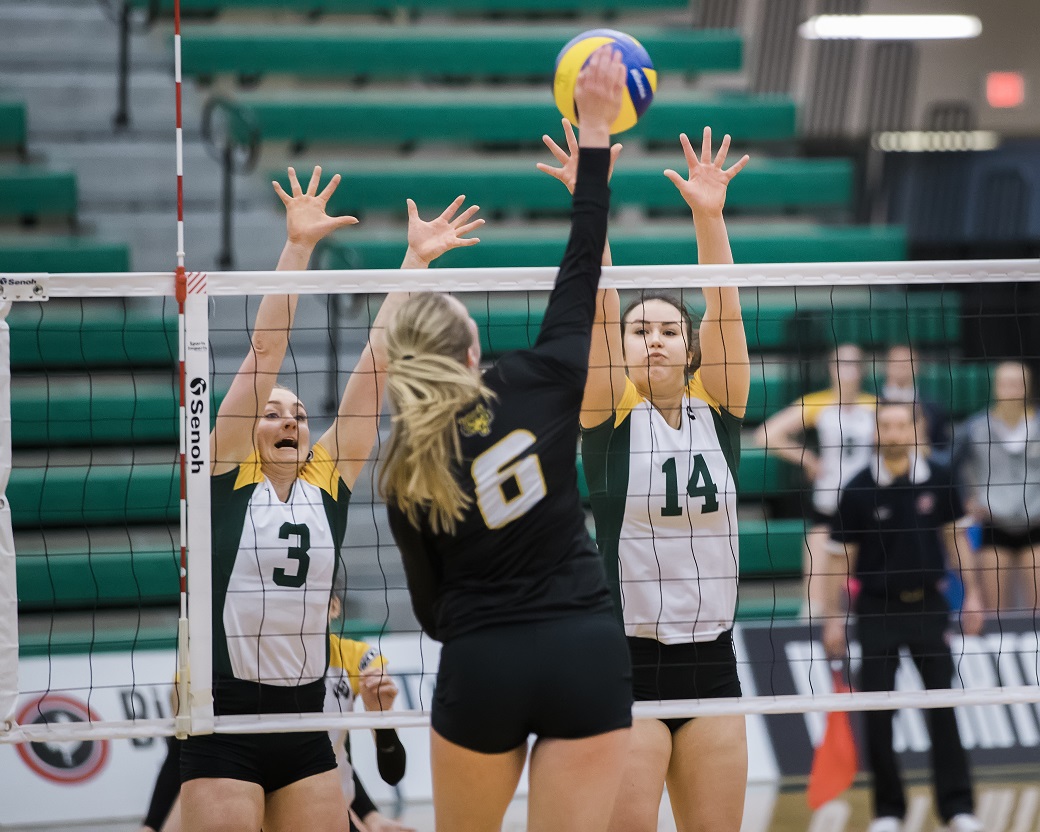 “We looked at each other and just said, ‘This is our season on the line. We have to pull whatever you have together and bring it.’ The light bulb came on and everyone was playing for someone. It was just awesome.”

The loss stings for Dalhousie. They had Alberta on the ropes and came so close to knocking off the perennial national championship contenders on their home court, but they just simply didn’t have the answers against the Pandas in the final two sets — particularly, White.

“Our team laid it all on the line, we just needed to make a few more plays late. To come here and beat Montreal and got toe-to-toe with these (UBC and Alberta) teams. It says a lot about our team and program,” said Tigers head coach Rick Scott.

“We couldn’t stop Kory White. We needed to slow her down. We knew she was a going to get her kills, but we couldn’t give up that many. We did a real good job on some of their other players, but Kory was the difference in that match.

“We wanted that bronze medal, but I’m so proud of them. We opened up a lot of eyes this weekend. We showed we’re a damn good volleyball team.