Throughout the course of her U SPORTS career, Maxine Murchie has made a name for herself as a part of the Wilfrid Laurier Golden Hawks women’s soccer team.

But in August, Murchie will trade in purple and gold to compete in red and white for Team Canada at the 2017 Summer Universiade in Taipei City, marking her first appearance on the international stage. Under head coach Peyvand Mossavat, the bench boss of the University of Ontario Institute of Technology (UOIT) Ridgebacks, Murchie will represent her country alongside 19 other top female soccer players from across the nation.

“Words cannot describe how excited I am to have the opportunity to play for my country this summer in Taipei,” Murchie says of the fast-approaching FISU Games, the second-largest multi-sport event in the world. “The challenges, the hard work and most of all, the competition, are what excite me the most about these next few weeks”

The Kitchener, Ont., native is no stranger to the pressure of high level competition, which will undoubtedly greet her in Taipei. As she enters her fifth and final year with the Golden Hawks this fall, Murchie’s diverse experiences as a North American varsity athlete has equipped her with a competitive edge that is an unmistakable on the field.

Upon graduating from Pere-Rene-de-Galinee high school in Kitchener, Murchie enrolled south of the border at the University of Central Florida (UCF), and played at midfield for the women’s soccer team during the 2012-13 season.

“Attending the University of Central Florida was an amazing experience and I am so glad I was able to be a part of the women's soccer team and play at such a competitive level,” says Murchie of her time as an NCAA athlete.

After a year at UCF, Murchie found herself facing a predicament that almost all young university students are confronted with: The question of whether life over 1,000 miles from home was truly for her.

Adding to her reservations about returning to UCF for a second year, was the announcement that Amanda Cromwell, the head coach of the women’s varsity soccer team at UCF, had decided to accept a coaching position at the University of California, Los Angeles (UCLA).

“I was incredibly happy for her but also very upset that I would be losing one of the best coaches I ever had,” says Murchie of the pivotal moment in her varsity soccer career.

All factors considered, Murchie decided that the best decision for her journey as a student-athlete was to head north, returning to her hometown and enrolling at Wilfrid Laurier University where she joined the Golden Hawks under head coach, Barry MacLean.

“I decided to transfer to Laurier for a few different reasons. I wanted to continue playing soccer at a competitive level and the women's soccer program at Laurier is very strong,” says Murchie. “I was also very attracted to Laurier because of the academic programs that are offered. I was very interested in the School of Business and Economics and I am currently enrolled in the economics program.” 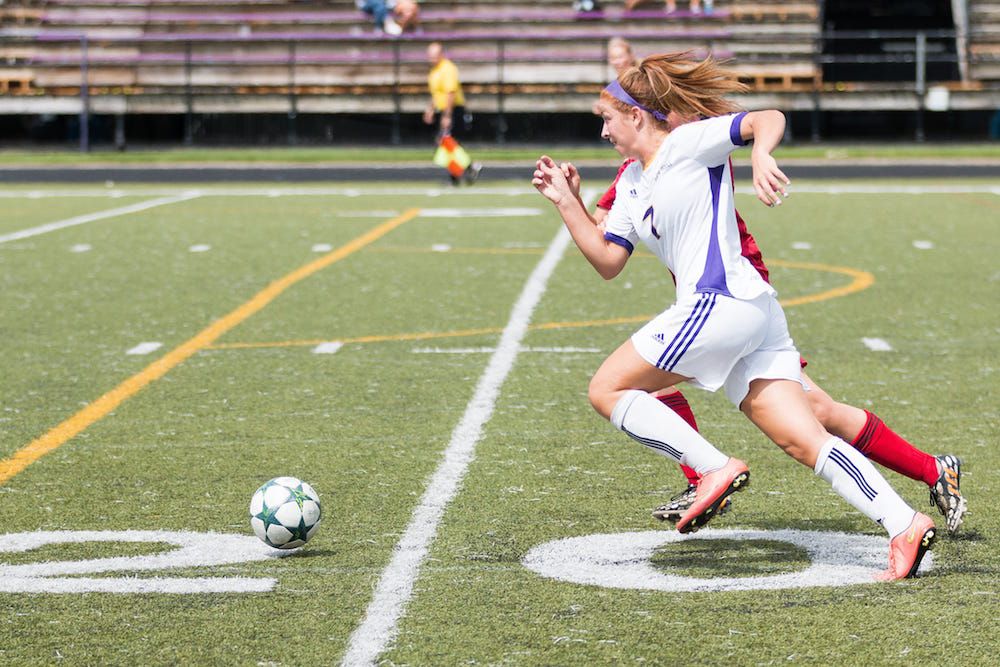 Murchie first took to the field sporting the Hawks logo for the 2014-15 season, after having to sit out for a year due to U SPORTS requirements for NCAA transfers.

Immediately, she made her mark on the team.

In her first year with the Hawks, the midfielder scored 12 goals on 61 shots, good for eighth and second in the nation, respectively.

Despite an injury that kept her on the sidelines for part of the 2015-16 season, Murchie assisted in Laurier’s successful playoff run, where they earned an OUA silver medal, before falling in the quarter-finals in the U SPORTS Women’s Soccer Championship

While still battling through injury for some of the 2016-17 season, Murchie transitioned to forward and was a distinctive presence up front for the Hawks. During the regular season, she tallied four goals and four assists, tying her for the sixth-most helpers in the conference. Murchie also had a game-high three shots in Laurier’s OUA quarter-final loss to Guelph.

When reflecting on her successes as a Golden Hawk athlete, Murchie gives credit to MacLean, whose unwavering support has helped shape her into the player she has become, and has guided her to the international stage that stands before her.

“Barry has taught me a tremendous amount as a player,” says Murchie. “He has guided me throughout my varsity experience and has helped me recognise my strengths and weaknesses as a player. He has shown me how to properly utilize my strengths on the field and how to improve on my weaknesses.

“This has certainly helped me while trying out for Team Canada, as I was better prepared to compete for a position on the team. As well, it will help me in Taipei while playing against some of the best varsity players in the world.”

"Maxine is a dynamic attacking threat who has the ability to create and score goals,” adds MacLean. “(She) should be a premiere player in the 2017 Summer Universiade.”

As a seasoned veteran of the sport, Murchie will look to help Canada earn their first women’s soccer medal at a Summer Universiade, after a team-best fourth place finish at the 2015 FISU Games.