Canada’s men’s basketball entry got off on the right foot at the 30th Summer Universiade in Italy Thursday night, dropping host Italy 96-70 at Palasport Del Mauro in Avellino.

It was a night that featured a little bit of everything: big runs on both sides, a hostile crowd, a near-comeback, and finally a Canadian victory.

“I’m pleased with the way they played,” said Shawn Swords, the Canadian head coach. “We knew they would make a few runs based on the energy of the crowd, and they certainly did, and I liked the way our guys handled it. We were able to execute offensively and really execute some possessions defensively during those tough times.

With a partisan crowd behind the azure-clad home side, Italy stormed back in the late stages of the third quarter and early in the fourth. A lead that had been as high as 23 was cut down to just six at 71-65 early in the fourth quarter, but Canada found another gear when the heat was on. The team of U SPORTS stars embarked on a 21-0 run, quieting the crowd and taking the win to improve to 1-0 in Group D action.

“We’ve been waiting to break out a little bit here,” said Alberta forward Brody Clarke, who finished the night with 13 points. “It was time we started showing some pride and some hunger, and down the stretch that’s what I thought came out of us. Guys just came in with the right mindset. It’s a game of runs – they made their run, and we were able to answer back. 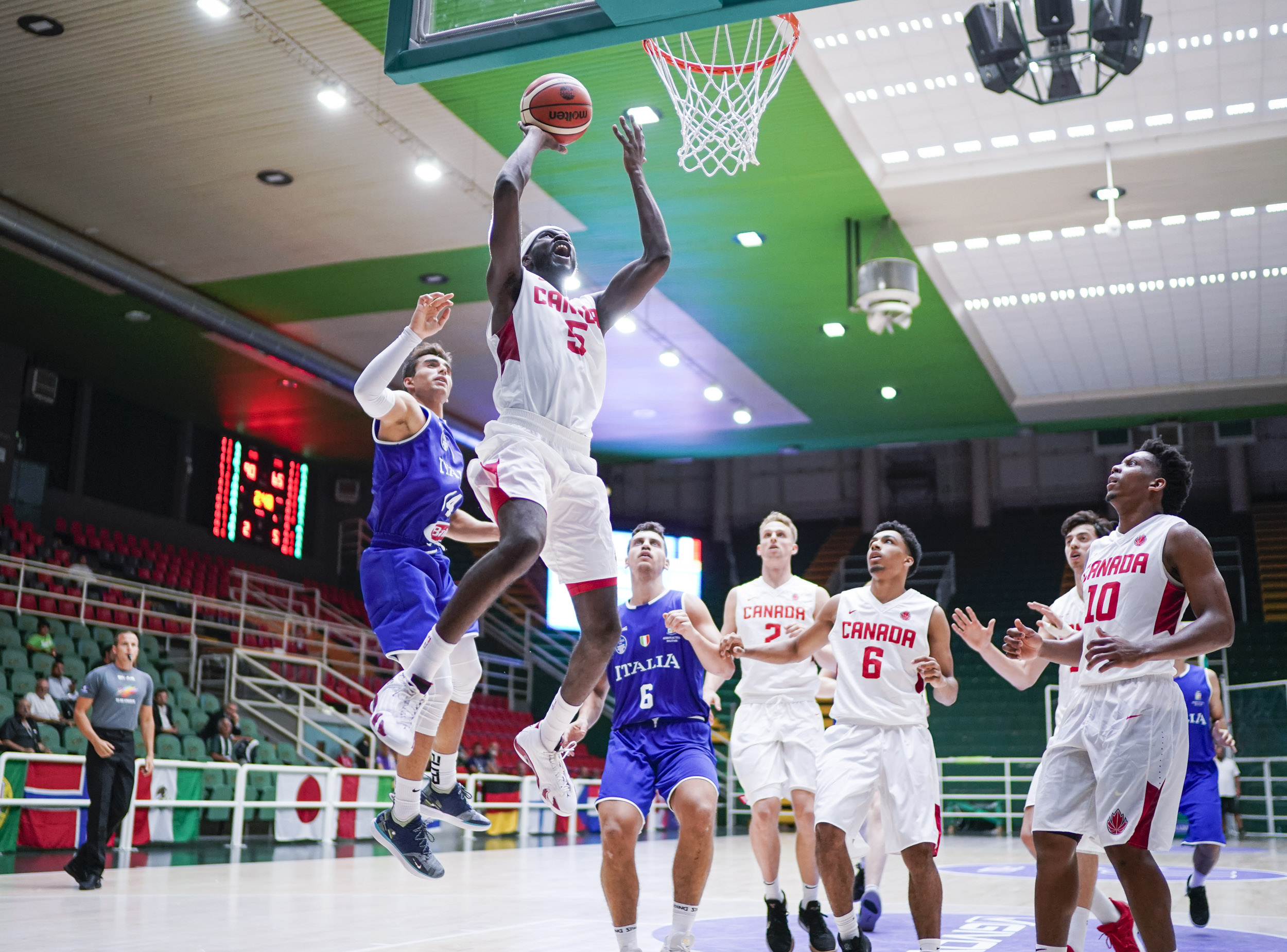 “It was a good environment to get used to. Stressful, but good stressful.“

“It was a good environment to get used to. Stressful, but good stressful.“

Canada raced out of the gates thanks to a strong transition game and good ball movement on offence, leading to a Grant Shephard dunk. After Italy took a 7-6 lead, Canada embarked on a 21-5 run to end the opening quarter, holding Italy to just 7 per cent from the field to take a 27-12 lead into the second. The quarter was capped off by a Mambi Diawara steal leading to a Nik Kasongo buzzer-beater.

The Italians found their range in the second quarter, cutting the lead down to just seven with a 9-0 run over the opening two minutes before a Munis Tutu triple stemmed the tide. Play grew frantic at times late in the period, but Canada was able to get organized and actually extended its first-quarter lead, and it was 52-365 at the half.

The third quarter was all Canada for five minutes before Italy picked up a 20-10 advantage to cut the lead to 71-65 after 30 minutes. Another Italian triple opened the fourth to pull the home side within six before Canada ran away with it in the end. 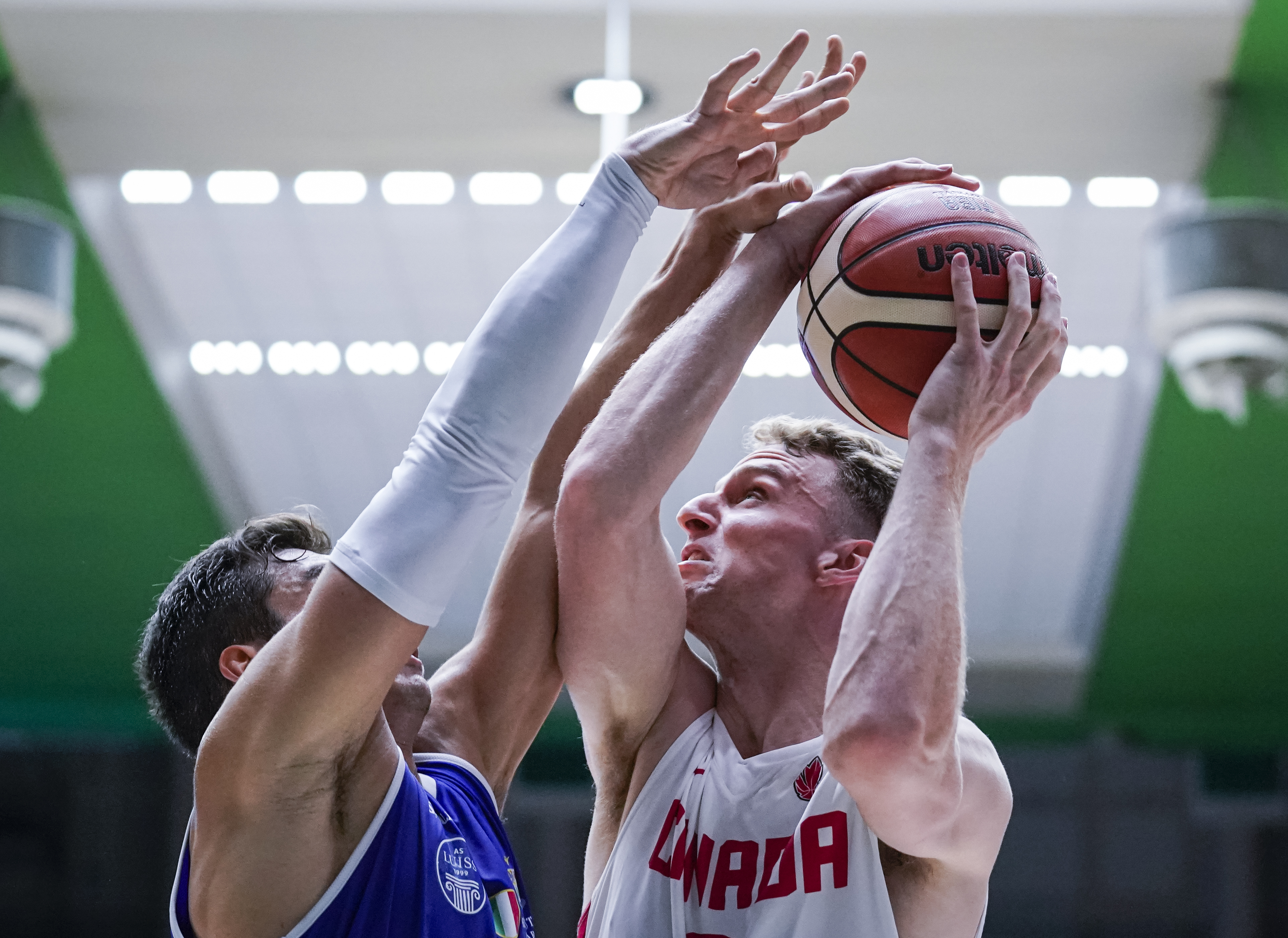 Carleton’s Munis Tutu was Canada’s leading scorer with 19 points, picking up 10 rebounds for the double-double. Diawara of Calgary and Laurentian’s Kadre Gray each had 14 points, with half of Diawara’s coming in the fourth-quarter run, while Marc-Andre Fortin of Laval chipped in 10.

Federico Mussini was key to Italy’s comeback bid, leading his team with 19 points, while captain Valerio Cucci provided difficulty for Canada down low with his 14-point, 10-rebound performance.

The Canadians were strong on the glass, handily winning the rebounding battle 54-40 while shooting an impressive 51 per cent from the field.

Canada (1-0) will face Germany (1-0) Friday in its second of three games in as many days to open the tournament, with the winner holding the upper hand looking to clinch top spot in Group D. That game goes in Aversa, Italy Friday at 2 p.m. EDT / 11 a.m. PDT (8 p.m. local) at PalaJacazzi.