In both men’s and women’s volleyball, the Trinity Western Spartans open the season as the top team in the nation.

In their season-opening series with the Thompson Rivers Wolfpack (0-2), Trinity Western was led by outside Brodie Hofer, who led the offensive charge in the Spartans’ pair of wins. The third-year student-athlete registered 18 kills through two matches. 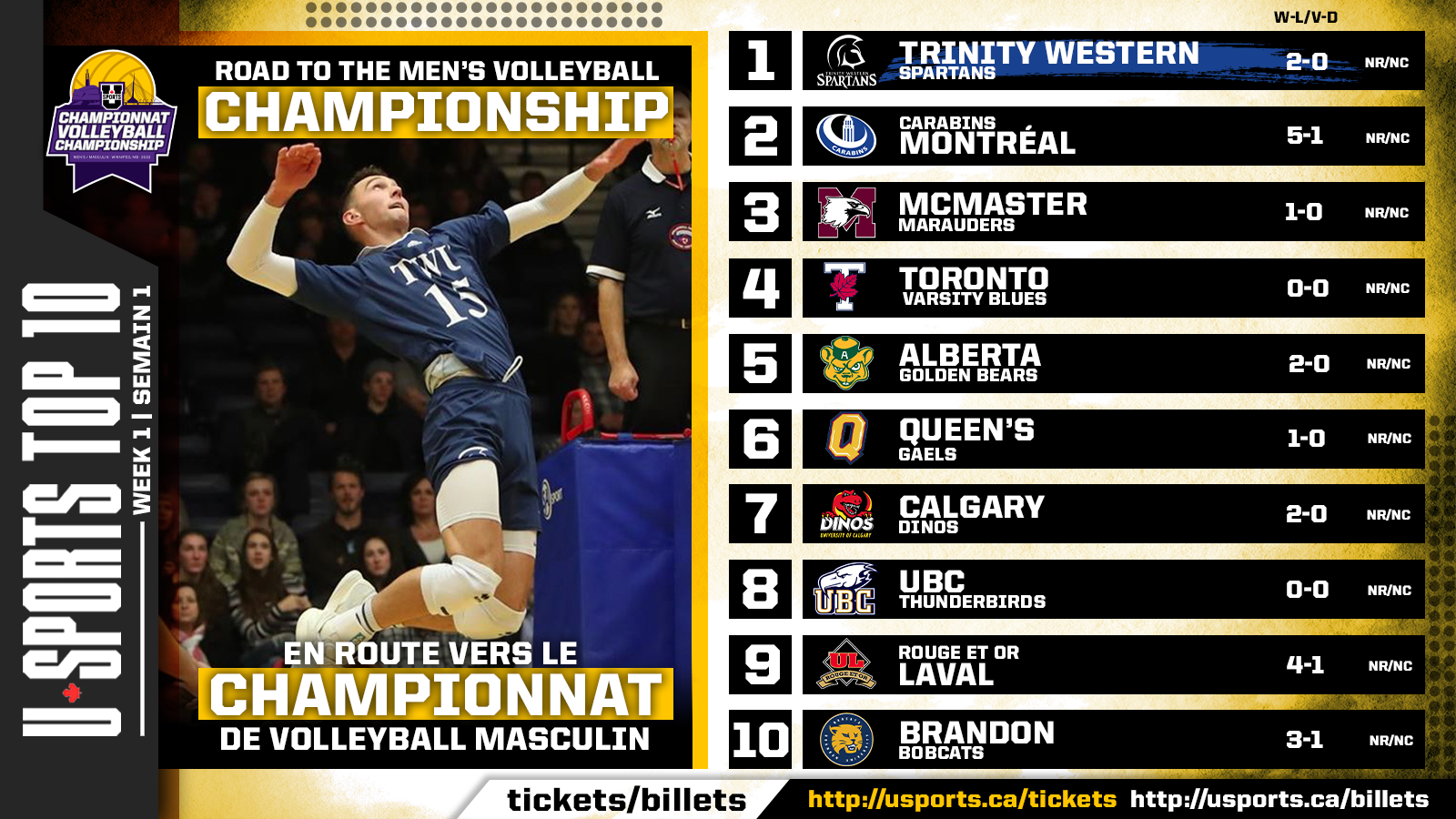 In the women’s volleyball, the No.1 Spartans (2-0) also started with a weekend sweep over the Wolfpack (0-2). In the second match, Victoria B.C. native, Savannah Purdy, had a match-high 11 kills to go along with seven digs for the Spartans, while fourth-year setter Olivia Heinen racked up 27 assists in the contest.

The UBC Thunderbirds (0-0) are the reigning U SPORTS champs, emerging as gold medalists in 2019. 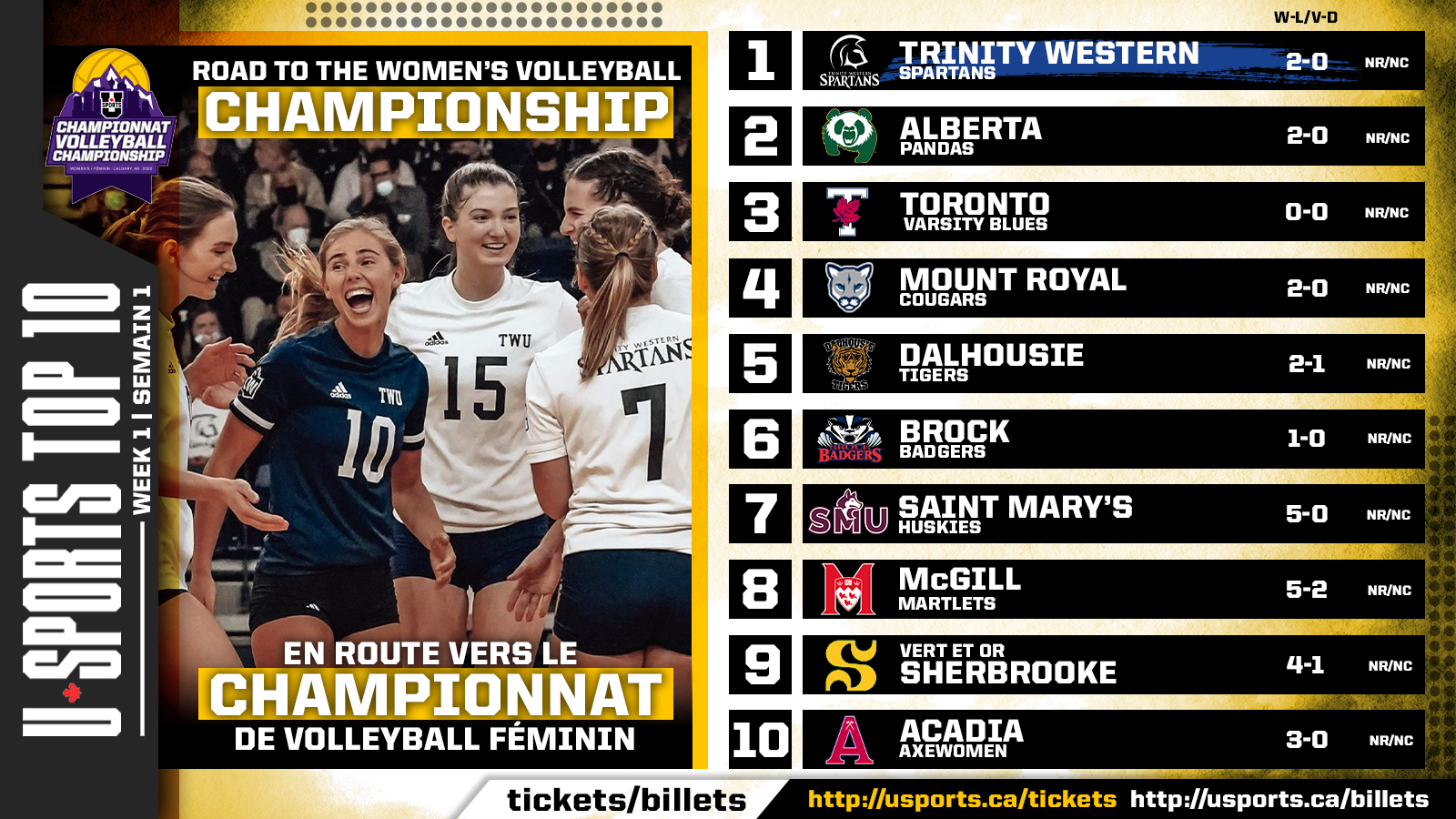 Perennial powerhouse Carleton Ravens (2-0) begin the season as the top-ranked squad in men’s basketball. Carleton has taken home the W.P. McGee Trophy as the U SPORTS Men’s Basketball Champions in nine of the last 10 seasons.

Guard Aiden Warnholtz started the season strong for the Ravens averaging 18.5 points while generating six steals to lead Carleton to a pair of dominant victories over the Lakehead Lakers (0-2). 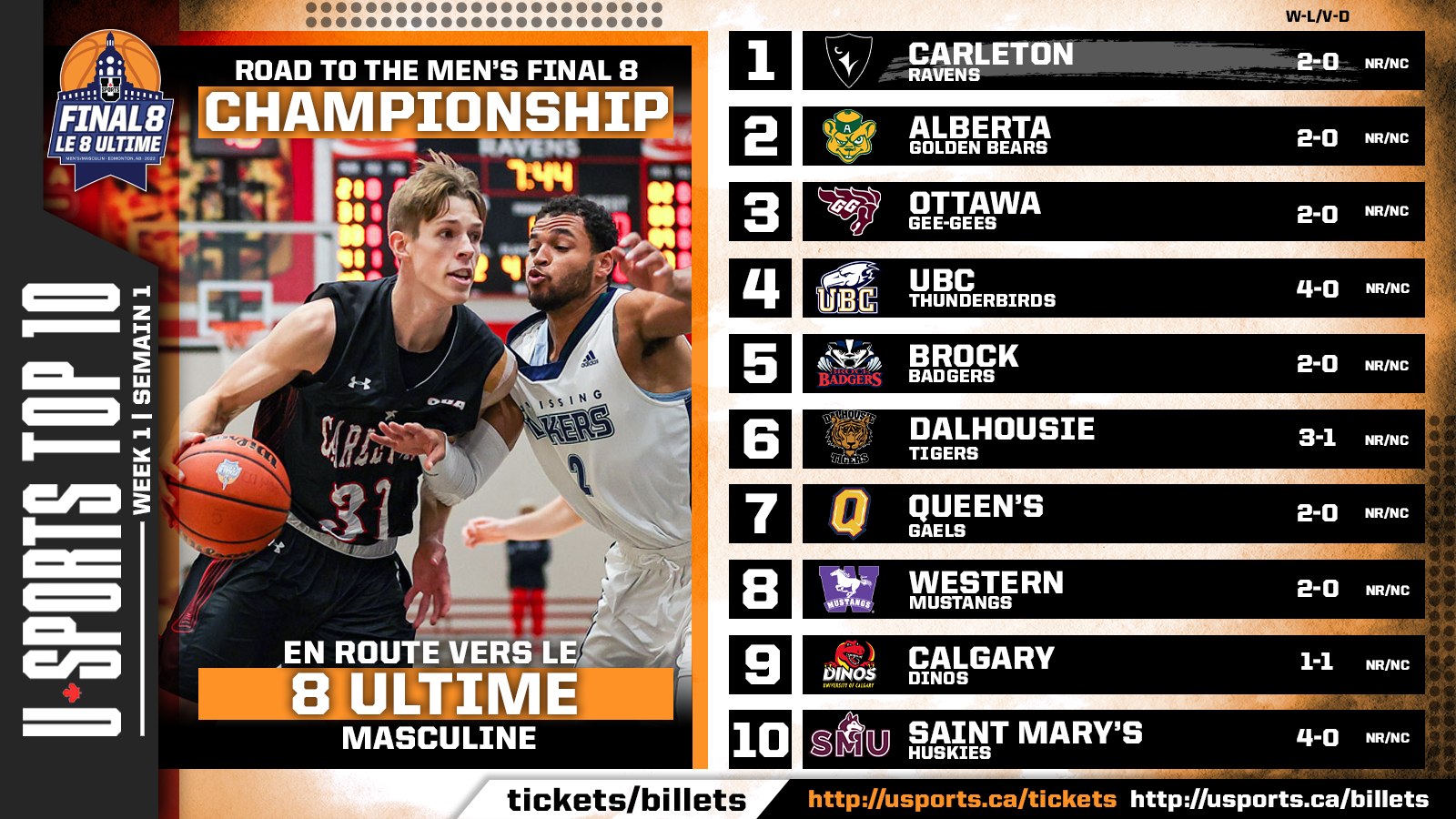 The Calgary Dinos (2-0) open the year as the top team in women’s basketball after a pair of commanding victories over the Lethbridge Pronghorns (0-4) to kick off their campaign. First-year guard Annacy Palmer dropped 31 points in the second game of the series to lead the Dinos to a 75-56 victory, going 12-of-17 from the floor.

The No. 2 Saskatchewan Huskies (4-0) will look to repeat as national champions, led by All-Canadian forward Summer Masikewich. 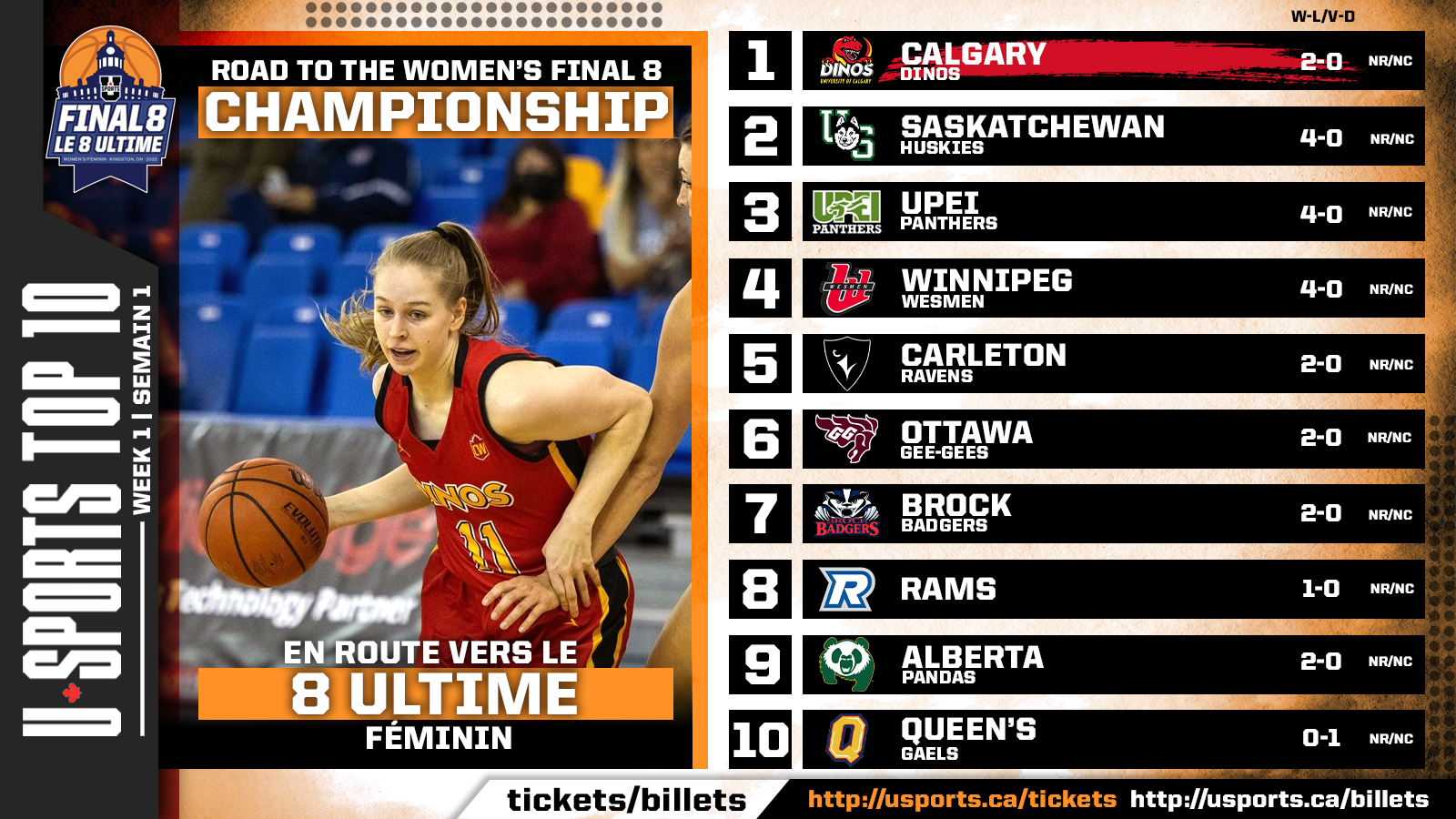 The men’s wrestling rankings also kicked off this week, with the Saskatchewan Huskies taking the top spot, while on the women’s side the Alberta Golden Bears begin the season as the team to beat. 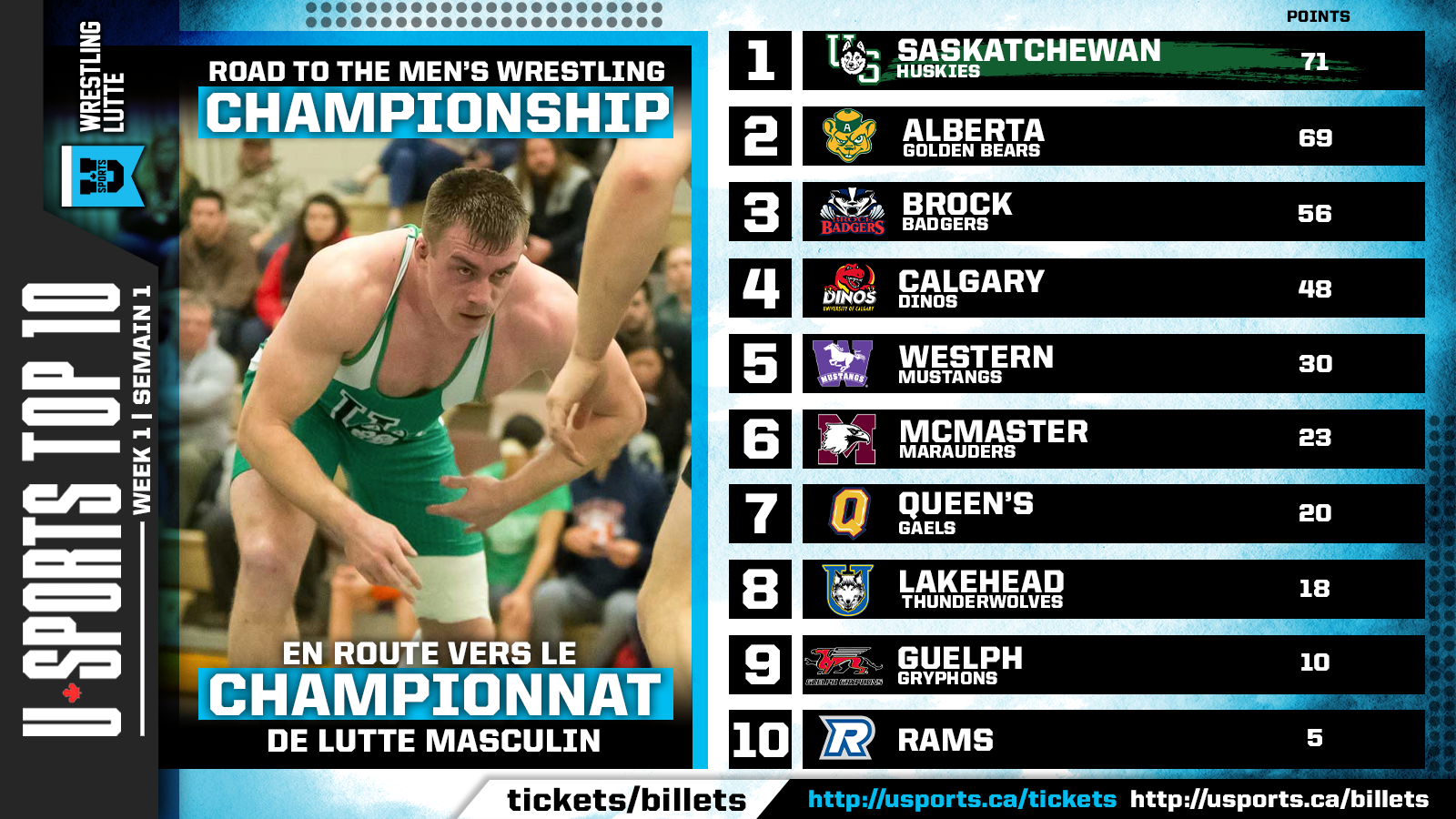 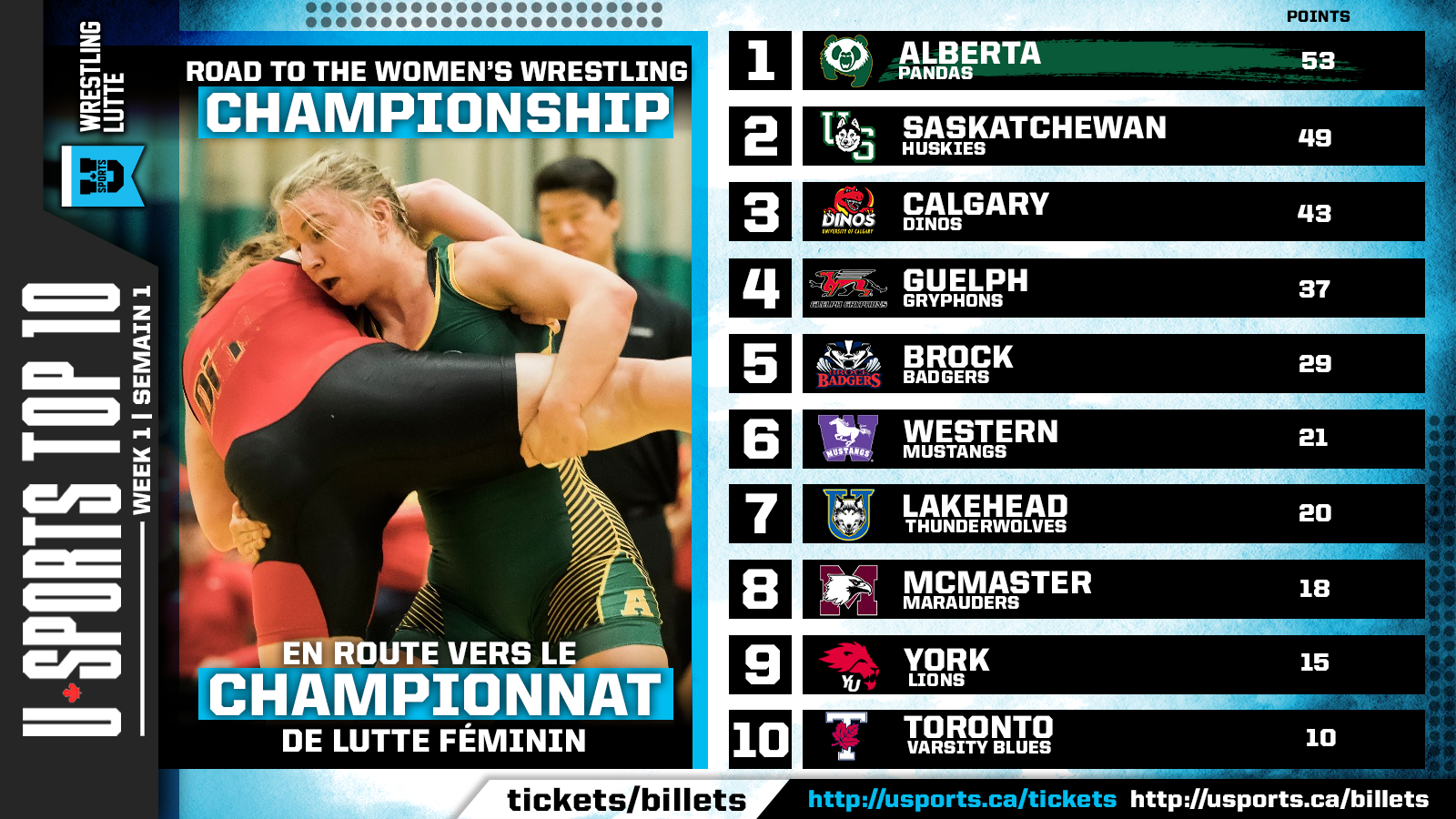 In football, the No. 1 Montreal Carabins (8-1) stay put in the top spot after clinching a berth into the Dunsmore Cup with a convincing victory over the Sherbrooke Vert et Or (3-6). Montreal will take on familiar foe Laval Rouge et Or (6-3) to determine the RSEQ championship. 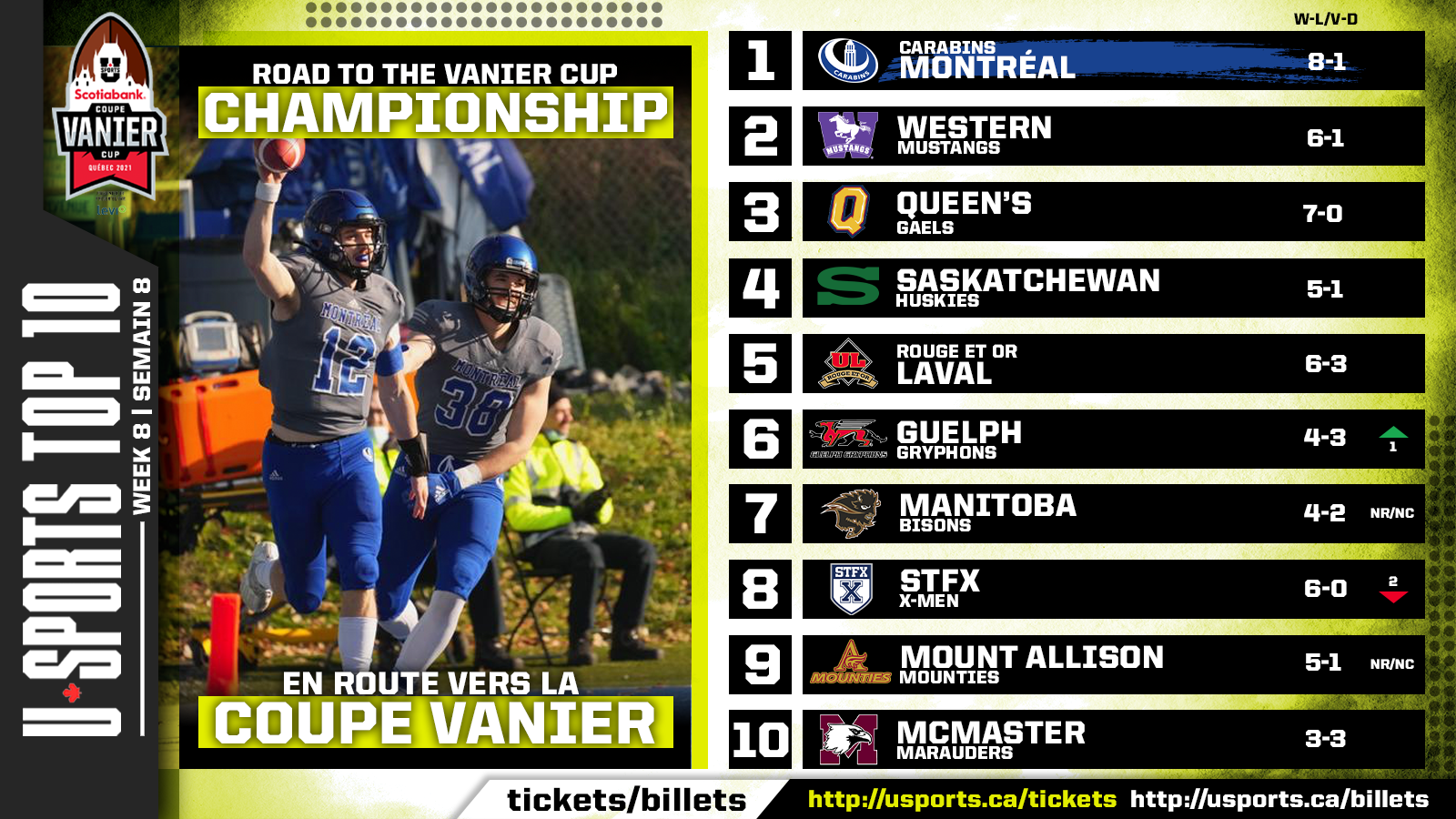 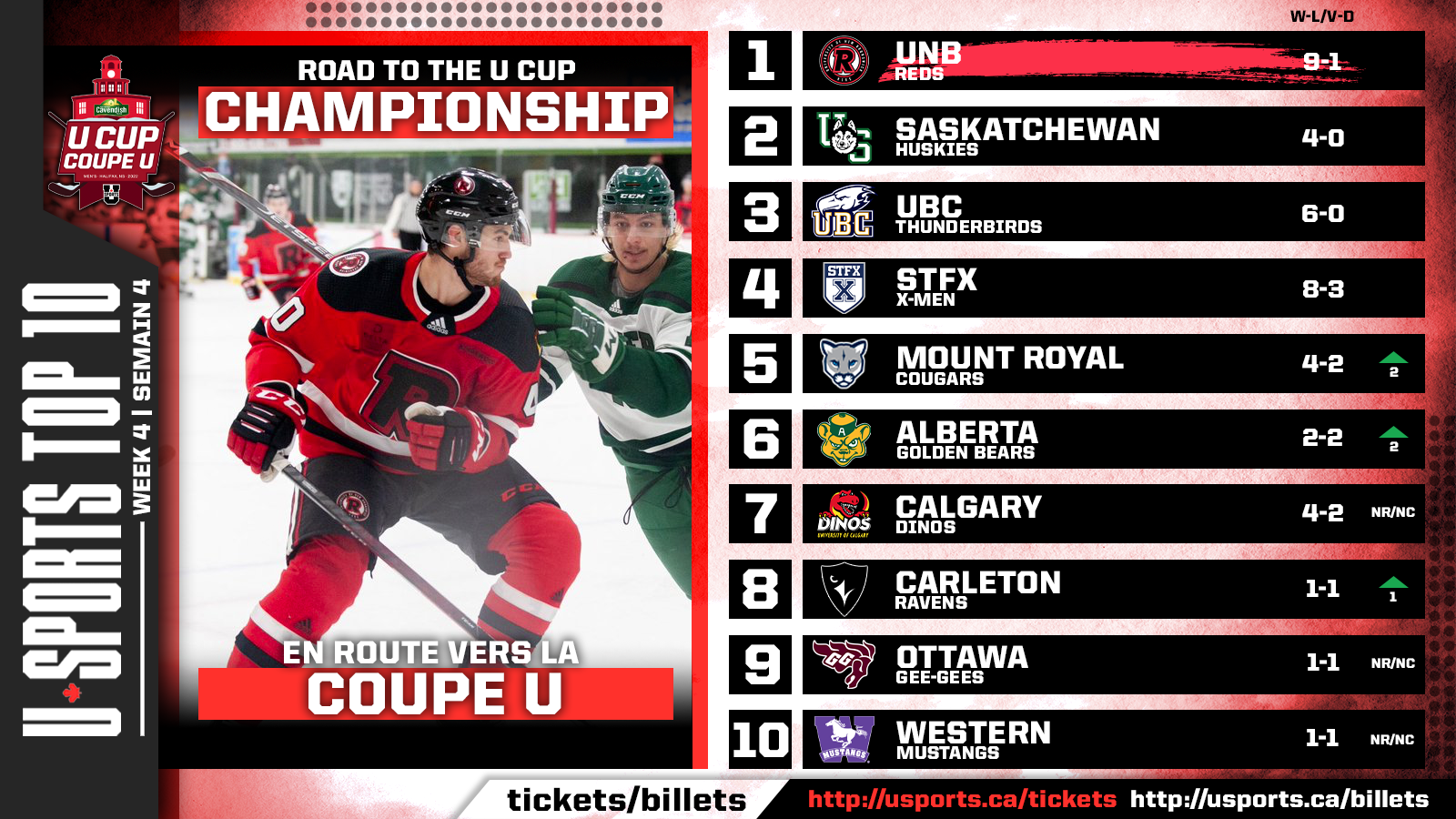 In women’s hockey, the McGill Martlets (4-0) have moved into the No.1 position after continuing their undefeated campaign. Centre Jade Downie-Landry leads the Martlets with three goals and seven assists through four games this season. 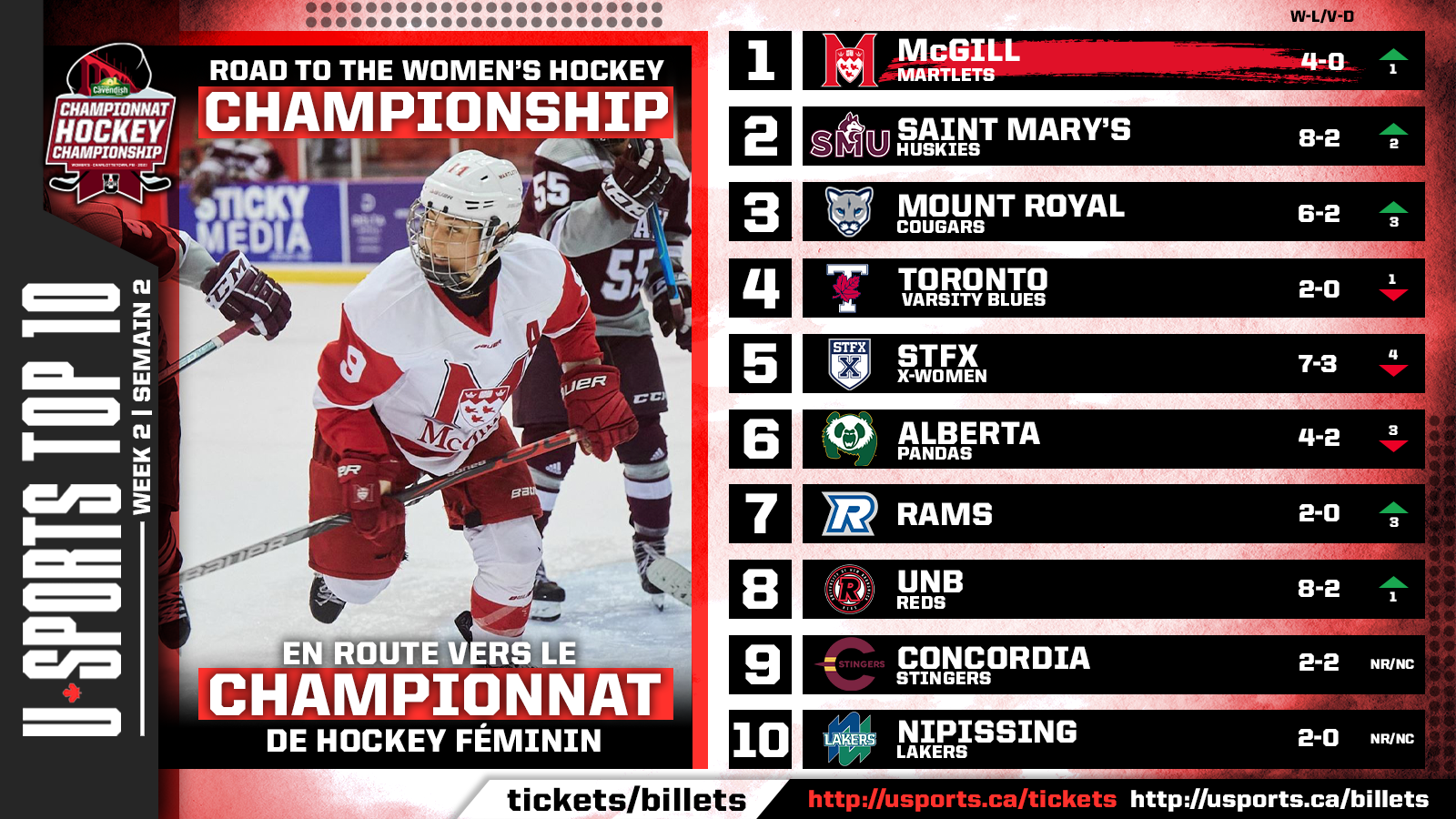 In men’s soccer the No. 1 Cape Breton Capers (10-1-3) retain the top seed after capturing their fifth consecutive AUS men’s soccer banner, blanking the Saint Mary’s Huskies (8-4-3) by a score of 4-0.

The No. 2 York Lions (10-1-1) and No. 3 Guelph Gryphons (9-0-3) are set to square off in an OUA championship match to determine conference supremacy ahead of the U SPORTS Men’s Soccer Championship held in Ottawa. 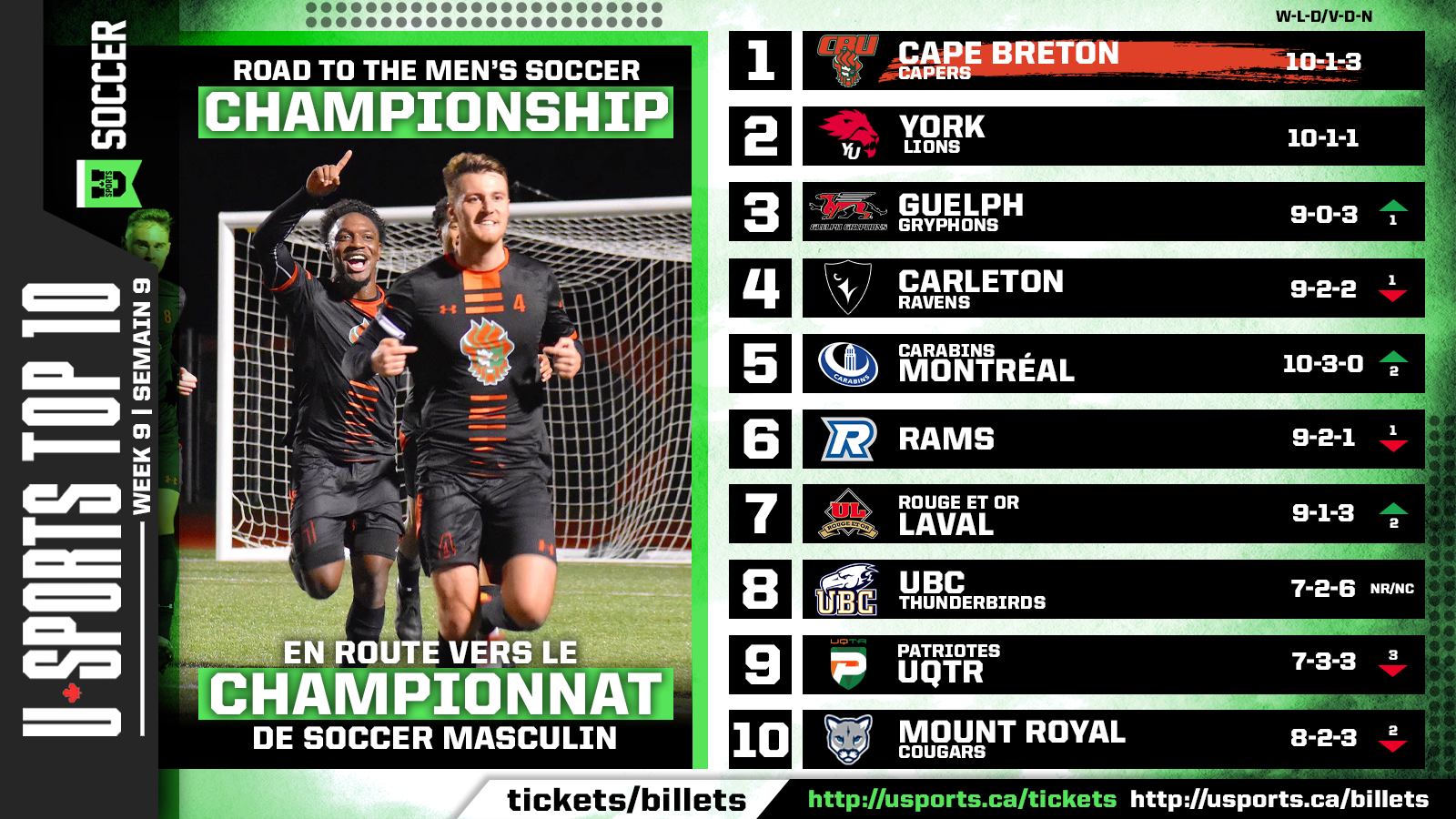 In women’s soccer, the  No.1 Trinity Western Spartans (14-0-1) remain the top seed after taking gold in the Canada West Final Four, topping the UBC Thunderbirds (11-2-2) 1-0 to clinch the title. 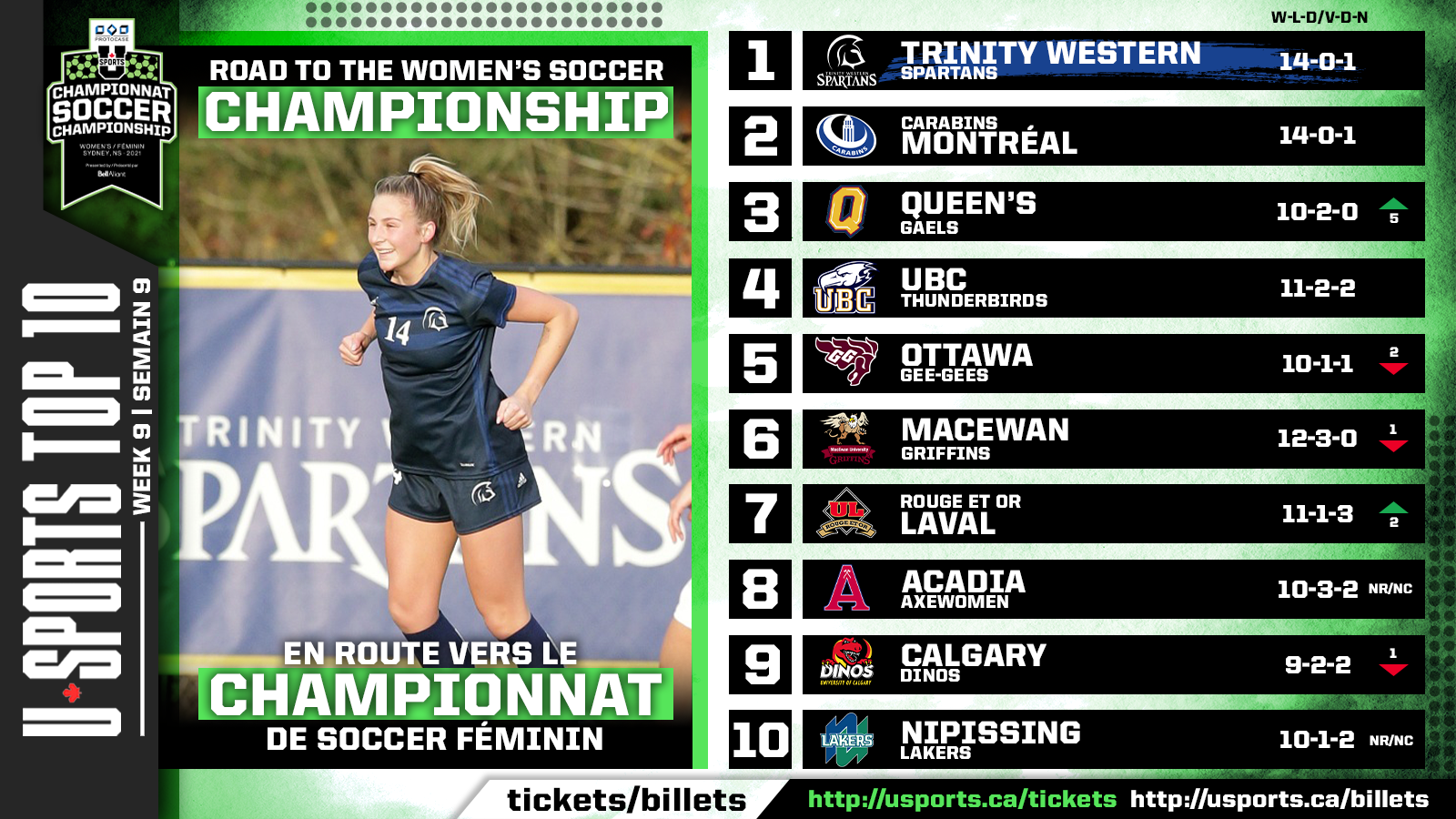 In cross country, the No.1 Guelph Gryphons remain the top seed on the women’s side after winning their first OUA championship since 2016. The Gryphons placed five runners in the top seven, with fourth-year Kiana Gibson taking individual gold. 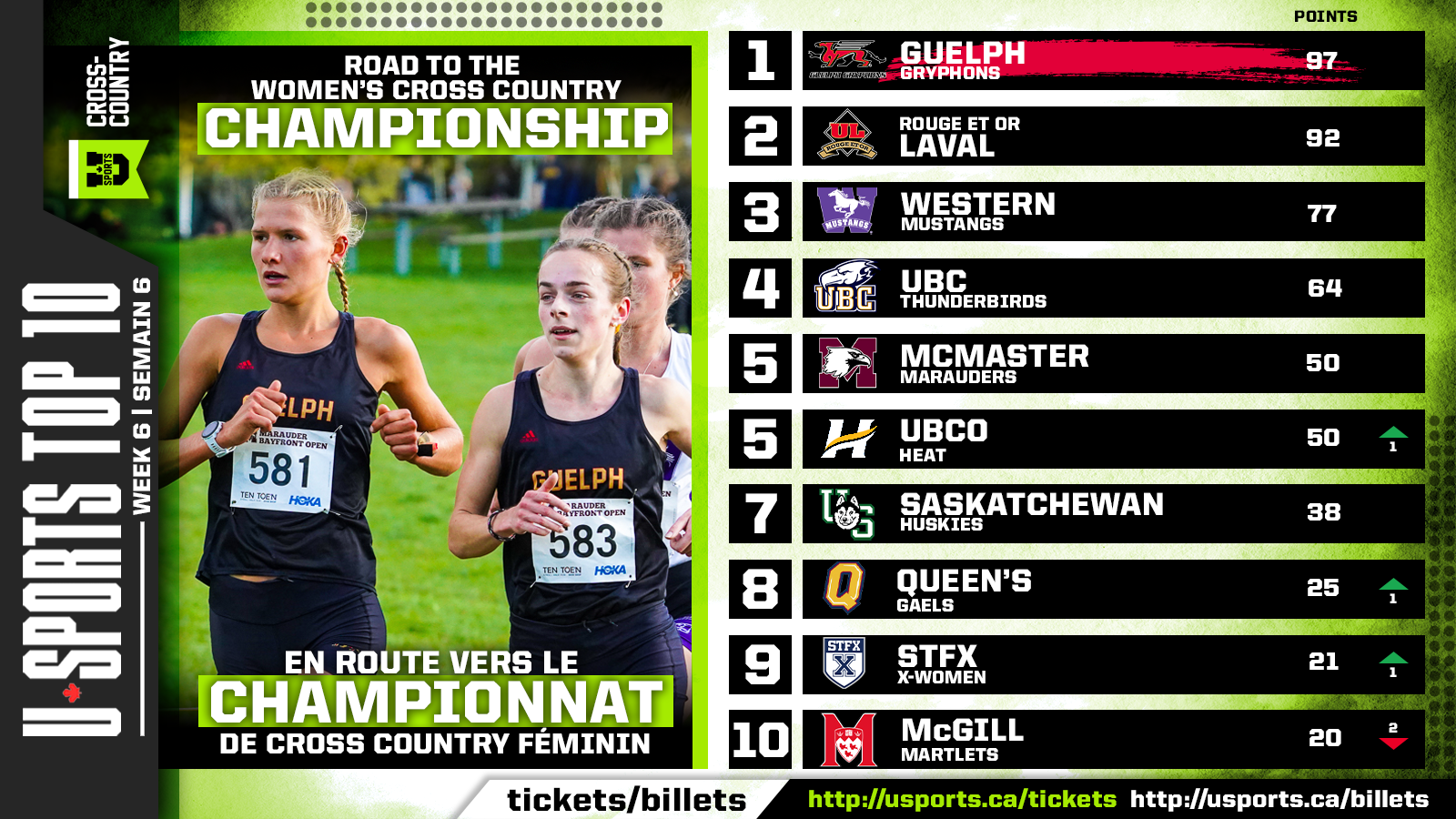 On the men’s side, the Laval Rouge et Or were idle, but take the No.1 seed heading into the U SPORTS Men’s Cross Country Championship.

The No. 2 Guelph Gryphons, hot on the heels of Laval, took home their second consecutive OUA banner with Mitchell Ubene’s silver-medal performance leading the way for the Gryphons. 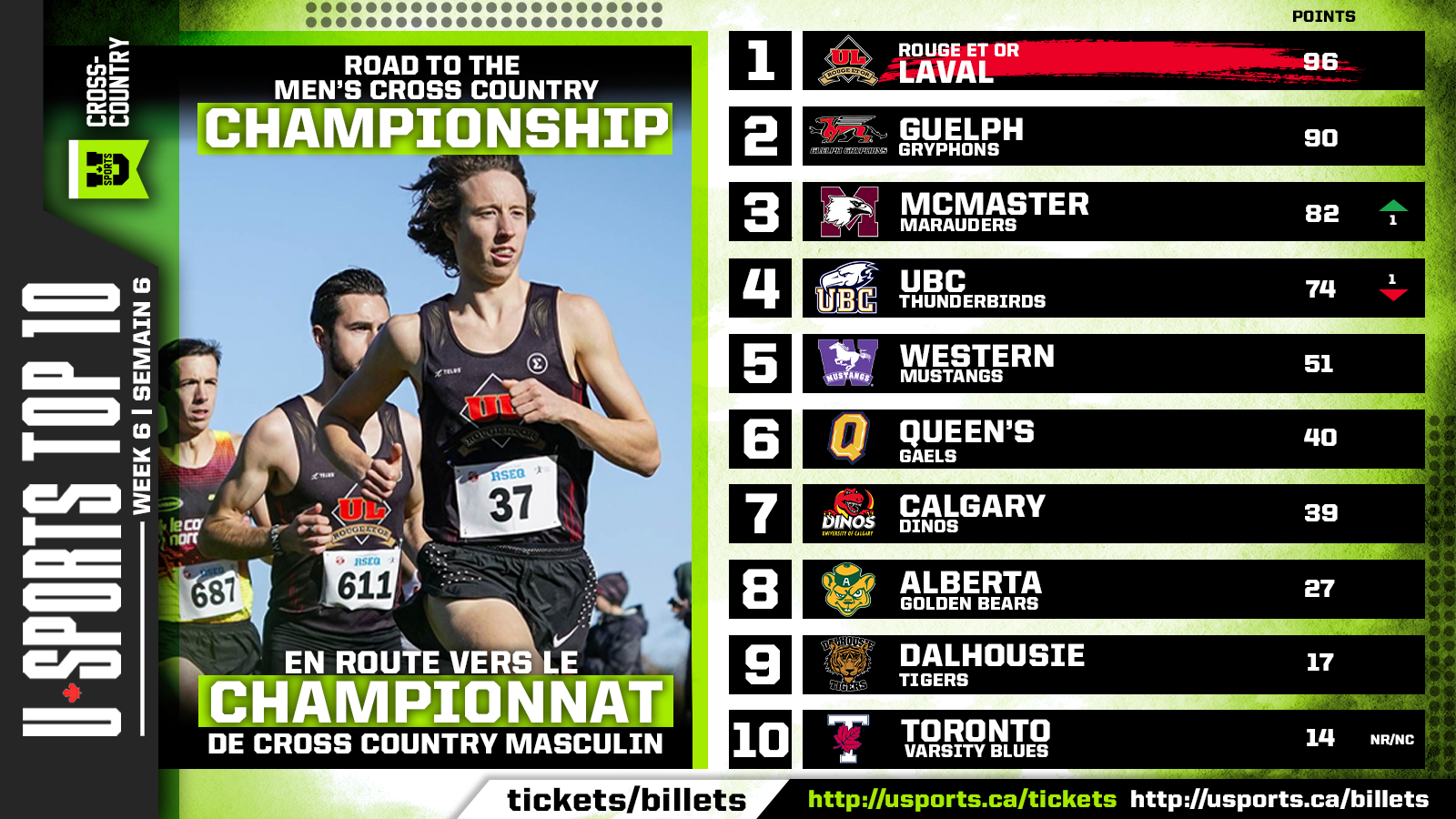