When people think of the word “Monday,” negative thoughts creep into their mind as they realize that yet another hectic work week is ahead. If you thought Toronto Varsity Blues swim coach was one of these people, you’d be mistaken.

“I actually look forward to Monday because I get to come in and work at something I love,” says MacDonald.

MacDonald, a former Canadian international swimmer and Olympian, made his coaching debut in 1976 with the York Lions after learning about the position after not qualifying for the Montreal Olympics at the Canadian trials. The relatively inexperienced coach would have a brief stint at York, at which time MacDonald took the 24th ranked U SPORTS swim team and transformed them into the third-best team in the country, before heading off to coach rival University of Toronto in 1978. 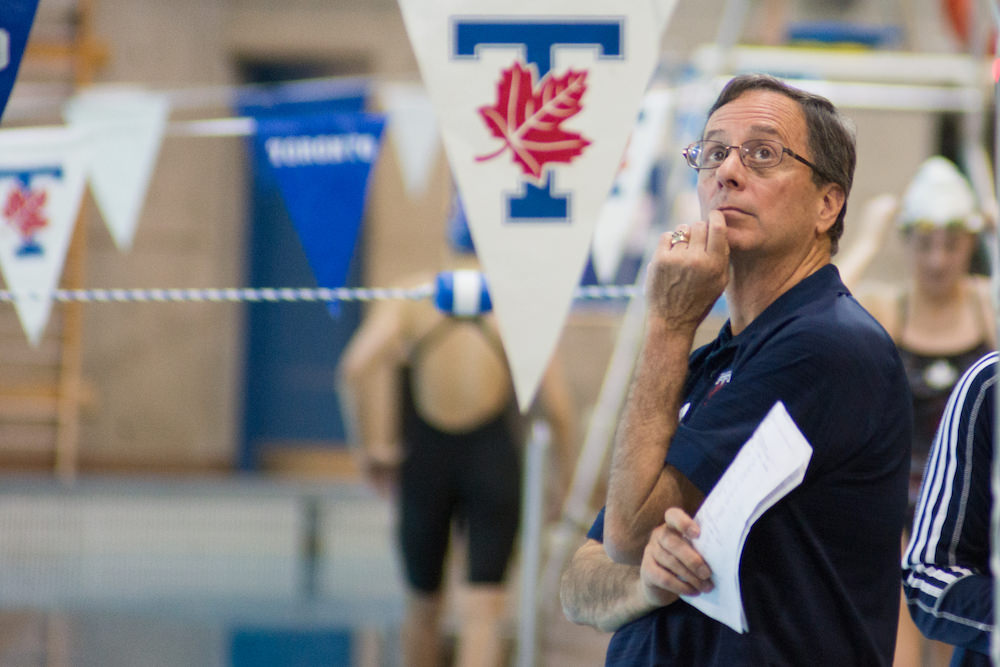 As a Varsity Blue, MacDonald’s career took off as he continued to find exuberant amounts of success and more importantly learned an important lesson.

“When I came to U of T everything fell into place pretty well, and it became pretty obvious that I wanted to be a coach and stay in it forever. “

As a member of the University of Toronto swim team, MacDonald has had an illustrious career, winning multiple OUA and U SPORTS Coach of Year awards, having guided his teams to 58 conference championships (31 men and 27 women) and 24 national banners (15 women and nine men), all while coaching over 200 swimmers to All-Canadian status and seeing over 70 swimmers reach their international teams.

Although for some, personal accolades are what is most important, MacDonald hasn't stayed committed to coaching for so long to win championships and awards, but for another reason. 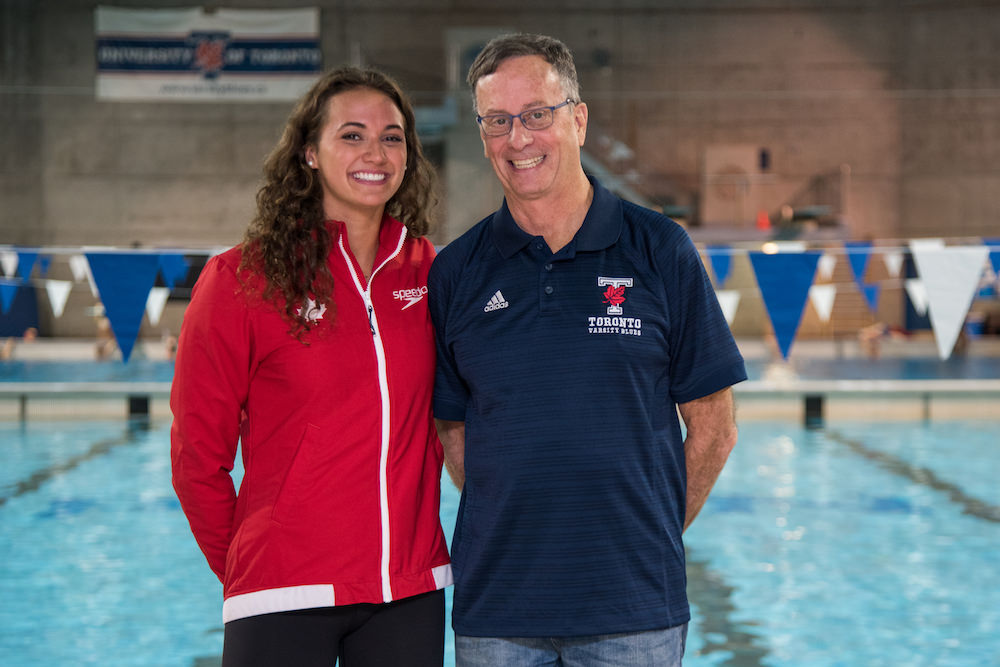 One such journey that MacDonald has been apart of since 2014 is that of Canadian superstar, Kylie Masse. Over the last four years, MacDonald has spent countless hours, at all times of the day, coaching the young phenom and 2016 BLG U SPORTS Female Athlete of the Year to be her best. Through both their efforts, MacDonald has been able to see his protégé set a new world record in the 100m backstroke at the 2017 FINA World Championships in Budapest and call her bronze medal victory in the same event at the Rio 2016 Olympics.

In fact, MacDonald has had the unique opportunity to watch Masse and other athletes from the broadcast booth, acting as a colour commentator for CBC Sports on both the international and national stage for decades.

For his long-term excellence as a coach, MacDonald was recognized Monday night at the BLG / U SPORTS Awards gala as the 2018 winner of the Jean-Marie de Koninck Coaching Excellence Award. He joins a list of exceptional coaches to have won the award that has been presented since 2007, but it is extra special for MacDonald, who has a unique bond with de Koninck. A bond that has been formed over their shared passion for swimming, coaching and a four-decade-long relationship, built on the pool deck and in the broadcast booth. 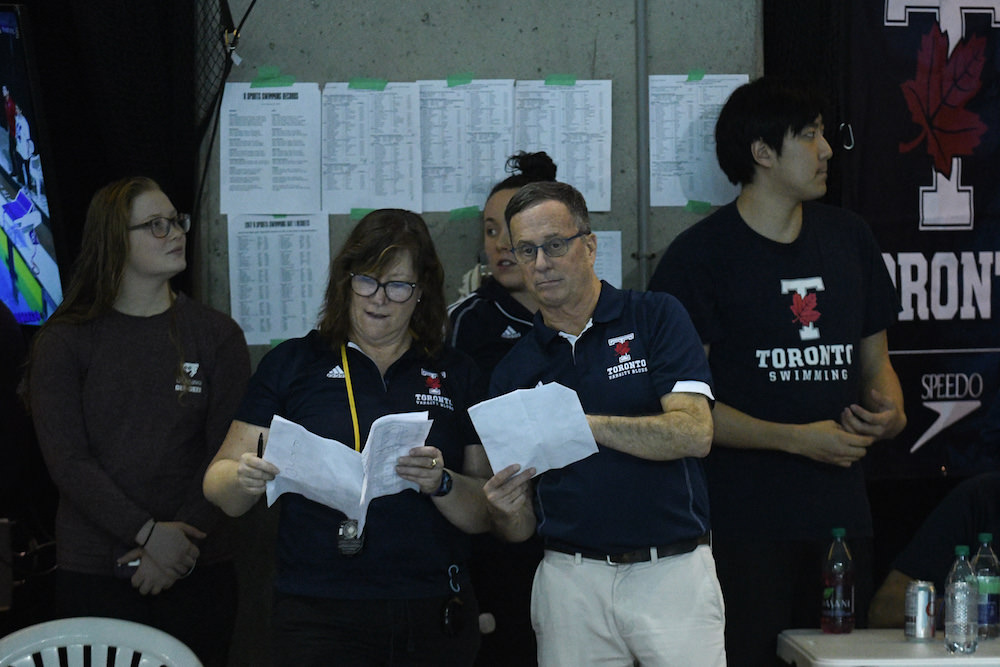 “I go to Australia, I go to Beijing, I go to Barcelona, I sit down in my booth and six feet away, there’s Jean-Marie sitting there doing the French CBC,” says MacDonald, a two time Gemini Award winner for his work as a colour commentator, as he reminisced about the years of encounters he has had with the former Laval swim coach and ex-Olympic Radio-Canada commentator.

Having MacDonald win the award this year was equally special for de Koninck, who recalls countless conversations sharing strategy and tips on how to motivate athletes with the Varsity Blues bench boss.

“All these other coaches have all kinds of (problems). They cannot motivate their senior athletes, and their senior athletes quit,” says de Koninck, who has coached with and against MacDonald. “Well, Byron manages to keep them in the loop, even though they might appear hopeless to another coach, and immediately give up. Byron never gives up, and he’s always there picking up the challenge. When a performance depended on getting the best out of a swimmer, he was the coach to make it happen.” 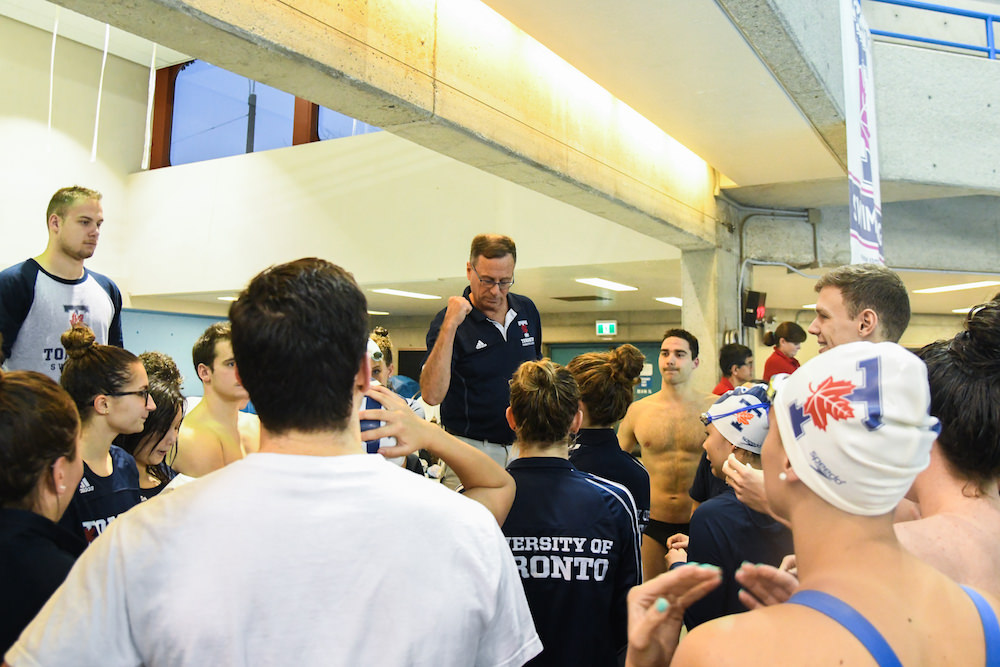 MacDonald has done everything in his career, from broadcasting to coaching Olympians, to winning personal and team awards, but still to this day he works 50-60 hours a week, all for the love of the sport and his athletes.

“Byron certainly deserves (the award),” adds de Koninck, who feels privileged to have worked with his colleague at the varsity and international level. ”There’s other fine people who got the award, I know of. But this time it’s really right on the spot because it’s a coach, a swimming coach, for one, and so happens to be someone who always I’ve admired. For 40 years I've seen a lot of good Canadian coaches come up, and then somewhat go down a little bit. But he’s always been on top.”