The No.1 Trinity Western Spartans (15-1) made program history with a come-from-behind victory over the UBC Okanagan Heat (8-8) last Saturday. The win solidified a .938 win percentage for the Spartans, their best in TWU women’s history.

Trinity Western rallied after falling behind 2-1 but was able to dominate the last two sets to finish conference play with only a single defeat.

Mikayla Benterud had a career-best 14 kills to go along with three blocks and a service ace, while Amaya Perry chipped in with 10 kills, eight digs and two blocks for the Spartans.

The Acadia Axewomen (9-3) moved into the No.8 slot after a hard-earned victory over the No. 10 Dalhousie Tigers (6-5) before battling back to defeat the Saint Mary’s Huskies (9-4) 3-2 to claim the top spot in the AUS Conference.

Acadia’s Taylor Collombin leads the AUS with 217 kills through 12 matches played and ranks second in U SPORTS with 4.34 kills per set. 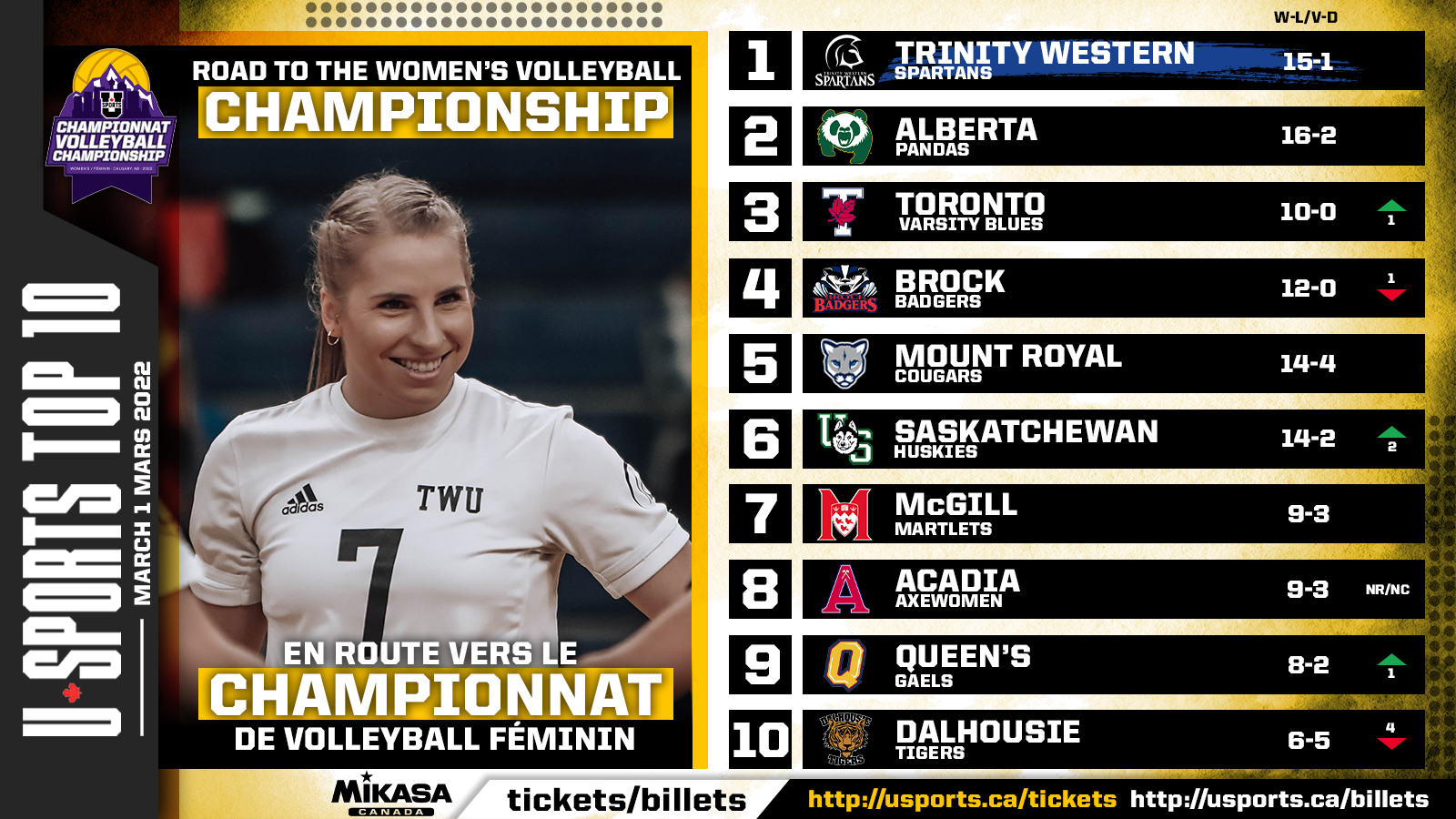 In men’s volleyball, the No.1 Trinity Western Spartans (15-1) remain the nation’s top seed after splitting a pair of matches with the UBC Okanagan Heat (10-6) this past weekend.

In RSEQ action, the No. 8 Sherbrooke Vert et Or join the top 10 after pulling out a victory over the Laval Rouge et Or (7-4) last Friday. Sherbrooke’s Yoan David excelled with a team-high 16 kills for the Vert et Or. 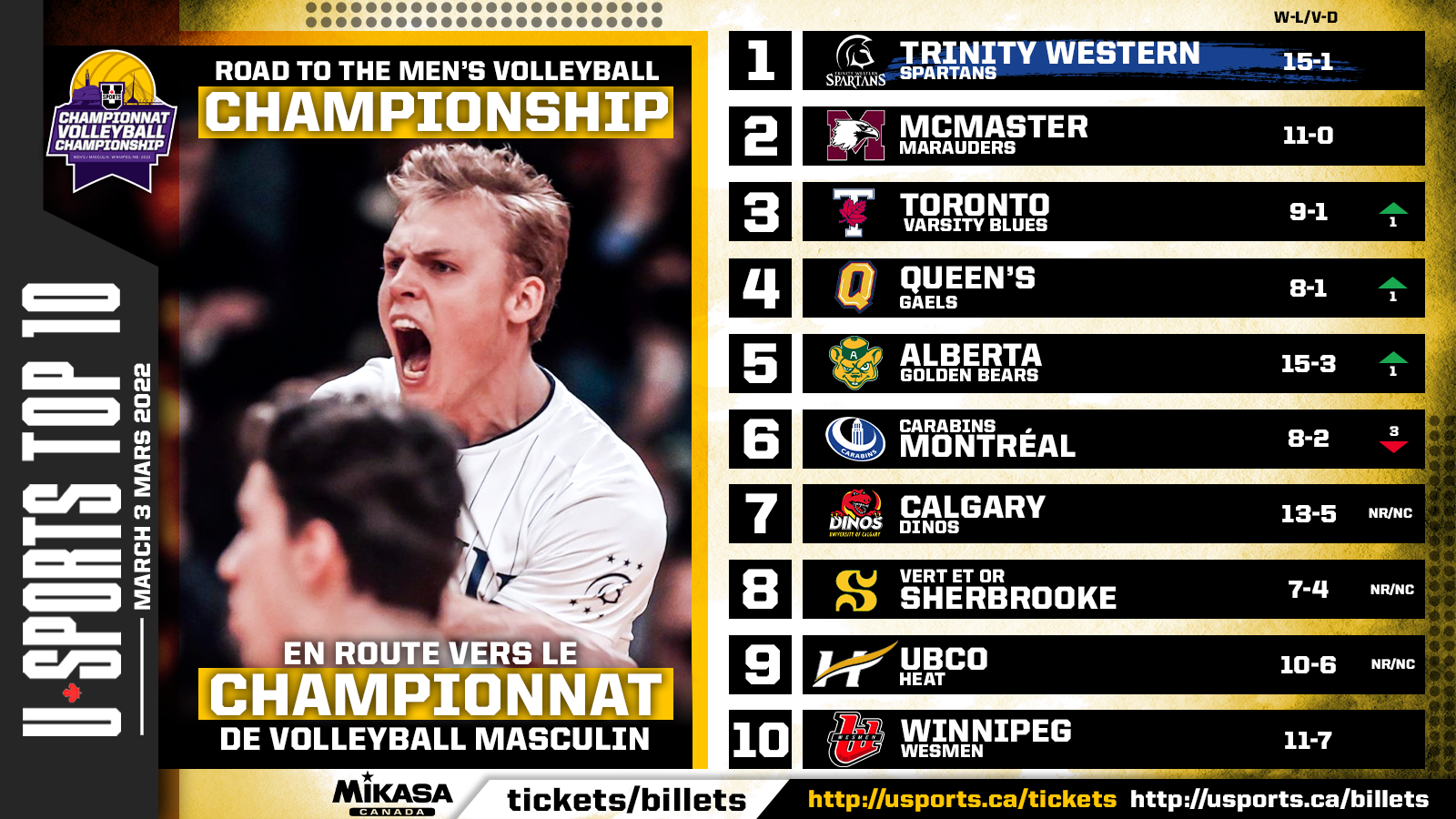 In women’s hockey, the No.1 Toronto Varsity Blues (13-1) remain the team to beat after dispatching the York Lions (2-12) in a back-to-back series. Toronto’s Erica Fryer stood tall between the pipes for the Blues, allowing just two goals on 39 shots over both games. Toronto is now unbeaten in their last ten contests. 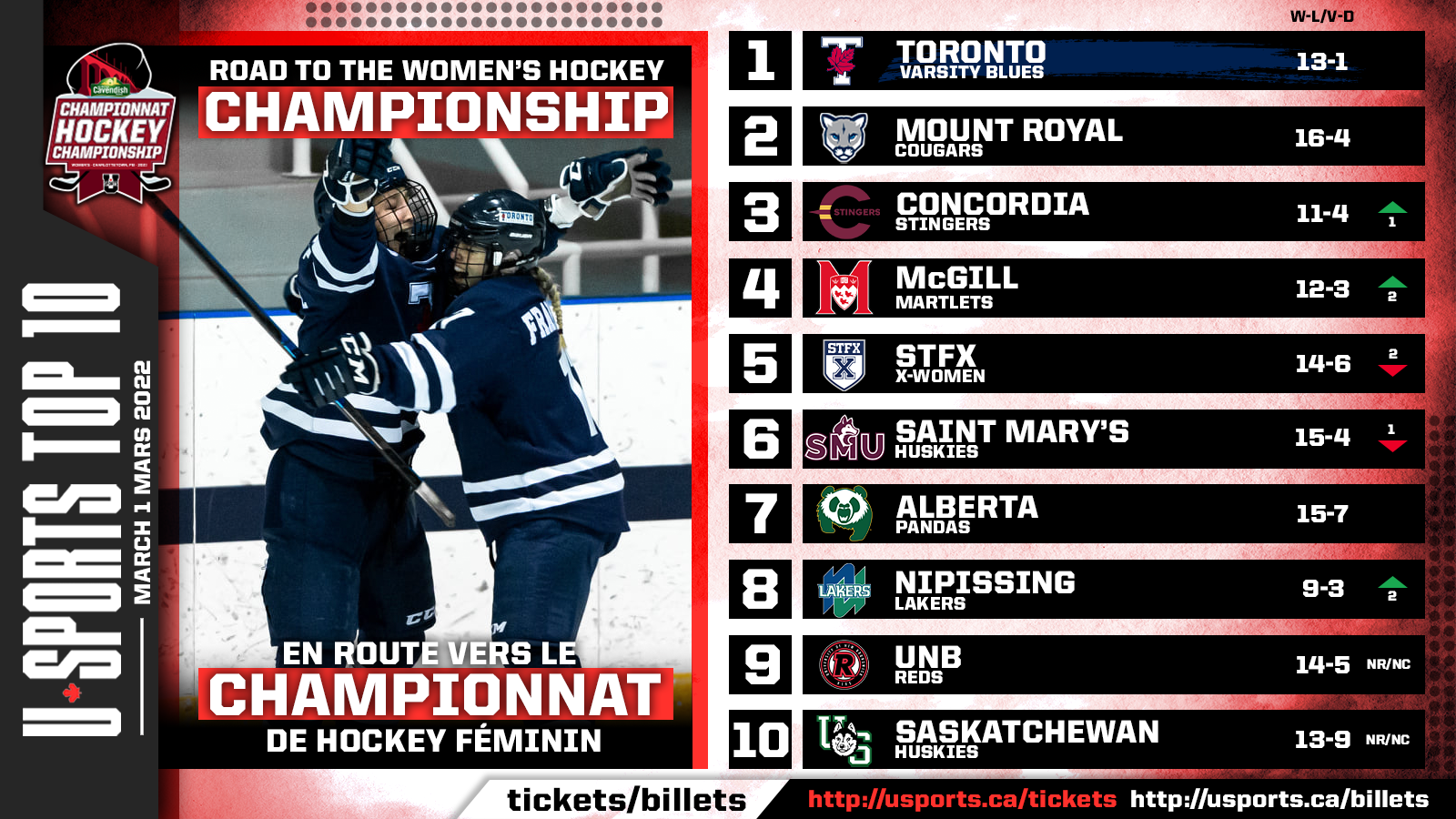 The Reds beat the Acadia Axemen (7-14) in Friday’s tight contest before the Huskies pulled a third-period upset over UNB on Saturday. With the Reds leading 3-2 heading into the final frame, Logan DeNoble of the Huskies equalized with a power-play marker before Sam Dunn scored the winner with less than 10 minutes to go in the game.

Despite the loss, UNB still remains atop the AUS standings. 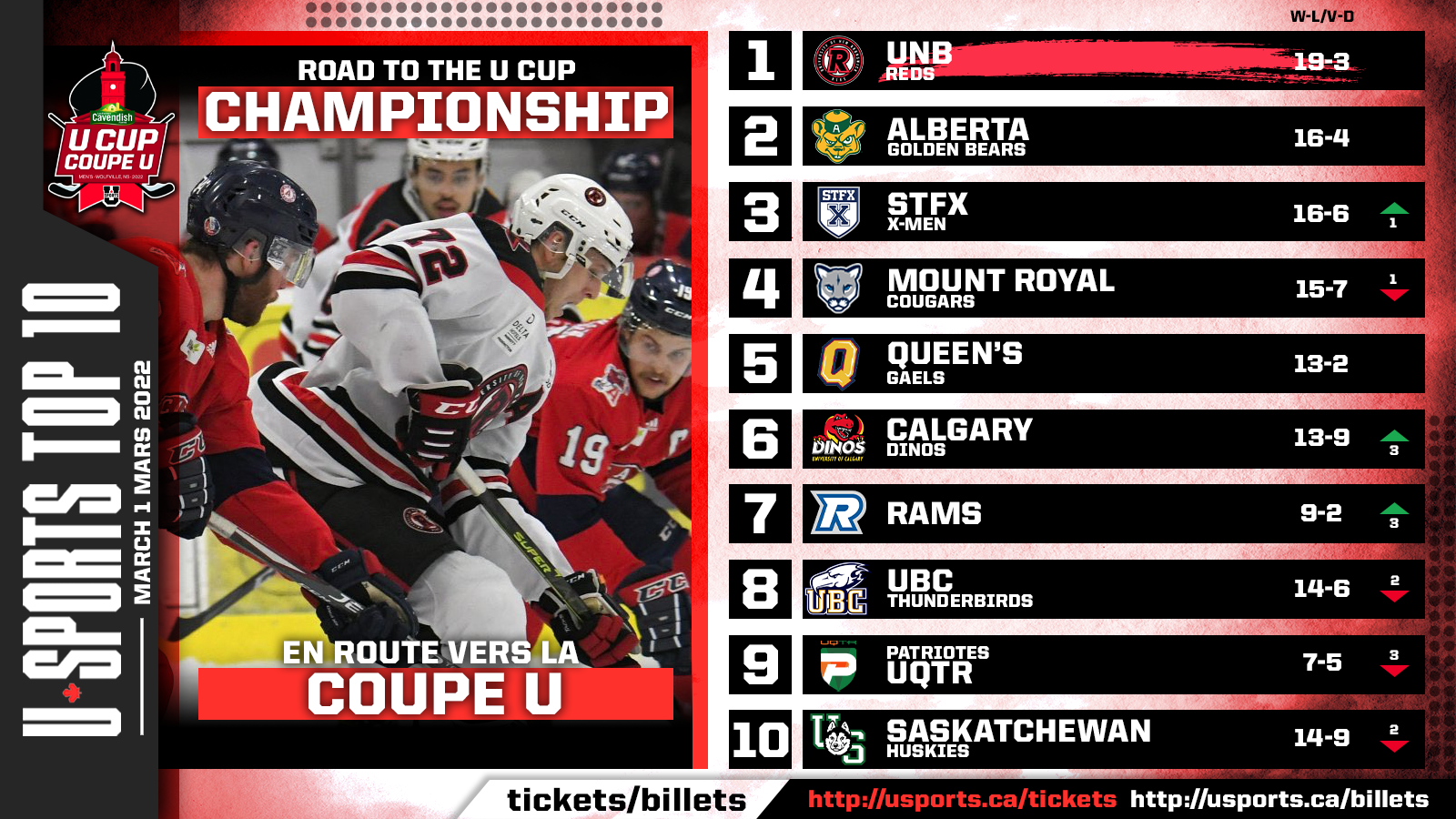 In women’s basketball, the No.1 Brock Badgers (12-0) are on top of the rankings for a second consecutive week after extending their unbeaten season with a victory over the Waterloo Warriors (5-5).

Mackenzie Robinson scored 21 points for the Badgers in a 70-47 rout of the Warriors as the Brock defence held Waterloo to just 25 percent from the field. 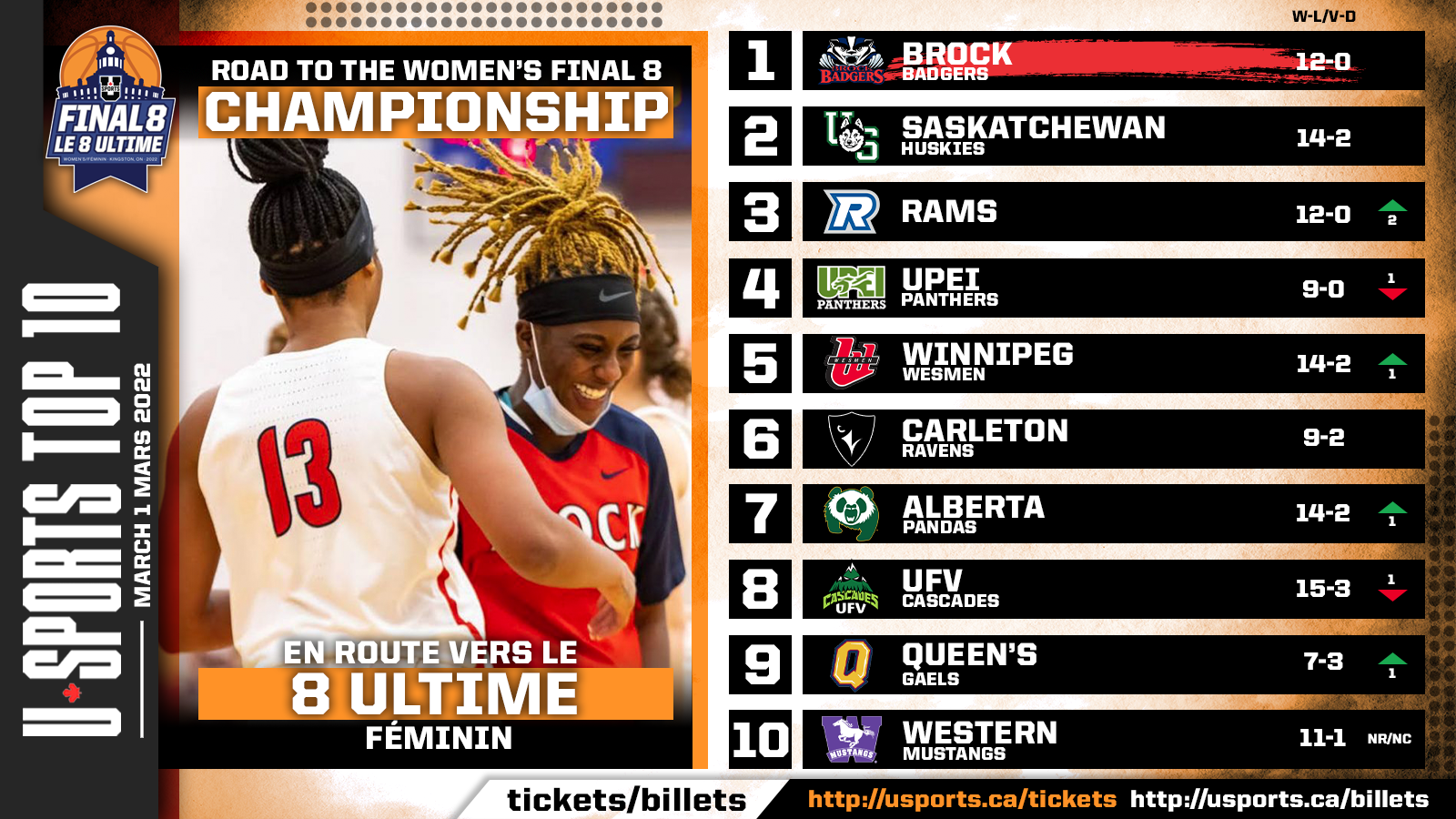 In men’s basketball, the No. 1 Carleton Ravens (11-0) continued their perfect season with a pair of victories over the Toronto Varsity Blues (2-9).

The Ravens took advantage of 40 points in the paint in their Saturday night victory over the Blues, with Carleton big man Biniam Ghebrekidan scoring 19 points while grabbing 13 rebounds. 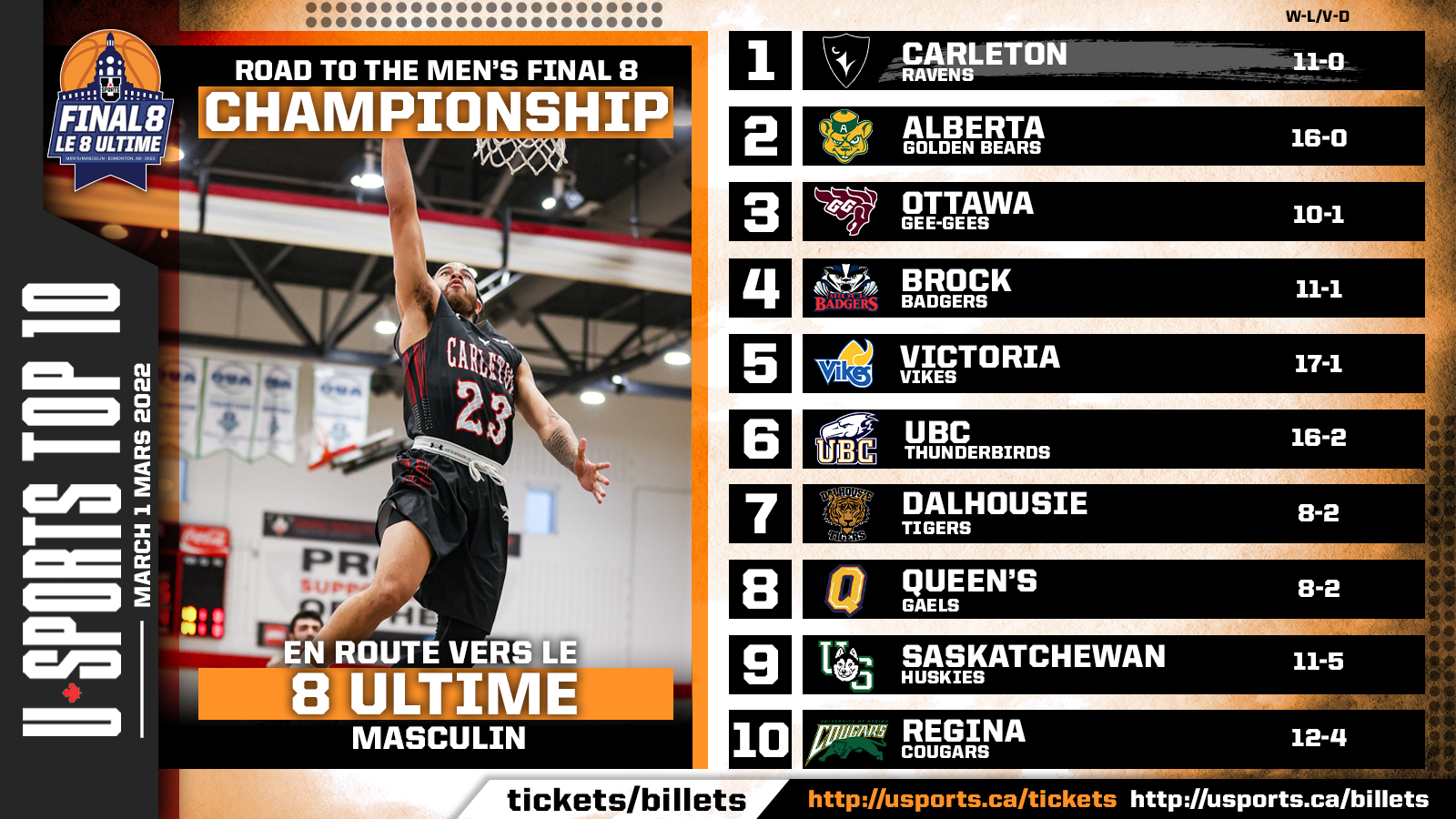 The UBC Thunderbirds remain the top seed in both men’s and women’s swimming as conference championships are around the corner.

In the RSEQ conference, the Ottawa Gee-Gees will play host from Mar. 3-5 as the best teams across Quebec and Eastern Ontario vie for gold. 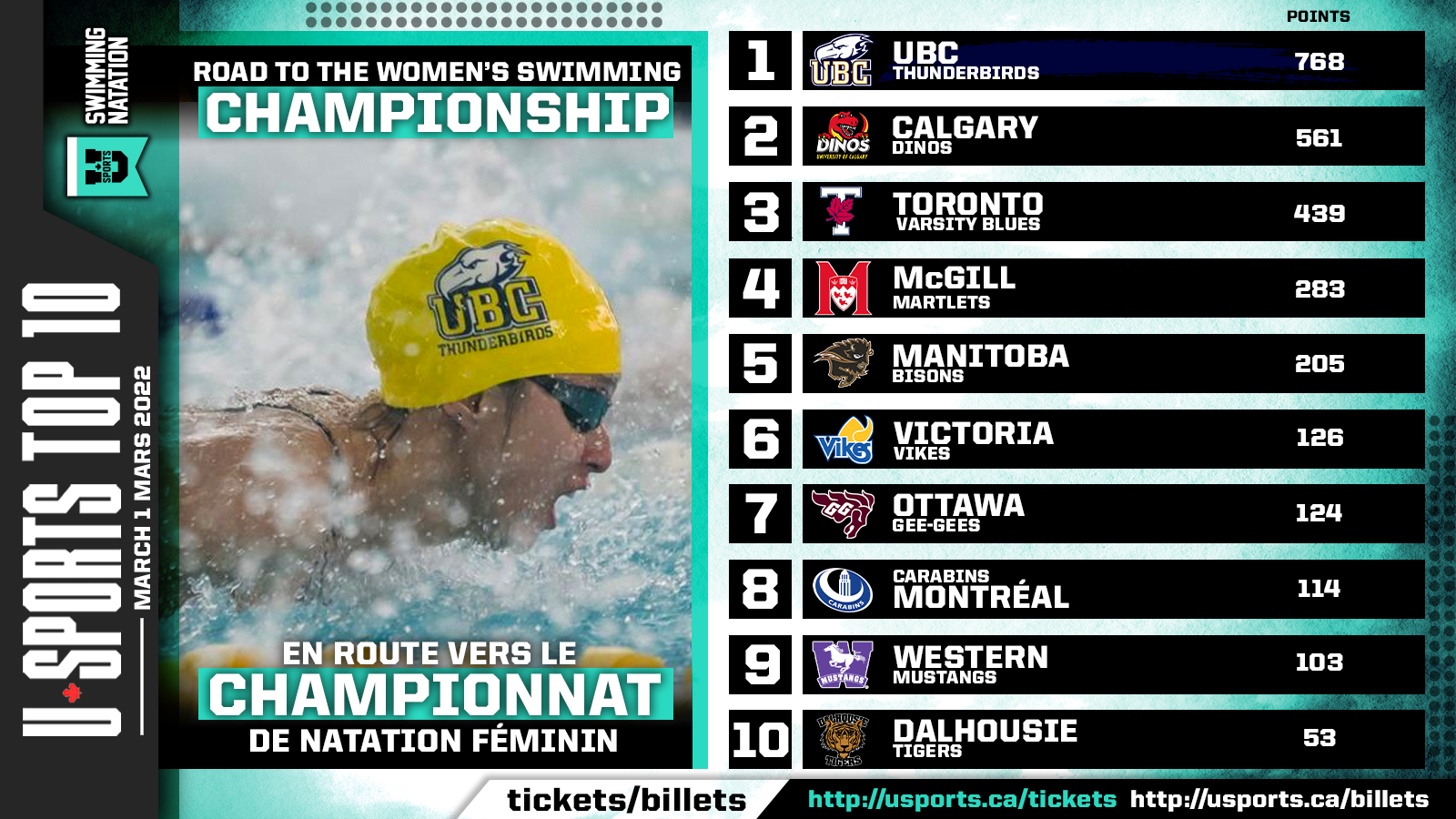 The OUA swimming championships will be hosted by the Toronto Varsity Blues from Mar. 10-12.

In the AUS conference, the Dalhousie Tigers will hold the AUS swimming championships from Mar. 11-13 as the best university swimmers from across the Atlantic will compete for the conference title. 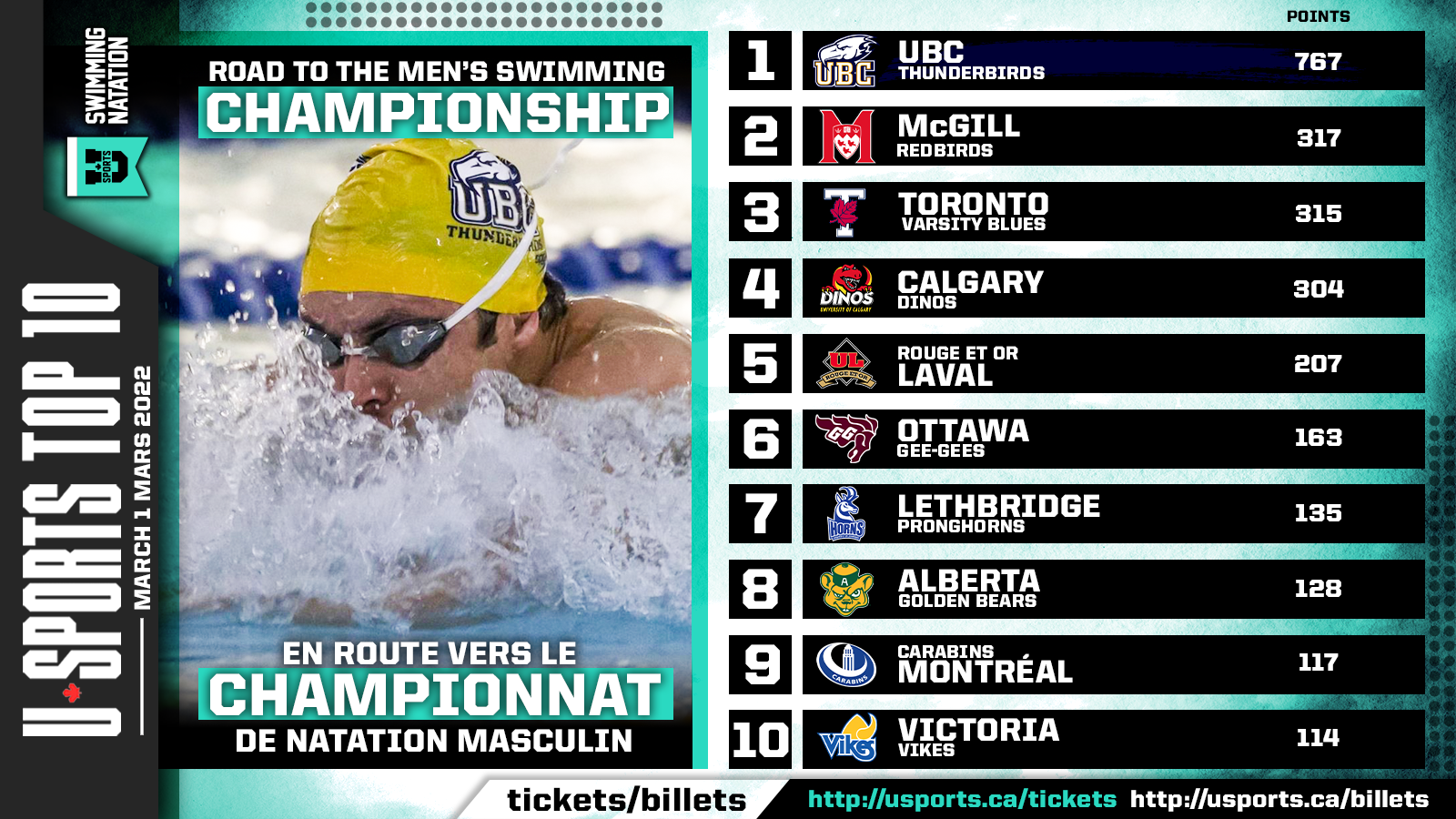 In women’s track and field, the Guelph Gryphons remain atop the rankings after an excellent showing at the Fred Foot Classic hosted by the University of Toronto.

Julia Agostinelli took gold in the 600m with a time of 1:39.33 in the finals. Agostinelli also ran to gold in the women’s 4x400m relay event, with the Gryphons posting a time of 4:07.65—over 10 seconds quicker than their closest competitors. 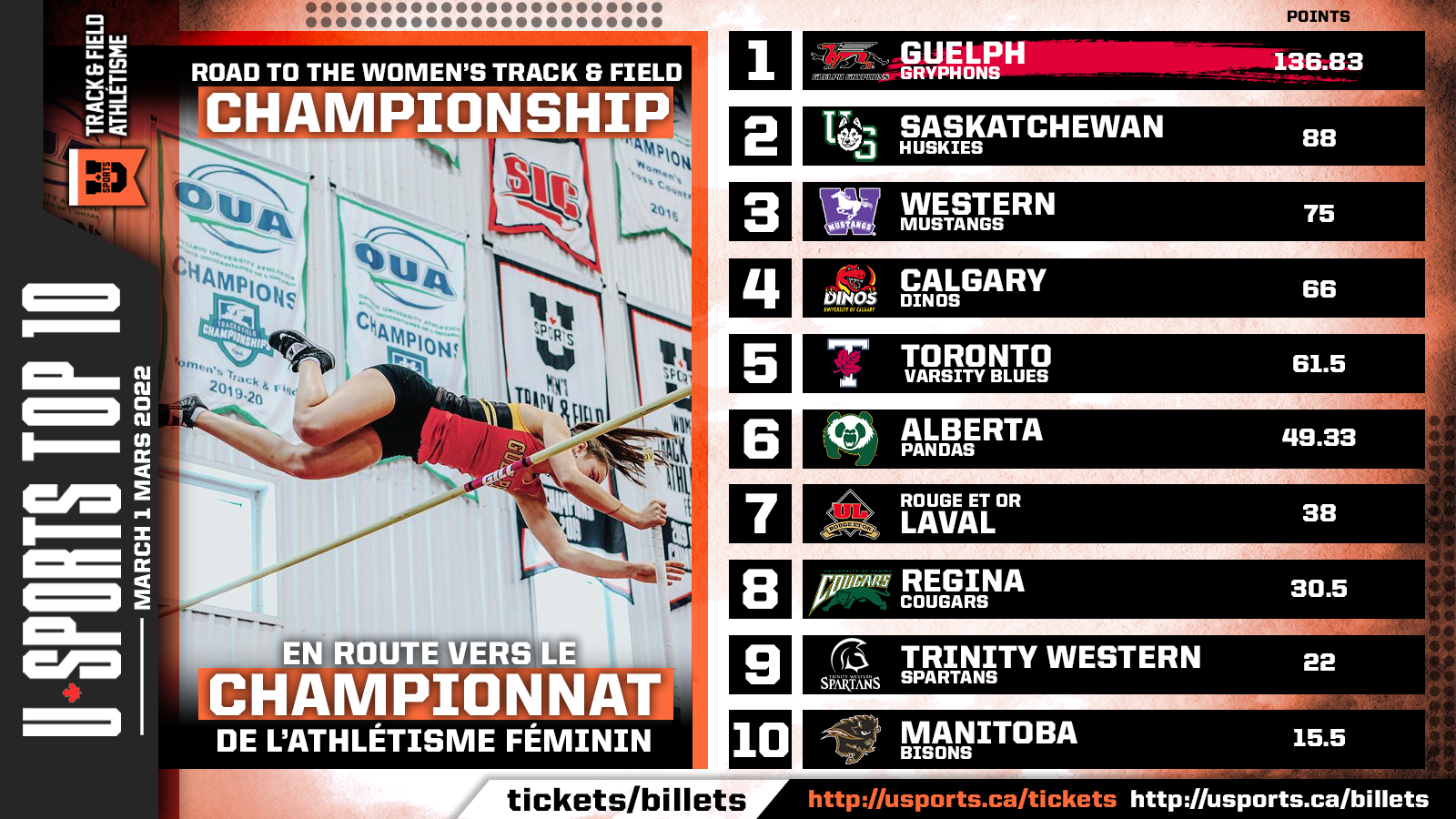 On the men’s side, the No. 1 Gryphons are still the top squad. The Gryphons’ dominance was on display in the 1000m race with Guelph taking the top four spots at the Fred Foot Meet. Adam Schmidt took gold home with a 2:28.00 time in the event.

The Gryphons will look to continue their momentum at the U SPORTS Track and Field Championships hosted by UNB from Mar. 31 to Apr. 2. 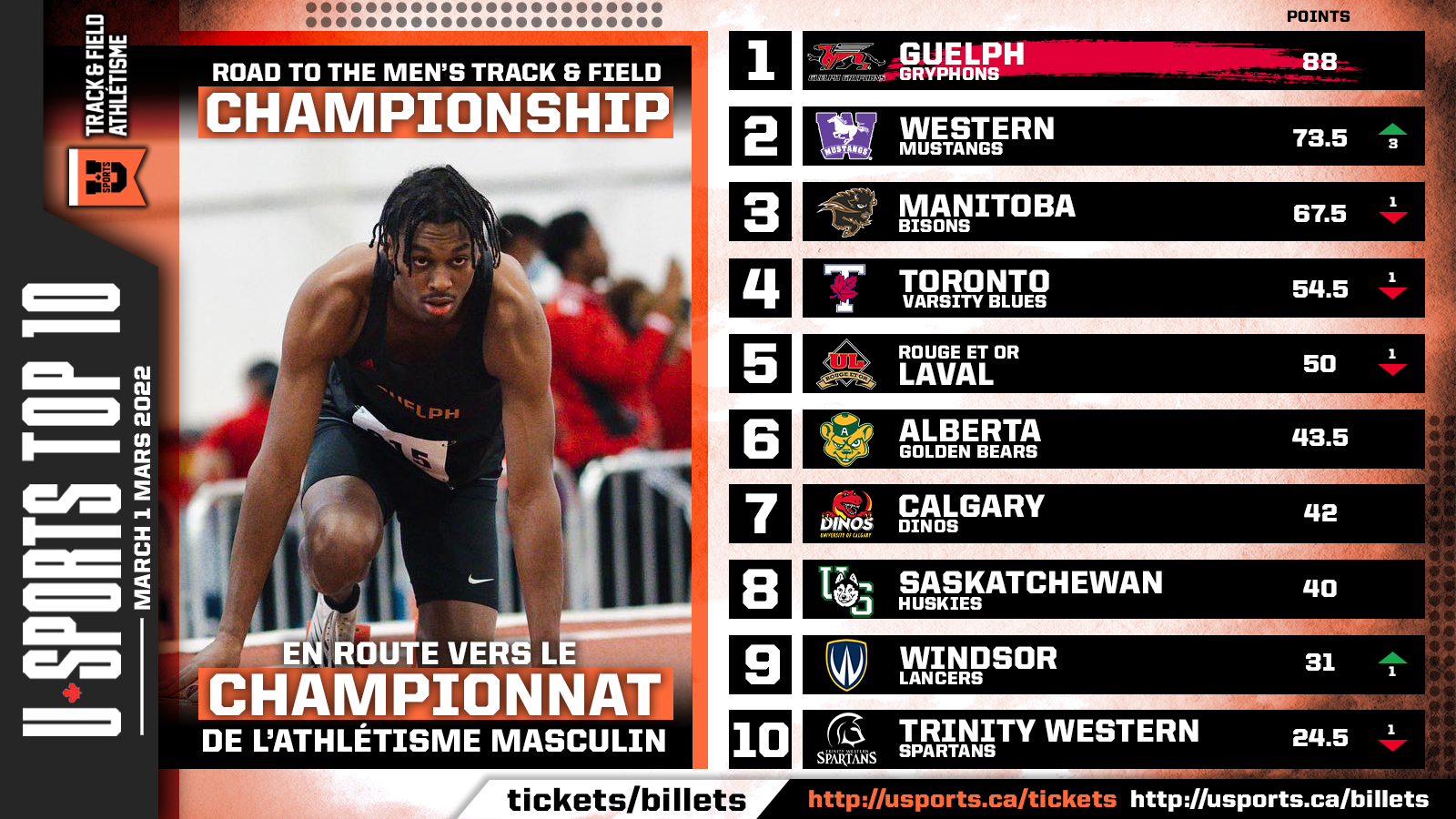