The Alberta Golden Bears men’s hockey team took the No. 1 spot after cruising to their 29th conference title in program history this past weekend.

The Golden Bears (20-4) cruised to a 7-0 victory over the No. 6 UBC Thunderbirds (16-9) to clinch their fourth Canada West banner in five seasons after defeating UBC 4-2 in game 1.

The Bears proved their dominance in the Canada West playoffs, going 4-0 and scoring a total of 23 goals while allowing just five throughout the postseason.

In the final, freshman Josh Prokop netted two goals and a pair of assists to help lead Alberta to a statement victory over UBC. 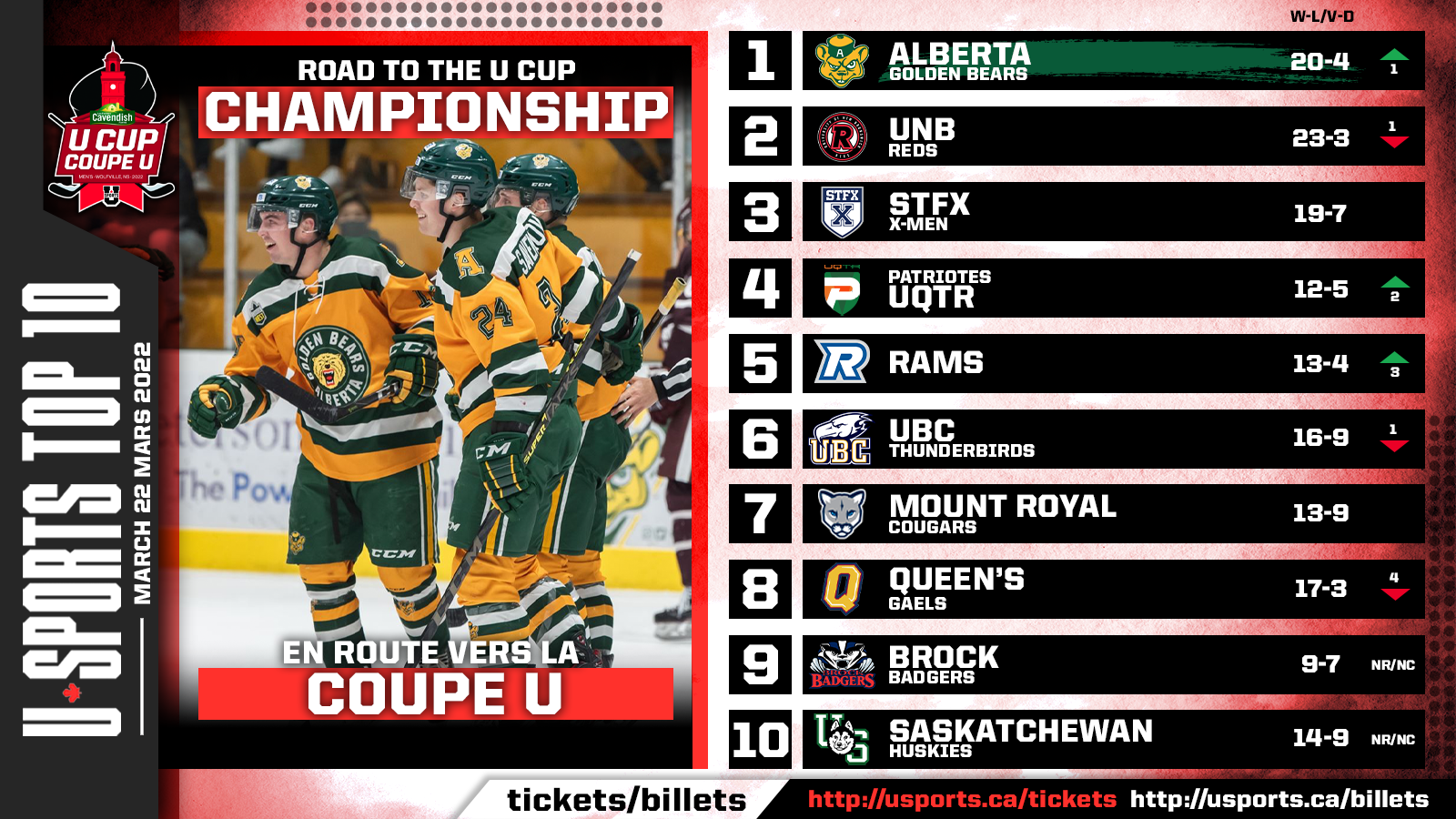 In women’s basketball, the No. 1 Saskatchewan Huskies (17-2) usurped the No. 2 Brock Badgers (13-0) for the top seed after claiming their fifth Canada West title in the last six seasons.

In the conference final, Saskatchewan defeated the No.4 Winnipeg Wesmen (17-3) 68-59 en route to the Huskies’ eighth CW title.

In the final, Carly Ahlstrom scored 22 points, going 7-12 from the field, including a trio of three-pointers. 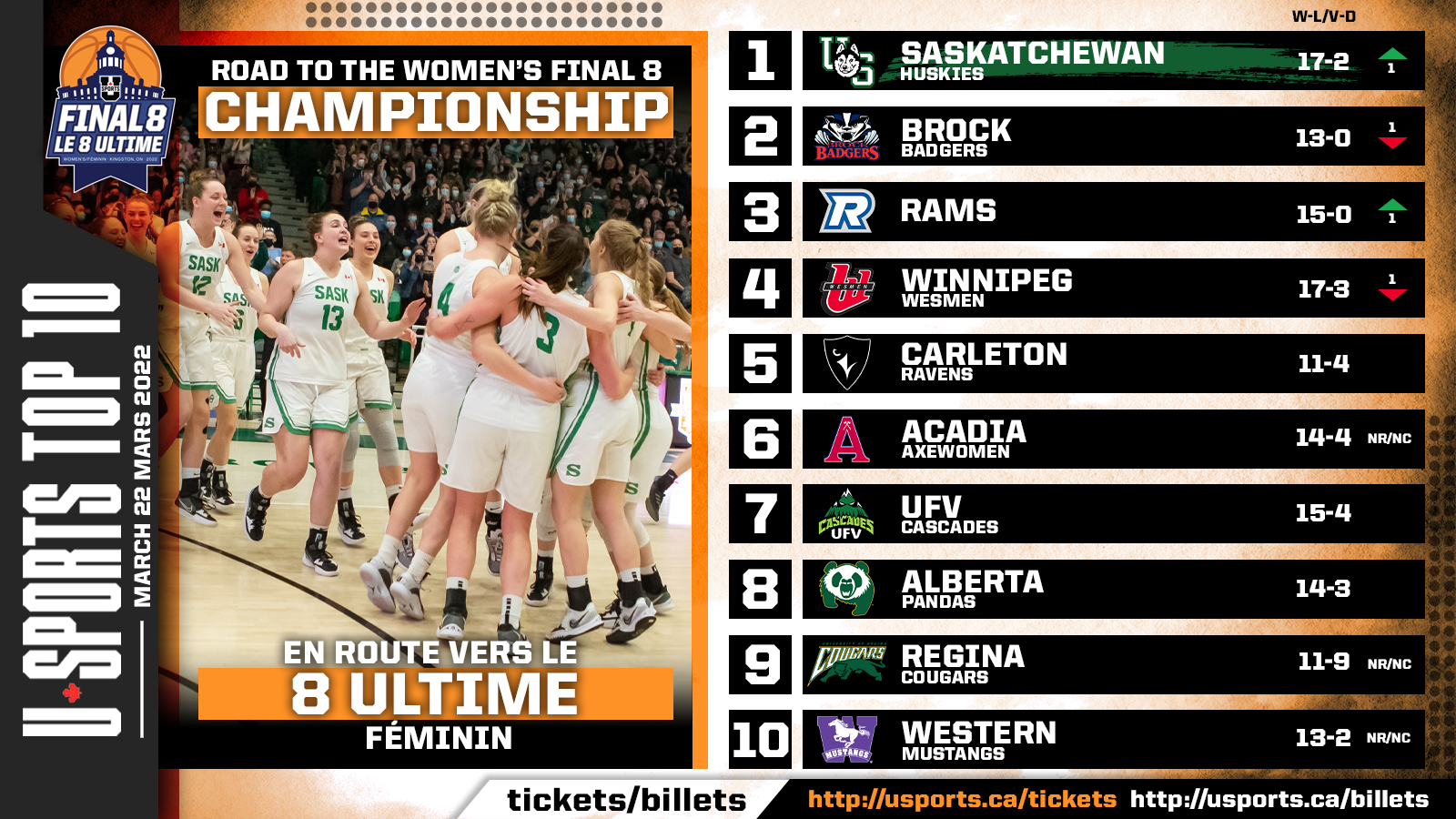 On the men’s hardwood, the Carleton Ravens (15-0) remains the No.1 seed in men’s hoops a position they’ve held from wire to wire. 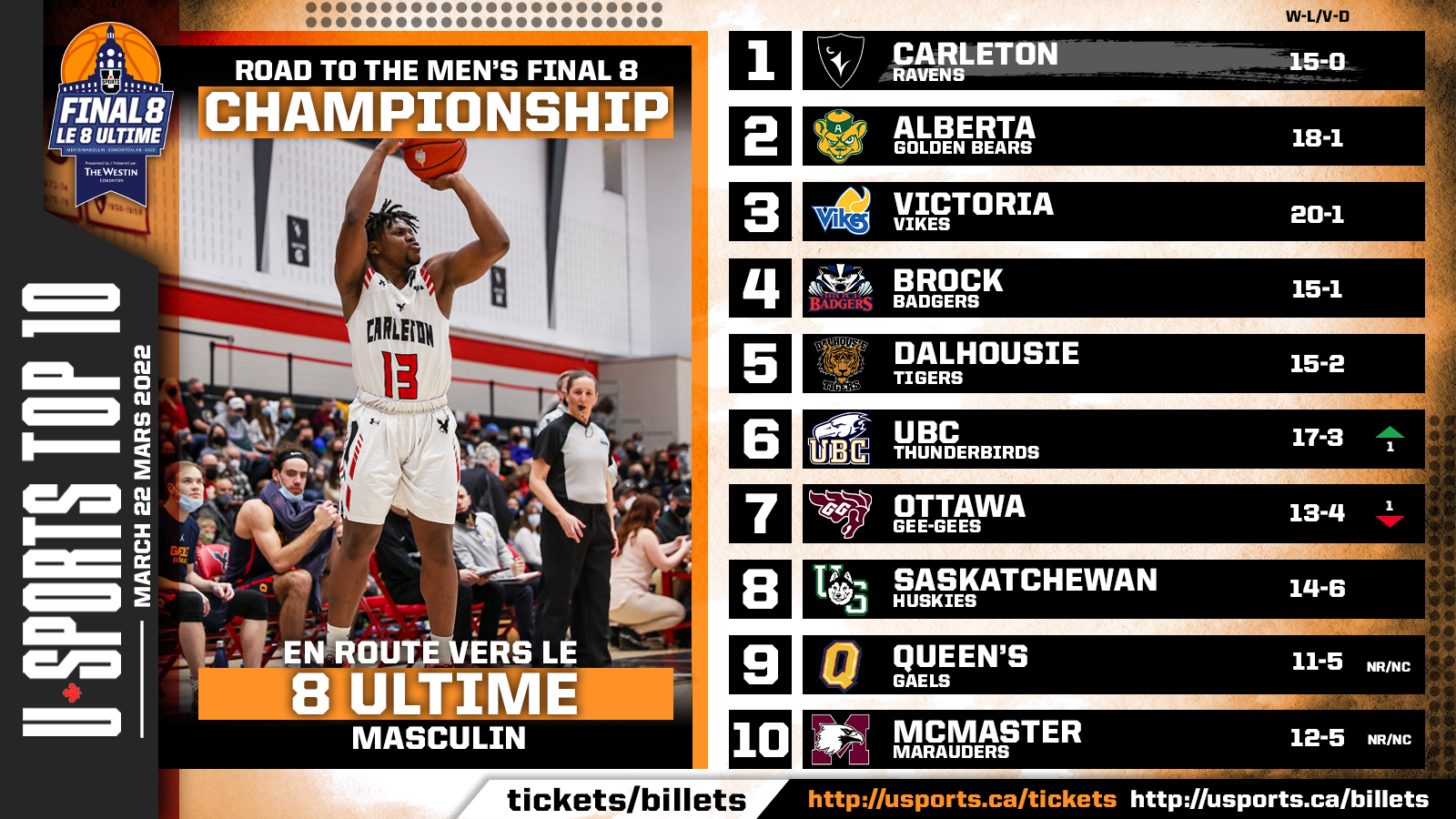 In women’s track and field, the Guelph Gryphons will maintain their top ranking as attention turns to the USPORTS championship, set for Saint John, N.B., from March 31-April 3. The Gryphons easily picked up the women’s team banner at last week’s OUA championship in Toronto, scoring 199.83 points, 55.5 points clear of second-place Western.

In Canada West, Saskatchewan picked up top honours at last week’s championship meet, with their 178 points well clear of Alberta’s 126.5. Meanwhile, in Sherbrooke, Que., Laval lapped the field as they scored an incredible 281 points, more than double second-place McGill’s total of 137. At the AUS championship, the Dalhousie Tigers cruised to their 32nd conference crown, scoring 138.5 points, more than 40 ahead of second-place UNB. 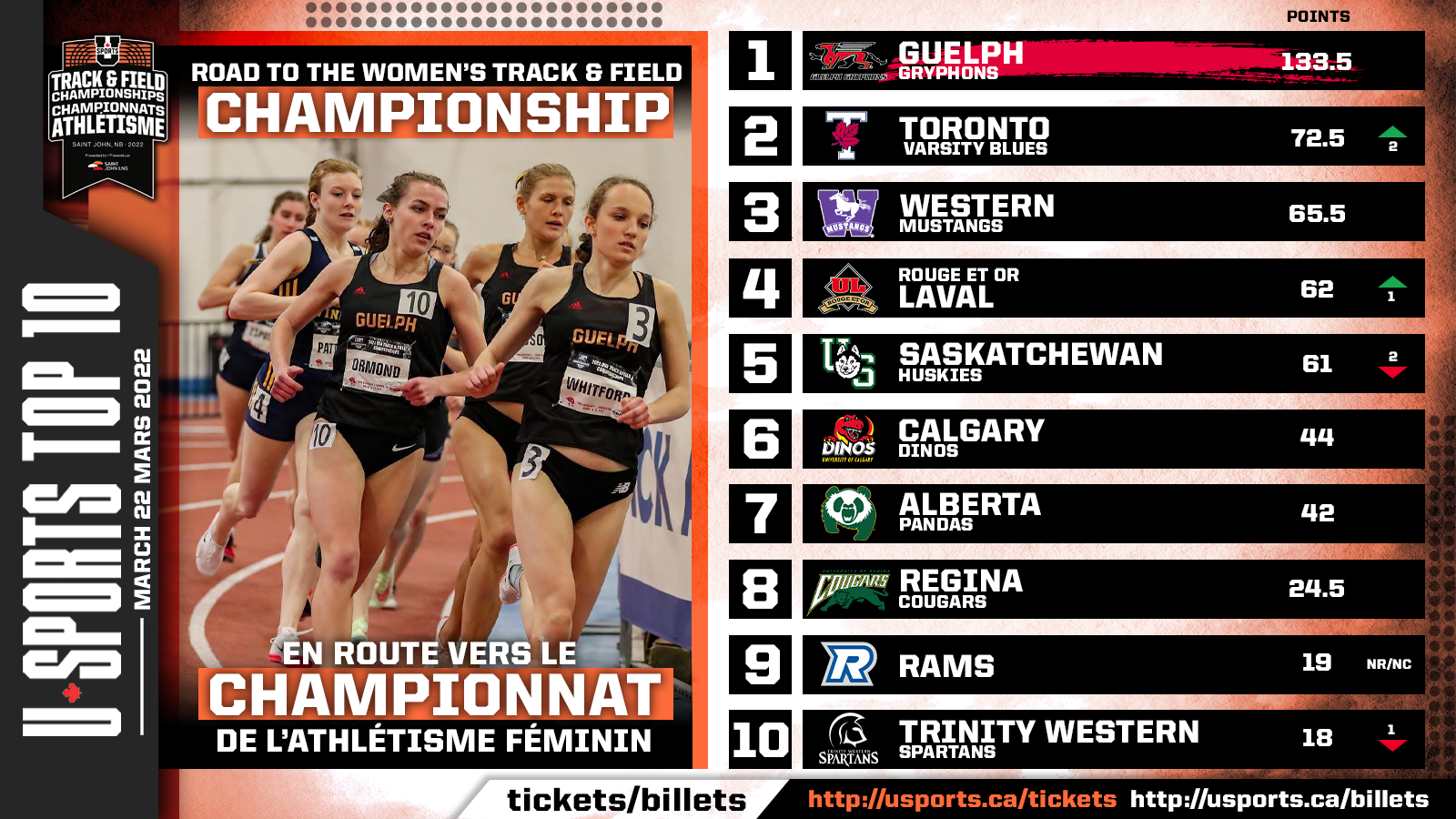 On the men’s side, the Guelph Gryphons will hold the No. 1 spot heading into the U SPORTS championship at the end of the month. They cruised to victory in last week’s OUA championship in Toronto, finishing with 182.5 points, 41 points ahead of No. 3 Western.

Elsewhere in conference championship action, the No. 4-ranked Manitoba Bisons claimed their first Canada West championship in 13 years, edging Saskatchewan 140 points to 126.5. In Sherbrooke, Que., No. 6 Laval put on a dominant display at the RSEQ championship, scoring 221 points, well ahead of McGill’s 143 points. In the AUS championship, the No. 10 Dalhousie Tigers took their 19th AUS title over the weekend with 138.5 points. 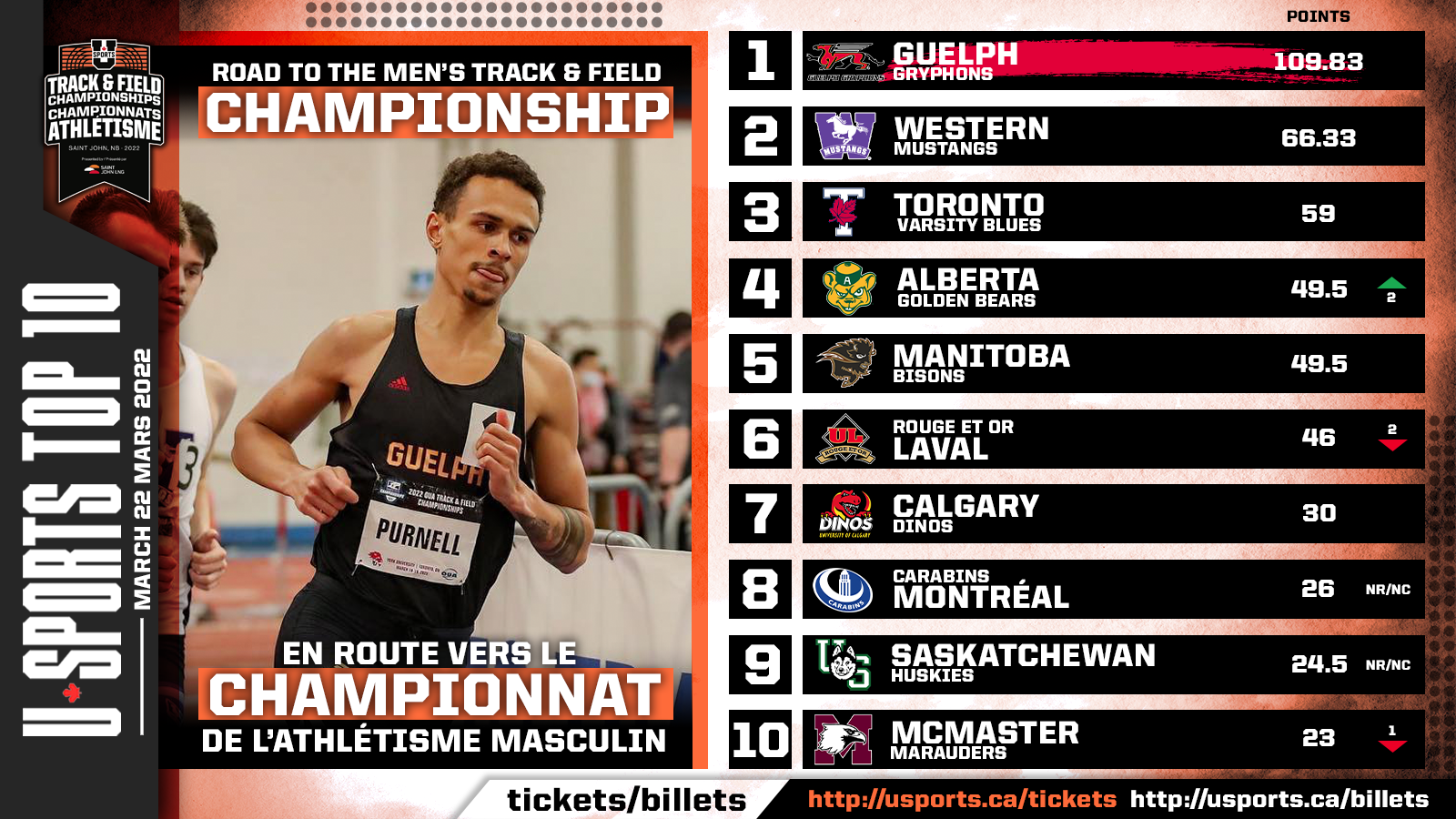 These are the final U SPORTS rankings for the 2021-22 season.